The first set was a competitive one, but Midland pulled away late in the set with a three-point rally. Maddie Wieseler had two of the kills for the Warriors in the run.

Krista Zenk and Brittni Olson recorded kills in the second set to give the Mustangs a short three-point lead. Kaelyn Giefer recorded a kill later in the set that gave the Mustangs their last lead in set No. 2, 24-23.

Wieseler and Maggie Hiatt ended the second set with kills.

Midland secured the sweep thanks to a 5-1 run in the third and final set.

Caitlin Makovicka led the Mustangs with 10 kills. Zenk and Giefer both had nine kills.

Wieseler scored 13 kills for the Warriors, and Hiatt chipped in with 12.

Briar Cliff improves to 12-7 on the season, surpassing their win total from last season, when the Chargers finished with 11 victories. They went on a 6-2 run to close the match after falling behind early in the fifth set. 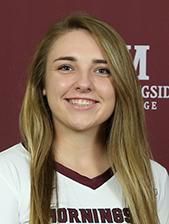