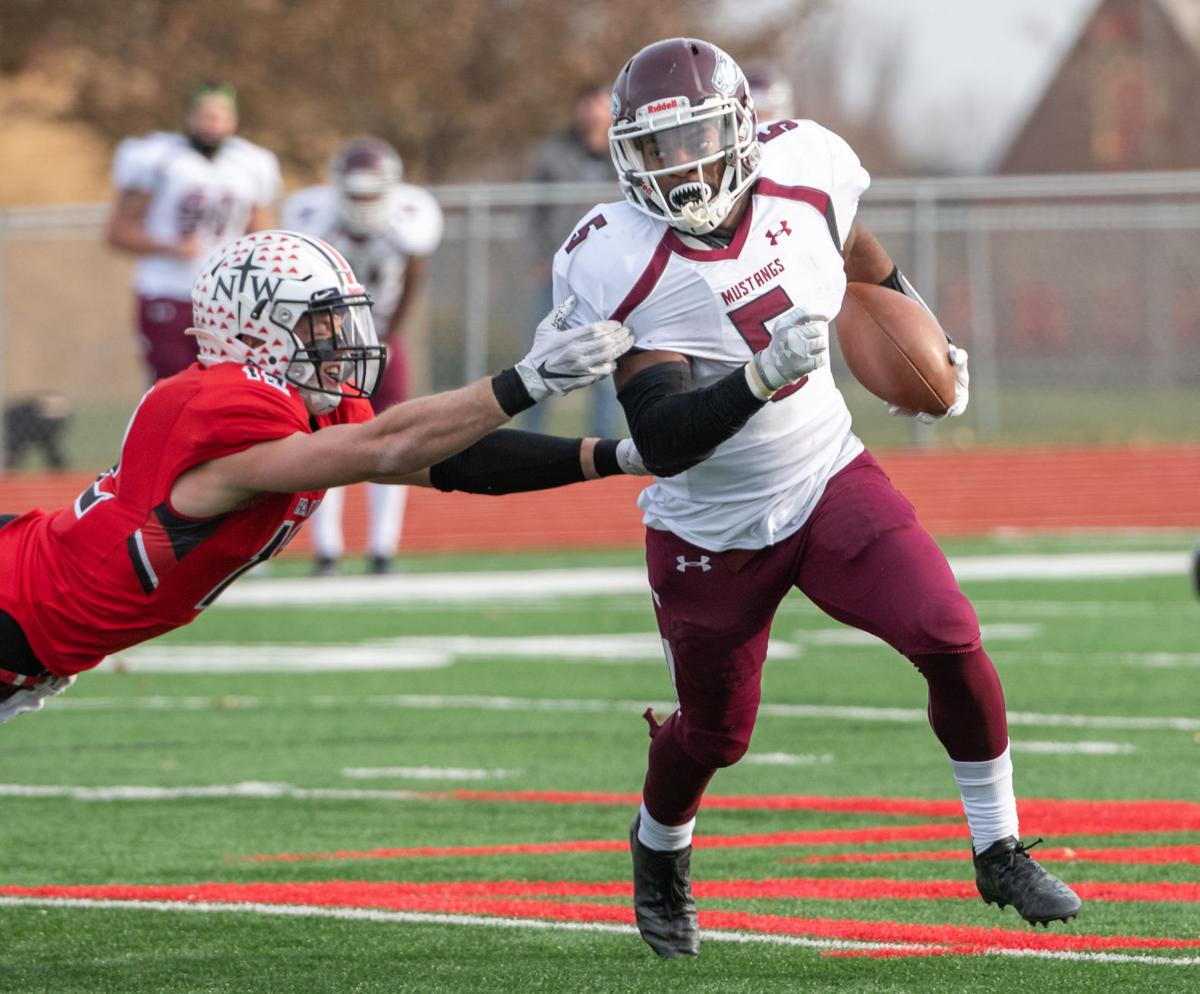 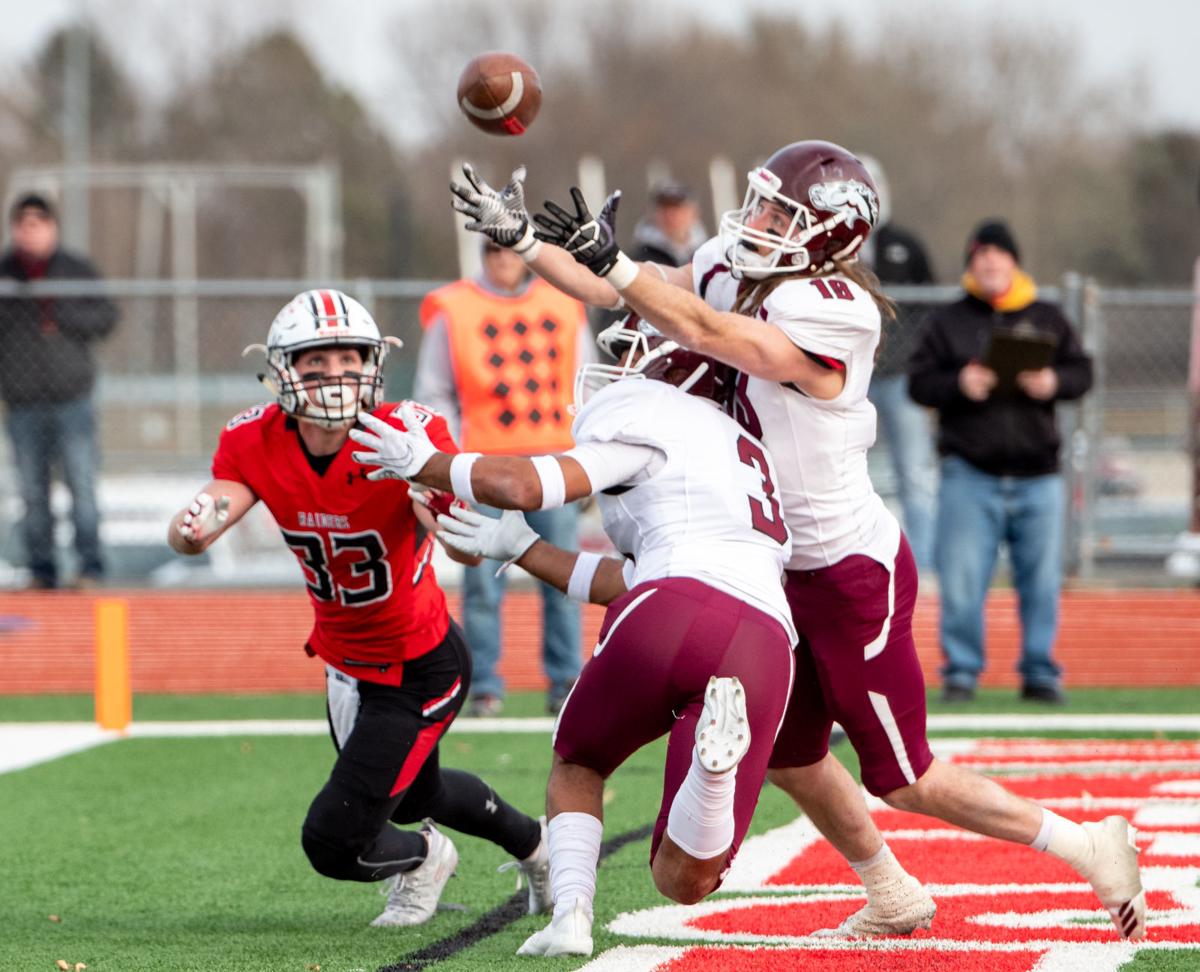 Morningside's Brady Holmes (18) reaches to catch a pass in the end zone as Deion Clayborne (3) holds off Northwestern's Shane Solberg in the second quarter on Saturday. Morningside defeated Northwestern 37-27 for the Great Plains Athletic Conference title in Orange City, Iowa.

The top-ranked and defending NAIA national football champion Mustangs completed an unbeaten regular season with a 37-27 victory over No. 5 Northwestern Saturday at DeValois Stadium/Korver Field.

Moreover, the Mustangs gained home field advantage throughout the NAIA playoffs, which get under way next week. First-round pairings will be announced on Sunday.

Arnijae “AP” Ponder broke loose for a career-high 232 rushing yards and Morningside won its 43rd consecutive GPAC game, dating back to late in the 2014 season.

Ponder, a junior, carried 28 times while Joe Dolincheck passed for 215 yards and three touchdowns. Morningside overcame a 13-10 halftime deficit by outscoring the Red Raiders 20-0 in the third quarter.

“This was a good football team we played against today and the guys had to work hard for it,” Morningside coach Steve Ryan said. “Every one (GPAC title) is special and every game is special, so I’m excited for our guys.”

Morningside earned the league’s automatic berth in the playoffs, but Northwestern (9-1, 8-1) is sure to receive an at-large berth.

The Red Raiders got another outstanding performance from junior quarterback Tyson Kooima, who passed for 348 yards and four touchdowns and rushed for 56 yards.

Northwestern, however, lost to the Mustangs for the third straight season on its home field after breaking for intermission with a three-point lead.

Morningside’s Chase Carter had plenty of distance on a 40-yard field goal at the 10:37 mark of the third quarter, tying the game at 13-13. The Mustangs then forced a punt and took the lead for good after one of a few quirky incidents in the contest.

On the first play after the punt, a Mustang receiver broke free over the middle and Dolincheck lofted what looked like a sure touchdown pass. But the receiver and one of the officials got tangled up and the player was tripped up.

However, on the very next play, Ponder found a hole and raced 56 yards for a touchdown.

A strong wind played a major factor and Northwestern got off just an 11-yard punt on its next possession, leaving the Mustangs in good field position at the Northwestern 45. It took just three plays before Dolincheck connected with Addison Ross for a 21-yard touchdown, making it 27-13 with 6:46 left in the third quarter.

Morningside tacked on another touchdown before the quarter ended and Austin Johnson hauled in his second scoring pass late in the contest. Carter also kicked field goals of 28 and 23 yards.

Northwestern had a couple more scoring chances in the first half, but Steven Evans intercepted a pass in the red zone and Klayton Nordeen picked one off in the end zone.

The Mustang defense shifted momentum in the second half and the offense took advantage.

“We just kept following our rules, our coach told us what we needed to do all week and we just kept doing what he told us to do,” said Morningside linebacker Jacob Katzer. “Nothing changed really, we just kept playing how we needed to play, stayed calm and good things happened.

“We’ve all played on big stages and seen crazy things happen. What we’ve learned through all that is it’s just football and you just keep focusing on the play you’re on and it leads you to success.”

Ryan said the message was simple at halftime.

“We made some adjustments and right before we took the field I said al right guys, let’s go play Mustang football,” Ryan said. “They knew what they wanted to do and the game was big enough.”

Ponder, the leading rusher in the GPAC and ranked fourth nationally, finished the regular season with 1,427 yards and 19 touchdowns after the best single-game performance of his collegiate career.

“It was really just my teammates, the o-line giving me good looks and the blocking up front,” Ponder said. “The seniors came up with this thing called dominate the day and that’s what we came here to do. We knew those guys were going to be good but we were just going to be the better team and fight until the end.”

Northwestern managed just 137 rushing yards and Kooima spent a lot of time trying to elude a relentless Mustang pass rush. Kooima wound up throwing 53 passes and completing 27, three of those to Cade Moser for touchdowns.

“I thought our guys battled and were really focused,” McCarty said. “We didn’t take advantage of some opportunities we had in the first half and ultimately that came back to bite us. We let a really good football team hang around and they took advantage of it.”

Look back: Relive every Morningside win en route to another NAIA title game

Enjoy some of the best moments from the Mustangs' undefeated run to the NAIA football championship game. Which win most impressed you?

Morningside gets No. 1 seed; Northwestern also gets home game in NAIA playoffs

It's the 16th consecutive postseason appearance for the defending champion Mustangs. Northwestern fell to No. 8 after losing 37-27 to Morningside on Saturday.

Morningside's Brady Holmes (18) reaches to catch a pass in the end zone as Deion Clayborne (3) holds off Northwestern's Shane Solberg in the second quarter on Saturday. Morningside defeated Northwestern 37-27 for the Great Plains Athletic Conference title in Orange City, Iowa.