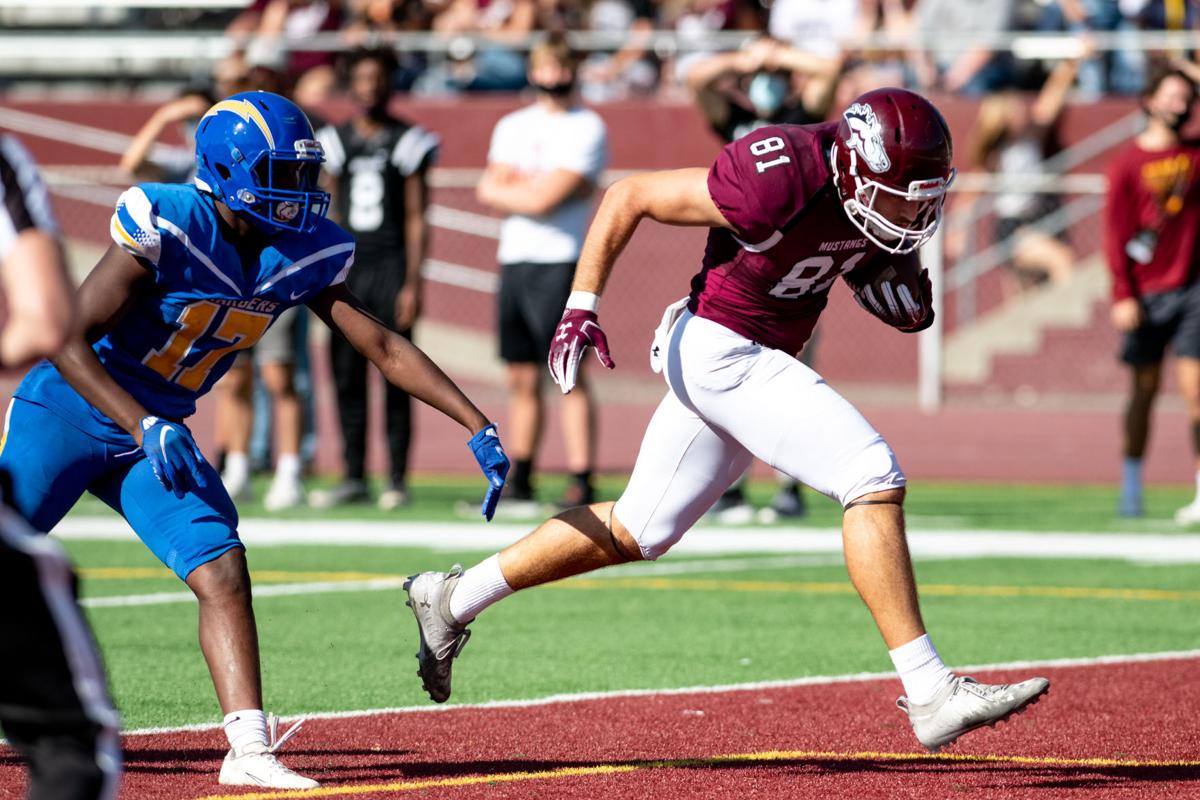 The previous two seasons have ended with a national championship and the 2017 season ended with a semifinal loss to Saint Francis.

When Ryan addressed his men on Wednesday, everyone knew there was a set ending to the fall portion of the schedule, as the playoffs will be played in the spring due to the COVID-19 pandemic.

That ending to the fall portion of the season comes Saturday, as the Mustangs  host Hastings (2-6) for a 1 p.m. game at Elwood Olsen Stadium.

“We just haven’t really talked about that, and we focus on what it is,” Ryan said. “It was kind of odd for me. After practice (last Wednesday), I told them that we had four full practices left this fall. Let’s see what we can accomplish. I haven’t given a talk like that in ages.

“When you’re in the playoffs, you just never know when the end is going to come,” Ryan said. “Of course, the last two years, this is what we’ve worked for. It’s just a unique situation.”

Ryan admitted how unique the situation was. After the Mustangs finish off the fall season Saturday against the Broncos, Morningside will take some time off before starting its third playoff run during the spring.

The playoffs were moved to the spring due to the COVID-19 pandemic.

“It’s a very unique year,” Ryan said. “We have this end coming up, and it’s so unique, and at the end of the season, all these seniors are going to be gone, and ‘Let’s go play for them.’ We’re not even going to have that aspect. It’s just a strange year.”

Ryan’s main message to the Mustangs this week is to finish out the regular season strong and to take things one day at a time.

The Mustangs didn’t learn until last Friday that their regularly-scheduled game last Saturday against Doane was postponed on Friday, then they found out this week that it was canceled and that the game was ruled a no-contest.

Morningside has spent the week like it usually has since Ryan first became the Mustangs coach: Prepare for the team next up on the schedule.

“We’re working on getting better and there’s things that we can’t control,” Ryan said. “We can’t control COVID. We can control what we can control and basically I told them, ‘You beat Hastings, you’re undefeated, you’re conference champs.’ We’re just keeping going with that.”

Ryan said that the Mustangs have done a fantastic job turning the page from last week to this week. He liked the energy his players brought to practice throughout the week.

Ryan admitted he had some concerns whether the Mustangs would be focused and energized, given that this hasn’t been the first time Morningside has had changes to its football schedule.

The Mustangs’ game against Hastings scheduled for early in the fall was postponed.

Ryan wants the Mustangs to end on a high note, so there’s some optimism heading in and out of the holiday break. He wants Morningside to exit the fall phase strong so that the Mustangs can continue in the spring with that same momentum.

The Mustangs simply hope to play their best game of the year come Saturday.

Morningside has won all seven of its games this season. Most recently, Morningside defeated Concordia 56-22 on Nov. 7.

“I think this group has been extremely resilient,” Ryan said. “They haven’t slipped up yet. They haven’t let up at any point. They have to do it one more week.”

Hastings has two wins on the season: The season-opener on Sept. 12 against Dakota Wesleyan (42-7), then the Broncos beat Jamestown on Halloween by a score of 30-7.

In their last two losses, however, Hastings has been outscored 127-10 by Northwestern and Dordt.

“There’s some struggles going on, and on film, I see a lot of different players week in and week out,” Ryan said. “You don’t know how much is that due to injury or due to COVID. They have a talented defensive line and front seven.”

“He’s as talented as any receiver in the league, and that’s saying something, because this league is full of talented receivers,” Ryan said.

AMES — Iowa State has had a historic season to this point.

The Red Raiders have rolled since an early September loss to Morningside, with only a single one-score game in that span.

Watch the freshman's game-winner that propelled the Mustangs to a 79-77 victory.

It was a special 2019-20 campaign for the University of South Dakota women’s basketball team but it ended in about one of the biggest ‘What If’s?’

USD women hang with but fall to No. 1 South Carolina

WATCH NOW: Morningside's Will Pottebaum finally gets his game-winner

Zach Imig tried to call a set play, but it didn't come together. So Pottebaum fired a fadeaway jumper that bounced and rolled before finally going in.

No shortage of motivation for Iowa, Nebraska

Motivation won’t be an issue Friday when the football teams from Iowa and Nebraska renew acquaintances at Kinnick Stadium.

IOWA CITY – Three minutes into the third quarter Friday afternoon at Kinnick Stadium, Iowa’s football team was struggling with a bit of an ide…