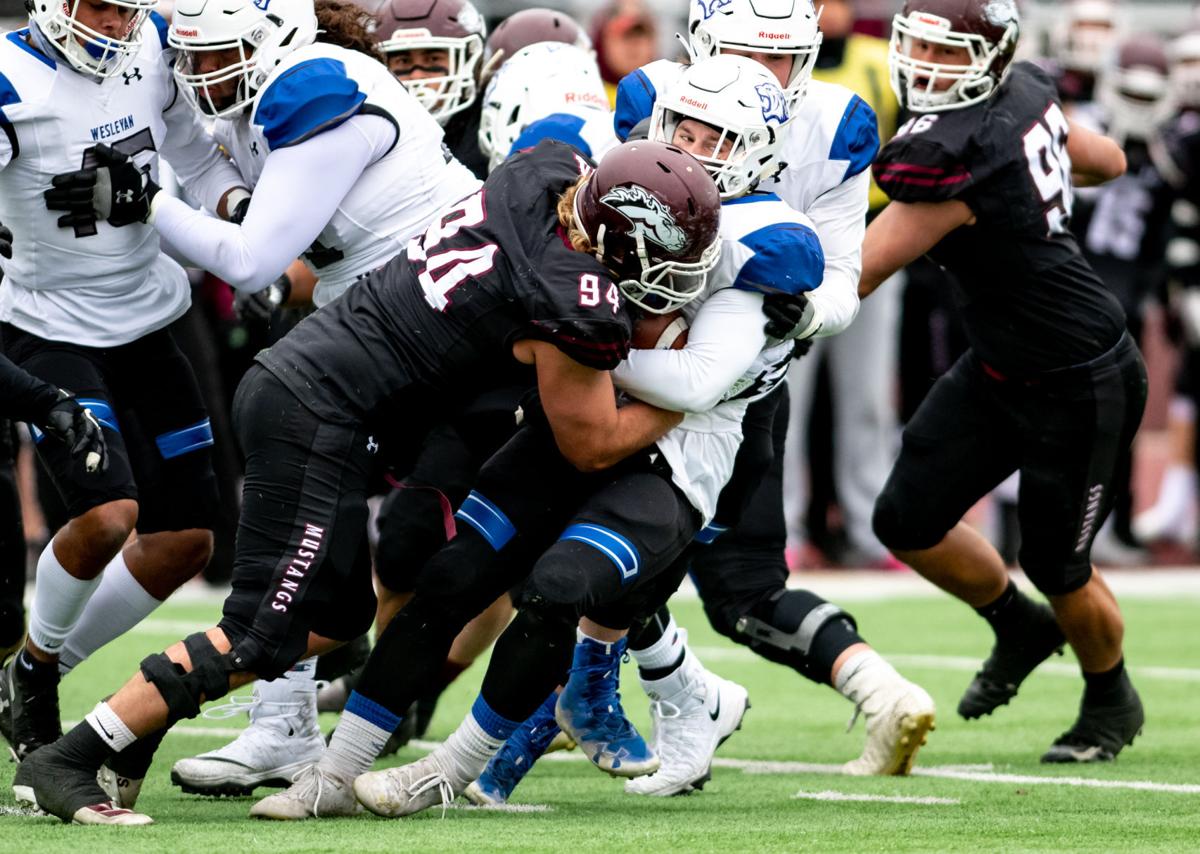 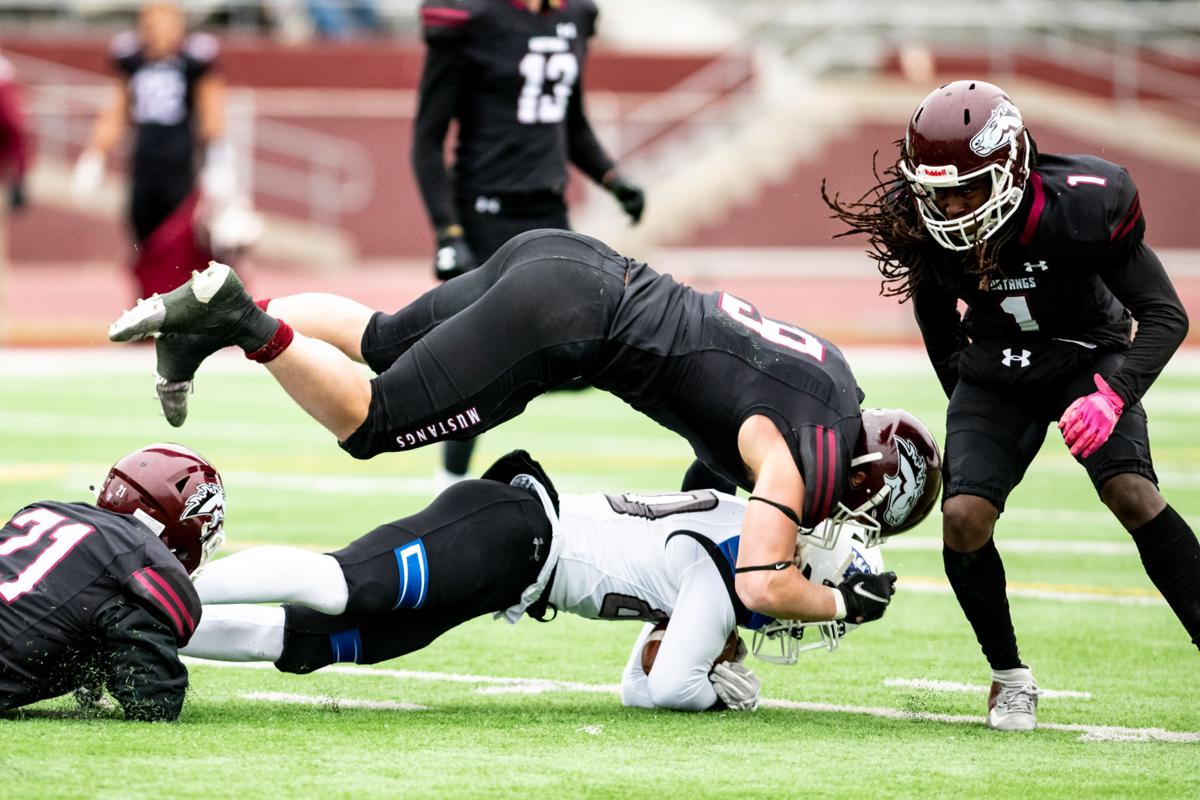 Two-time defending NAIA national champion Morningside came away with a 56-21 win at chilly Olsen Stadium, but it was just a 14-point game at halftime and the Dakota Wesleyan offense did its share of damage.

DWU’s Zach Lester passed for 305 yards and two touchdowns. That’s when he wasn’t being bowled over by the Mustang defensive front, which recorded seven sacks.

Zack Keller, a 250-pound senior from Wilber, Nebraska, was the main instigator with 3.5 sacks and 4.5 tackles for loss. Niklas Gustav added 1.5 sacks and moved into a tie for second on the school’s all-time list with 21.

“We did pretty well upfront,” Keller said. “They came out and had a good game plan and got a lot of yards on us, especially in the first half.

“But we made some adjustments and upfront I think we did pretty well. They were throwing the ball quick.” 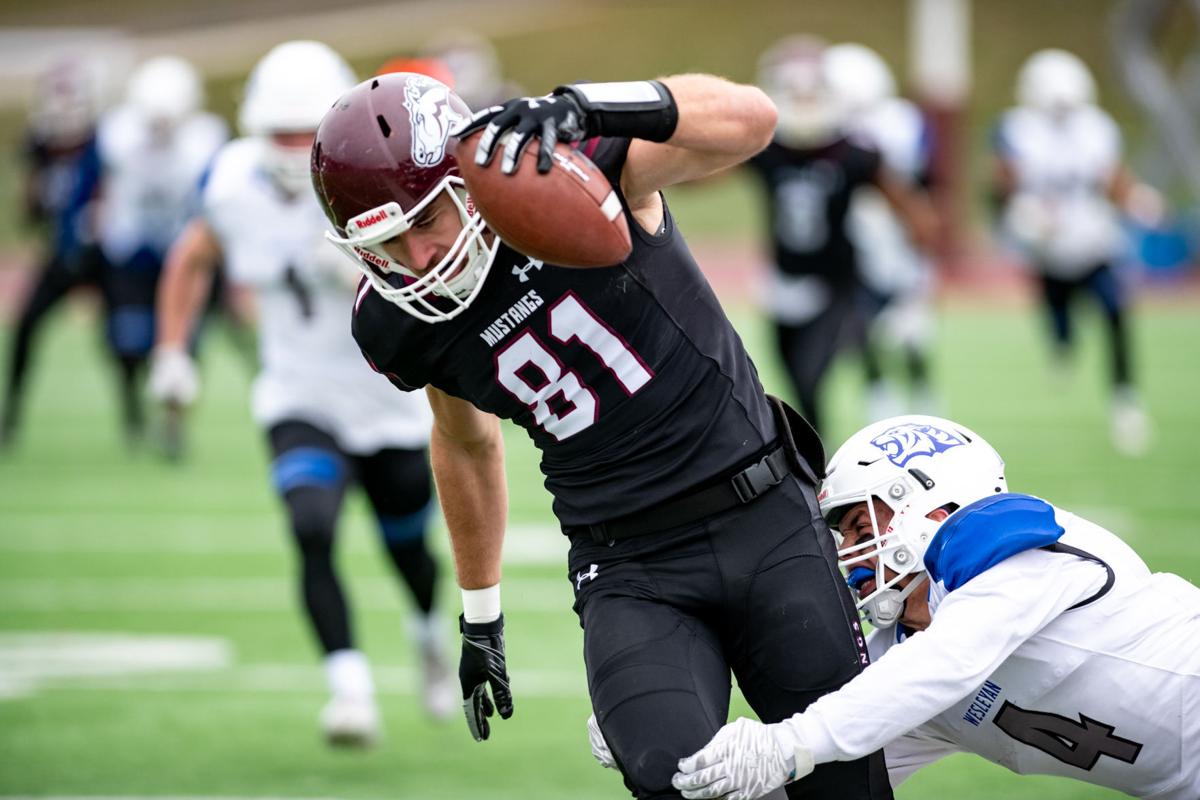 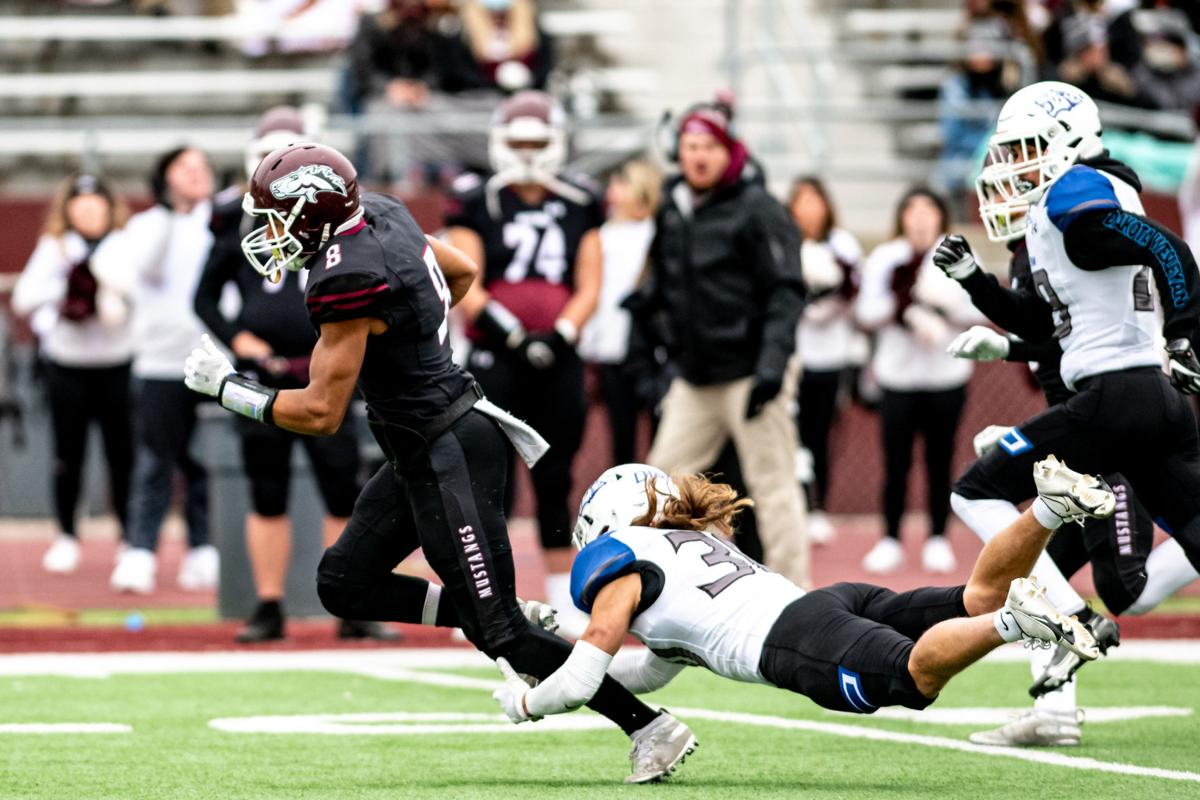 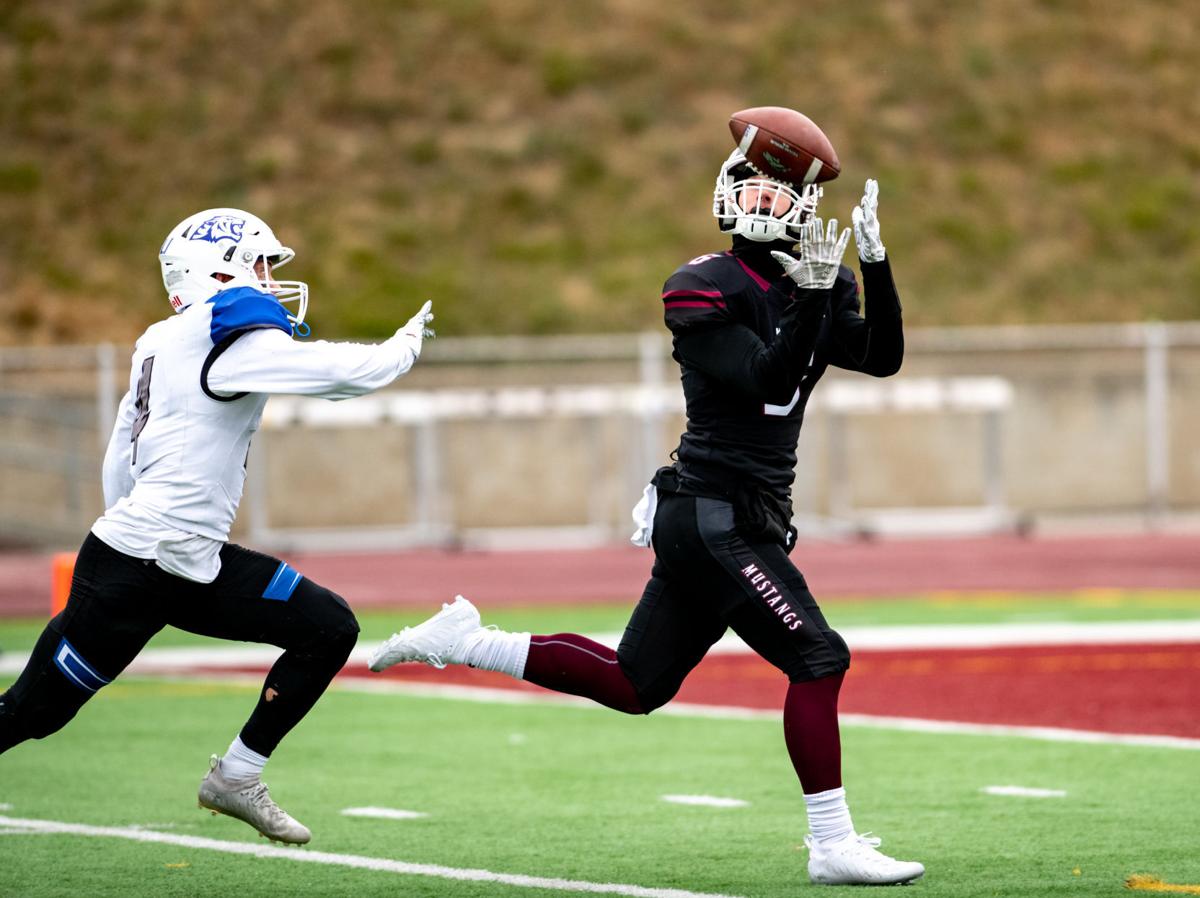 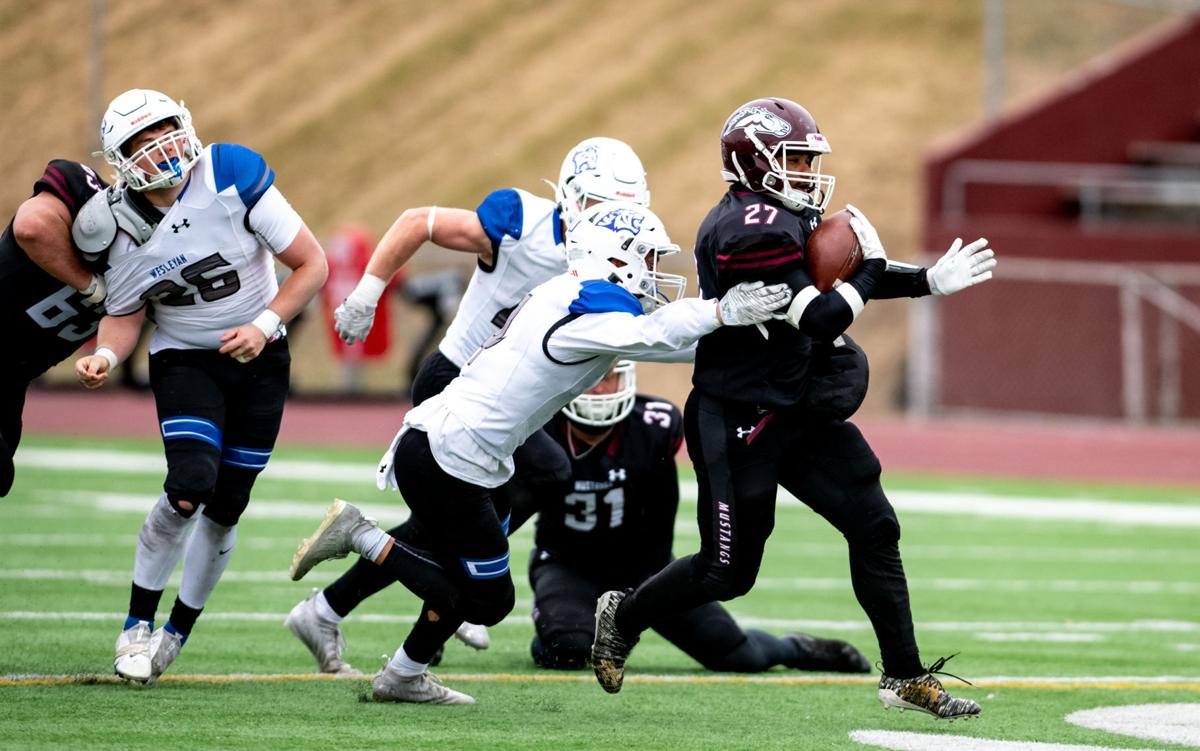 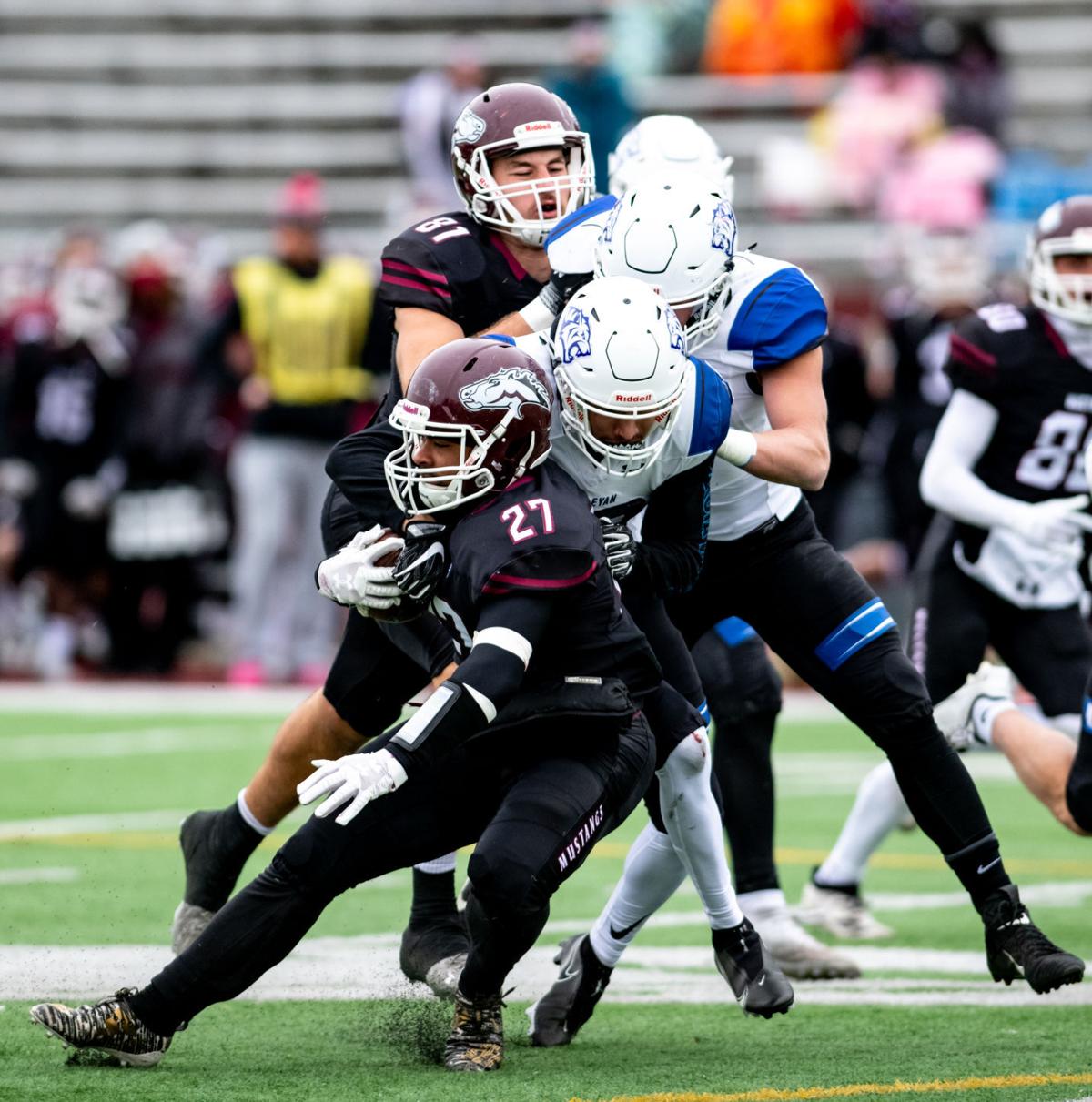 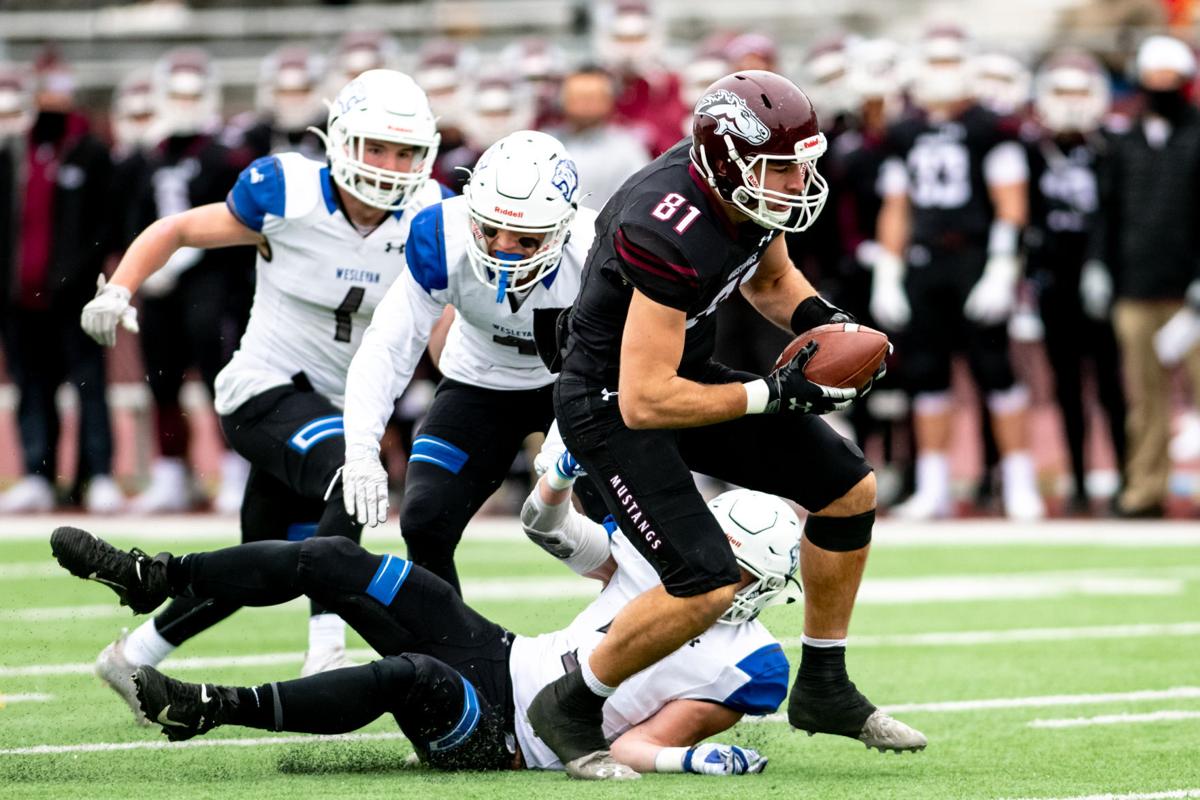 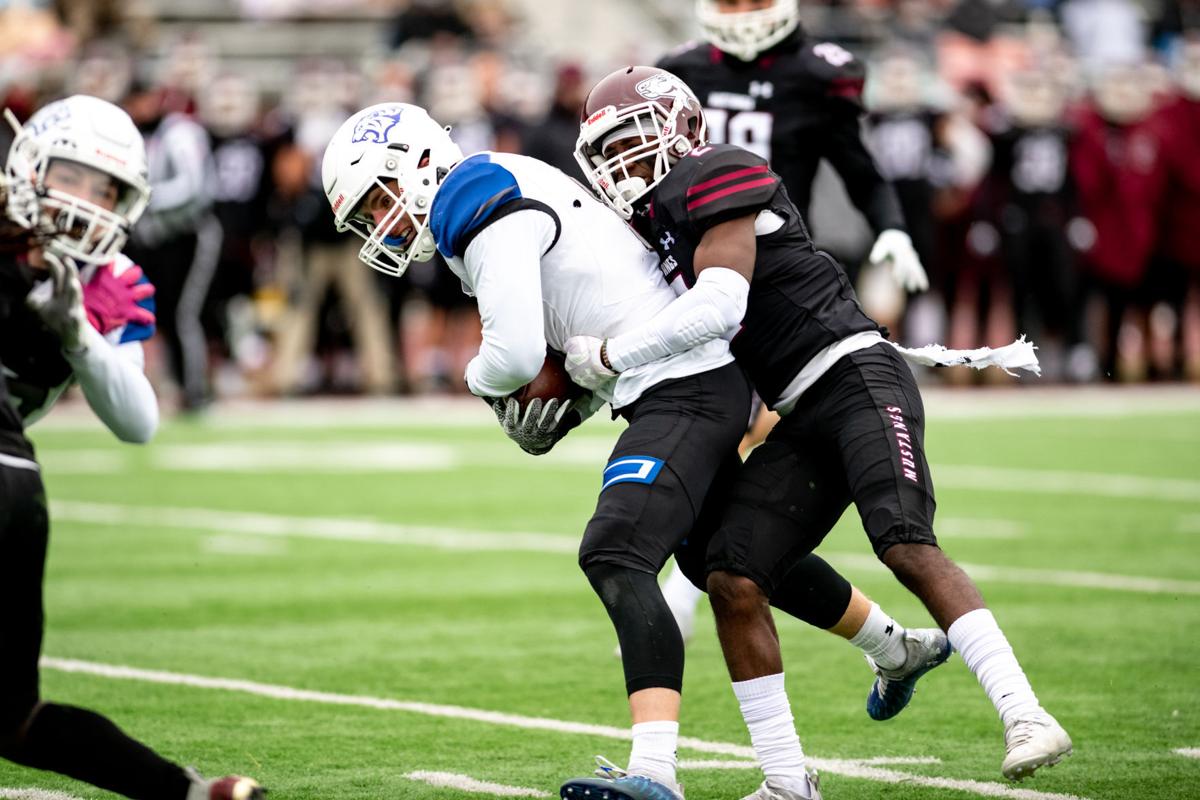 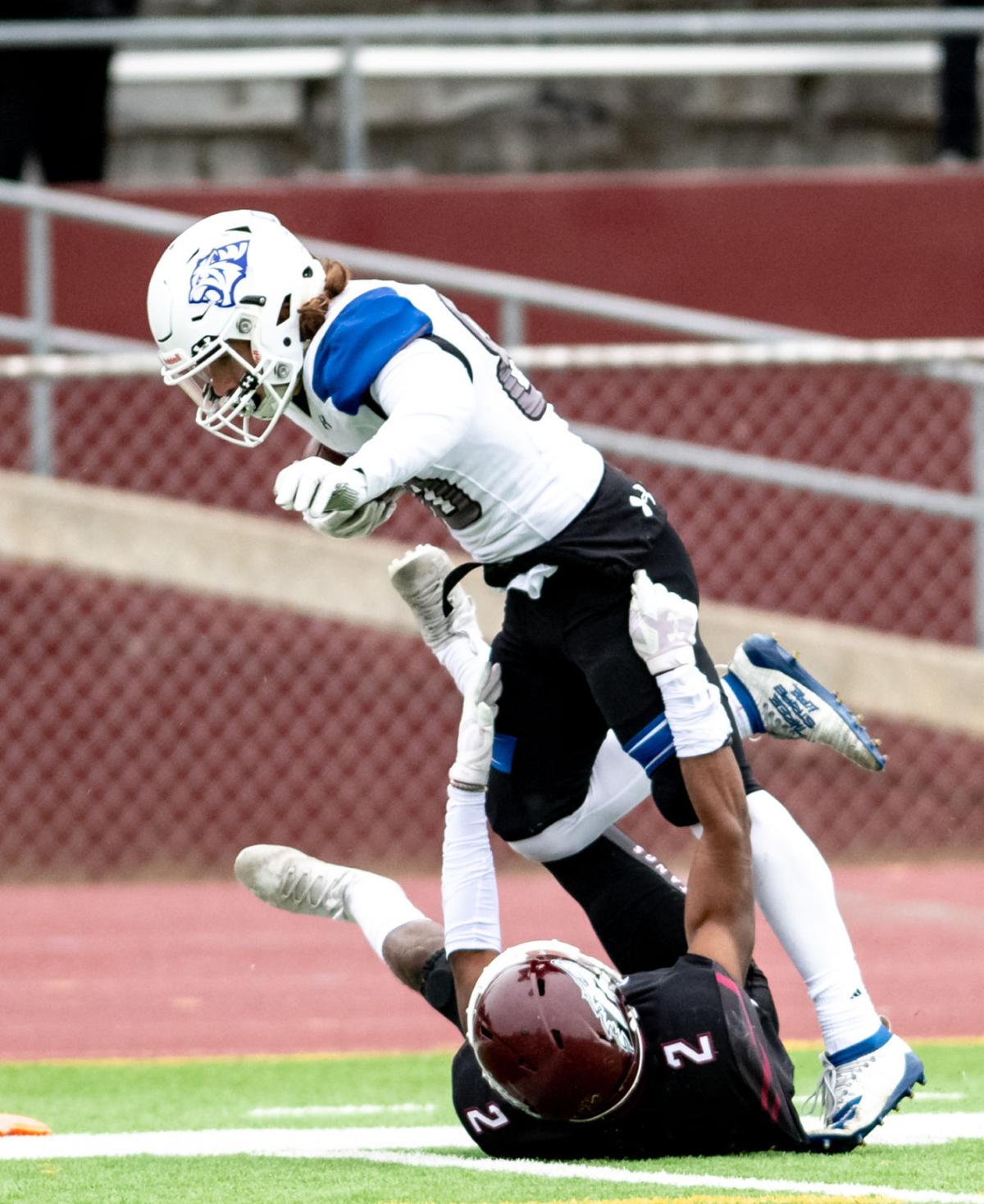 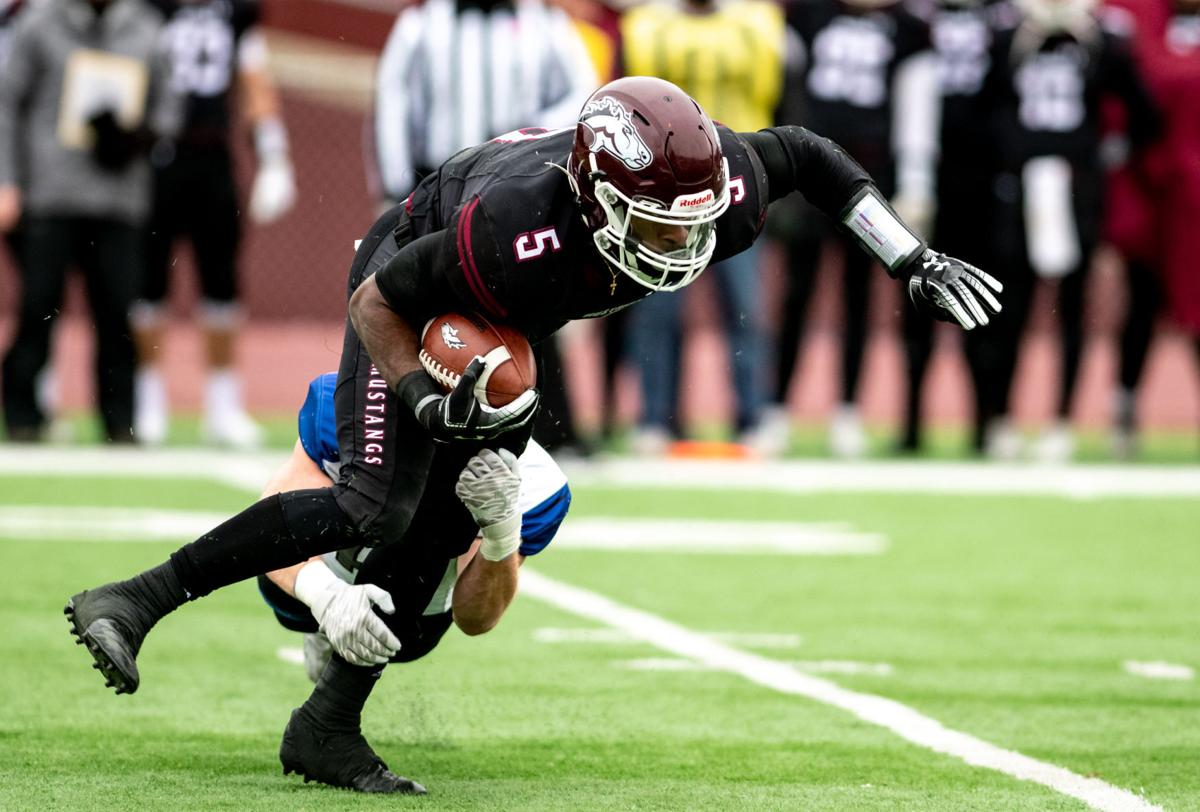 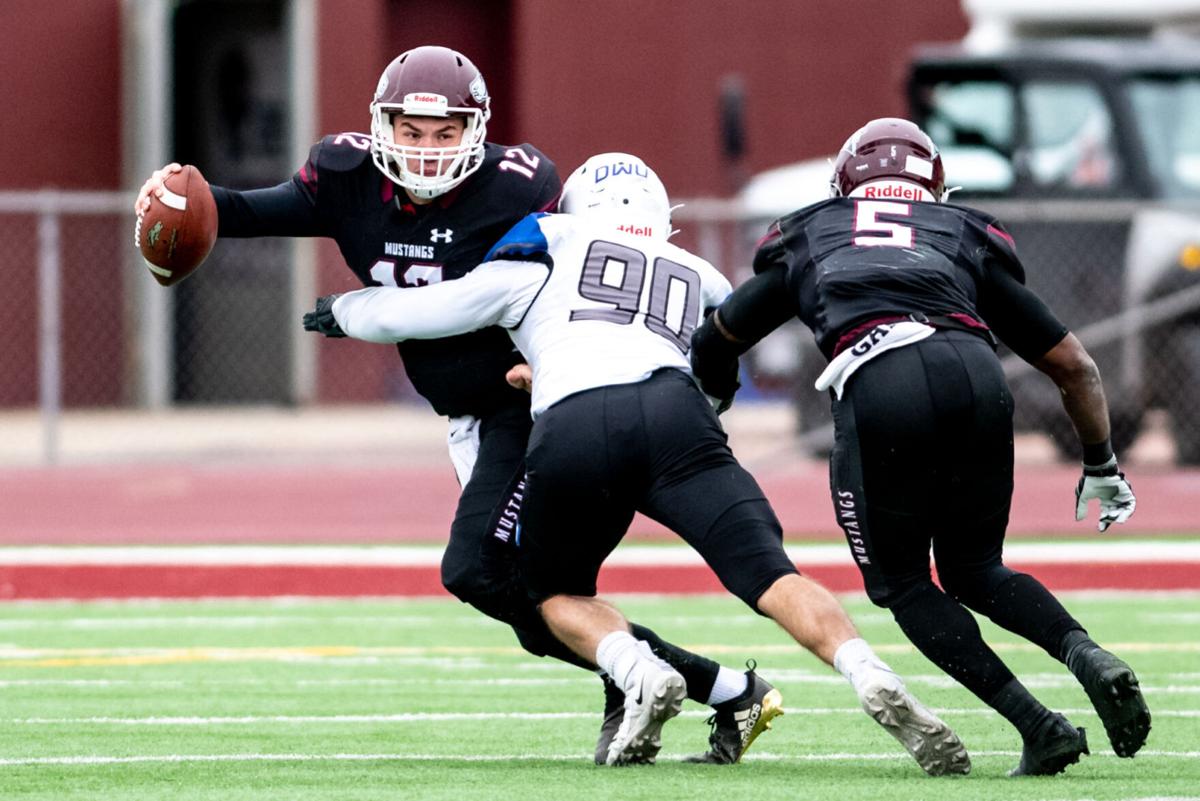 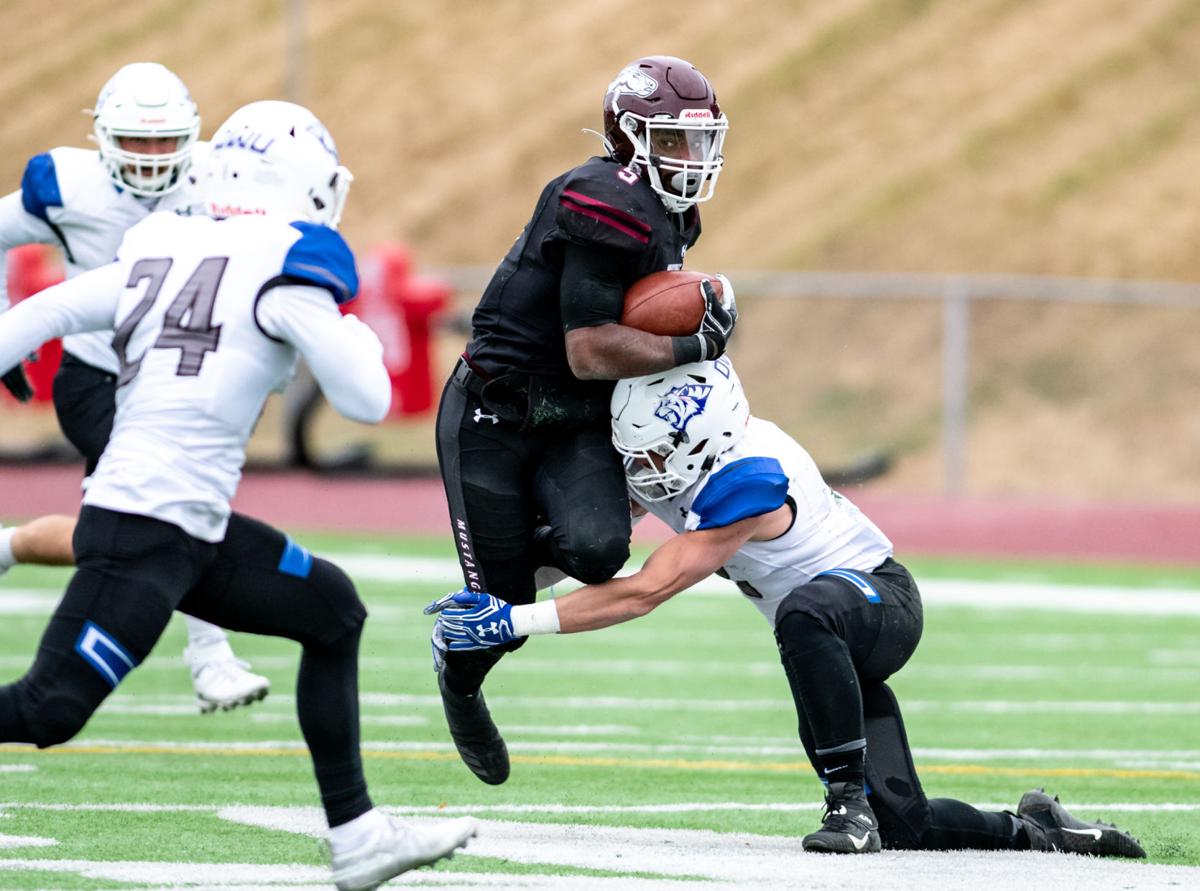 A bulk of Lester’s 29 completions (in 50 attempts) were of the short variety and Dakota Wesleyan’s running game was totally shut down to the tune of just four total yards.

The Tigers reached the red zone three times, but only scored once.

“Our defense has shown to do that all year, to really play well inside the red zone,” Morningside coach Steve Ryan said. “The field tightens up and we’re pretty good against the run, so all of those things were in effect.”

Morningside’s Joe Dolincheck had a typical day at the office, completing 18 of 23 passes for 343 yards and three touchdowns.

Both Reid Jurgensmeier (122) and Jamal Abousafi (105) went over the 100-yard mark in receiving yards. Each scored a touchdown, while Jake Knott hauled in a 38-yard scoring pass for his only catch and first career touchdown.

Still, the Mustangs clung to a perilous 21-7 lead at halftime before tallying 21 points in the third quarter.

“I thought we came out and played really well in the third quarter,” Ryan said. “I think their (DWU) kids played hard, that’s a credit to coach (Ross) Cimpl. In some ways this is a tough year and it’s got to be even tougher when you’re in that type of situation. But we helped them out by fumbling the ball.”

Morningside coughed it up three times and lost all three fumbles. DWU’s Nate Rupprecht also returned an interception 42 yards for a touchdown.

That set up a 6-yard touchdown run by Arnijae “AP” Ponder and after the Mustangs forced a punt, Schweigert brought it back 73 yards to paydirt.

Weston Schultz then intercepted a pass at the DWU 32-yard line, leading to Ponder’s third touchdown run of the game. Ponder finished with 159 yards on 20 carries, while Anthony Sims added 59 yards, including a 22-yard burst up the middle for the game’s final touchdown.

Ponder’s final TD -- a 5-yarder -- gave Morningside a 42-7 lead with seven minutes left in the third quarter. But the Tigers fought back to within three scores on a 10-yard TD pass by Lester and the pick-six.

Unfazed, Dolincheck found a wide-open Albousafi behind the defense for a 40-yard touchdown two plays after the interception return. Dolincheck, by the way, threw a touchdown pass for the 19th straight game.

Morningside, now 5-0, hits the road the next two weeks, beginning with a game at Dordt Saturday at 1 p.m.

For more photos from Saturday's Morningside's win over Dakota Wesleyan, go to siouxcityjournal.com.

Restrictions enacted mid-season limit Elwood Olsen Stadium to only about 20 percent of its capacity, or approximately 1,500 to 2,000 spectators at most; face masks are required. "Whatever it takes to get them to play," the father of one player said.

Sykes will replace Tim Jager on Dec. 15 and serve as both athletic director and men's basketball coach for one season before giving up his coaching responsibilities.