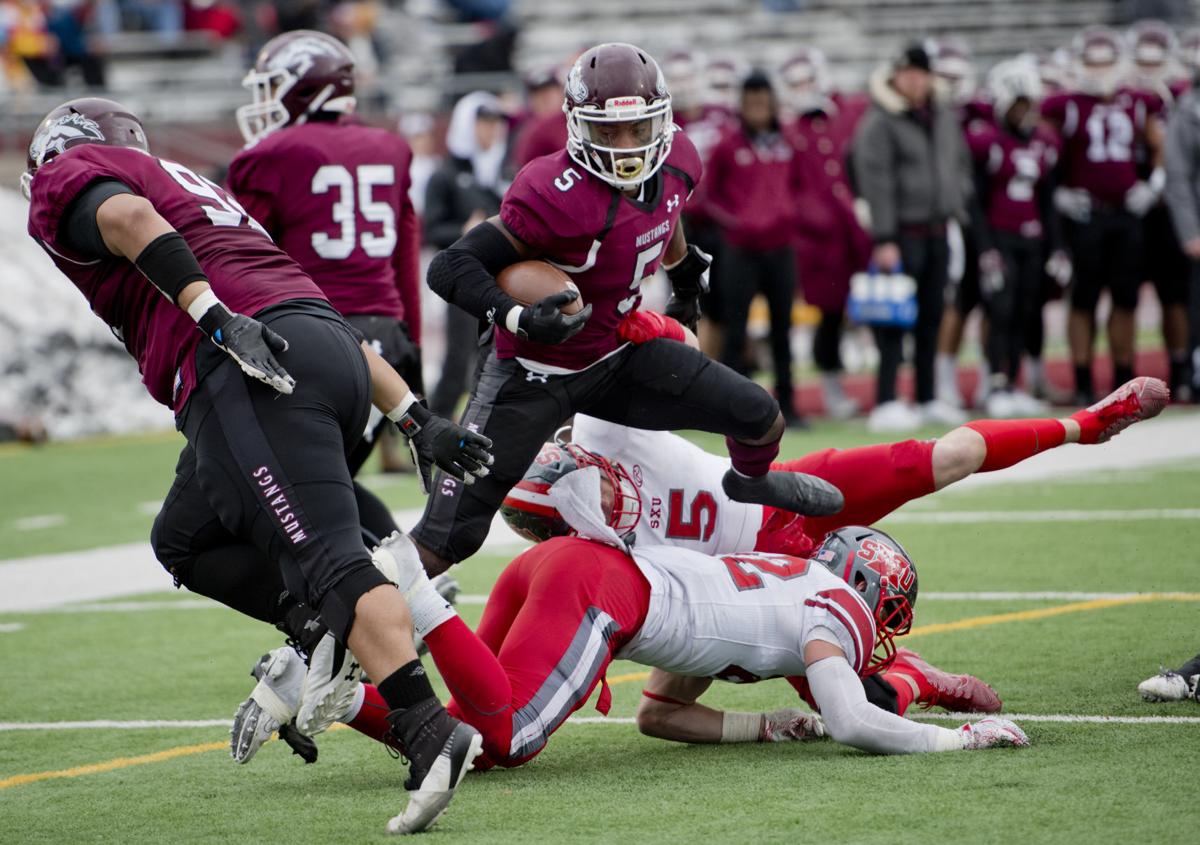 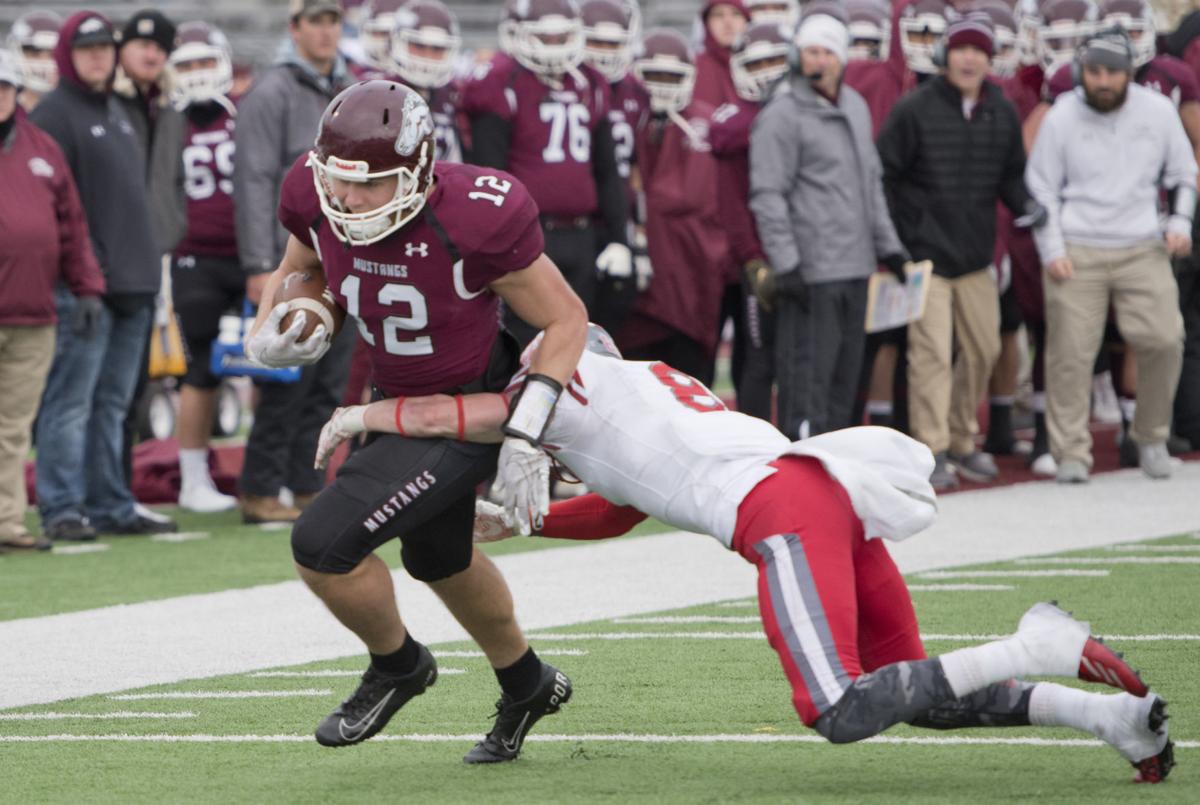 Morningside's Addison Ross runs after the catch as Saint Xavier's Steven Meyer tries to tackle him in the second quarter. 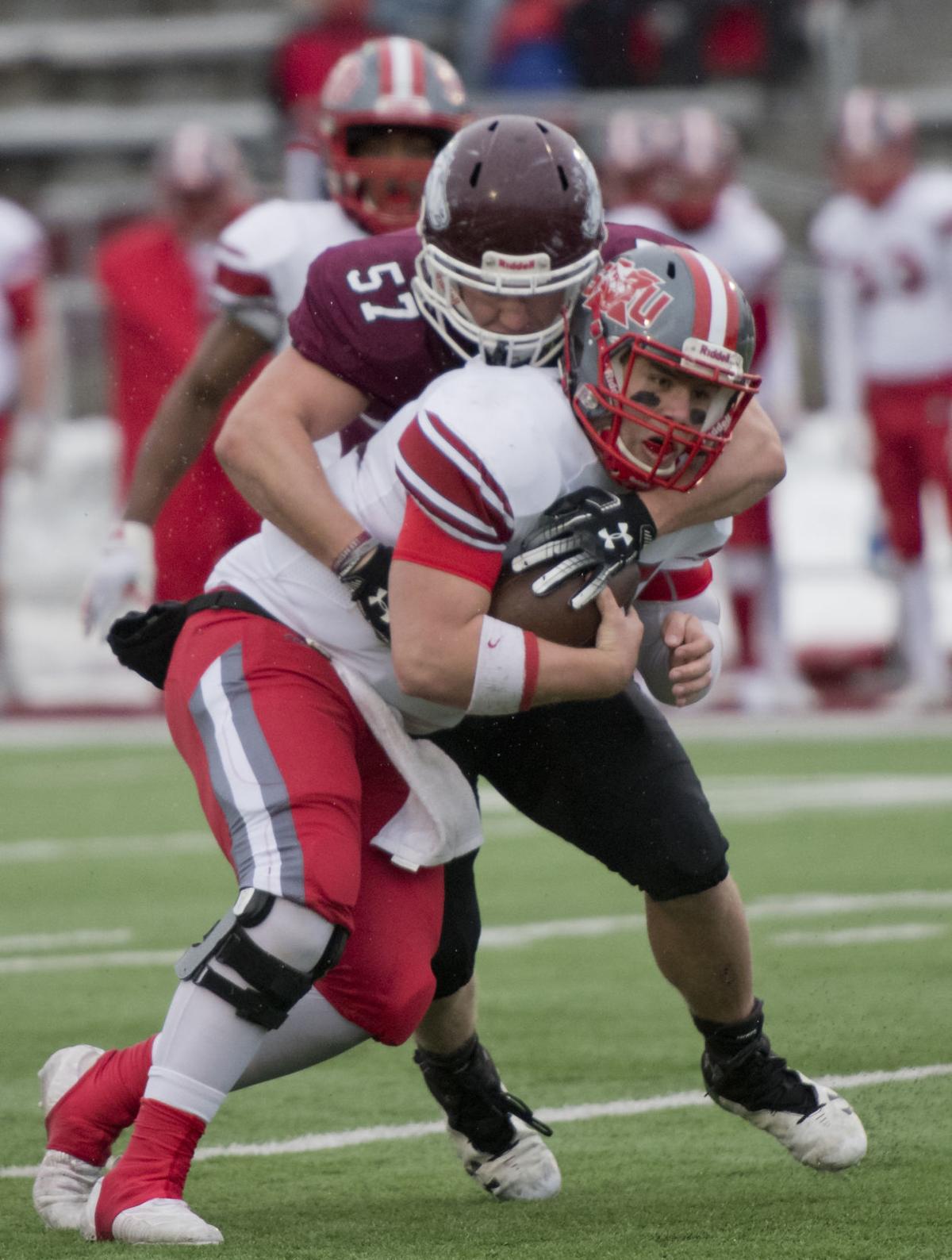 Morningside continued its mastery of Saint Xavier (Ill.) in the NAIA football playoff quarterfinals, rolling to a 51-0 victory at Olsen Stadium Saturday.

The Mustangs belted Saint Xavier for the third time in as many seasons in quarterfinal play, doing so in dominating fashion. The top-ranked defending national champions, now 12-0, earned another home game next week for a semifinal with their 27th straight win. Morningside hosts Grand View this upcoming Saturday at noon in the semifinals.

“I thought the offensive line played really well,” Morningside Coach Steve Ryan said. “That was our concern, I thought they had a really good pass rush and their ability to get to Joey and they weren’t able to do that.

“The other guys played well, too. I thought Reid (Jurgensmeier) made some good catches to keep things going and of course Bo (Els) and A.J. (Austin Johnson) made plays on the outside and AP played well. But a lot of it just came back to the O-line.”

Dolincheck had a highly efficient outing, completing 25 of 38 passes for 303 yards. The sophomore had two scoring tosses to Els, who finished with 11 catches for 138 yards, while Arnijae “A.P.” Ponder went over 100 yards on the ground for the 10th time this season.

Saint Xavier (9-3) had some gaudy passing statistics coming into the game and Alex Martinez did throw for 240 yards. The Cougars, though, were limited to 36 rushing yards on 20 attempts.

The relentless Mustangs sacked Martinez nine times, including 4.5 by David Rios, which was a new postseason single-game record.

“I was just ready for the game, we had a player injured so I had to step in,” said Rios, a junior from Sioux Falls Lincoln. “I was mentally seeing myself making plays and it actually happening.

“We have a great defense, I think it is the best in the country and we played like it today. We were just going out there and getting after the ball.”

To go along with all of the sacks, the Mustangs also intercepted two passes and recovered two fumbles. Klayton Nordeen picked one off in the end zone and former North High standout Deion Clayborne also had an interception.

Rios started in place of injured Niklas Gustav and came through with a career game.

“I think a lot of it had to do with our coverage that allowed us to get some pressure on them and do some things,” Ryan said. “David is an outstanding player. We’ve been rotating those guys all year. He just got a chance and showed what he’s capable of. That’s what you talk about with your guys, it’s next man up and when it’s your time to step up you have to do it.”

Morningside added to its nation-leading points production and heads into the semifinal with 676 points. The Mustangs racked up 515 total yards, just below their season average of 585 per game.

The Mustangs set the tone early, marching 76 yards in 10 plays on their first possession. Ponder, who rushed for 115 yards, took a screen pass from Dolincheck eight yards to the end zone.

Dolincheck threw an 18-yard scoring strike to Austin Johnson (his ninth touchdown of the season) before the first quarter ended. Chase Carter’s 28-yard field goal at the 8:59 mark of the second quarter made it 17-0 and the Mustangs turned a Gage Grinnell fumble recovery into a 5-yard Ponder TD run just before halftime.

Morningside turned it into a runaway with 20 third-quarter points, including a pair of touchdown passes from Dolincheck to Els. Ethan Stratman scored the final touchdown on a 1-yard run late in the contest.

The offense operated in a workmanlike fashion, but it was the defense that stood out in this contest.

“The guys really played well on defense and that’s why the score ended up the way it was,” Ryan said. “We got short fields many times. We didn’t finish drives necessarily in the first half, but kind of wore them out.”

The Mustangs have outscored Saint Xavier in the quarterfinals the last three seasons to the tune of 104-21. It was the fifth time the two have hooked up in this round since 2012, including an epic four-overtime contest in 2015, won by Morningside 75-69.

Now, it’s off to the semifinals, Morningside’s seventh trip there in the last eight seasons.

Grand View, Marian (Ind.) and Lindsey Wilson (Ky.) were the other three quarterfinal winners on Saturday. Morningside hosts Grand View in the semifinals.

Look back: Relive every Morningside win en route to another NAIA title game

Enjoy some of the best moments from the Mustangs' undefeated run to the NAIA football championship game. Which win most impressed you?

Morningside's Addison Ross runs after the catch as Saint Xavier's Steven Meyer tries to tackle him in the second quarter.