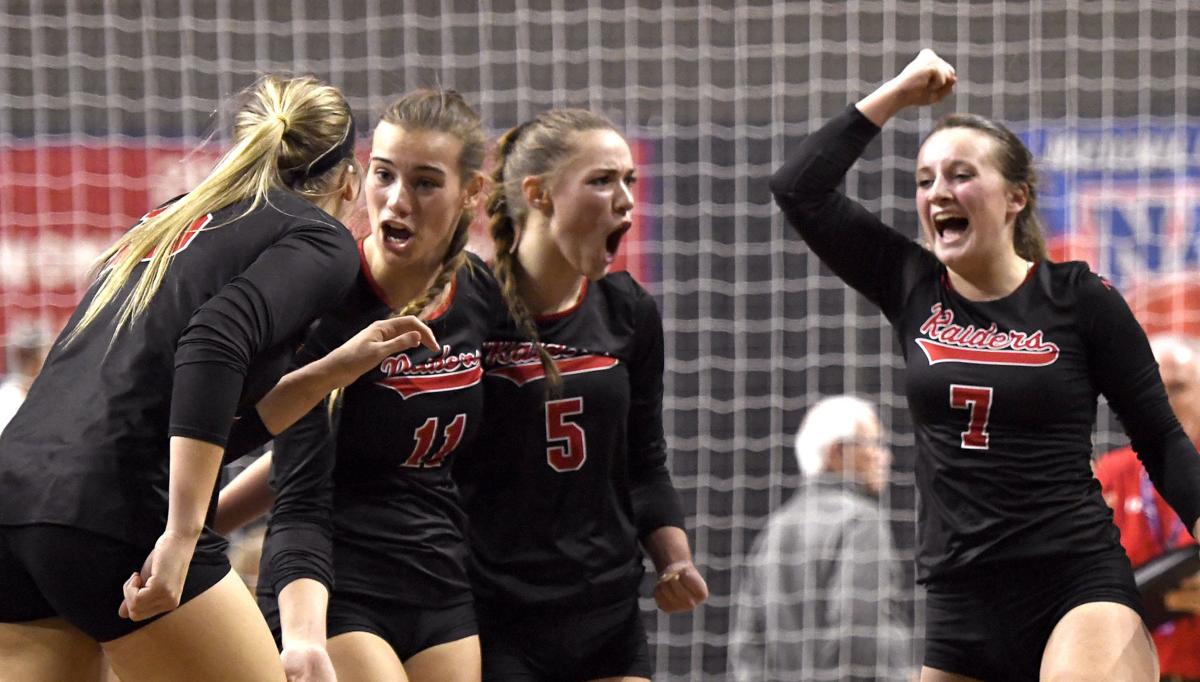 Northwestern players celebrate a point against Oklahoma City in the second set of the Round of 16 at the 2019 NAIA Women's Volleyball Tournament at the Tyson Events Center in Sioux City. 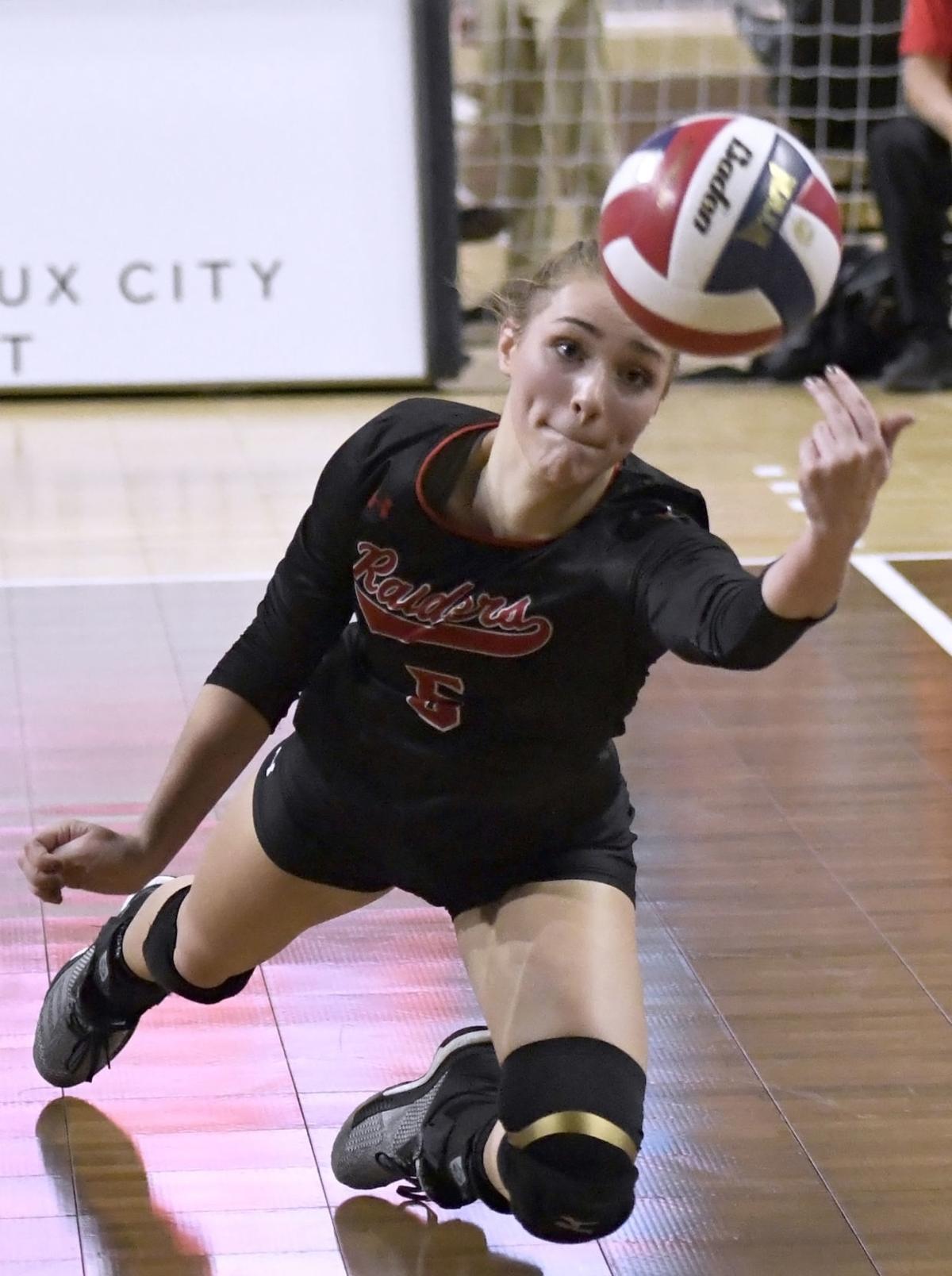 Northwestern's Lacey Wacker lunges for the ball Friday in the second set against Oklahoma City during the round of 16 in the 2019 NAIA Women's Volleyball tournament at the Tyson Events Center in Sioux City.

And each time, the Red Raiders keep finding a way to win.

First, the team lost second-leading hitter Makenzie Fink to an ankle injury during the second pool play match against Lawrence Tech on Wednesday.

Then, during Thursday’s final pool play match against Corban, Anna Wedel, one of the top all-around players in the nation, aggravated her foot injury that she suffered a month ago.

So in the Round of 16 match against Oklahoma City on Friday at the Tyson Events Center, Wedel was forced to only play three rotations instead of her normal six.

Oh, and Northwestern’s Lacey Wacker, who leads the nation in assists per set, is dealing with a stomach bug.

The No. 2 Red Raiders, the top attacking team in the nation, got off to a slow start in its Round of 16 match and No. 16 Oklahoma City took advantage. Northwestern hit .000 as the Stars easily won the first set 25-16.

Northwestern bounced back, found its footing and claimed a close second set and then handled the next two sets to advance to the quarterfinals with a 16-25, 26-24, 25-21, 25-19 victory.

“This group competes super hard,” Northwestern coach Kyle Van Den Bosch said. “We said it wasn’t going to be easy and you have to give every ounce, every time. Oklahoma City is a good team so I was proud of how our girls played.”

Despite dealing with her foot injury, Wedel finished with a match-high 19 kills and she hit .237. Wacker overcame the stomach bug and finished with 40 assists, 14 digs, one solo block and three block assists.

“I thought Lacey was pretty gritty and found a way,” Van Den Bosch said. “Anna is gutting it out. She’s hurting but she is finding ways to score.”

After hitting .000 in the first set, Northwestern hit above .200 in the second and third sets and finished with a .141 hitting percentage. A.J. Kacmarynski had 10 kills, Emily Van Ginkel had six and Bekah Horstman and Jessica Harald had five kills each.

Strasser finished with a team-high 25 digs. Bri Kleinwolterink and Ann Pater each had 11 digs.

“I thought we were really playing defensive volleyball,” Van Den Bosch said. “Emily was really good. She was really elite.”

With Wedel unable to play in the back row, Strasser felt she needed to step up.

“It was a little different without her in the back row but we managed well. We had girls step in and they did an amazing job,” Strasser said. “I love digging. I like when people hit at me and I felt like it was a fun game for everyone.”

The first set went south right away from the beginning. Oklahoma City won the first three points and while the Red Raiders were able to cut the Stars lead to 12-10, Northwestern never got any closer as Oklahoma City pulled away for a 25-16 victory.

“It felt like we couldn’t find a rhythm,” Strasser said. “It was crazy coming back from (Thursday) night and then coming here again. We knew we just had to settle in, find our groove and once we did, once we got that in the second set then we got our win. It was good.”

Oklahoma City came all the way back to tie the set at 16 and then tied it at 20, 23 and 24. But the Stars never took the lead in the second and Van Ginkel finished the set with a kill and a block for a 26-24 Red Raiders’ victory to even the match up at 1-1.

“I thought the key is that we won the second set,” Van Den Bosch said. “It gave us confidence. I thought we settled in a little more and if (Oklahoma City) wins that second one, it’s a long battle back. I thought that was key for the whole match.”

Oklahoma City jumped out to a 7-3 lead in the fourth set when Wedel put down a kill and the Stars followed with three straight attack errors. That led to a 17-4 run to put the Red Raiders up 20-11.

The Stars tried to come back but just like the third, Northwestern finished off the set to 25-19 to win the match in four.

“It was an intense game,” Strasser said. “Very fun, though.”

Due to deadline, Northwestern's quarterfinal against Jamestown didn't finish by deadline. Northwestern trailed X-X in the match. See siouxcityjournal.com for more info and read Sunday's Journal for more.

Saturday's semifinals begin at 11 a.m. and the championship is at 7 p.m.

Kingsley's Phelps to walk-on at Iowa

Wingett scored more than 2,200 points in his career at Winnebago, the second-most points in Nebraska history, and led the team to a 2015 state championship. But he's not asked to be a prolific scorer right now.

The 35-point victory for USD stands out even more considering in the previous 16 contests since the Coyotes joined the Summit League, the average margin of victory between the two schools was eight points.

LINCOLN, Neb. -- Nebraska will have a revamped coaching staff in 2020.

PEORIA, Ill. -- Protect a road lead with first place on the line.

IOWA CITY, Iowa – Tuesday is more than the start of spring semester classes at Iowa.

AMES, Iowa — The Iowa State men’s basketball team is generating the shots it wants to on offense, and the shots that have made the Cyclones su…

No. 1 Morningside men pull away late against Dordt

There was a glimmer of hope for the Briar Cliff women’s basketball team on Saturday against Concordia, but the third-ranked Concordia Bulldogs put any hope to rest in the second quarter.

Northwestern players celebrate a point against Oklahoma City in the second set of the Round of 16 at the 2019 NAIA Women's Volleyball Tournament at the Tyson Events Center in Sioux City.

Northwestern's Lacey Wacker lunges for the ball Friday in the second set against Oklahoma City during the round of 16 in the 2019 NAIA Women's Volleyball tournament at the Tyson Events Center in Sioux City.