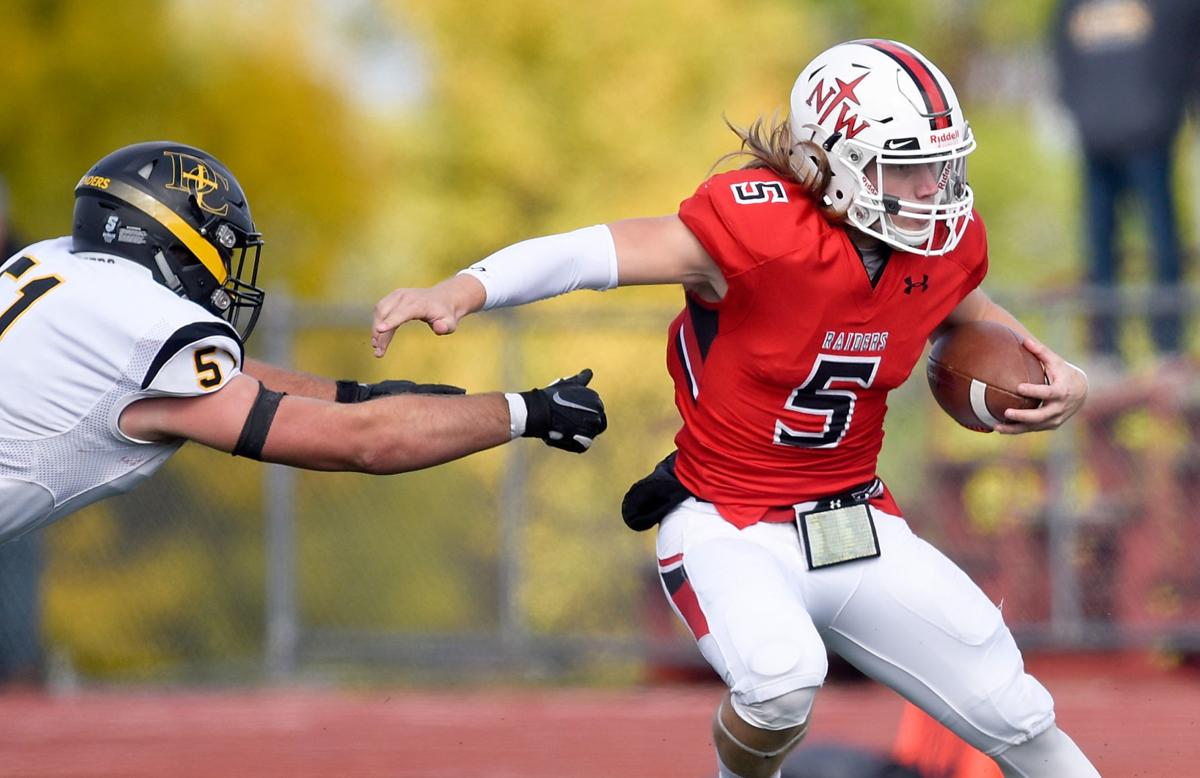 Northwestern's Tyson Kooima, right, looks for room to run as he escapes a tackle from Dordt's David Kacmarynski during a college football game in Orange City on Oct. 6, 2018. 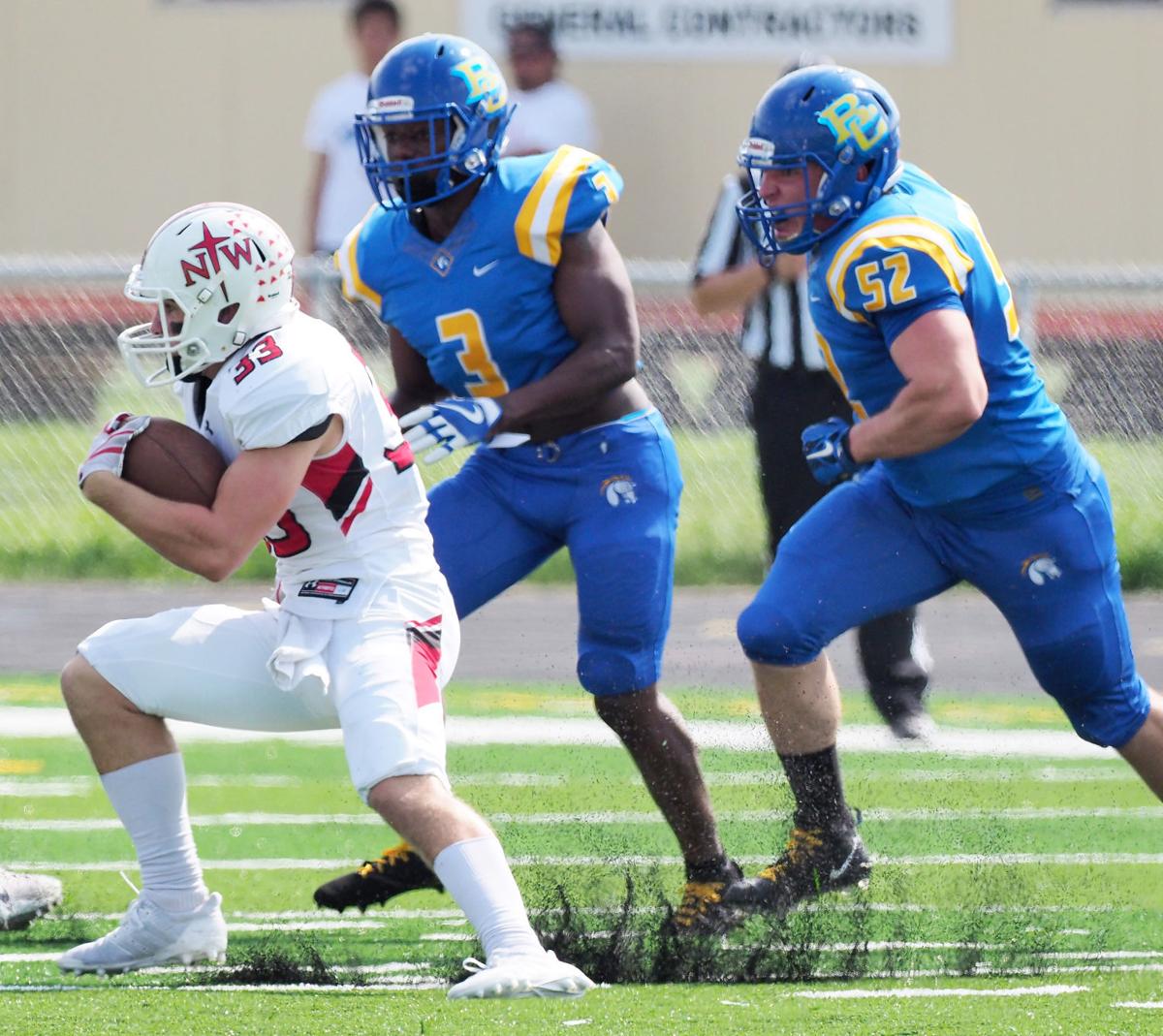 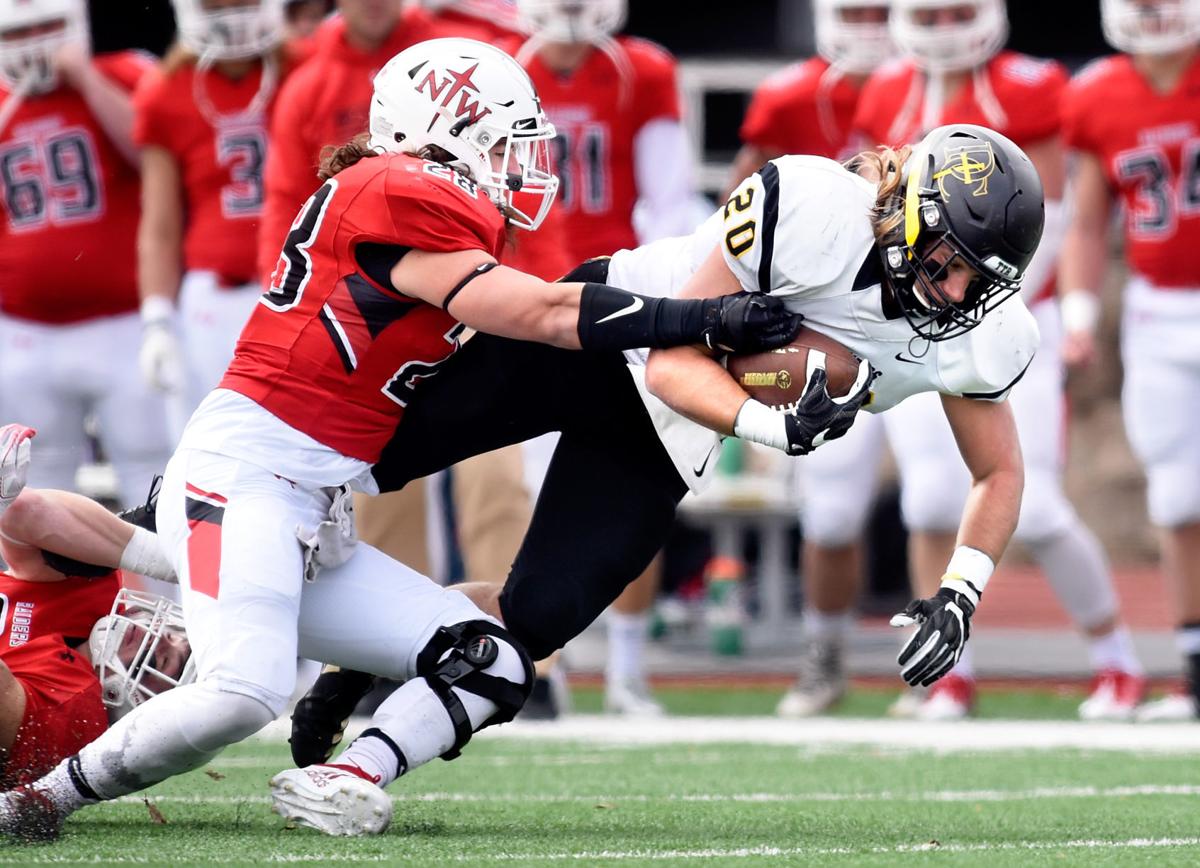 ORANGE CITY, Iowa — Northwestern coach Matt McCarty admits this season’s team is playing with a bit of a chip on its shoulder.

Usually, a team does that because it thought it wasn't ranked as high as expected, whether it was nationally or in the preseason poll.

That’s not the case for Northwestern. The Red Raiders have a chip on their shoulder because of how last season ended — a 14-6 loss to Dickinson State in the first round of the NAIA playoffs.

At the time, the Red Raiders were a top-10 team, so the loss came as a surprise.

The Red Raiders are ranked No. 11 coming into the season and with a good chunk of its starters back, they are ready to prove the end of last season was a fluke.

“Our guys are really hungry and really focused. The key is continuing to have that chip on our shoulder as we prepare and as we go through the season,” Northwestern coach Matt McCarty said. “Last season didn’t end the way we wanted it to and that really drives our guys throughout this offseason and fall camp. I think they are hungry to get back on the field and start the season and compete.

“Through two weeks, I haven’t seen them have a bad practice. They are hungry every day they are on the field. It’s fun to see an experienced group hungry to get better every day and that’s the key.”

The loss to Dickinson State still stings because it was an entirely different team that took the field that day. Northwestern only scored six points after scoring at least 28 points in every regular-season contest.

The 286 total yards were well below the 447.2 the Red Raiders averaged during the season.

McCarty wants that loss to Dickinson State to be a reminder to take care of business every day.

“We can’t change that but we can use that to change how we do things moving forward,” McCarty said. “Our guys have really embraced that and we’ve used that as a focus for us as a reminder of what we need to do.”

It isn’t just coach speak from McCarty, either. The team realizes it fell short of its potential last season.

“I think it’s in the back of everybody’s minds,” Northwestern junior wide receiver Shane Solberg said. “We thought we could’ve done a little more with last year but obviously, expectations never change.

“New year, new season, new jerseys even. We are going to go out there and see what happens.”

Solberg was a bit part of Northwestern’s high-powered offense that returns its three key cogs this season.

Junior quarterback Tyson Kooima passed for 2,896 yards (10th-most in the nation) and 23 touchdowns.

Senior running back Jacob Kalogonis rushed for 1,275 yards and 17 touchdowns.

“We do have playmakers, we have all of the puzzle pieces (offensively). Now we are just focusing on putting it all together,” Solberg said. “There’s been a lot of competition (offensively) this fall camp. Just go out there and have some fun.”

Kooima, Solberg and Kalogonis may get most of the attention this season but McCarty likes the depth on offense this season.

Sophomore Cade Moser, junior Canon Flores freshman Michael Storey are receivers McCarty has been impressed with along with junior tight end Josh Fakkema and redshirt freshman quarterback Blake Fryar, who will be Kooima’s backup this season.

“We have some good experience back with guys that have played in some big games the last two years. We’ve been able to build on that foundation,” McCarty said. “Where we are in camp two weeks into the season is much farther than the past two seasons. You see that growth.”

While the offense gets a good amount of the attention, the defense was solid for the Red Raiders last season. They were second in the Great Plains Athletic Conference, allowing only 20.9 points per game and 322.5 yards per game.

The Red Raiders will be led by their linebacking core with seniors Tanner Machacek and Sean Powell and sophomore Ben Ganstra.

“We are really excited about our linebackers and feel we have three great playmakers with those three,” McCarty said.

Junior Carter Van Gorp, senior Colin Snyder and sophomore T.J. Jones return on the defensive line. Freshmen Logan Hoyt and Jessen Reinking are both working themselves into the mix on the line.

“I feel like (defensive coordinator Billy) Kirch and the defense have done a great job throughout fall camp,” McCarty said. “We feel like we are doing a good job up-front right now and we are seeing a lot of growth there. Defensively, we like where we are at right now.”

With the mix of offensive firepower and play-makers in the front seven defensively, the expectations should be high for the 11th-ranked Red Raiders.

But McCarty is having his team take it day-by-day.

“That’s the biggest expectation that we have, can we get better every day.”

McCarty believes that process should turn the Red Raiders into a quality team and he believes in the guys he has on the roster currently.

“I think we have a really competitive and strong team right now. Our guys really care about each other. They work hard, they play hard together and for one another,” McCarty said. “If we play like we are capable of playing, we can play with anybody.”

WHO: Valley City State at Northwestern

Northwestern's Tyson Kooima, right, looks for room to run as he escapes a tackle from Dordt's David Kacmarynski during a college football game in Orange City on Oct. 6, 2018.