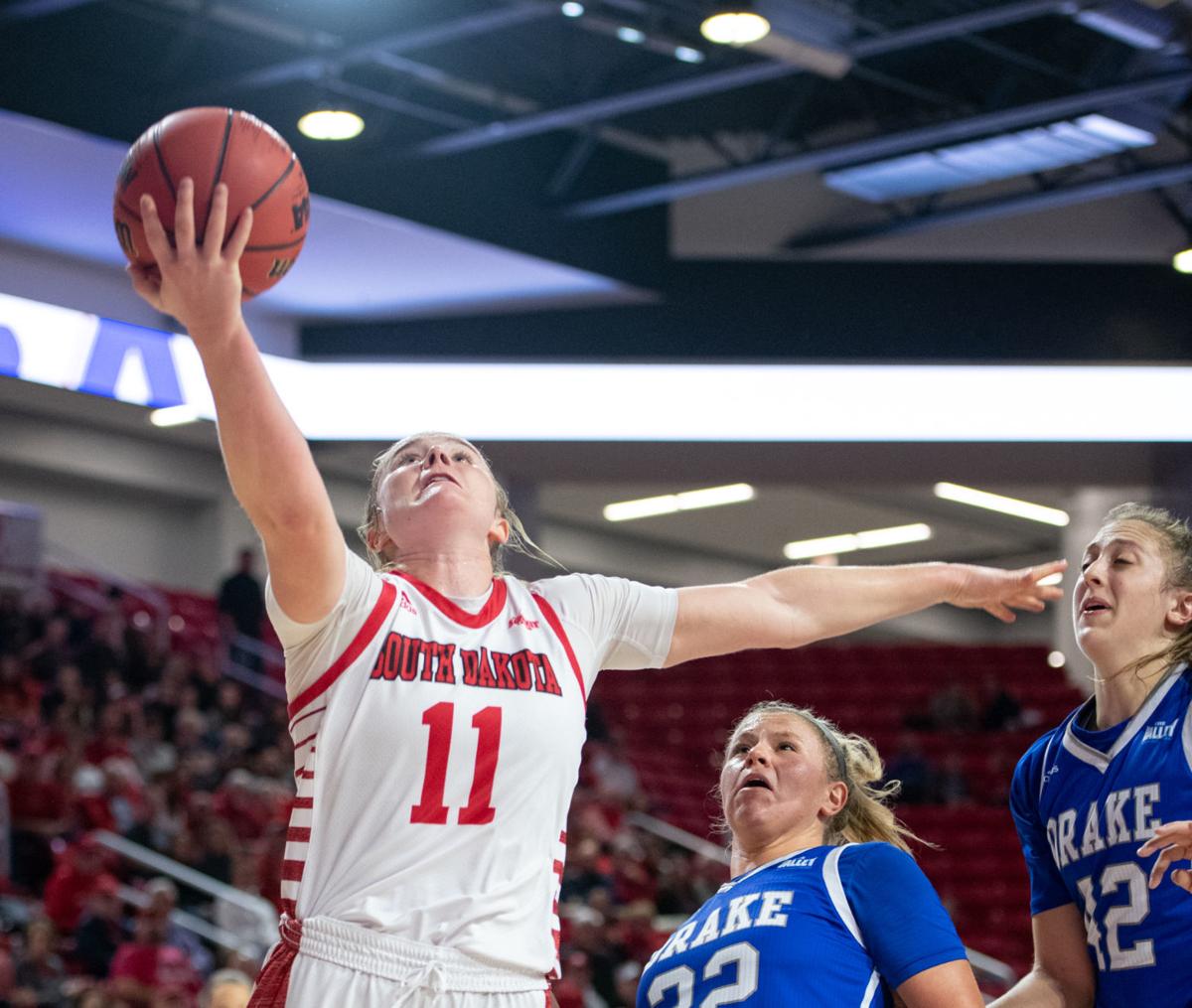 South Dakota's Monica Arens reaches for a shot before Drake's Hannah Fuller (22) and Maggie Bair (42) can block her in the second quarter Wednesday in Vermillion, S.D. South Dakota defeated Drake 102-94 in overtime. 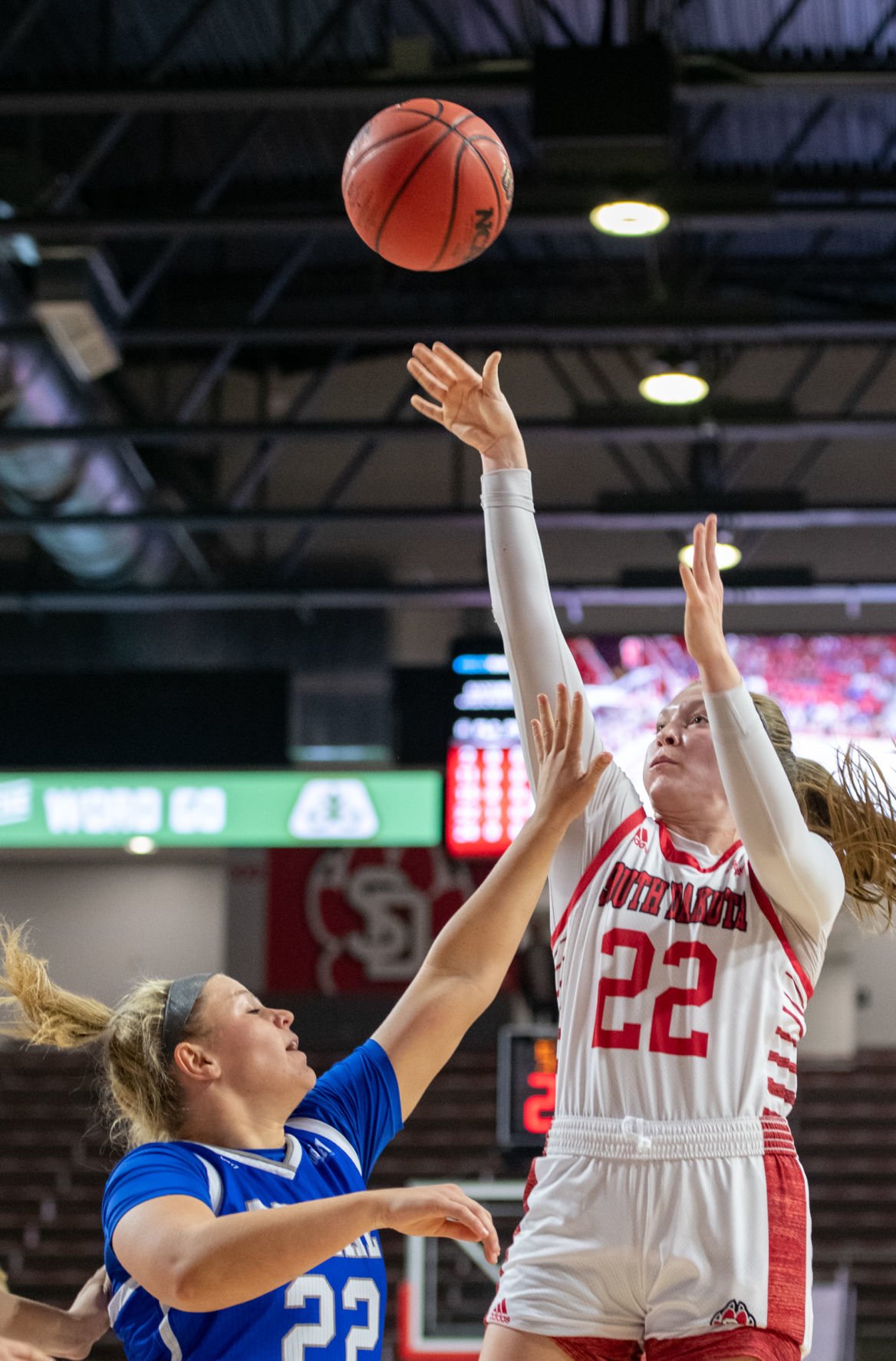 VERMILLION, S.D. -- Two of the best Mid-Major women’s basketball teams in the country squared off here Wednesday and didn’t disappoint.

South Dakota, ranked No. 1 in the latest Mid-Major poll, outscored No. 3 Drake 102-94 at the Sanford Coyote Sports Center.

It was an electrifying home opener for USD, picked to win the Summit League title. The Coyotes improved to 3-0 behind a second-half rally and dead-eye free throw accuracy in overtime.

“The pressure they simulated wasn’t what Drake showed us,” USD Coach Dawn Plitzuweit said. “We made adjustments in the second half but every one Drake had a counter for.”

Ciara Duffy added 20 points, Hannah Sjerven 16 and Madison McKeever 15. Taylor Frederick came off the bench to contribute 13 points and five rebounds, while Monica Arens sent the game to overtime with a buzzer-beater at the end of regulation.

The Coyotes got a break when Drake threw away an inbounds pass while leading 82-80 with 2.5 seconds left. The turnover resulted in a jump ball with possession awarded to South Dakota.

Arens, who finished with eight points, drove the lane for a layup as time expired, sending the crowd into a frenzy. The Coyotes took their first lead since 4-3 when Lamb made a 3-pointer to begin the extra session and they never trailed the rest of the way. USD converted 12 of 14 free throws in overtime.

“The play was drawn up to get it to anybody to make a play,” Arens said. “They doubled key and Chloe got the ball in to me. I guess we needed a shot so I just kind of drove and threw it up there, I guess.”

The Bulldogs (2-1) threatened to make it a runaway early, racing to a 22-8 lead in the first eight minutes. USD, though, scored the final nine points of the first quarter to pull within five.

Drake maintained a 47-37 halftime lead and mounted its biggest cushion, 59-42, at the 7:45 mark of the third quarter. Once again, however, South Dakota rallied, outscoring the Bulldogs 19-1 over the next six minutes. It took a rebound shot with .5 seconds remaining by Becca Hittner to give Drake a 65-62 lead after three quarters.

Drake seemingly had an answer for every Coyote push in the fourth and maintained an 81-77 lead with just 21.5 seconds remaining.

McKeever hit a 3-pointer from the top of the key to pull USD within a point before Hittner made the second of two free throws with 12 seconds left.

USD’s Duffy missed an open look underneath and on a scramble for the rebound the ball was awarded to the Bulldogs.

That’s when they committed the costly turnover on the inbounds pass.

IOWA CITY, Iowa -- Accusations of racial inequities within the football program he leads and candid conversations with former players have pro…

Luka Garza pretty much knew this was what he was going to do all along.

AMES, Iowa -- College football schedules have been in flux since the Big 10 was the first conference to announce a conference-only schedule am…

A revised Iowa football schedule comes with no guarantees but provides the Hawkeyes with a starting point and several unique twists.

Juco transfer DB Joseph is on campus, enrolled at UNL to become official member of team

Nebraska to start with Rutgers in conference-only slate

In a most unusual year, the Big Ten is aiming for an on-time start to its college football slate.

South Dakota's Monica Arens reaches for a shot before Drake's Hannah Fuller (22) and Maggie Bair (42) can block her in the second quarter Wednesday in Vermillion, S.D. South Dakota defeated Drake 102-94 in overtime.