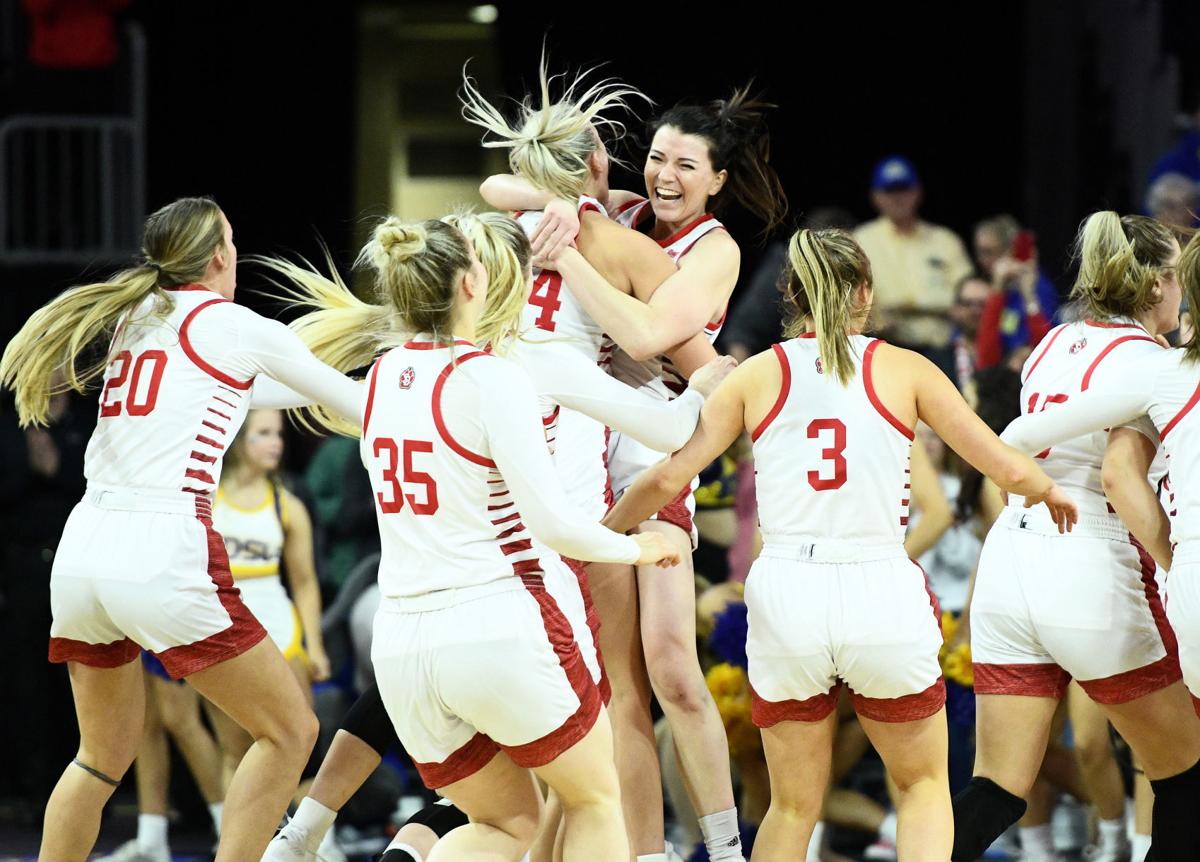 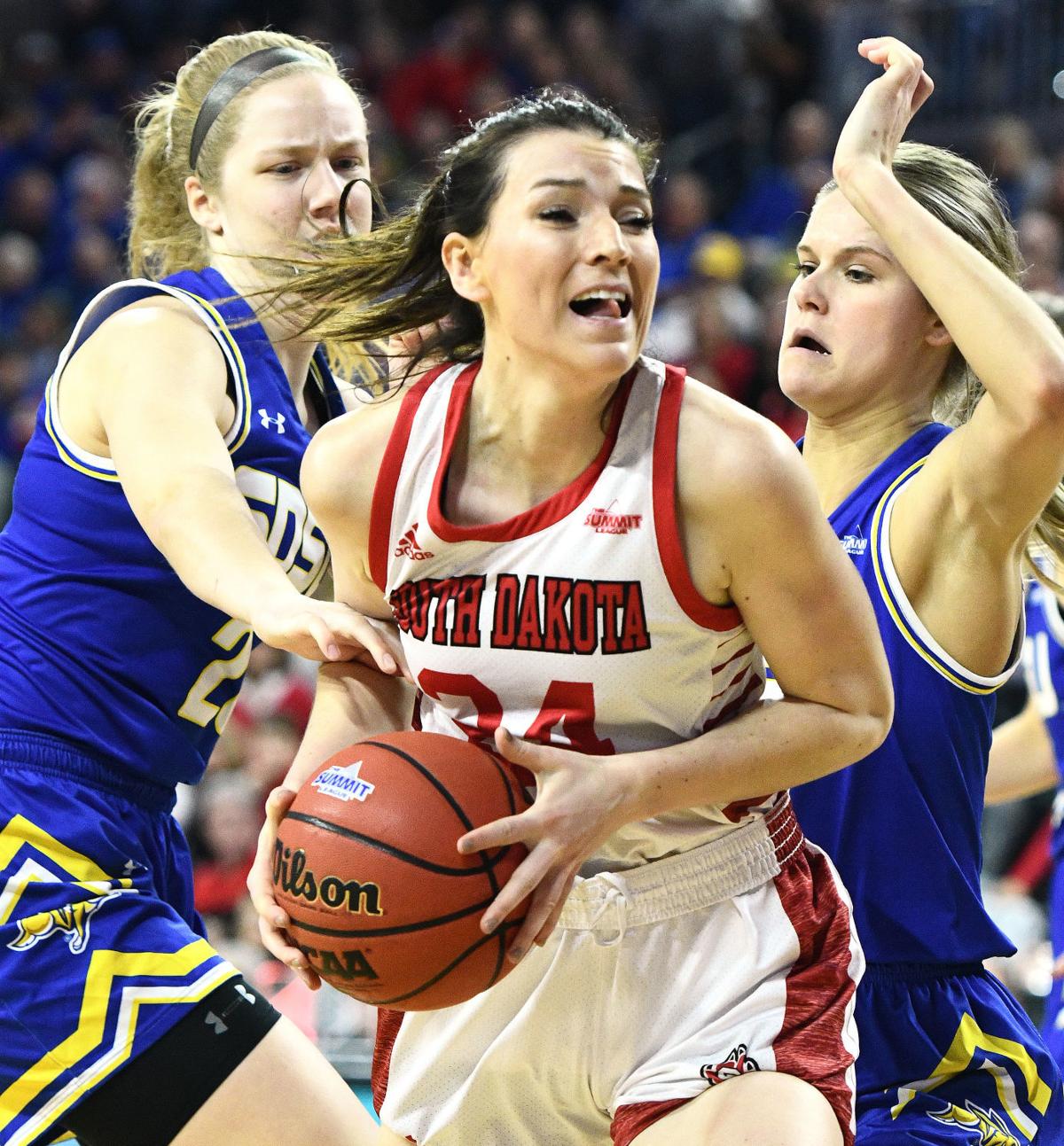 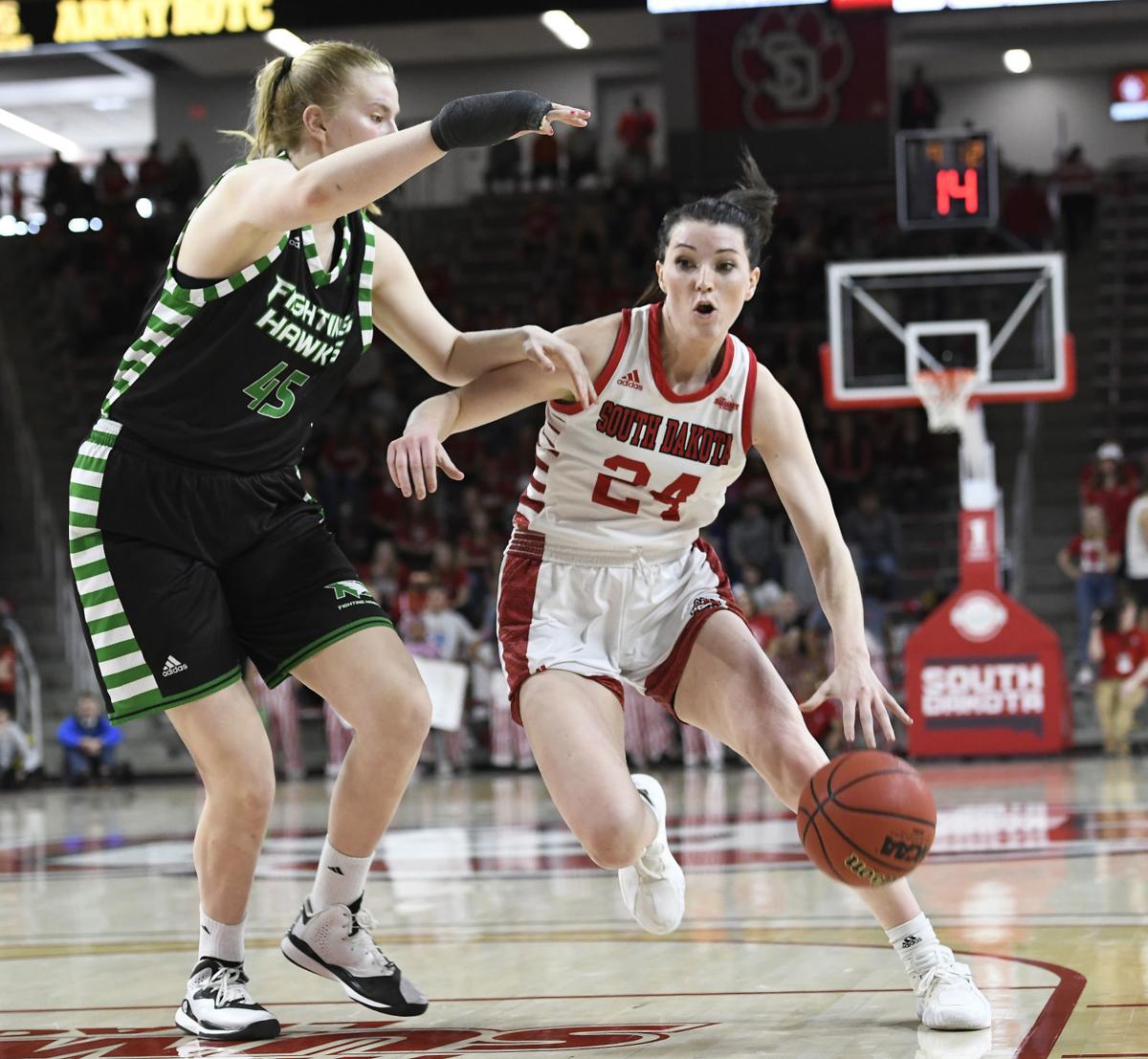 USD's Ciara Duffy drives towards the basket as UND's Melissa Leet guards her, during a 76-47 win on Feb. 29 over North Dakota.

Ciara Duffy has had plenty of national honors bestowed upon her over the past month. Now Duffy is likely ready to begin another chapter in her life.

Off the basketball court.

A few weeks ago, Duffy and her University of South Dakota teammates were on a basketball high like no other, beating South Dakota State University in the Summit League title game.

Then their season, like all others in college basketball, came to a disappointing end when the NCAA Tournament was canceled because of the coronavirus pandemic.

Suddenly, it was Duffy's final collegiate game, along with her senior teammates.

As it turns out, it's likely Duffy's final game not only on this level but on a professional level.

Duffy is getting married this summer to former St. Thomas More quarterback and basketball player Matthew Eastmo, who teaches at Creighton Prep High School in Omaha, Neb. They will be living in Omaha.

"I have started to look at jobs (in Omaha). I for sure don't know what I want to do, but there are a couple of areas I'm looking at. I'm really excited to start the next chapter," she said. "That's not to say that basketball in any form is out of the question because I'm sure you will find me in gyms in Omaha playing pickup games. Gosh, I still love this game."

Still, would Duffy turn down an offer to play somewhere professionally?

That answer is more than likely yes.

"I think I'm ready to let basketball maybe take a backseat to the rest of my life now," she said.

Duffy can now only look back at her career with the Coyotes.

And what a career it was.

"This is simply a remarkable honor for an incredibly special young lady," USD head coach Dawn Plitzuweit said. "We are all absolutely thrilled for Ciara, for her teammates, for our program, for the University of South Dakota and for the Summit League."

A 6-foot guard and St. Thomas More graduate, Duffy averaged 16.6 points, 5.5 rebounds and five assists in her senior season. She shot 50 percent from the field and 43 percent behind the arc. Duffy is the only player in USD history with more than 1,700 points, 600 rebounds and 400 assists in her career. She finished third on USD's all-time scoring charts. Duffy is a three-time all-Summit League first-team pick and twice named to the Summit's all-tournament team.

From STM to USD

"All the glory to God in the way this whole career worked out for me," she said. "I got to play the game that I love with these people, who are truly some of the most incredible people I have ever been around."

Everything, she adds, took care of itself in terms of winning or losing games. That actually became secondary to enjoying the journey with her teammates. Now that her career is over and as she looks back on it, it makes her cherish her teammates and everyone involved in the program that much more.

Duffy doesn't look back at all of the honors that she achieved as to why she played the game of basketball.

All of her honors — and she has said this on more than one occasion — are a tribute to the team. As a mid-major program, and the Coyotes did something special this year, climbing to as high as 17th in the nation in the Associated Press poll and 11th in the USA Today Coaches poll.

It was because of the work on the entire program, she said.

"My name happens to be the one that gets recognized, but it is truly a tribute to the USD women's basketball program," she said. "All of these things (honor) are the result of all of these people."

Duffy said that one of the saddest parts of having the season end is not getting to be around her teammates anymore, with what this group has been through together.

"I feel lucky that I got to be a part of it the last four years," she added. "Honestly, this was one of the hardest working groups that I have ever been around. It's one of the strongest teams, chemistry-wise, that I have ever been around. We were truly really close on and off the court. People could see that when they watched us play. It looked like we were having a blast because honestly, we were."

The Coyotes, 30-2, became the first team in Summit League history to run the table in the regular season and win the Summit League Tournament. South Dakota ended the year on a 19-game winning streak with an average victory margin of 31 points in the stretch.

The Coyotes' nonconference included Power Five wins over Ohio State, Utah and Missouri, with mid-major victories over Drake and Green Bay. USD also played No. 1 South Carolina to a 13-point game in December.

Duffy said this isn't how they would have written the end of their season, but now that they are a week out, it is starting to get a little bit of closure as they reflect back.

What made it easier to see a silver lining was this group truly enjoyed the journey and lived through each moment of the season, whether it was practices, workouts and traveling, she said.

"We were taking in each moment, enjoying each moment," she said. "The beauty was the journey. Even though it didn't end the way we wanted, I think we all can have a little peace as we look back and know that we don't have any regrets."

The Coyotes, although they were not able to see how far they could get in the NCAA Tournament, ended the season on a high on the court, defeating rival and Summit League Tournament nemesis South Dakota State 63-58 in the title game.

"It was cool to get to win that and have all of our family and friends, and all of our fans there. It was just really a cool environment to get to play in," she said. "To have it a rivalry game on top of it was truly something special. Now, looking back on it, it makes it even more special because we know it was our last game together. Everything takes on a little more weight, in each moment. It's a little more of a place in our hearts."

They didn't have any control over COVID-19 and the cancellation of the NCAA Tournament, but yes, Duffy thinks about what the Coyotes still had a chance to accomplish.

"I think I would been lying if I haven't thought about what could have been," she said. "But when a situation like this arises, and it is unprecedented, it makes it a little easier because it is out of your control. We don't have to look back and regret anything; regret how we could have won our last game, the things that could have been."

From her all-state high school days at St. Thomas More to her final game at USD, to now her likely future away from basketball, Duffy will likely attack life like she did on the court.

31: Games this season where Duffy scored in double figures

espnW Mid-Major Player of the Year

VERMILLION, S.D. -- The University of South Dakota will continue remote delivery through the summer academic term, as announced by the South D…

USD's Ciara Duffy drives towards the basket as UND's Melissa Leet guards her, during a 76-47 win on Feb. 29 over North Dakota.