Sure, like all players, Pottebaum wanted that opportunity. That chance came for Pottebaum on Tuesday night against the Northwestern Red Raiders.

Northwestern’s Craig Sterk hit a layup with 7 seconds left, and even though Morningside had some timeouts left to use, the Mustangs decided to play on. 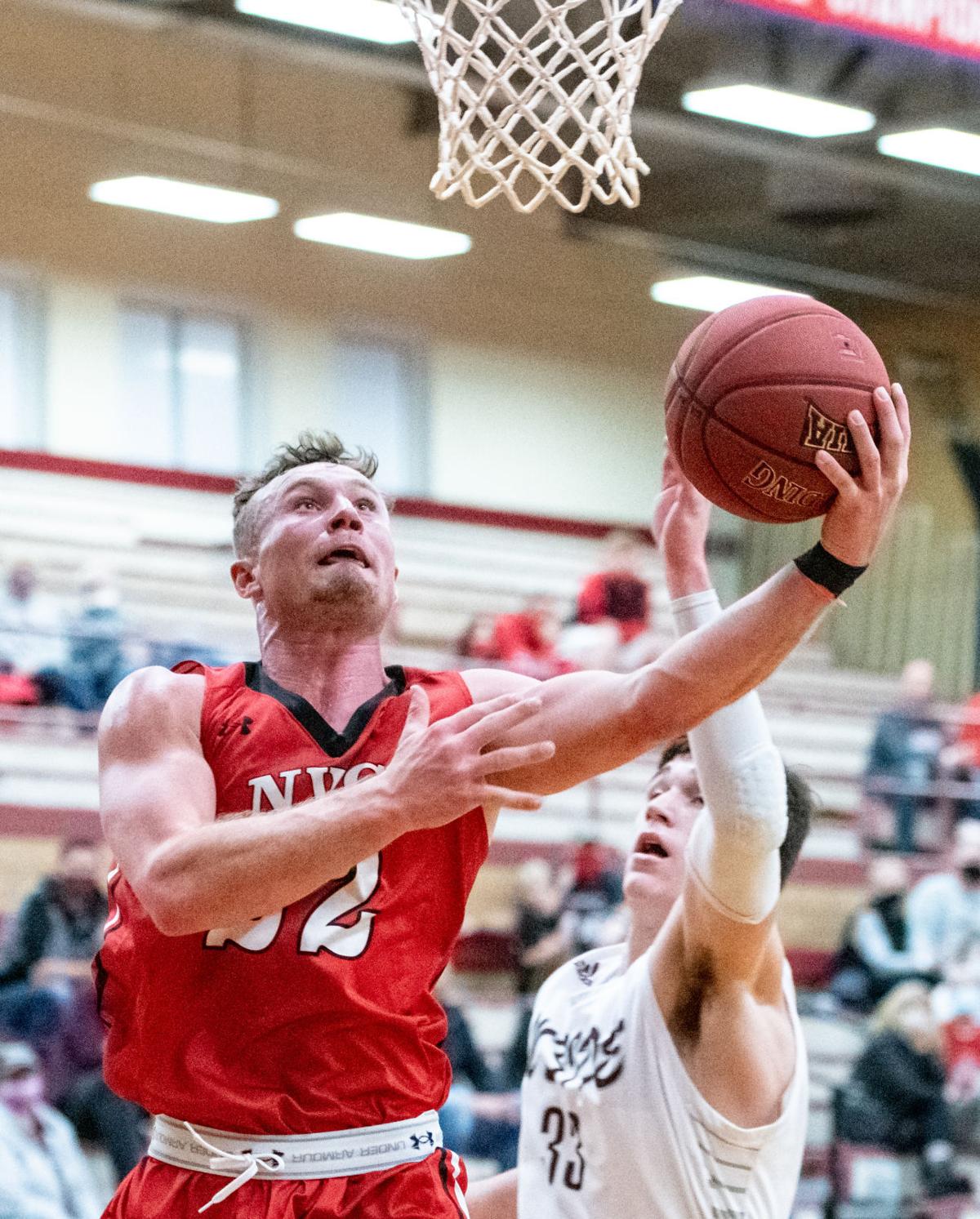 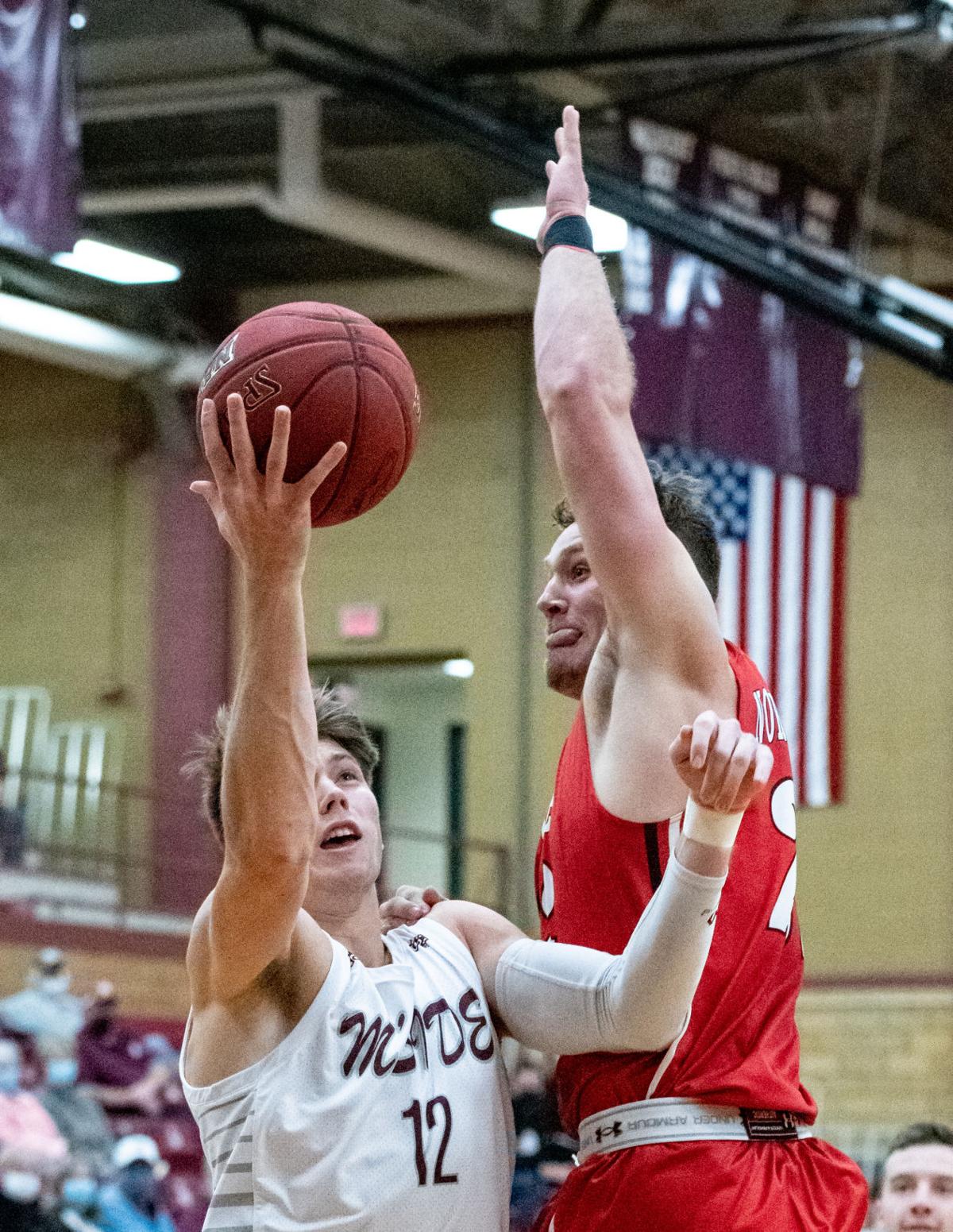 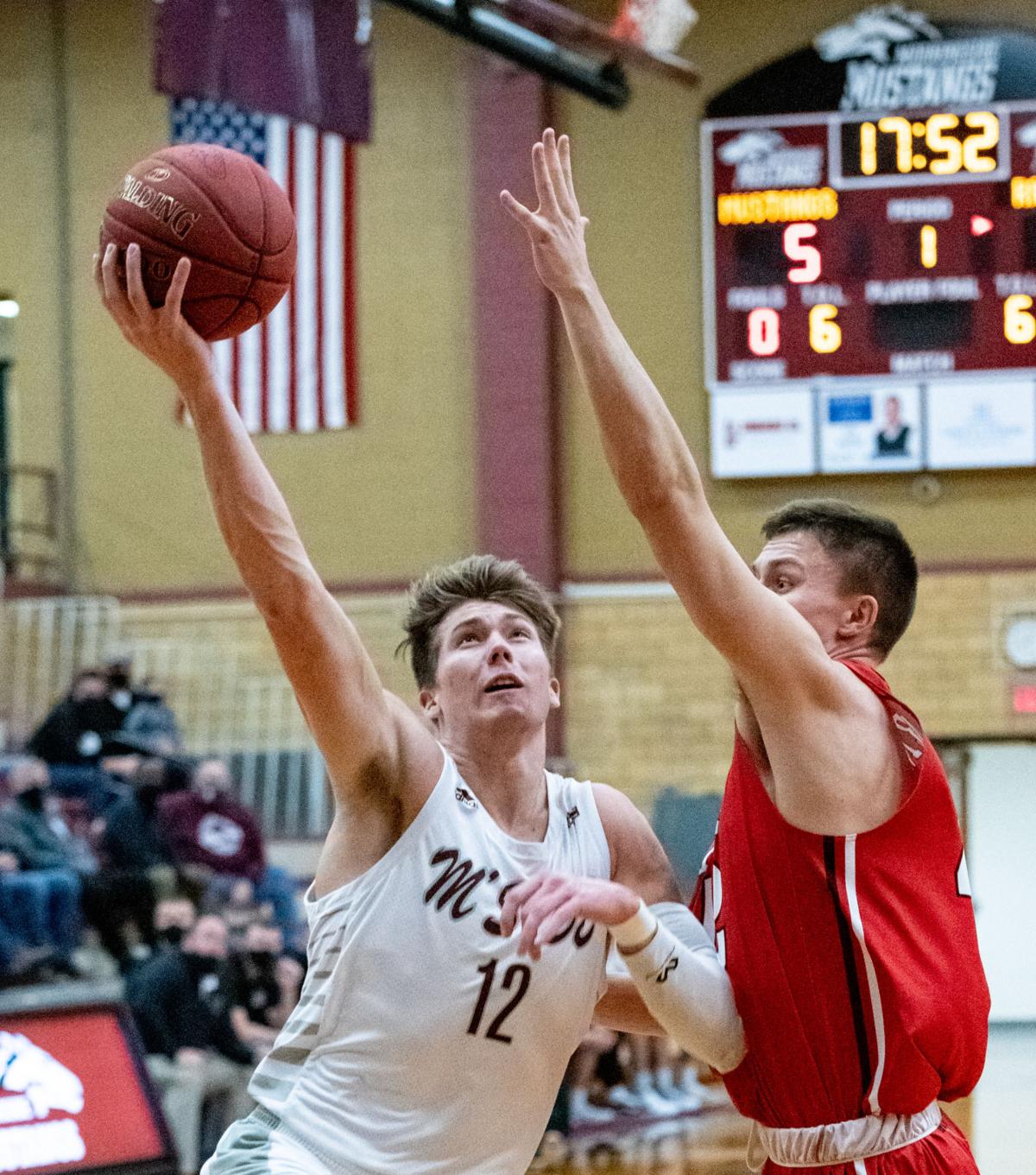 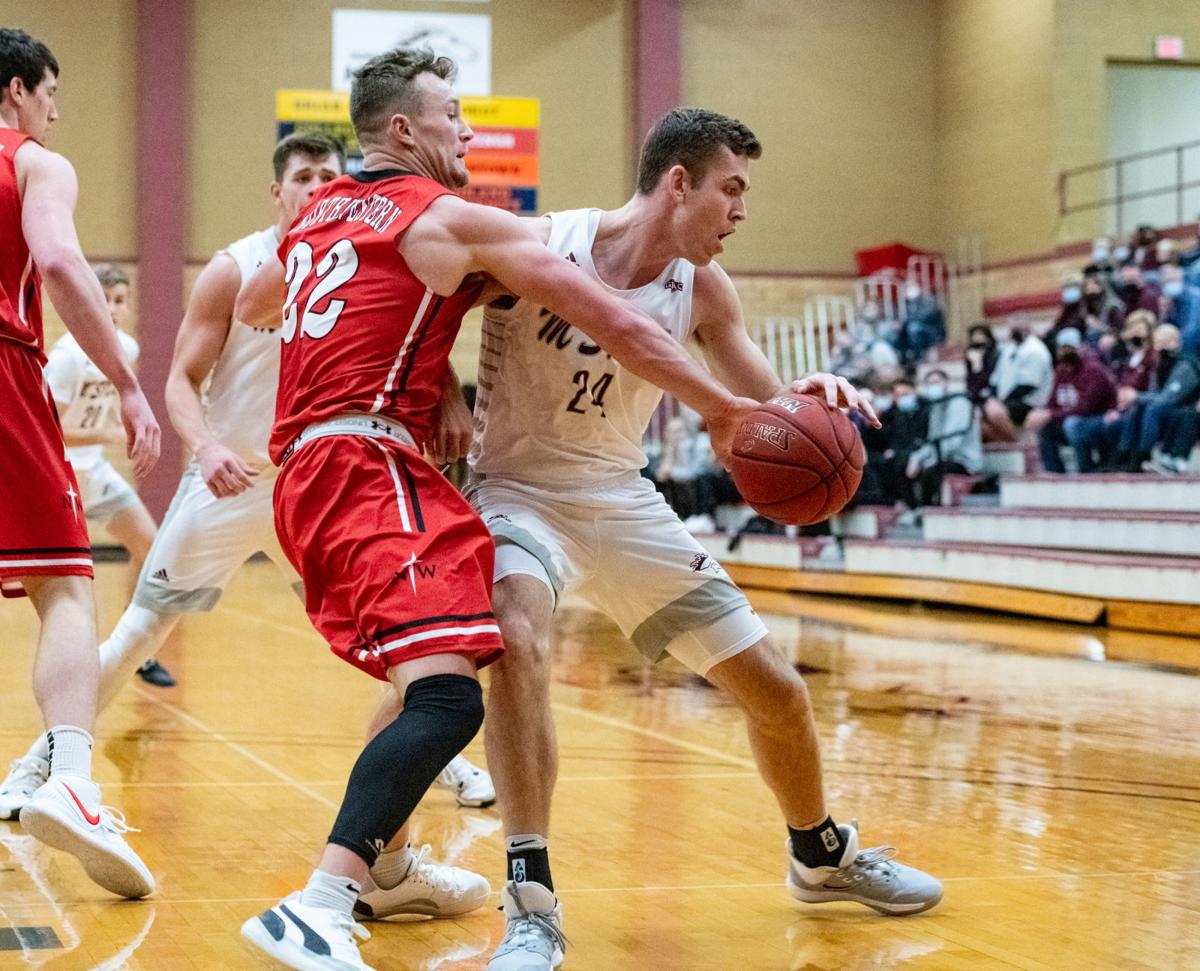 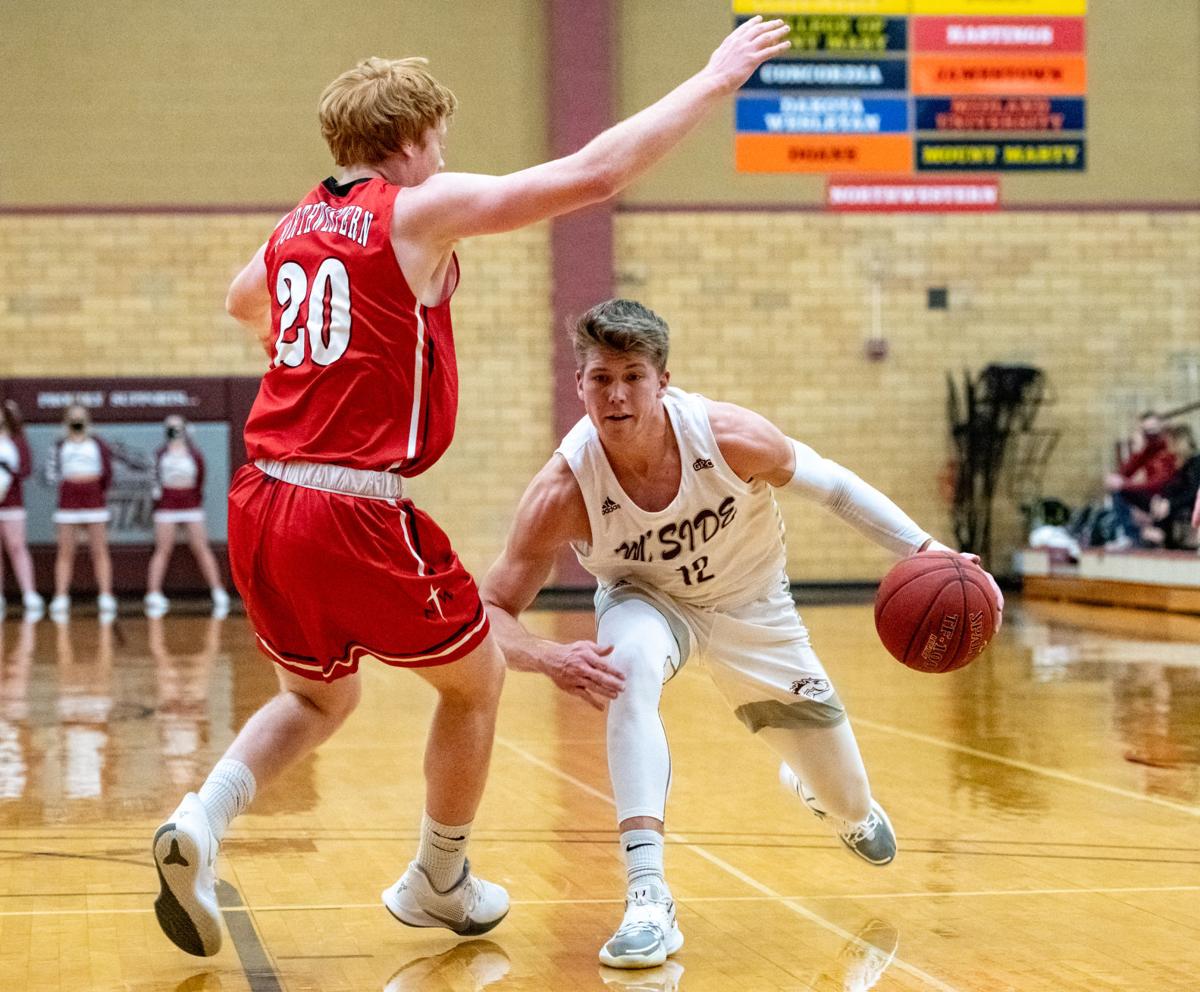 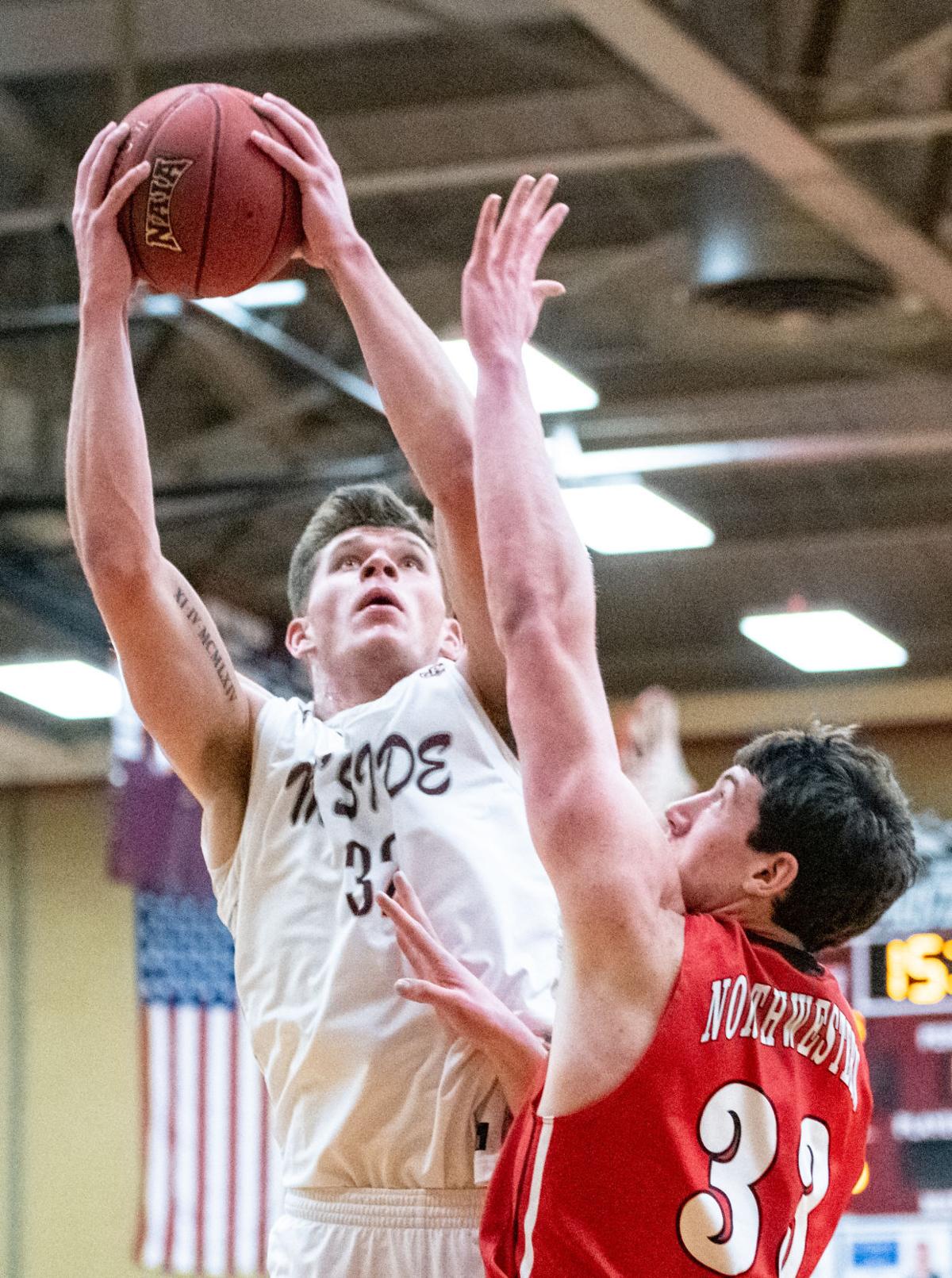 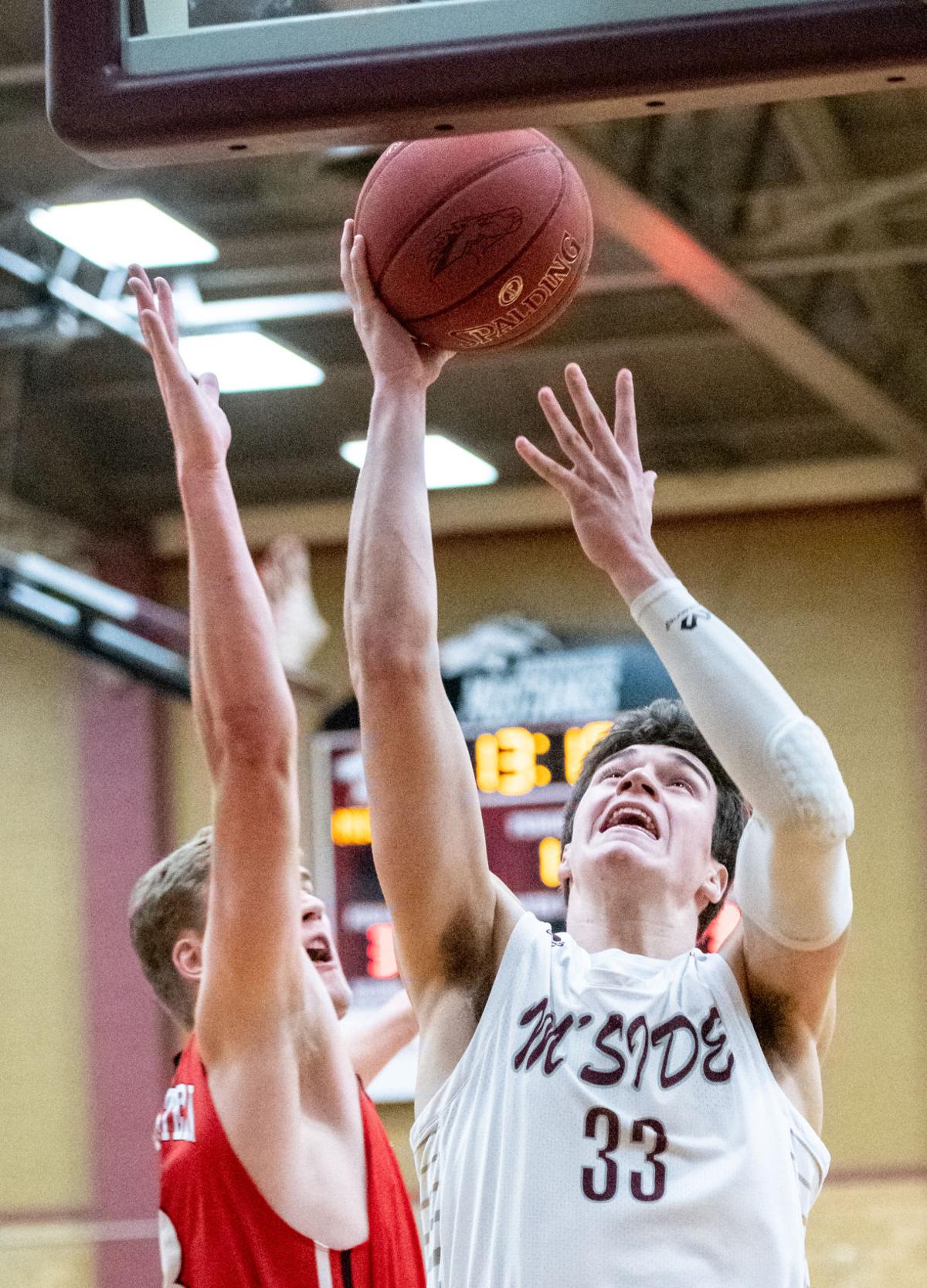 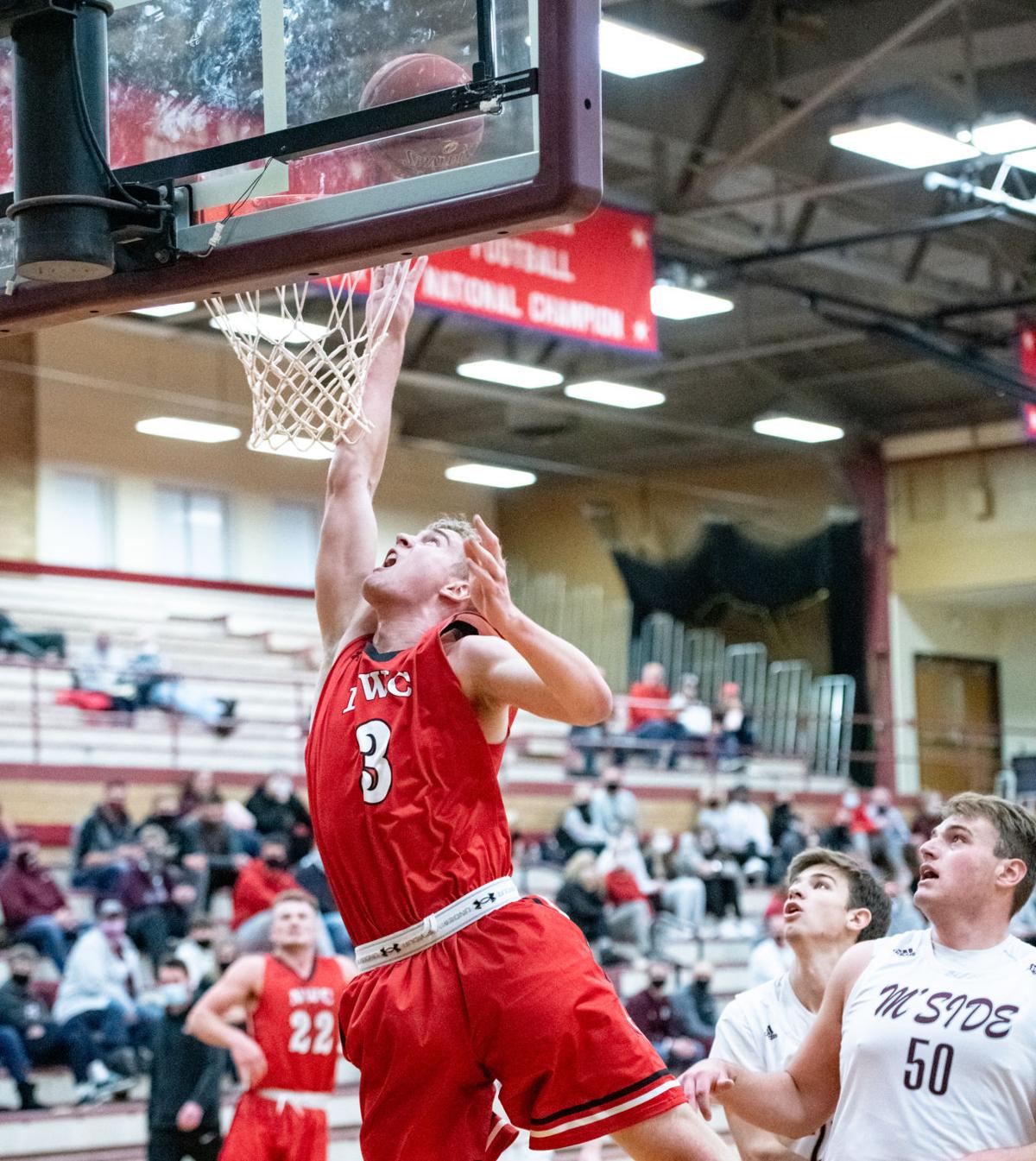 Northwestern's Craig Sterk takes a shot before his Morningside opponents can stop him during Morningside vs Northwestern college basketball action, Tuesday, in Sioux City, Iowa, Nov. 24, 2020. 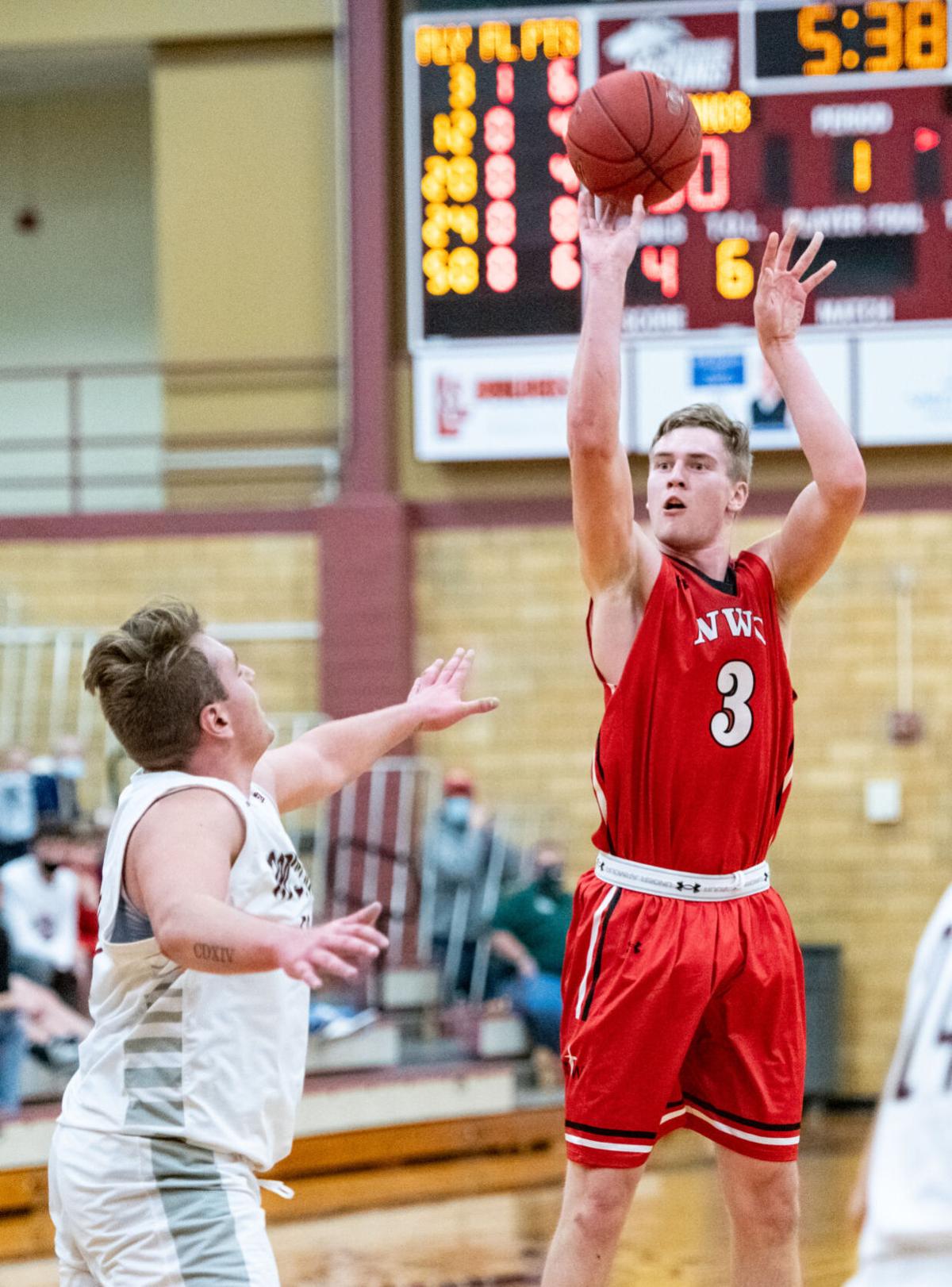 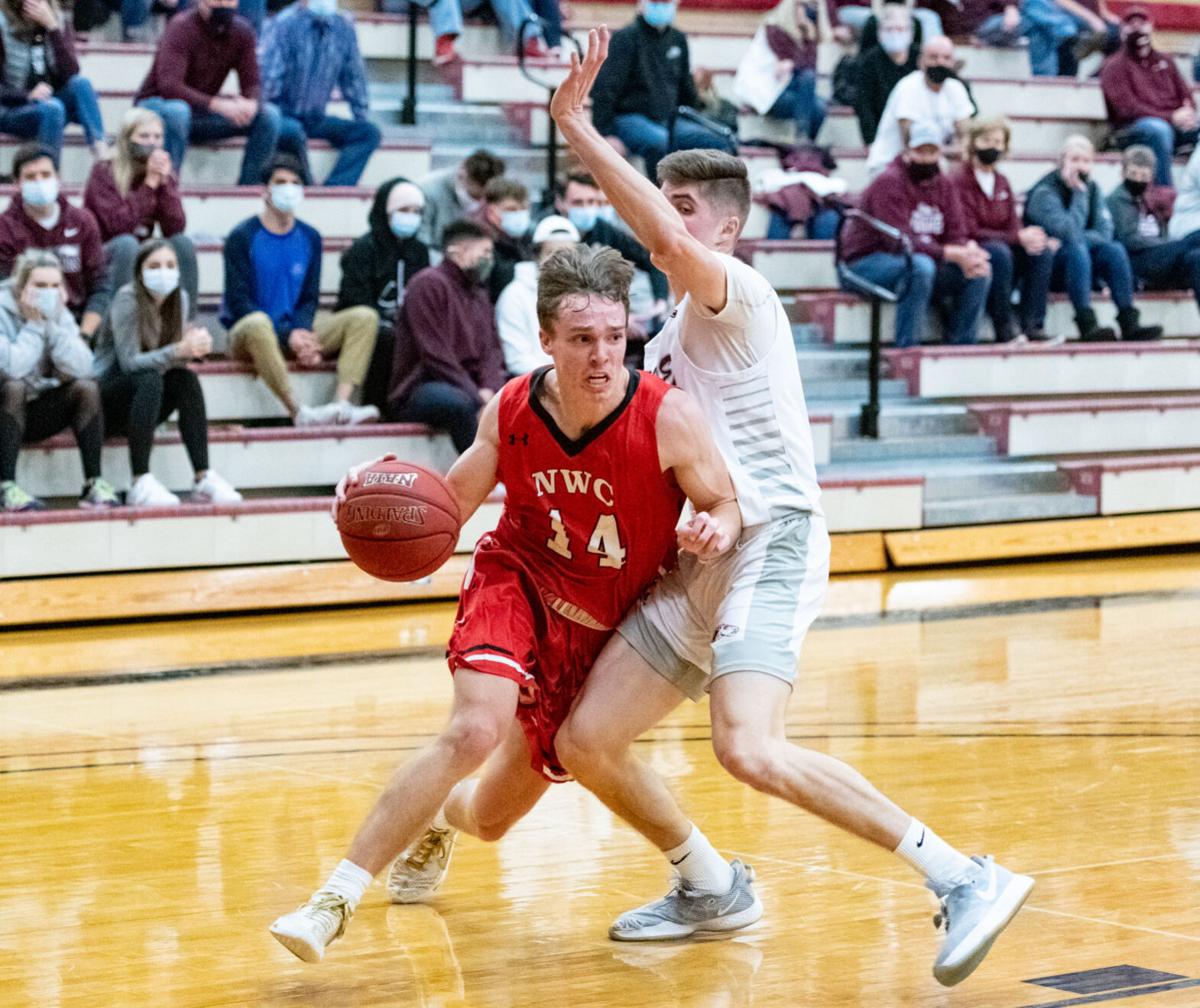 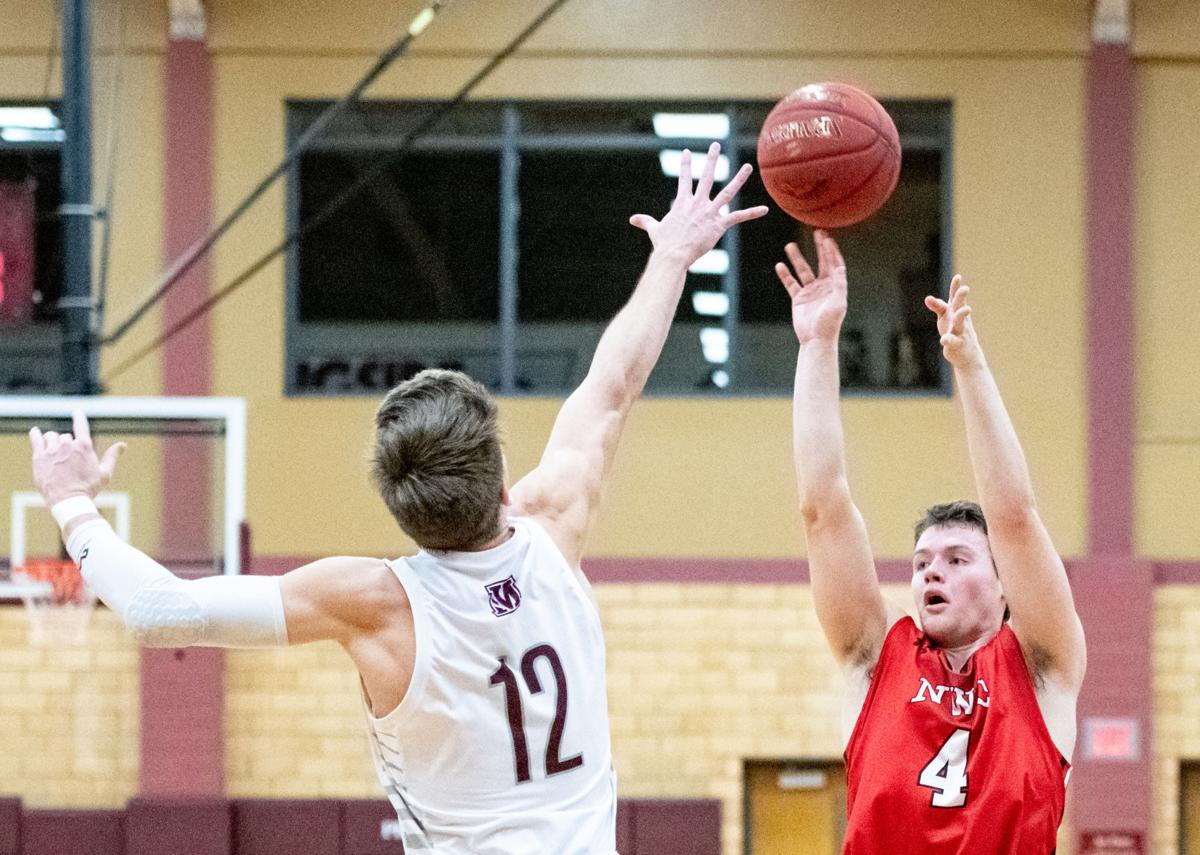 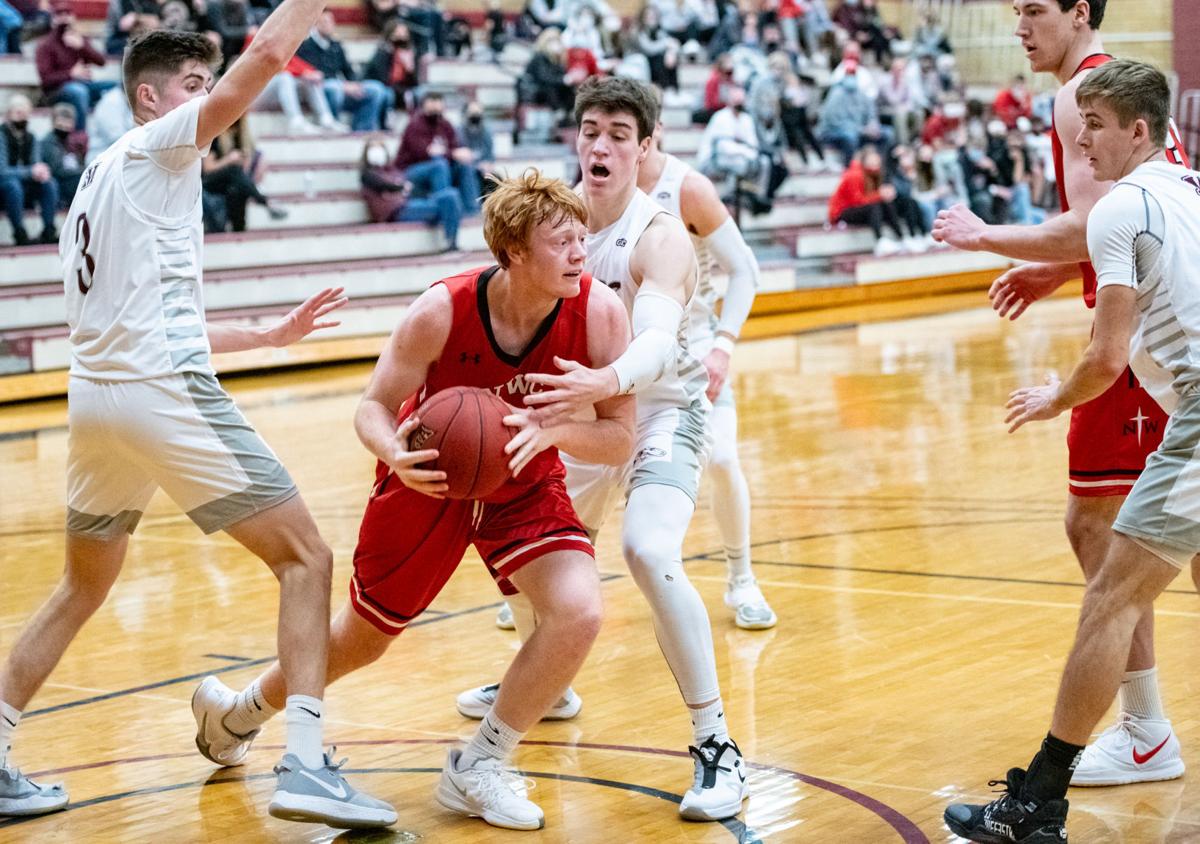 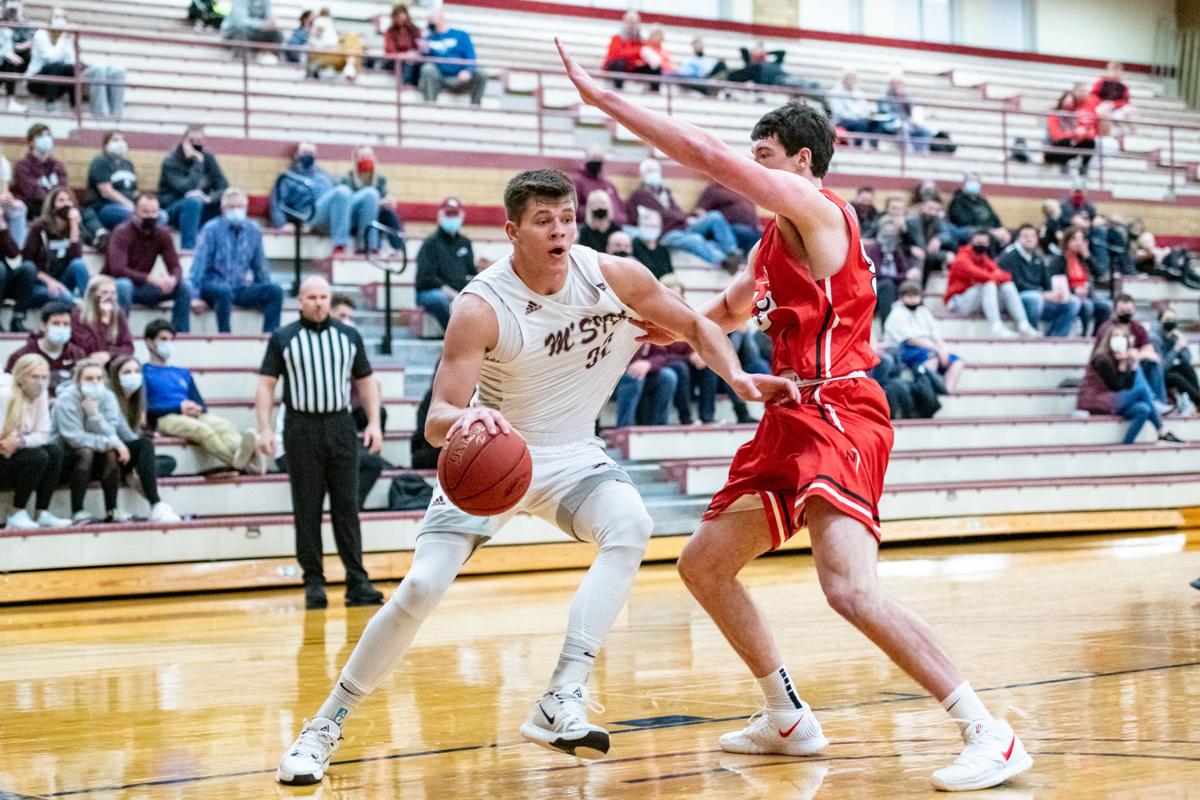 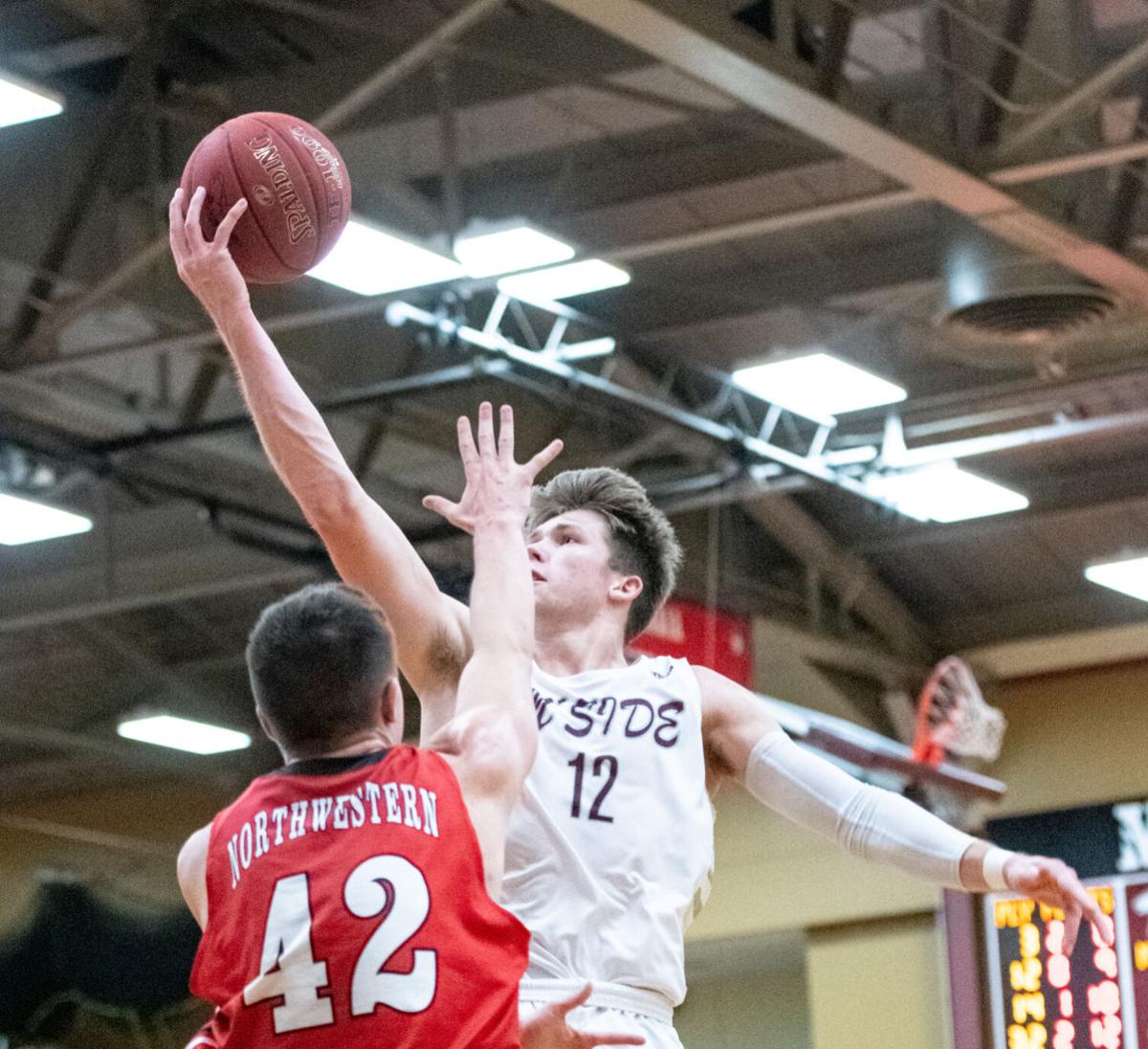 Instead, Mustangs senior Zach Imig brought up the ball and tried to call a set play but the Red Raiders' defense threw that plan off.

Imig passed the ball to Pottebaum, who was standing out on the wing. Pottebaum took a dribble to see how close to the basket he was, but Sterk and fellow Northwestern senior Jay Small stopped Pottebaum near the short-corner.

"They took 'Z' away and I went to the corner and tried to make a play," Pottebaum said.

Pottebaum took a fadeaway shot to distance himself from Small. The shot was a high-arching one. The ball bounced off the rim, went straight up in the air, and after it rolled around the iron, the ball finally went through the net as the horn went off.

“For us to come down and make a play — it’s not necessarily what we talked about in the timeout (called by Northwestern with 20 seconds left) —but I guess what they did was better than we talked about,” Morningside coach Jim Sykes said. “Thank goodness that ball went in.”

After the ball went through the net, Morningside's bench mobbed the Bulldogs graduate.

Pottebaum’s teammates also took to social media to give some love for the game-winner.

That wasn’t the only important shot Pottebaum had in the second half. After the Red Raiders led by 10, the Mustangs caught back up to the Red Raiders thanks to a 3-pointer from Pottebaum with 2 minutes, 10 seconds left in the game.

That 3-pointer from Pottebaum was one of three that he made in the game, as he scored a team-high 18 points.

“Will is a great shooter,” Sykes said. “He thinks once in a while, and that causes him to get out of rhythm a little bit. The first shot he made, he went under the ball screen and he needs to continue to do that.”

Hilbrands, a senior who went to Le Mars, hit two straight jumpers then took a 3-pointer from the wing.

Van Kalsbeek, an MOC-Floyd Valley grad, finished out the 9-2 rally with a layup after he picked up an offensive rebound.

The Mustangs weren’t willing to let the Red Raiders go back to Orange City with the upset.

Morningside cut its deficit to four in a 90-second span on three layups from Pottebaum, Imig and Trey Powers.

Once the Mustangs went to play defense, Sykes, associate head coach Trent Miller and the other Mustangs assistant coaches pleaded with their players to get another stop.

Morningside held Northwestern to four points in the final 3:20, and that came off a Sterk jumper, then his game-tying layup with seven seconds left.

“We turned it over a couple of times, and they got some easy baskets,” Sykes said. “All of a sudden, we’re down eight, 10 points. It was a situation where is it going to 20 or are we going to get to even? They were rolling. We needed to buckle down defensively.”

Throughout the game, the Red Raiders liked to slip a player down the lane on a specific play call, and that’s the play where Sterk got the game-tying basket.

However, Sykes liked how the Mustangs defense adjusted to that play, especially in the second half.

On offense, Sykes liked how the Mustangs kept moving the ball from side-to-side, so that the defense can’t stay in one spot.

Ball movement has been something that the Mustangs have worked on in practice and in games, and that worked out in the second half.

“We’re more efficient when we swing the ball from side-to-side,” Sykes said. “When that happens, we’re able to attack the rim on a hard close or catch and shoot a 3.”

The Mustangs and Red Raiders aren’t done meeting this season. The two programs will play one another in the season finale on Feb. 20.

“I can’t wait until they come to Orange City,” said Small, who led the Red Raiders with 22 points. “We, as a team, know we’re right there. Being up 10, we didn’t feel we were out of place. It’s unfortunate that they came back and won because we had momentum towards the end. They pulled it out in the end.”

Northwestern freshman Alex Van Kalsbeek gets off to fast start

The Red Raiders broke a six-game losing streak to start the season and handed the Chargers their first defeat of the year.

The Chargers sophomore grabbed an offensive rebound and put the ball back through the hoop as time expired, pushing Briar Cliff to 8-1 on the season and notching an as-of-late rare victory over their crosstown rivals.

Grandparents have bought cutouts for their grandkids. Briar Cliff dignitaries have made appearances. A baby boy was spotted by himself. And some players and coaches have been floating around the idea of buying cutouts of their pets. 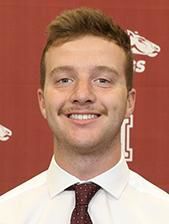