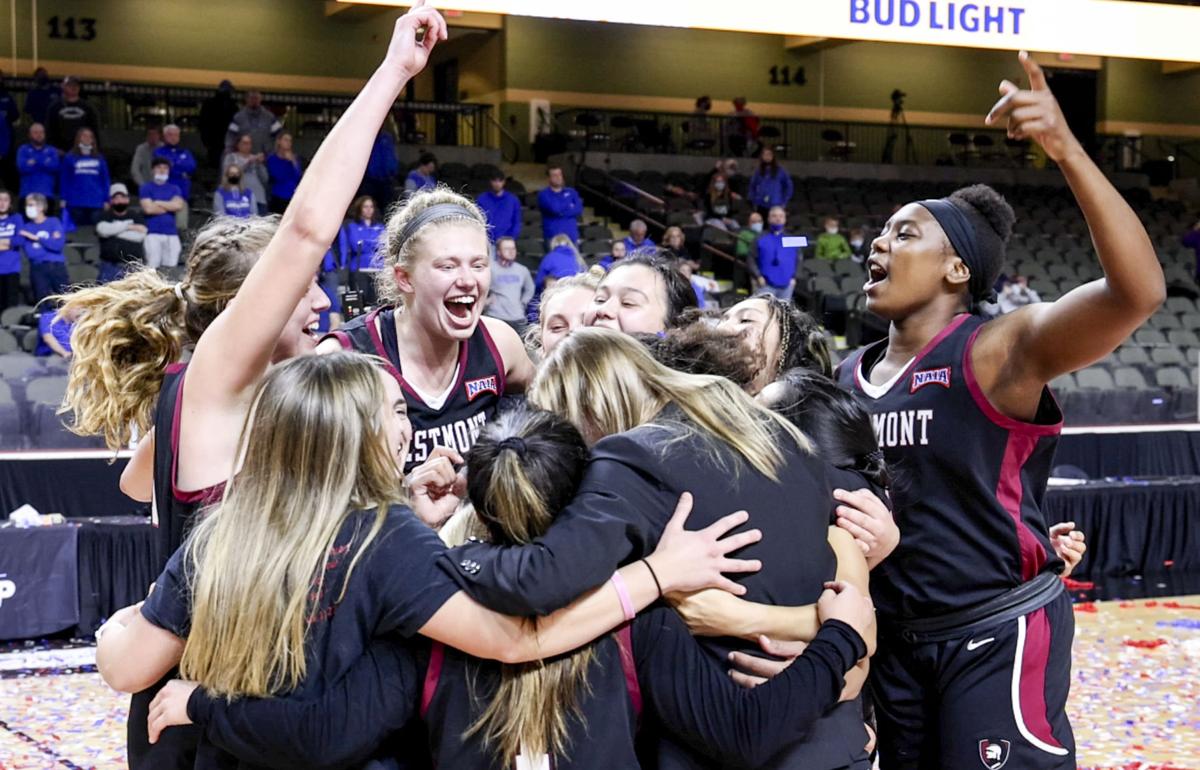 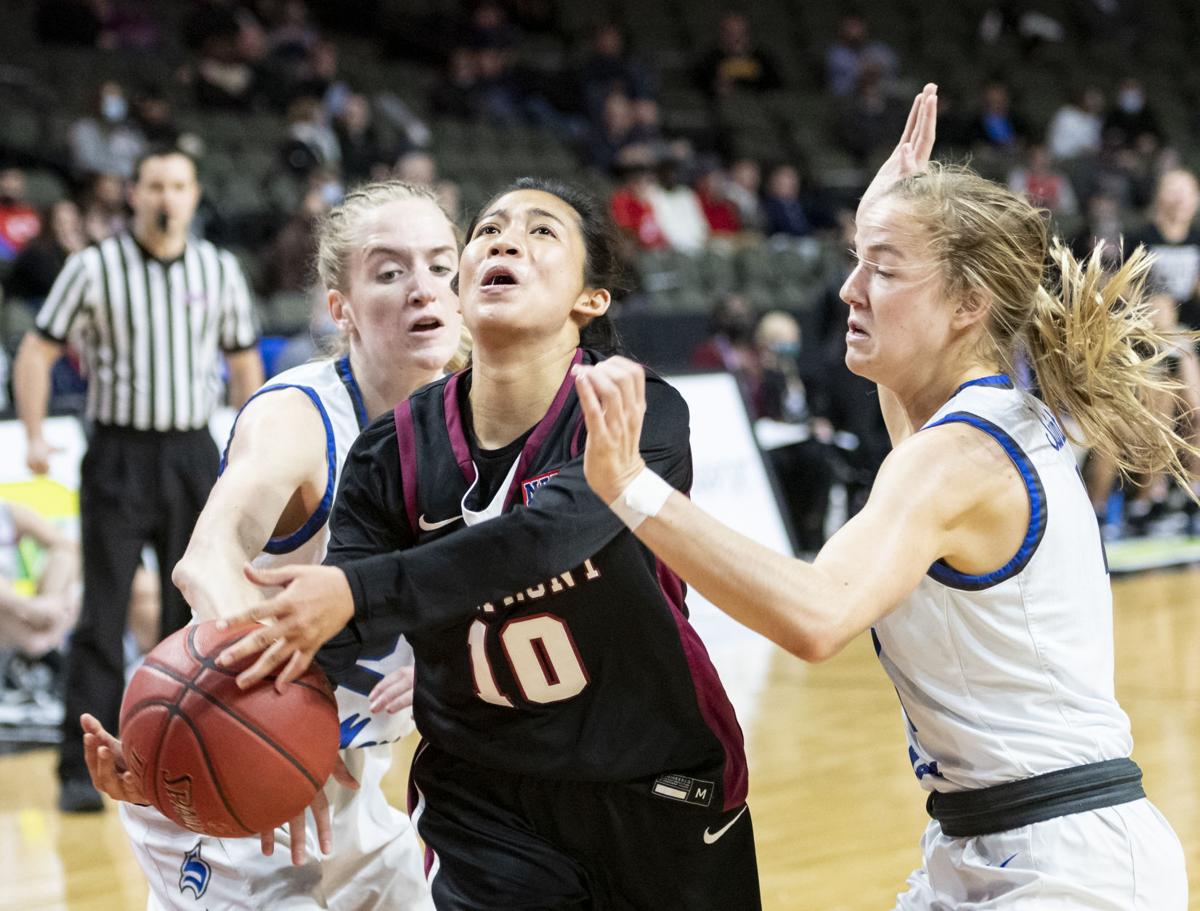 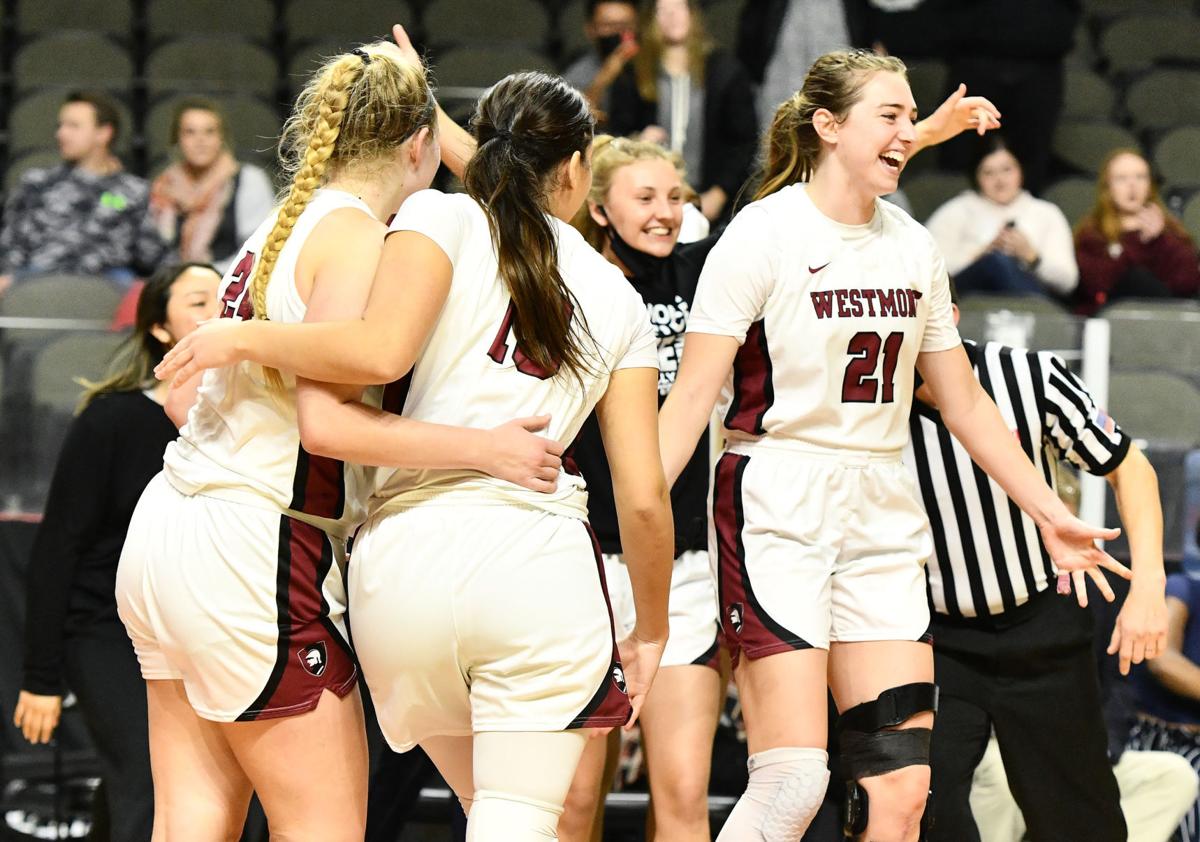 SIOUX CITY – As confetti fell from the rafters at the Tyson Events Center, Westmont College celebrated an NAIA national women’s basketball championship that was a long time coming.

The second-seeded and nationally fourth-ranked Warriors bested top seed and No. 1- ranked Thomas More (Kentucky) 72-61 on Tuesday night and carted the championship trophy back to Santa Barbara, California.

It was a bit of vindication for Westmont, which took the No. 1 seed into last year’s NAIA Division I national tourney, only to have it cancelled because of the pandemic.

“I’m so happy for these young women because of how hard they’ve worked to get to this point,” Westmont coach Kirsten Moore said. “Day in and day out, they’ve been willing to do the little things, whatever was in their control. Whether that was sandbag workouts in the back yard or basement, running on asphalt on the streets, these girls continued to put in the work so that if we had the opportunity to be ready we would be able to be at our best. I think that's what you saw throughout this whole tournament.”

This was the 24th straight year Sioux City has played host to a national tournament. The previous were NAIA Division II, but the divisions were combined into one beginning this season.

Thomas More had held down the No. 1 spot for most of the campaign and had played like it the entire tournament.

However, in its defense, it was without leading scorer Zoie Barth, who suffered a knee injury late in a semifinal victory over Morningside.

On the other hand, Westmont was fully loaded and as was the case throughout its four-win run to the national title here this week, its three guards were the catalysts.

Stefanie Berberabe, Iyree Jarrett and Lauren Tsuneishi combined for 60 points. Berberabe – the tournament’s most valuable player – and Jarrett had 23 points apiece and Tsuneishi tacked on 14 points.

Tsuneishi, one of just two seniors on the Westmont roster, earned the tournament’s hustle award. 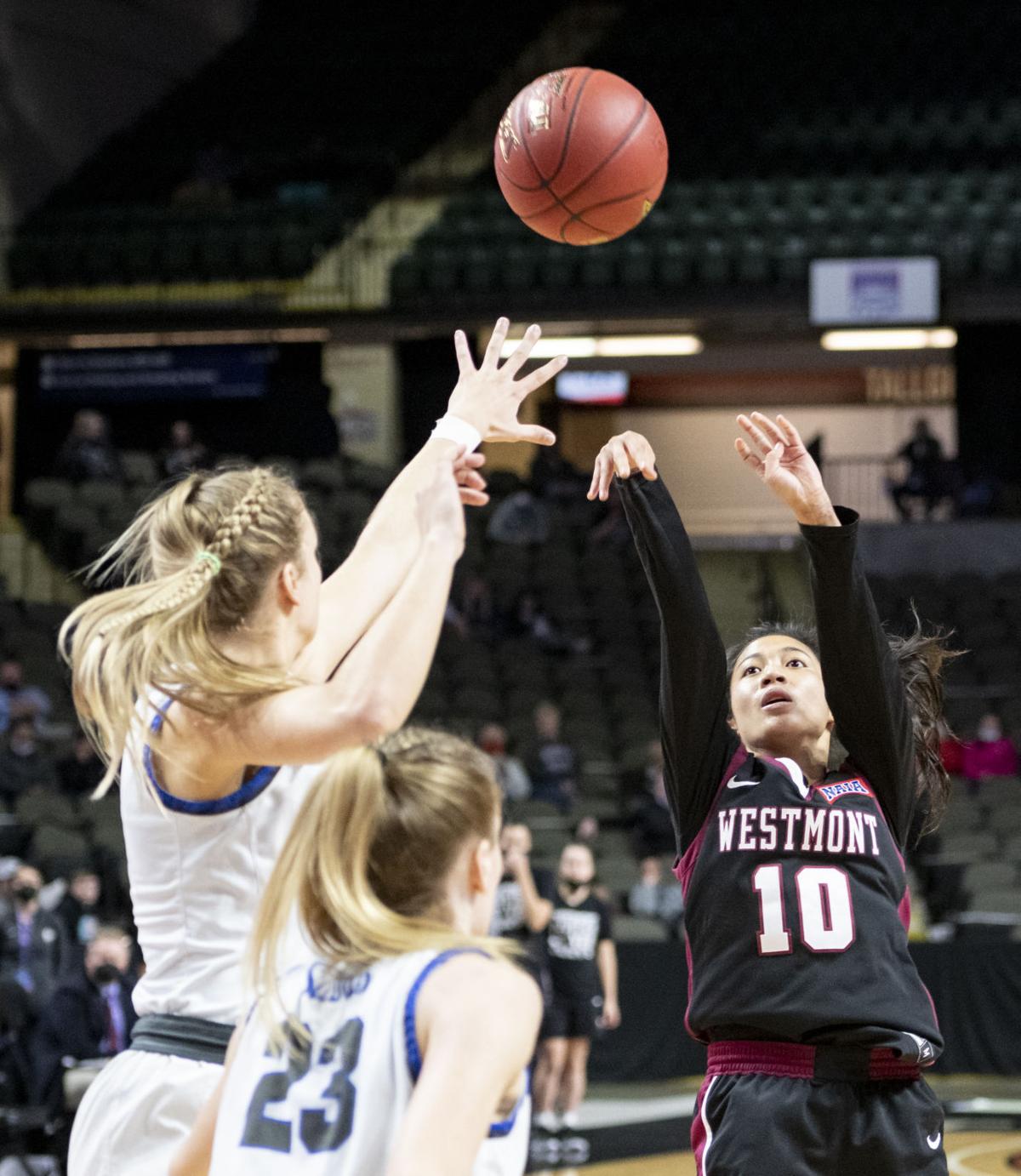 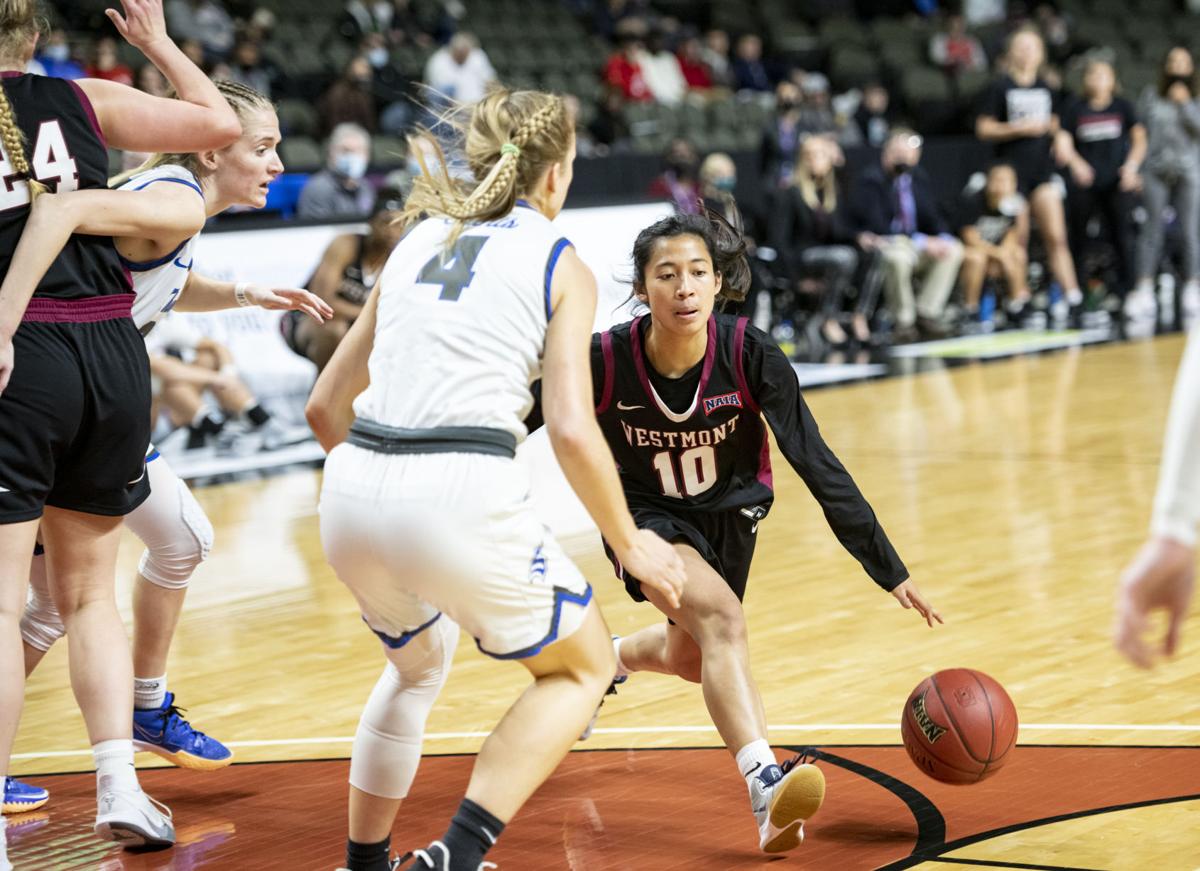 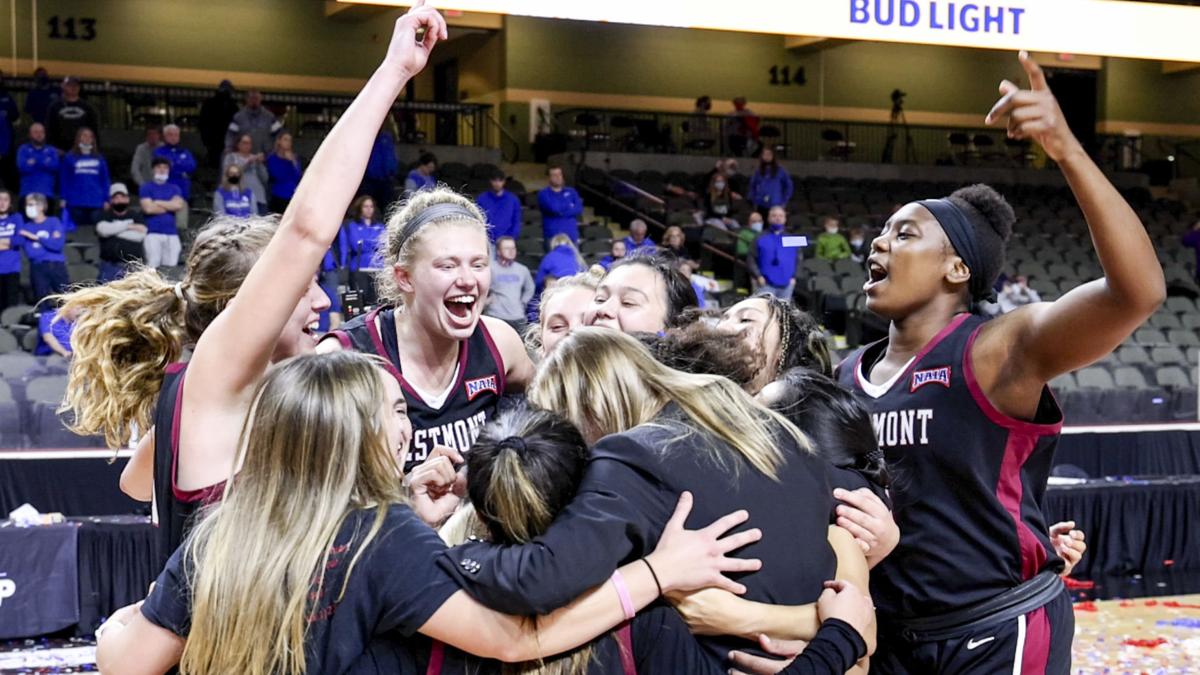 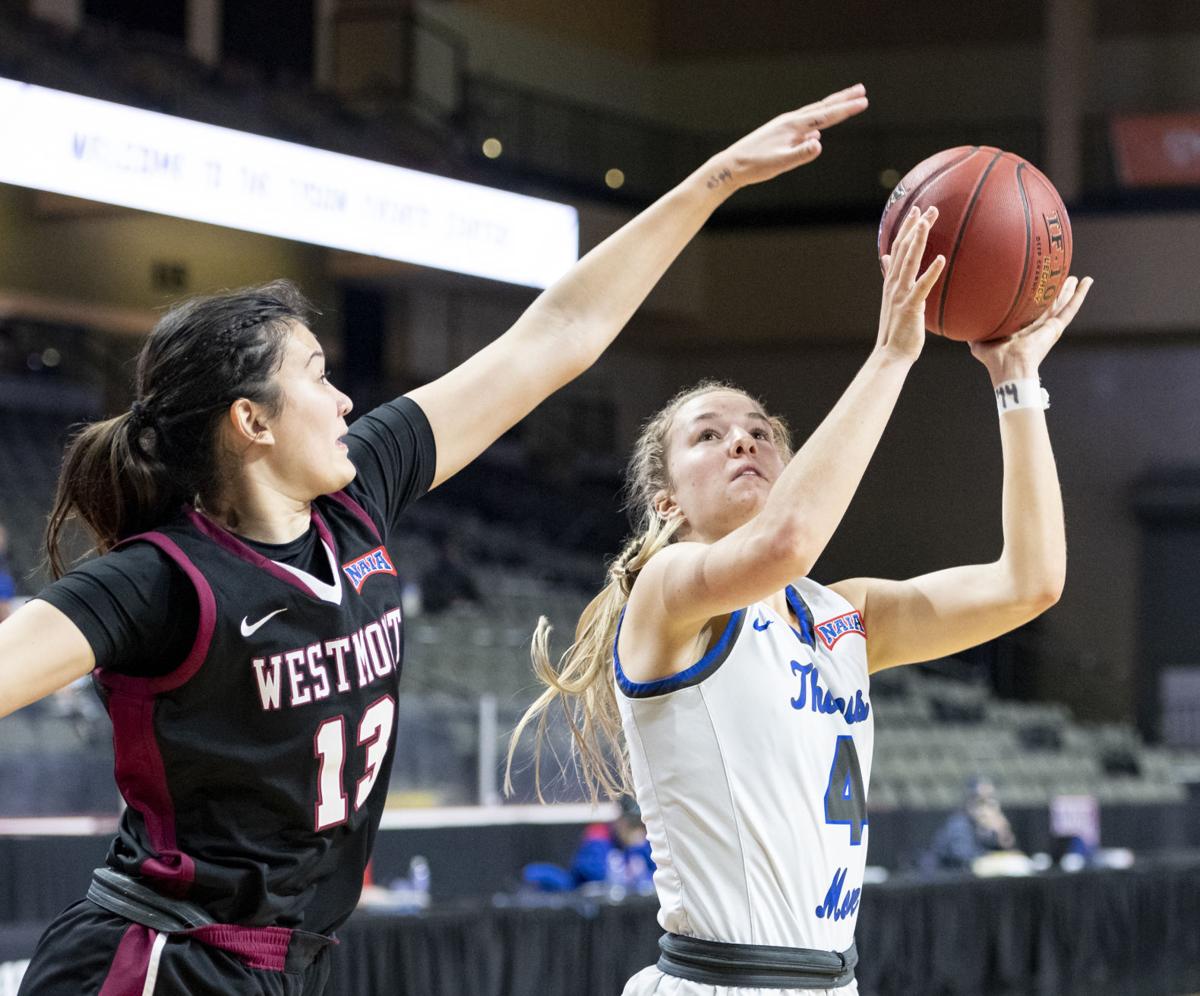 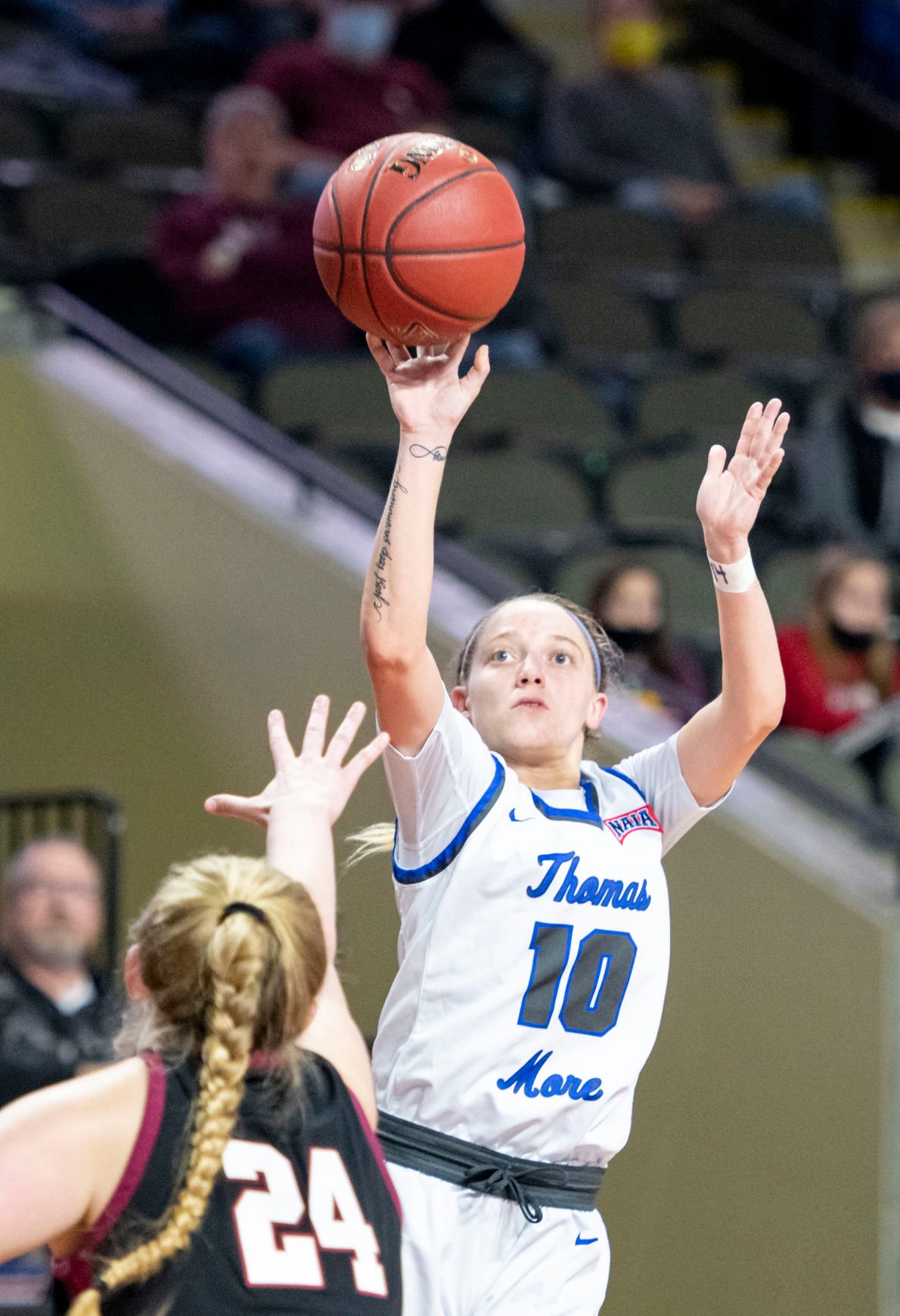 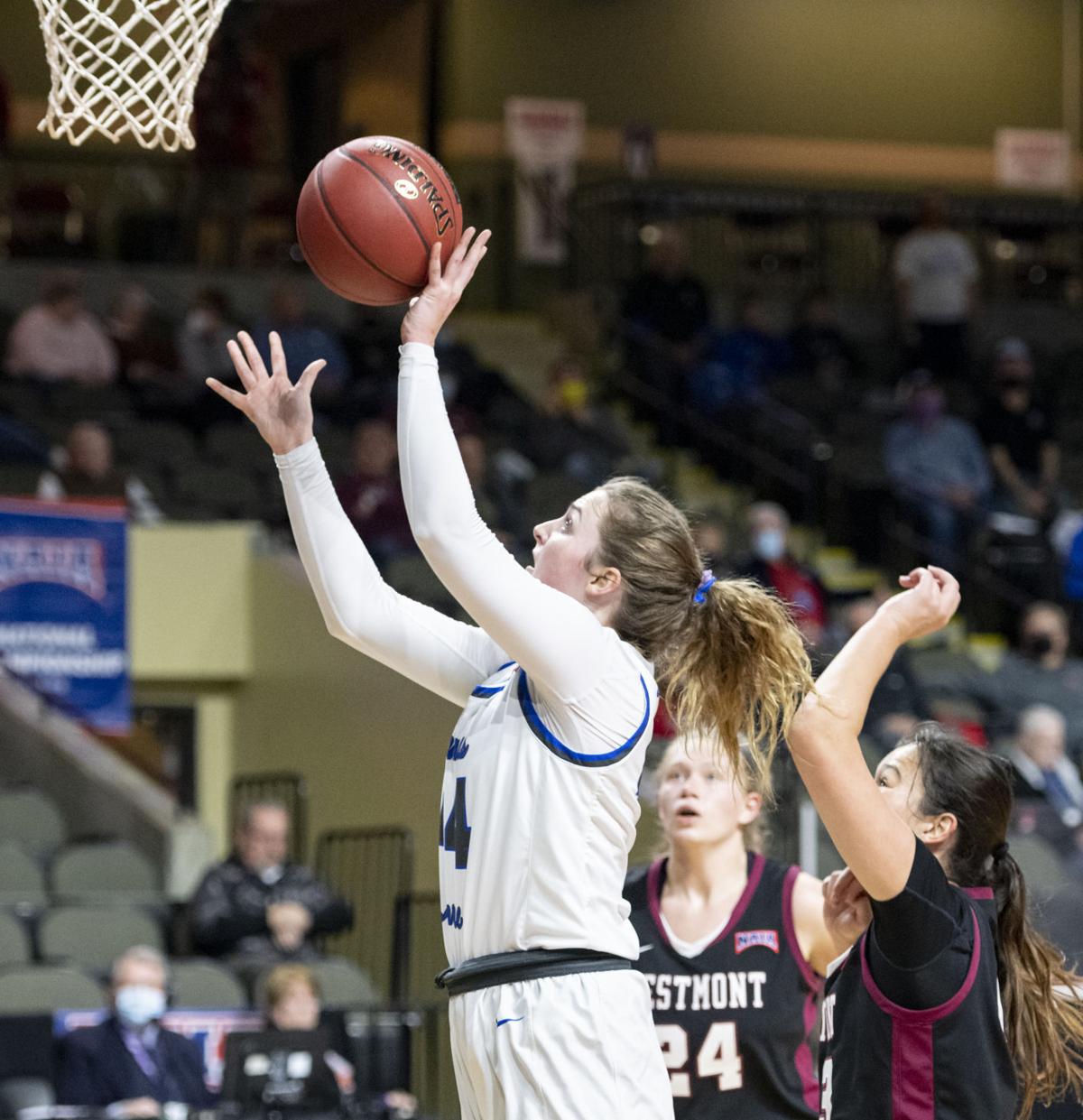 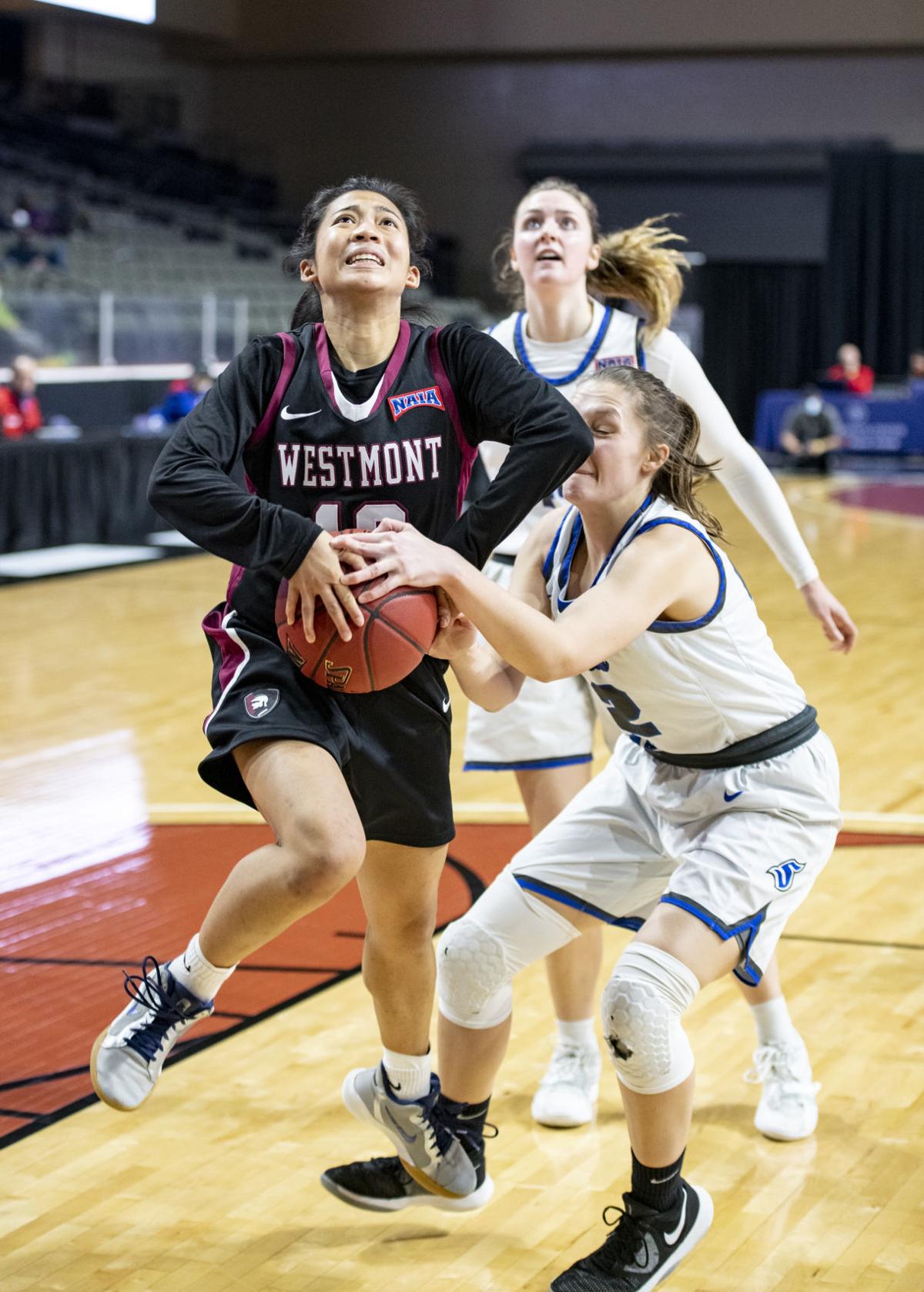 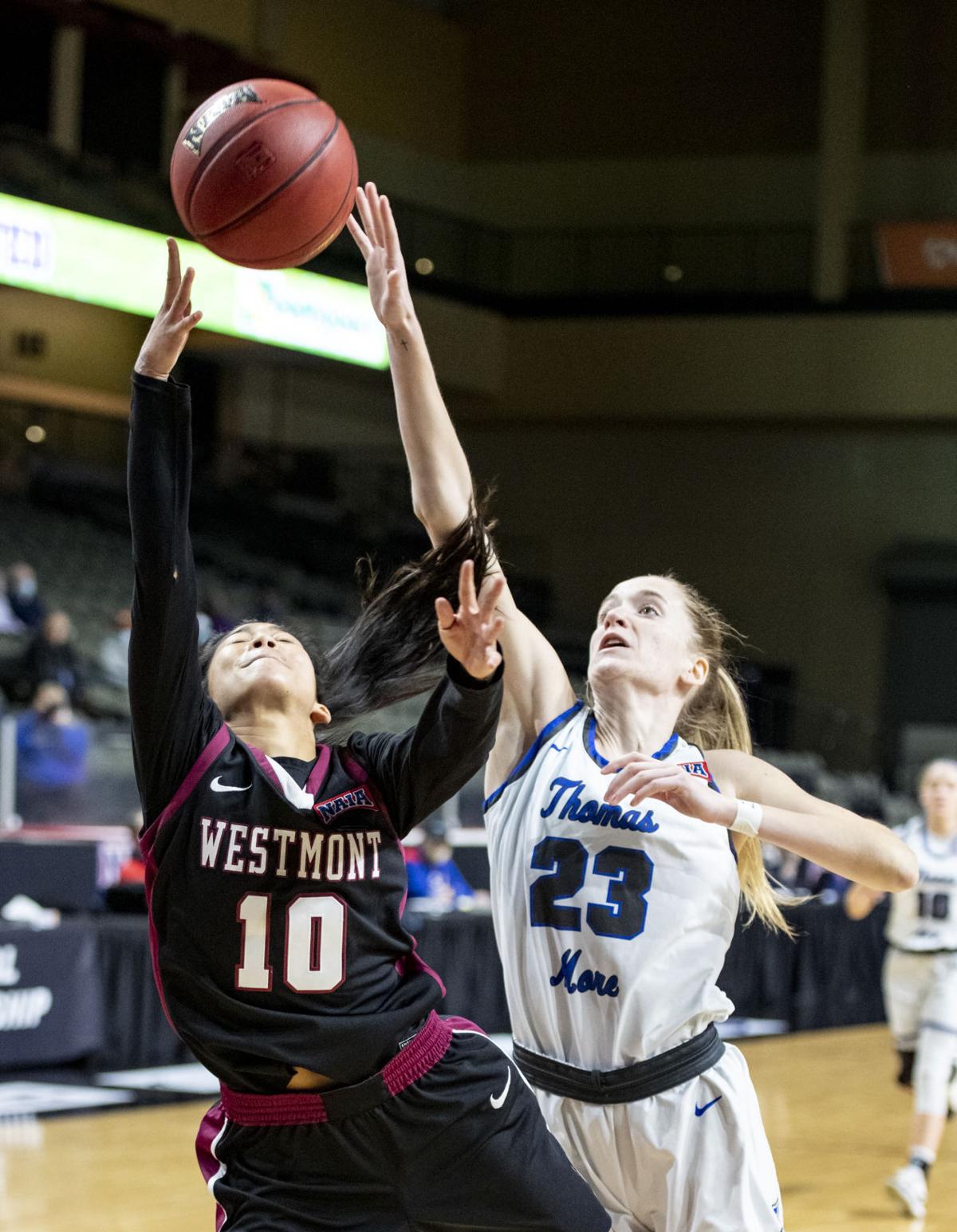 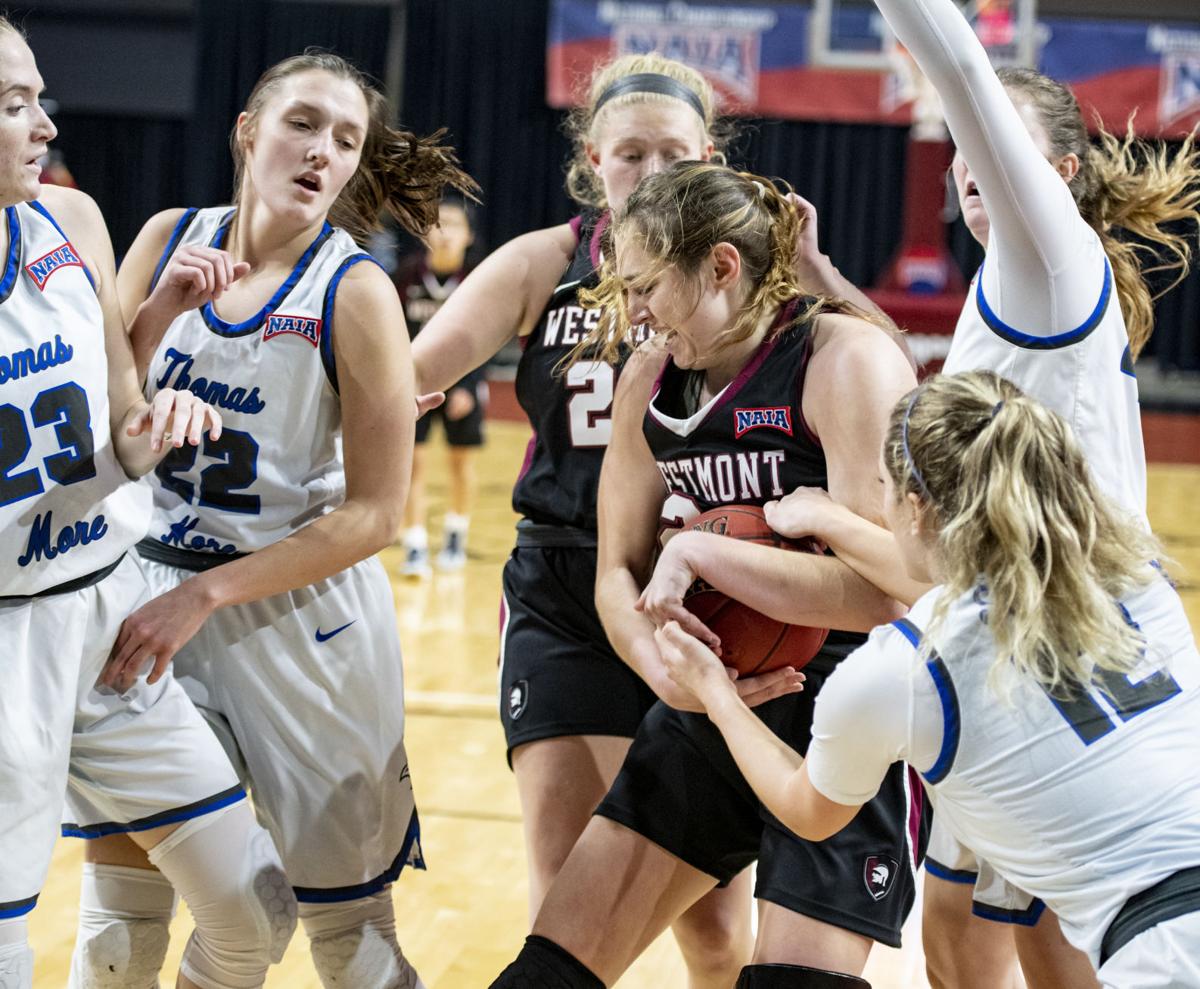 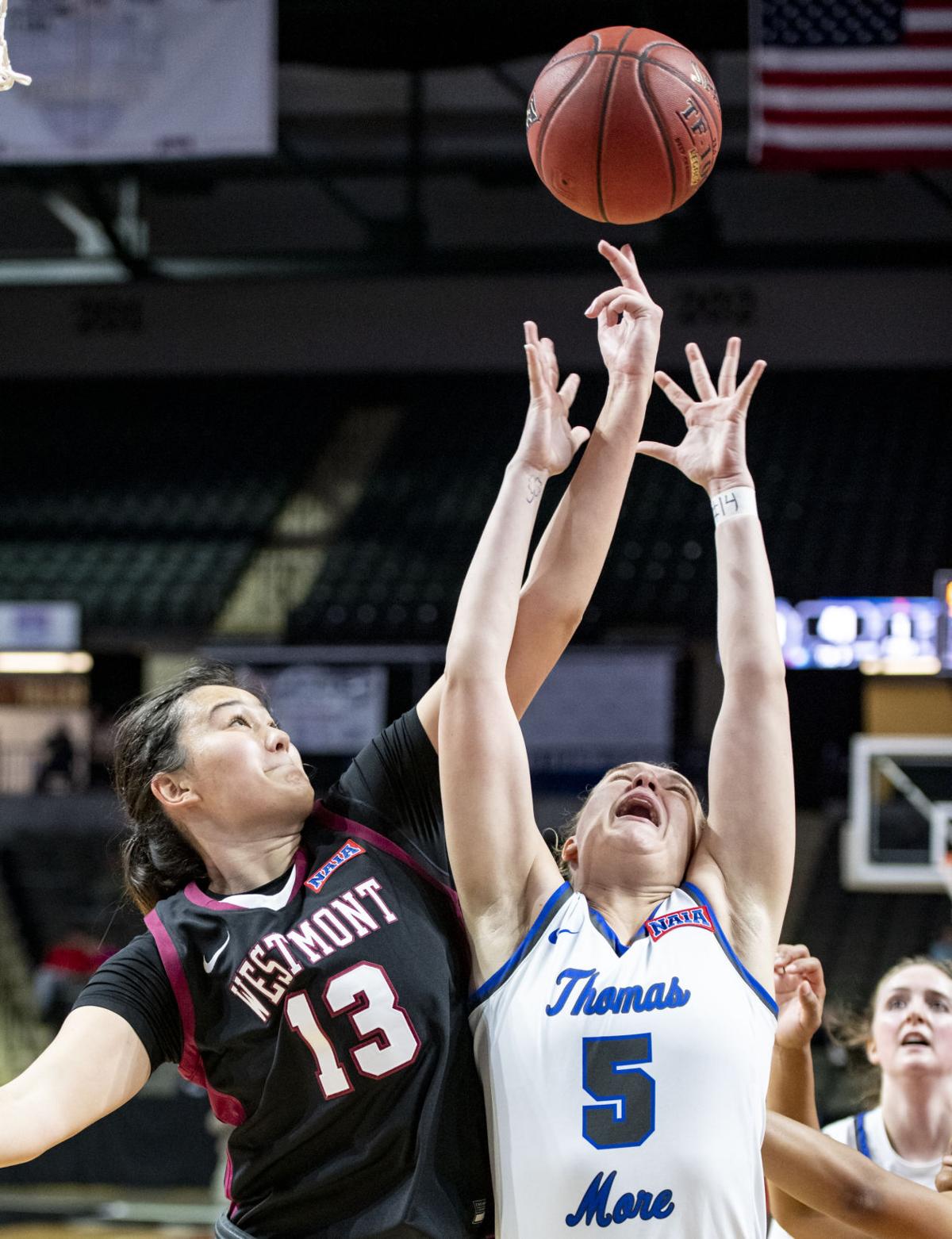 Westmont's Gabriella Stoll tips the ball away before Thomas More's Kenzie Schwarber can grab a rebound during Thomas More vs Westmont basketball action in the NAIA women's championship at the Tyson Events Center, Tuesday in Sioux City, Iowa, March 23, 2021. 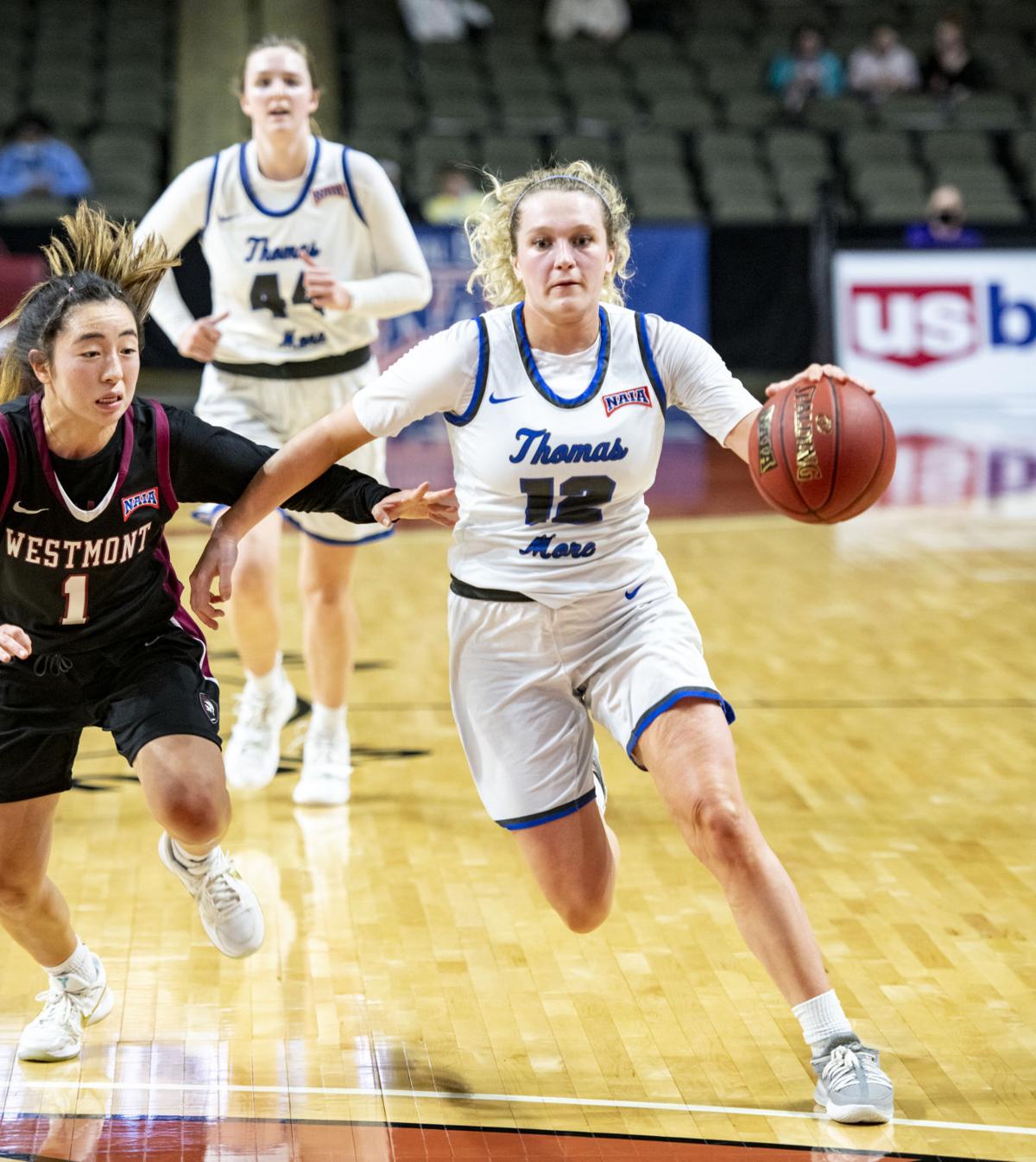 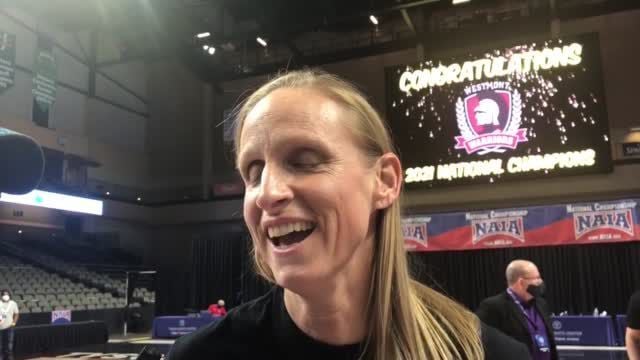 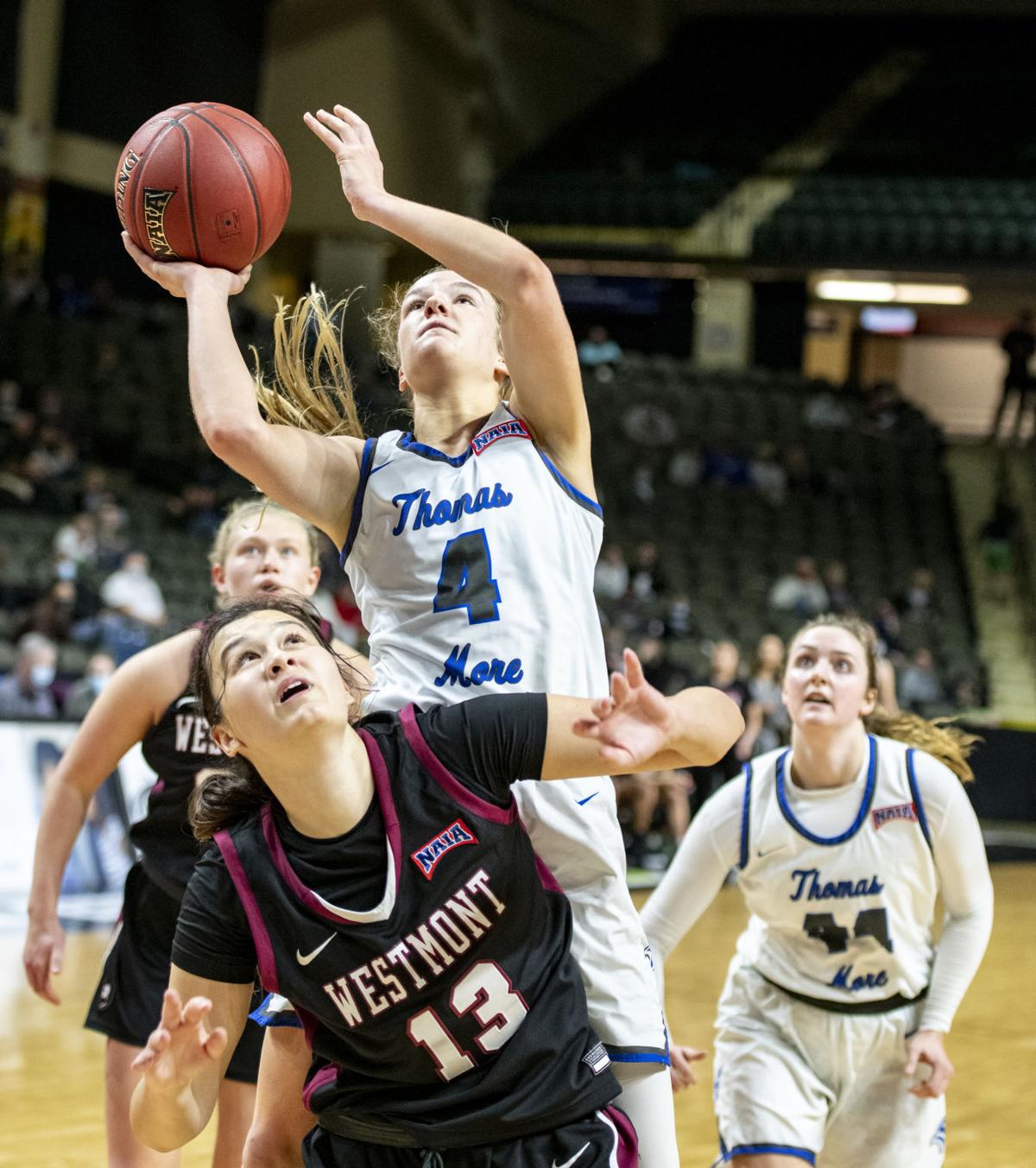 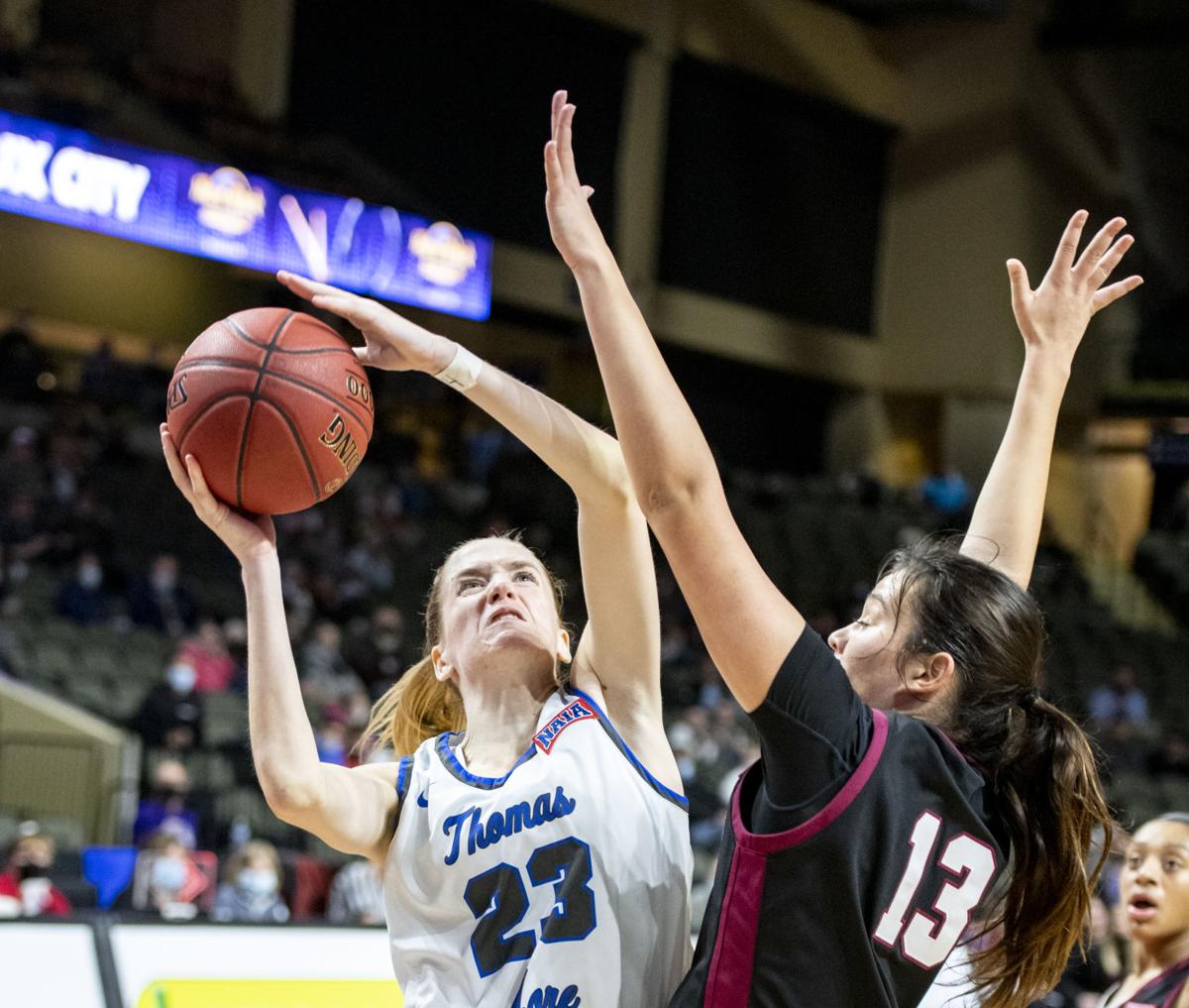 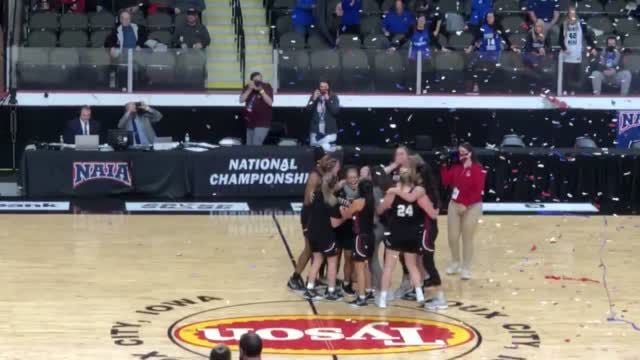 “I’m just super overwhelmed and proud of my team,” Berberabe said. “This game was a really close one and Thomas More was ranked No. 1, but we came out and attacked them. We just showed a lot of heart and grit. Some things that didn’t show up in the stats really showed up.”

Thomas More, which finished at 29-2, had the upper hand early. The Saints made five of their first six shots and bolted to a 17-8 lead before Westmont scored the final seven points of the quarter.

A 3-pointer by Jarrett, a 5-5 junior, with 3:56 left in the second quarter gave Westmont its first lead. That snapped a 22-22 tie and the Warriors never trailed the rest of the contest.

Every time Thomas More crept close, one of the guards would either drive to the hoop or hit a three. Also, Gabriella Stoll, a 6-foot junior, made three 3-pointers and scored nine points.

Kaitlin Larson, a 5-11 post, had just three points, but raked down a game-high 13 rebounds.

Westmont led 34-28 at halftime and 46-41 at the end of the third quarter. Thomas More pulled within 51-48 on a 3-pointer by Taylor Clos with 7:33 left in the game, but back-to-back 3-pointers by Tsuneish pushed it back to a nine-point lead.

“That’s been a staple of this team is that we don’t get flustered,” Moore said. “I called a time out and said we had to regroup and focus on defense and rebounding and they did it.

“From the time out, which was basically at the five-minute mark (of the first quarter), the second five minutes we were able to get within one possession by the quarter.”

Westmont, which won the NAIA Division I title in 2013 and was runner-up in 2018, played just 12 games before traveling here for the Round of 16.

Stringent protocol in California meant that the team could only play against teams that were tested. So, there were long stretches during the season when the Warriors could only practice and not play games.

“Just being in this tournament was a great opportunity that not everyone gets. Because of COVID and all the restrictions, we’ve all worked hard at being cautious," Berberabe said. "The self discipline and love we have for each other really shows on and off the court.”

Westmont’s only loss this season was to NCAA Division I Pepperdine in its opener on Dec. 5. The Warriors didn’t play another game until Jan. 16 and have a 27-game win streak against NAIA schools.

Thomas More was paced by Emily Simon with 14 points. Summer Secrist came off the bench to add 13 points, while Clos scored 11.

The Saints tried to rally around their injured teammate, but shot just 38 percent from the field. Thomas More is also a young team, so expect these two to be back in the mix again this time next year.

Westmont’s Berberabe and Jarrett, along with Thomas More’s Clos, were named to the all-tournament first team. Others on the first team were Sierra Mitchell of Morningside and Anne Secrest of Indiana Wesleyan.

1: First national champion crowned outside of the Midwest since tournament moved to Sioux City