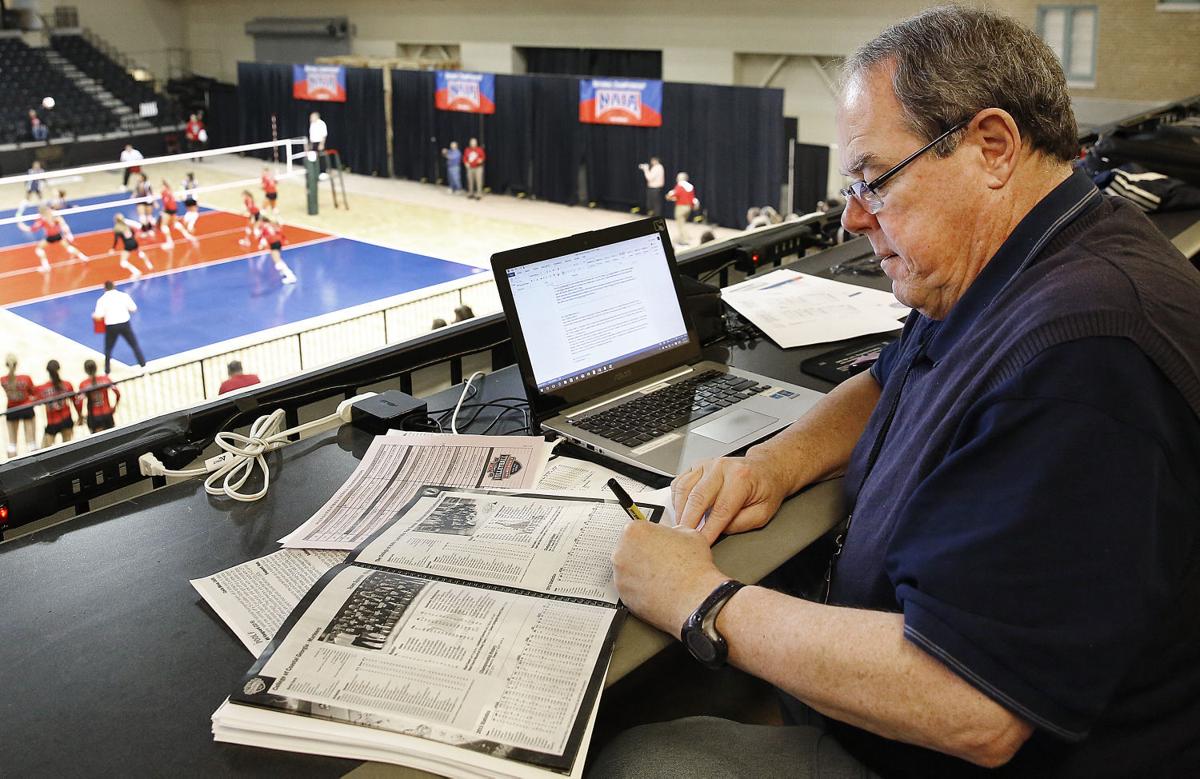 Journal sports editor Terry Hersom takes notes at the NAIA Volleyball National Championship at the Tyson Events Center in Sioux City on Dec. 3. Hersom will retire on Dec. 31, ending a 38-year career as head of the Journal's sports department. 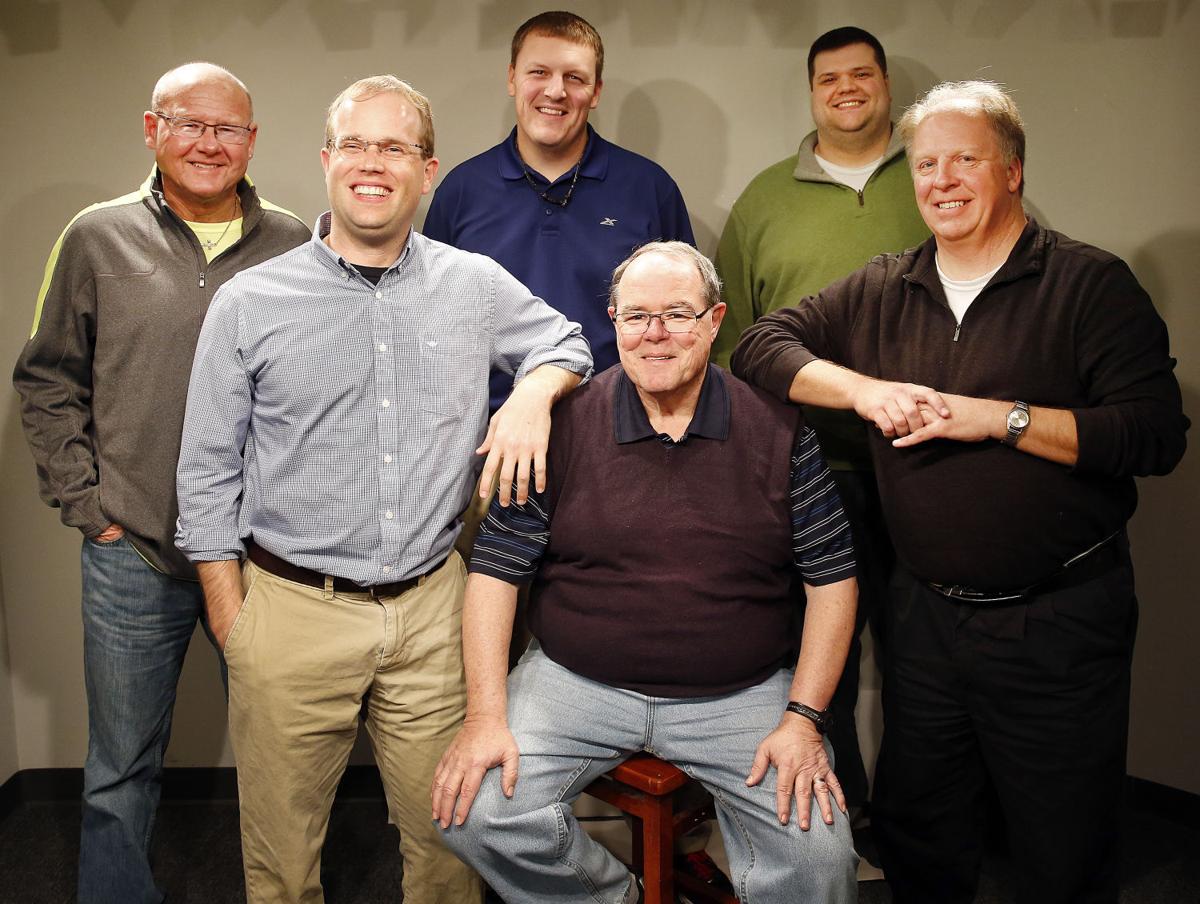 SIOUX CITY | I was sitting in the student union at the University of Northern Iowa, strumming my guitar and singing folk songs.

Make a big enough scene and people tend to gather. And, since campus security hadn’t come around to stick a sock in me, I just kept singing. This was, after all, still the '60s, although only for another seven months.

Lo and behold, someone offered up a request that didn’t involve playing "Far, Far Away." I could never remember the lyrics to that one, anyway. So, I smugly pressed my luck and pointed to a girl I’d been watching in measured glances, fearful of being too obvious.

Boldly, I declared, 'I’ll sing (whatever the song request was) if she comes over here and sits by me.' "

To my utter surprise, she did.

Forty-six years later, she’s still here, which makes it that much easier as I prepare to disengage from 46 years in journalism’s toy department.

I can’t swear I won’t bother you with periodic columns somewhere down the road, but that’s still up in the air.

For now, I’ve had just enough cards, letters, voice mails, e-mails, tweets and face-to-face tongue-lashings to constitute a significant hint. Waiting around for the tar and feathers would be just plain foolish.

You only wind up in this line of work because it sounds like fun and because fate gets your foot in the door, complete with a paycheck sufficient enough to pay a few bills. I was a senior at UNI when that first job presented itself. If I told you how that happened, you’d never believe it. And, as I think back over all this time, there are plenty of other things even I don’t believe.

My “big brother” Bob, was a 95-pound halfback from Franklin Junior High in Cedar Rapids, which still sits just across the street from the house where I grew up. While our father headed off in all directions to play his clarinet and saxophone, we both began thinking how we’d like to be Gus Schrader, the longtime Cedar Rapids Gazette sports columnist. Near as we could tell, Gus apparently picked up his phone every day, called anyone that came to mind and then shared his discoveries under the heading “Red Peppers.’’

The first step was to realize there’s only one Gus Schrader and you have to be whoever you are. So, while Bobby went to Vietnam and I hunkered down in Cedar Falls, spared by a high number in the first draft lottery, we both pondered all of that.

Flash forward just a few years and it was all beginning to happen. He landed in Oklahoma City and I wound up here. Next thing you knew, two kids raised in the same bunkbeds both wound up voting for more than 30 years on the Heisman Trophy, selected by a panel of around 900.

Do anything long enough and the sheer volume of experiences can get a little overwhelming.

One time a few years ago, after two evenings with the great Ferguson Jenkins, it occurred to me that I had chanced to interview quite a large number of Baseball Hall of Famers over the years. So, I went to the Cooperstown website and commenced counting, finally stopping when I had reached 30 and knew I wasn’t finished.

That’s not what being the Sioux City Journal sports editor is about, of course. This is a job more rooted in area high school and college sports. So, the treasured memories are more about the homegrown heroes, male and female, I have seen grow up, especially the many I have come to know delightfully well.

I always meant to add up all the state team championships I’ve been privileged to write about, but I’m more content to flash back to this one or that one, always shaking my head over how seeing young people fulfill a dream made my eyes embarrassingly misty.

I’m not a fan of lists like favorite interviews or games. How many overtimes was it, Stuart? I’ve had some incredible interviews and I’ve covered some amazing games. I haven’t seen everything, though. Not even close, I’ve decided.

If I taught a class in sports journalism or “real journalism,’’ I’d encourage my students to steer clear of anything as trite as this. Ditto for clichés like “when was the turning point?” Every athletic contest is unique and that means different in at least some way or ways from all the rest. Working on deadline, you may not always find it. Still, without letting your brain explode, you should come as close as time permits.

A little over five years out of college, most of it at the Ottumwa Courier, I was invited to Sioux City for a job interview with Dean Krenz, publisher of The Journal. I couldn’t talk him out of hiring me and I still, hand on a Bible, remember what I worked on that first night here on Sunday, Nov. 27, 1977.

I was blessed to inherit a staff that included Dick Champ, Ron Malchow and Russ Ward, whose first assignment here in the summer of 1948 was to interview Babe Ruth, mere weeks before the Bambino’s death.

We made lots of changes in a few short years and that crew tolerated this young kid lacking patience or tact to such a degree it honestly appalls me now.

My longtime friend, Steve Allspach, came aboard in January of 1981 and we’ve had remarkably few changes over all this time. Barry Poe, Jerry Giese, Jason Cowley and Jeff Budlong, the veterans still on board, have all made life easier for me and I’ll never be able to thank them enough.

Bobby died June 27, 2011, a belated casualty of war, and I lost the sounding board through which I always tried to grow as a writer. I thanked him then as I sniveled my way through a eulogy in front of a large gathering that included the great Barry Switzer.

I’d be remiss without mentioning Alan Hoskins, my former colleague who showed me the ropes before leaving Ottumwa just a few months before I did. He’s become a legend in Kansas City, where a friendship with Tom Watson got him a tee time last June at St. Andrews, less than three weeks before my homeboy, Zach Johnson, won The Open Championship on the birthplace of golf.

Erwin Sias, Cal Olson, Larry Myhre, Mitch Pugh, Chris Coates and Bruce Miller -- the editors-in-chief for whom I’ve worked here -- have all given me plenty of freedom to do my job the way I saw fit. That included ambitious support and coverage of several prestigious events ranging from professional golf to fast-pitch softball to women’s basketball and volleyball.

I hope Sioux City will always try to recruit and promote these types of events because you do all of this better than anyone.

Knock on wood, I’ll be around to spectate or even help out.

I’ve learned to take nothing for granted, though, having lost both parents, a brother and then a baby sister, Heidi, who was just 48 when she died quite unexpectedly last May 27. A lifelong friend hit the nail on the head when he called that “a crusher.’’

Fortunately, I have two terrific sons and their wives, four grandchildren with another on the way, and that music-loving co-ed from Royal, Iowa, who has promised me an enjoyable retirement if I can somehow pass what she calls my “trial period.’’

GIESE: Saying goodbye to a coach, teacher and a boss

Sorry, Jeff Budlong, but the pictures I discovered in a manila envelope in your drawer were too tempting.

Journal sports editor Terry Hersom takes notes at the NAIA Volleyball National Championship at the Tyson Events Center in Sioux City on Dec. 3. Hersom will retire on Dec. 31, ending a 38-year career as head of the Journal's sports department.