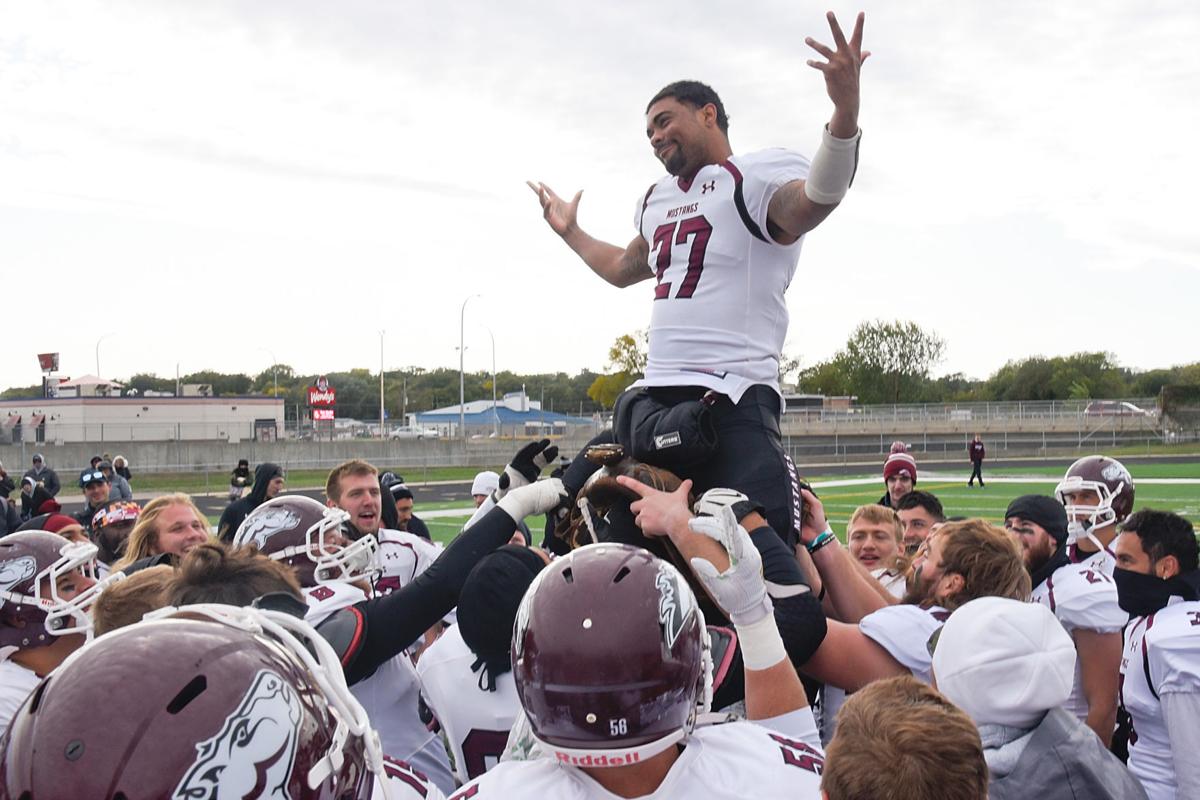 Morningside's Anthony Sims sits on the saddle after a 2019 victory against Briar Cliff at Memorial Field in Sioux City. 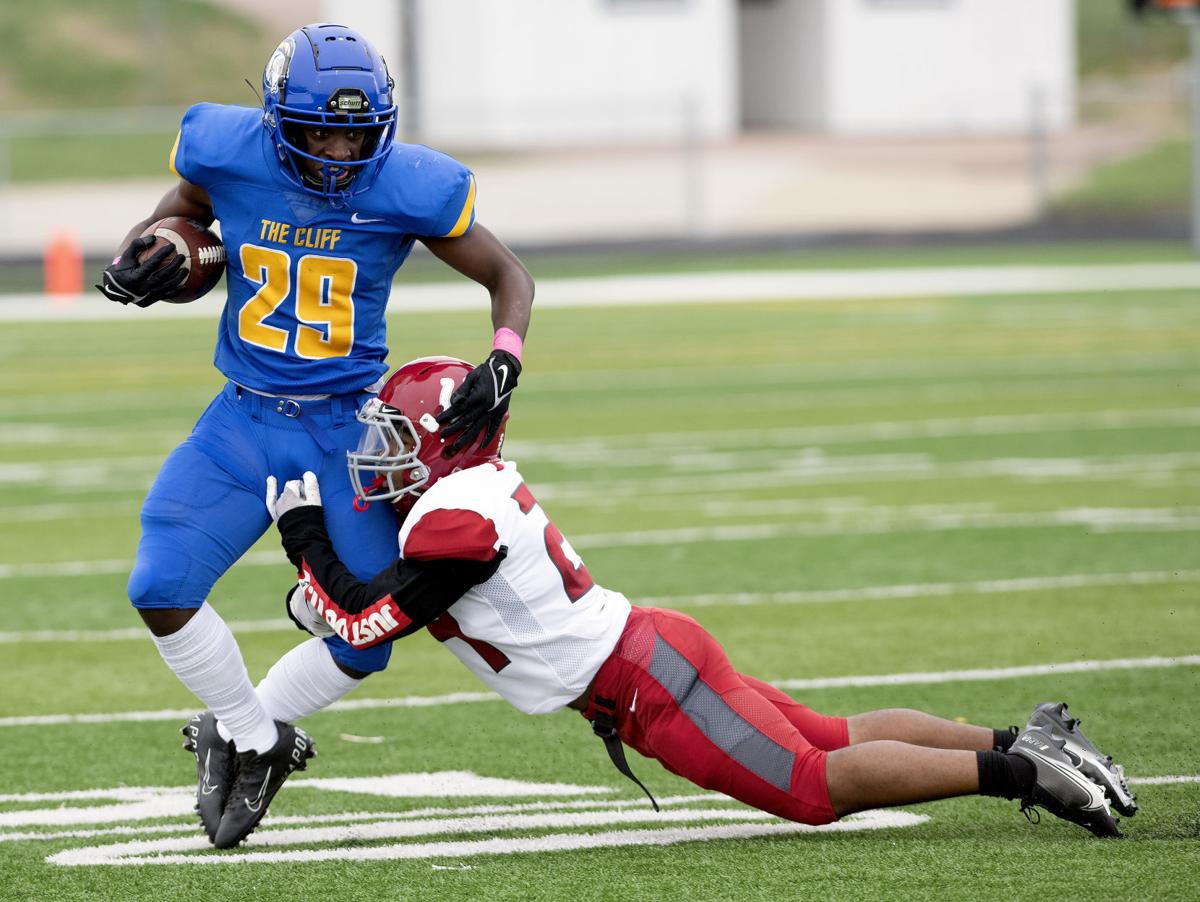 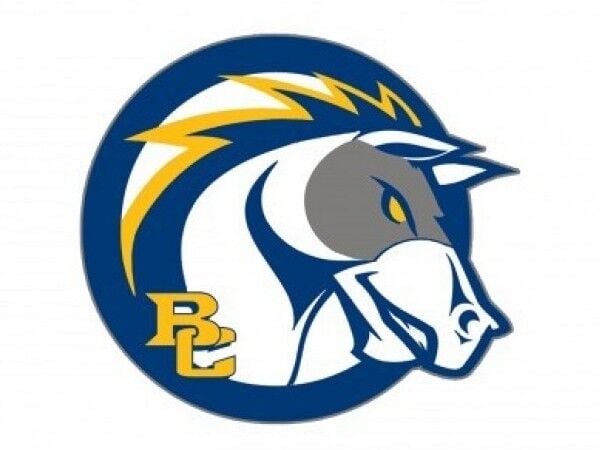 SIOUX CITY — For the 19th time, the Morningside University and Briar Cliff University football teams will meet in a rivalry game.

This time, it’s at Memorial Field, as the third-ranked Mustangs and Chargers meet in a 1 p.m. battle.

The Mustangs have won all 18 meetings, and coach Steve Ryan remembered when the rivalry started nearly three decades ago.

The two schools decided to play for a saddle — and call the rivalry “Battle for the saddle” — which is fitting since both mascots have equine backgrounds.

“I don’t know how it affects Briar Cliff, but it gets our guys fired up,” Ryan said. “We show the saddle around a little bit. In many ways, it’s a young rivalry, but it’s for sure a good one.”

Briar Cliff coach Shane LaDage said that there was a buzz around practice and campus this week.

“We’ve had the mindset of, this is why you come to Briar Cliff,” LaDage said. “You want to play games like this. We’re in one of the top conferences in the country, and competing against some of the best teams. This will be a good measuring stick for us.”

Sims scored five of those TDs in the first 30 minutes of the game.

He also had 203 yards, and became the third Mustangs running back to score 50 rushing TDs in a career.

On Saturday, he might break the 3,000-yard mark for his career. He needs 61 yards to do just that.

Records have been broken often under Ryan’s tenure, and he said that it doesn’t get old.

“The old saying is that records are meant to be broken, and it’s special,” Ryan said. “His teammates were pulling for him and excited for him. He really did have an amazing game. It’s a true credit to the game and the way that he prepares for the game. I’ve just been blessed to play with some outstanding players. I think that’s part of what helps the running backs is good quarterbacks, good wide receivers and good offensive linemen.”

Ryan Cole and Michael Minor have also surpassed the century mark in rushing yards this season.

Eleven different men have had at least one carry.

“I do think we are running the ball very well right now and a lot of that has to do with how well the offensive line is playing,” Ryan said. “I think at the end of 2019 and in the spring of the 2020 season, our offensive line played extremely well and played at a high level. I don’t know if we’re at that point yet, but we don’t need to be. We’ve only played five games so far.”

The Chargers are well aware how well they have to play in order to give the Mustangs a challenge.

Coach Shane LaDage said that has been discussed multiple times this week leading up to the rivalry game at home.

He may not have told his fairly-young squad that BCU has never beaten Morningside in 18 tries, but there’s some excitement on-campus among players, coaches and students.

“We have to play pretty dang perfect, and there’s nothing wrong with expecting that,” LaDage said. “Our margin of error has to be razor thin. We have to take advantage of every opportunity. We can’t let running backs bounce off tackles. We have to cover up the receivers because they’re very explosive.”

LaDage also said that if the Chargers’ defense makes Dolincheck uncomfortable, the BCU defense may keep its team in the game.

Mount Marty did that during the first half when the Lancers came to town earlier this season.

The Lancers forced Dolincheck to throw a pair of interceptions during the first half, but the Lancers’ offense really didn’t do much with those takeaways.

Of course, the Chargers’ ‘D’ hopes to wreak some havoc.

Linebackers Brett Tinker and Asi Tupua have led the BCU defense so far. Tinker leads the Chargers with 40 tackles, a sack and a fumble recovery.

Tupua has 37 tackles and three sacks.

LaDage hopes the offense can take advantage of those chances, as well as keeping their group on the field as long as possible. Ball control is a key that LaDage knows is a crucial one.

The rushing game will help keep the Chargers’ offense on the field. Asante Anglin leads the BCU rushing attack with 208 yards.

If the offense does need to pass the football, quarterback Luke Davies will turn to Aaron Okoro, who leads BCU’s receiving corps with 313 yards on 18 catches.

Kobe Johnson isn’t too far behind with 303 yards on 15 catches.

“The offense needs to stay on the field and sustain some drives,” LaDage said.

No. 3 Morningside at Briar Cliff

Morningside's Anthony Sims sits on the saddle after a 2019 victory against Briar Cliff at Memorial Field in Sioux City.