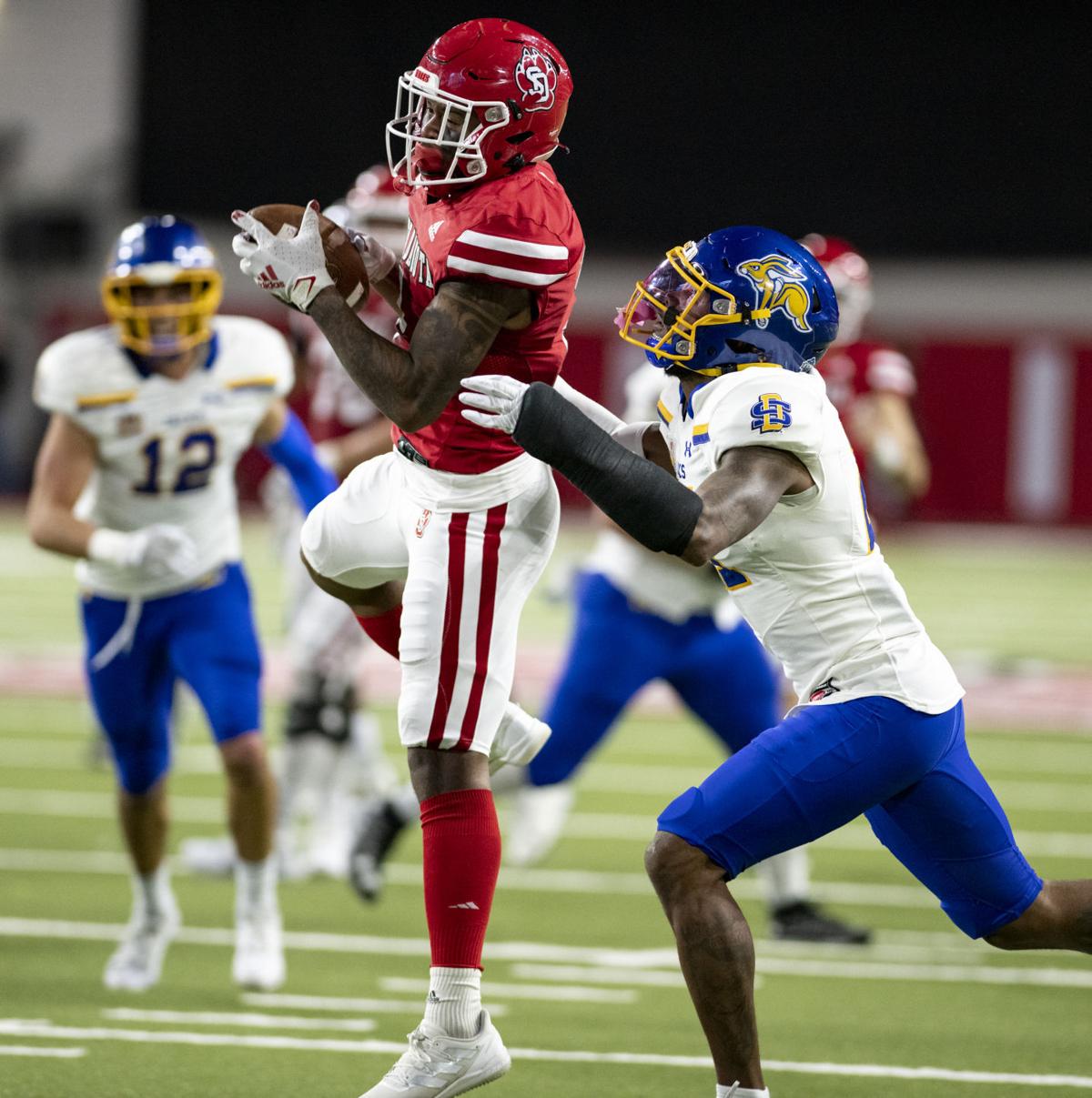 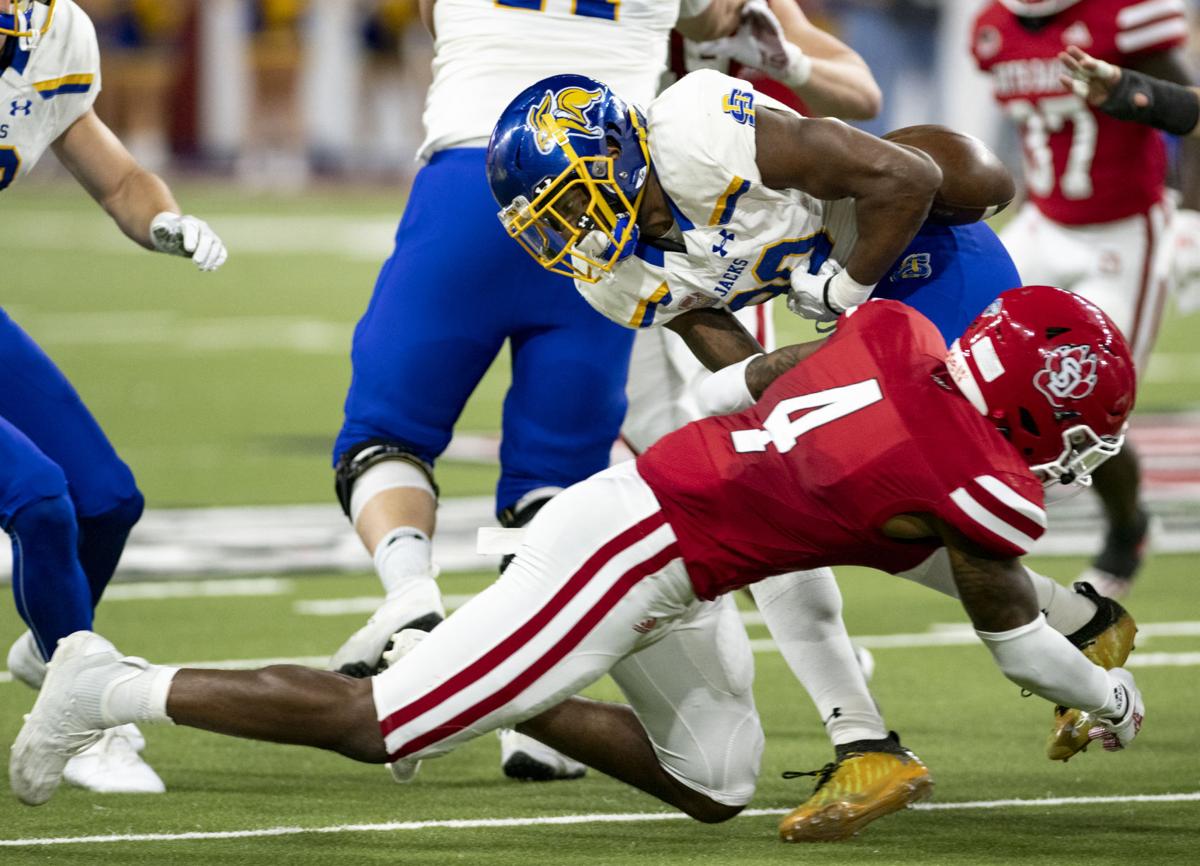 SDSU's Pierre Strong, Jr. is brought down by USD's Elijah Reed causing him to fumble the ball during University of South Dakota vs South Dakota State University football action in Vermillion, S.D. on Saturday.

VERMILLION, S.D. — In the long and storied history of the South Dakota-South Dakota State football rivalry, there may never have been an ending like the one that took place here Saturday.

USD scored on a 57-yard “Hail Mary” pass on the final play of the game to stun South Dakota State 23-20 in front of a frenzied crowd of 9,068 at the DakotaDome.

Jeremiah Webb somehow hauled in the pass from Carson Camp that was tipped by two SDSU defenders.

The defensive players actually deflected the ball short of the end zone before it settled in Webb’s hands.

“It was pretty slow motion,” said Webb, a heretofore seldom used receiver who had a breakthrough performance. “The ball went up, bounced off a couple defenders hands and I saw it the whole way and was just hoping to grab it off the tip.”

Camp first had to elude pressure and heave the ball as far as he could. It truly was the miracle of all miracles for a 17th-ranked Coyote team that more than likely clinched an FCS playoff berth and will play for a share of the Missouri Valley Football Conference championship next week.

“We practice that all the time,” cracked Camp. “We talked on the sideline about going ‘Hail Mary’, try to get it to the end zone, Carson stay alive. That’s all we had to do, Heck of a play by Jeremiah. I saw the ball bouncing around, I didn’t see who caught it, but it worked well.”

The game-winning play — which almost instantly appeared on ESPN and other national outlets — was certainly one to remember.

But how the game arrived at that point was also a major topic of discussion.

South Dakota State scored with 6:10 left in the game to take a 20-17 lead. The Coyotes were then backed up to their own 12-yard line after an illegal block on the ensuing kickoff return.

They moved to the 27 of SDSU and facing fourth-and-inches, Travis Theis was stopped dead in his tracks.

That gave the Jacks possession with 1:59 left and USD was forced to take all three of its timeouts in the next 20 seconds.

So, it looked as though South Dakota State could just run out the clock. It tried to, getting it all the way down to 8 seconds with fourth-and-1 at the USD 43.

At first, the Jacks lined up in punt formation, but then decided to get the offense back on the field.

Quarterback Chris Oladokun took the snap from the shotgun formation, held it for a couple of seconds and then threw it into the end zone, hoping to kill off the rest of the time.

However, the play went to review and it was determined that there was still one second remaining.

“As crazy as that play was, I really thought our kids deserved to win that football game,” USD coach Bob Nielson said. “They played hard, physical football. Obviously missing some opportunities to put points on the board kind of put us in a bad position at the end there.

“Our kids kept believing. We talk about this all the time and made an unbelievable play at the end.”

South Dakota, now 7-3 overall and 5-2 in the MVFC, beat its arch rivals for the second straight time after losing 10 in a row. The Coyotes close the regular season at North Dakota State (9-1, 5-1) next week.

No. 7 South Dakota State left the dome at 7-3 and 4-3, but also will more than likely make the post-season.

Jackrabbits’ coach John Stiegelmeier said his team practices the play they tried to run out the clock on regularly.

“It’s eight or nine seconds,” Stiegelmeier said. “I don’t know how the clock…..that’s the way it works for us. That’s how fickle the game of football is. One second and a whole different outcome.

Webb, who had only three catches for 32 yards coming into the game, corralled six for 153 yards.

“Right before the game we knew (Kody) Case was going to be out,” Webb said. “When your number is called, it’s time to step up. I just went out there with confidence and played South Dakota football.”

As thrilling as the finish was, USD’s defense also deserves a ton of credit. For most of the game, it held Pierre Strong — one of the top rushers in FCS — in check. Strong got a bulk of his game-high 103 yards on the 75-yard drive that put SDSU in front.

“We’re a good team that belongs in the playoffs, it’s as simple as that,” said linebacker Jack Cochrane, who had eight tackles and an interception. “We stayed the course, tried not to give up the big plays and tackle.”

South Dakota State increased its lead to 13-7 on a 37-yard field goal at the end of the first possession of the second half.

The Coyotes answered with an 8-play, 75-yard march capped by a 13-yard Thomas touchdown run.

USD kicker Mason Lorber missed a pair of field goals, one from 40 yards and the other from 36.

The first missed field goal came after an interception by Jack Cochrane, but the Coyotes cashed in on a second pick, this one by linebacker Jake Matthew.

An unsportsmanlike conduct penalty on SDSU on the first play after Matthew’s interception moved the ball to the Jacks 32-yard line. The Coyotes converted a fourth-down play on a blast up the middle by Nate Thomas and scored on a 13-yard pass from Camp to Caleb Vander Esch.

Camp eluded pressure, rolled to his right and zipped a perfect throw to Vander Esch in the corner of the end zone with 1:16 left in the half.

Camp left the game for one series after being injured on the first play of the game. He was hit while throwing and the pass was intercepted by DeShawn Gales.

SDSU, however, had to settle for a 37-yard field goal.

“We have a big game that has a tremendous amount of meaning this week."

SDSU's Pierre Strong, Jr. is brought down by USD's Elijah Reed causing him to fumble the ball during University of South Dakota vs South Dakota State University football action in Vermillion, S.D. on Saturday.