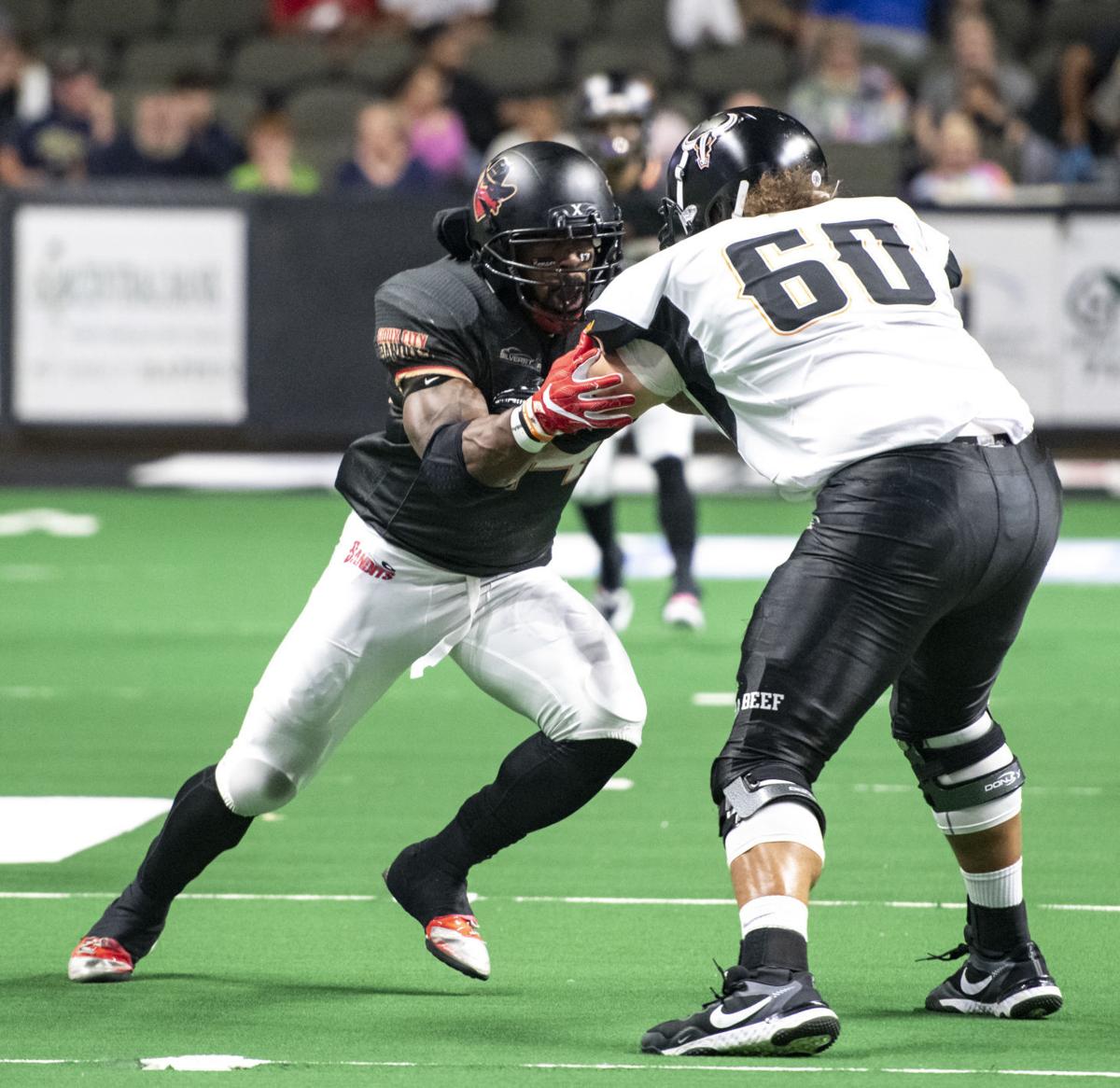 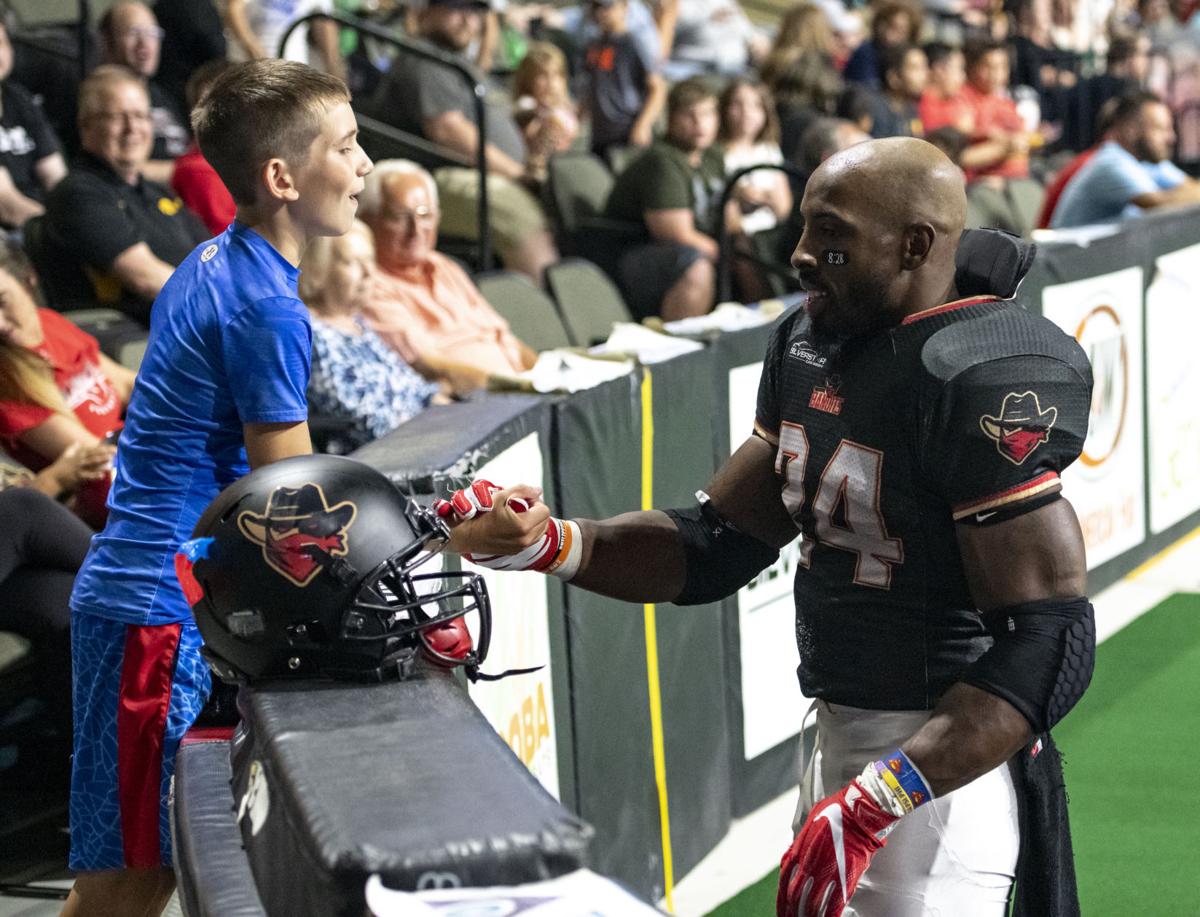 The Superman cape is usually what gives him away.

Knight, a former star linebacker for the Sioux Falls Storm of the Indoor Football League, came out of retirement last month to sign a deal with the Sioux City Bandits.

In his first competitive football game in over three years, Knight led the Bandits with nine tackles, 2.5 tackles for loss, and one sack in the team's thrilling seven-point regular-season finale win last Saturday over Omaha.

It was quite a way for Knight to introduce himself to the home fans at Tyson Events Center.

Knight was a legendary figure in his years in Sioux Falls. During his tenure, the Storm won five United Bowl Championships, and Knight was named an All-IFL player five different times. He also won the league’s defensive player of the year award in 2013 and 2014.

After stepping away, Knight spent the next three years working in Sioux Falls and providing performance training for athletes on the side, which has kept him in top football shape.

So when he got the call from the Bandits a few weeks ago, he knew he was ready to return. And he brought his trusty Superman cape with him.

In high school, Knight earned the nickname “Superman,” thanks to his ability to be a difference maker on both sides of the ball, as a running back and a linebacker. The name stuck through college at Mississippi Valley State, where he was a two-time All-Southwestern Athletic Conference (SWAC) selection, and the 2005 SWAC Defensive Player of the Year.

“From then on, even in college, I’ve been Superman,” Knight said. “It’s something that just kind of stuck. It’s a great thing because it pushes me, and challenges me to go out and do whatever my team needs. That is my thing, to go out and be that reliant force, and be that impact player for the team.”

Knight spent time at both linebacker and defensive end for the Bandits last weekend, and sacked Omaha quarterback Andrew Jackson in the end zone for a safety in the team’s 35-28 win over the Beef.

In addition to his football skills, Knight’s leadership ability is what made him an intriguing signing for the Bandits. With his IFL resume, and the CIF's playoff roster freeze fast approaching, it was a no-brainer of a signing for Erv Strohbeen, the Bandits coach.

“A guy that has won that much, plays that well, and keeps himself in that much shape, he played linebacker for us hard tonight, and got after it at the defensive end position,” Strohbeen said. “What can you say? Anytime you have a chance to boost your roster at the playoff time, that is what you do.”

When Knight stepped away from Sioux Falls on New Year's Eve 2017, he did so because he had put down roots, and didn't want to have to relocate to keep playing the game. But the desire to play never completely left him, and the offer from the Bandits was too good to pass up.

With Sioux City playing in the CIF postseason — and just two wins away from a league title — Knight has the opportunity to add to his championship trophy case.

Even more importantly to him, the next few weeks are a chance to go out on his own terms.

At 36 years old, he says that the remainder of this season will be his "last rodeo."

Superman is finally hanging up the cape for good.

“This year, I still have the itch, and the only way I am ever going to be done is if I get closure on my own, that I want, to walk away from the game,” Knight said. “This is the year, this is it. Whatever happens happens, but I walk away however I want to, and that is the most important thing.”

The Bandits will play at Omaha on July 9, in the Champions Indoor Football semifinal.

The Sioux City Bandits defeat the Omaha Beef 35-28 at the Tyson Events Center.

SIOUX CITY-- If this was the final home game of the season for the Sioux City Bandits, it was one heck of a way to go out.

West High School junior Holly Duax made history this season on the track, even if she didn’t quite realize it at the time.

SIOUX CITY — Through all the Sioux City Explorers' ups and downs, and hot streaks and slumps this year, one player has consistently produced a…

ATLANTA — The Milwaukee Bucks proved they were good enough to wrap up the Eastern Conference finals without their best player.

STORM LAKE-- The Alta-Aurelia softball teams won a pair of games on Saturday at the Storm Lake Tournament, as the Warriors took down Lawton-Br…