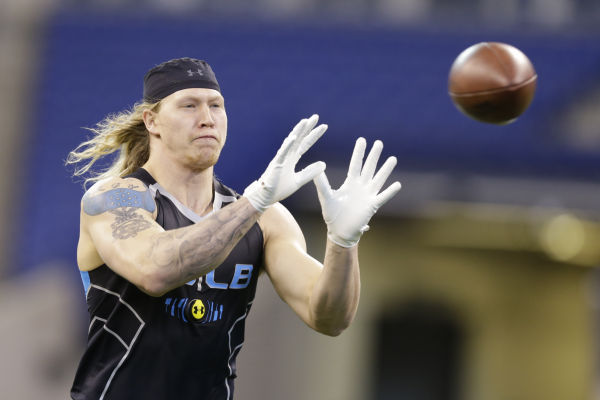 South Dakota linebacker Tyler Starr runs a drill at the NFL scouting combine in Indianapolis before the NFL draft. His professional football career begins Sunday as the Atlanta Falcons open the 2014-15 season. 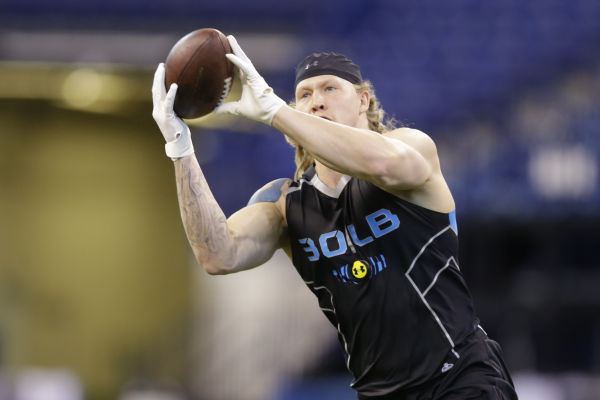 George-Little Rock High School and University of South Dakota graduate Tyler Starr is nearly a year removed from being selected by the Atlanta Falcons in the seventh round of the 2014 NFL Draft.

USD's 6-foot-5, 250-pound former All-America linebacker was on pins and needles a year ago, focusing on preparing for the draft. That meant passing a series of stringent physical tests in front of pro scouts, trying to prove that he was worthy of becoming an NFL player.

Then, after a long and anxious day, Atlanta took Starr with the 255th pick. He made the Falcons’ 53-man roster out of training camp – ensuring a $420,000 base salary – but was never on the team’s weekly 46-player active list for any regular season game last season.

“I was ready for my number to be called at any time,” Starr said. “All you can do is control the controllable and be prepared when your time is called. I had to do what I could, take in what was going on during the game and help everybody else out”

He still practiced during the week and spent game days on the sidelines, although not in uniform. The fact that the Falcons kept him around and didn’t assign him to the practice squad had to have meant something.

“You don’t really know what’s going on, but I felt like I had to have been some sort of valuable asset to the team to keep me around,” Starr said. “I have to go out there and do what I can to show the new coaches that they kept me around for a reason and that I can perform in this league and that I’m not only good enough to be here, but good enough to make an impact.”

Therefore, Starr will once again be in audition mode when OTA (Organized Team Activities) workouts start at the end of the month.

“I had a brief introduction (to Quinn) but workouts start pretty soon, so we’ll really get the feel for each other,” said the former Missouri Valley Football Conference defensive player of the year. “It doesn’t matter who’s coaching me, I’ll do what he asks me and perform at the optimum level. This is the top level of football, something I enjoy doing and hope to do for many years to come. I just have to continue to strive to be the best I can be at it.”

Tyler and his fiancée, Megan Wheeler, were famously featured on an episode of HBO’s “Hard Knocks” when Starr got a call from his coach, informing him he made the team.

“It was fun, but different having to adapt to being in the spotlight more often,” Starr said. “It was good for me and good for my brand and hopefully the powers to be will stick with me and help me grow.”

Starr and Wheeler, by the way, plan to marry on July 11. Tyler has a young son, Hunter, who was a fixture at USD games, donning his Coyote jersey. No doubt, he now has plenty of Atlanta Falcons garb.

Heading into his second professional season, Starr feels a little bit more at ease, but realizes there is still plenty for him to prove.

“Now I’m getting a chance for a fresh start and I actually understand the process after kind of getting thrown into the mix (last year),” he said. “You have to be a real talented individual to not only been in the loop of things but hit the ground running. I’m looking forward to being able to grab the bull by the horns.

“I’m going to be out there whether it’s in Atlanta or somewhere else. My mind is set on playing football this year and not just the pre-season. I’m going to make an impact in the league. I didn’t get this far not to.”

Three games into his first National Football League season, rookie linebacker Tyler Starr is still waiting to pull on that No. 54 jersey the A…

South Dakota linebacker Tyler Starr runs a drill at the NFL scouting combine in Indianapolis before the NFL draft. His professional football career begins Sunday as the Atlanta Falcons open the 2014-15 season.