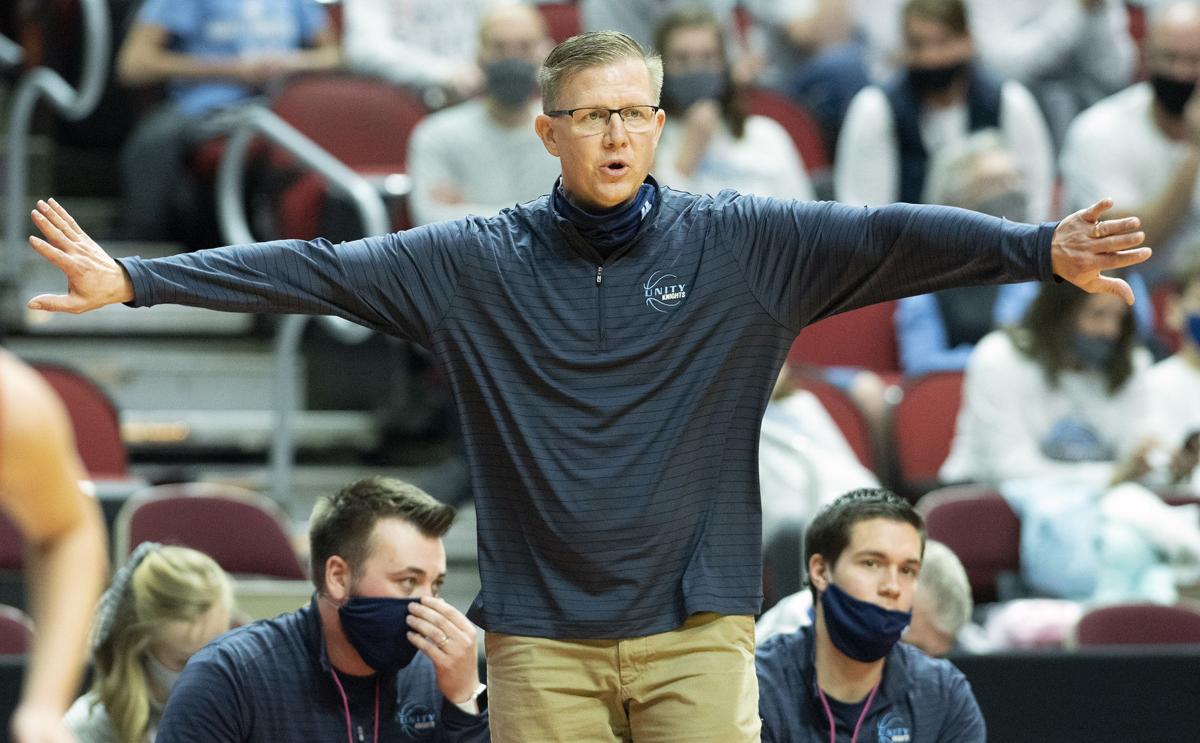 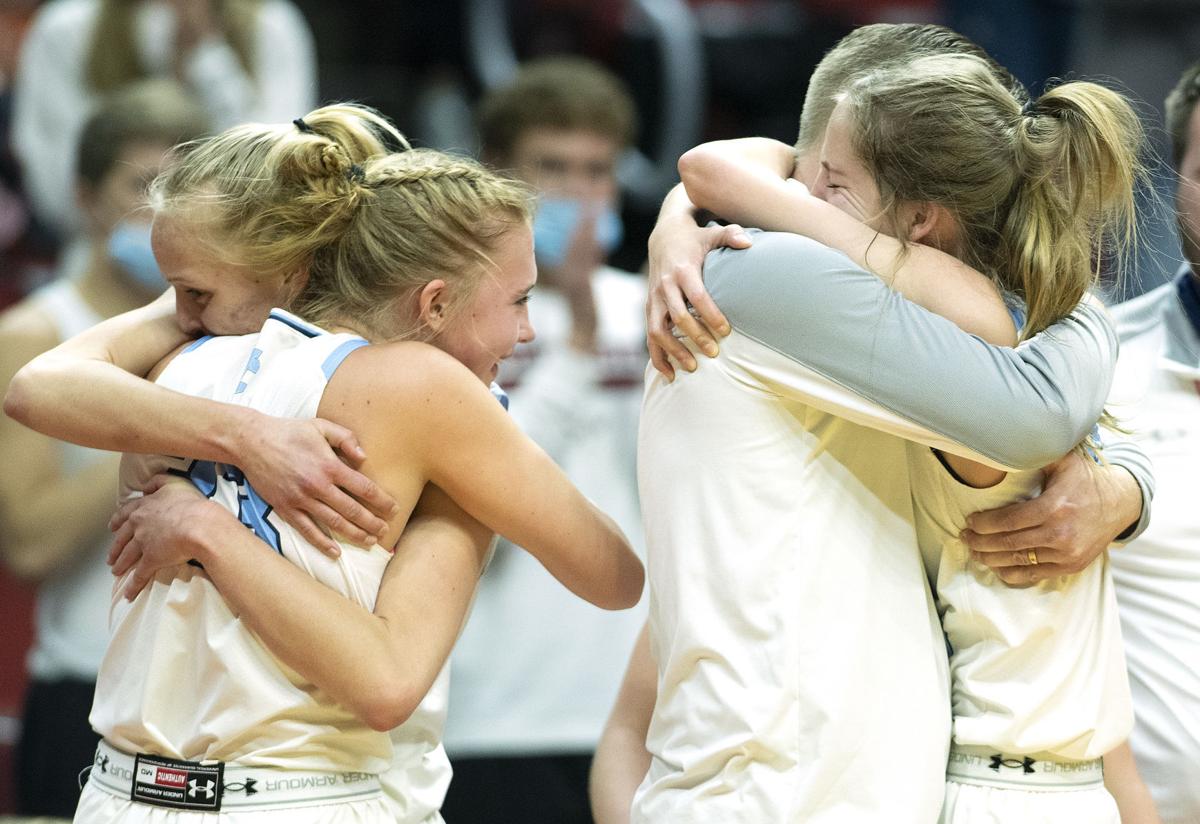 Unity Christian's Tyra Schuiteman hugs her father, head coach Jay Schuiteman as they and players Jenna Bouma and Gracie Schoonhoven celebrate in the final minute of their win over West Lyon in the Class 3A championship game on Saturday at the Wells Fargo Arena in Des Moines.

In fact, the more crowded the school's trophy case gets, the more they each seem to mean.

In 2015, Schuiteman’s Knights’ squad went undefeated to win the first state title in program history, one year after losing in the championship game to MOC-Floyd Valley.

Surely, it doesn’t get more special than that.

In 2016, the Knights won their second consecutive state championship, clinching the title with a tense one-point revenge win over Western Christian, who dealt the Knights' their only loss earlier in the season.

Surely, that can't be topped.

This year, led by standout sisters Gracie and Janie Schoonhoven, along with Schuiteman’s sophomore daughter, Tyra, the Knights beat West Lyon 48-31 in the state championship game to clinch the team’s third state title.

Watching your daughter win a championship, and having your program's all-time leading scorer (Janie Schoonhoven) be named All-Tournament Team Captain as she raises a state title trophy with her younger sister?

That is about as special as it gets, and that win is a reason Schuiteman has been named the Journal’s girls basketball Coach of the Year.

On Wednesday, the coach reminisced about last month’s win over West Lyon. While watching the tape of the game at home with his daughter, Jay Schuiteman said he noticed a smirk on his daughter’s face when she stepped to the free throw line.

“I paused it and I said ‘What were you thinking there?'”, Schuiteman said. “She said ‘Dad, I was thinking back to every time on the driveway, I step to the free throw line, what would you tell me?’ I said, ‘One on one for a state championship.’ She goes, ‘I stepped up there, and I got a little smile on my face, because I’ve done this 1000 times before.”

As the clock ticked down, and it became obvious that the Knights would come out with a win at Wells Fargo Arena, the Schuiteman’s hugged each other tight near the bench.

To his players, Schuiteman is more than just a coach.

“(It’s) the way he is able to communicate and build relationships with us,” Tyra Schuiteman said. “He is my father, but I know lots of the other girls, he is their father too during basketball season. He is so good at talking to you and figuring out what you need. He doesn’t yell, and he knows just really what we are feeling.”

As good as he is at building relationships and cultivating a family atmosphere in his program, Schuiteman is arguably even better at the X’s and O’s part of the game. On offense, the Knights’ finished first in Class 3A in total points and field goal percentage, while placing third in the state in assists and defensive rebounds.

The Knights’ defense dominated the competition in the state tournament, winning every game by at least 16 points, and holding West Lyon to just 3-of-26 shooting in the second half of the title game, a contest where they also held star Wildcats' senior Brooklyn Meyer to zero points after halftime.

Schuiteman used a defense that Bishop Heelan fans would be familiar with.

“We kind of stole (the defense) from Heelan last year, who won it,” Schuiteman said. “I’ve talked to (former Crusaders coach Darron) Koolstra a lot. Coaching, it’s never an original idea. Basically, we stole it from him and early in the season it didn’t work very good. Then, for some reason it clicked late.”

Koolstra, who retired as Bishop Heelan's head coach in August after 10 years of leading the program, said that the reason the defense has been so successful is because it is so unique.

With a new lock-down defense, three titles in hand, and three of his five starters set to return for next season, coach Schuiteman and his Unity Christian squad have plenty of reason for optimism.

There might be more championships in his future, and Schuiteman knows that that he will never get tired of that.

"They keep getting sweeter," Schuiteman said. "I'm kind of excited for what is to come yet."

Janie Schoonhoven didn’t back down from a challenge during her senior basketball season.

Iowa State's Ashley Joens earned a prestigious honor on Sunday, as the Cyclones' junior was named the winner of the 2021 Cheryl Miller Award, …

North Carolina didn't have to look far to find the successor to Hall of Fame coach Roy Williams or someone with a strong connection to the storied men's basketball program.

SIOUX CITY — The Sioux City East soccer team scored its first win of the year on Monday against Sergeant Bluff-Luton, as the Black Raiders bea…

Is Aaron Rodgers’ future in ‘Jeopardy’? Packers quarterback says he 'would love to’ be game show’s full-time host

Unity Christian's Tyra Schuiteman hugs her father, head coach Jay Schuiteman as they and players Jenna Bouma and Gracie Schoonhoven celebrate in the final minute of their win over West Lyon in the Class 3A championship game on Saturday at the Wells Fargo Arena in Des Moines. 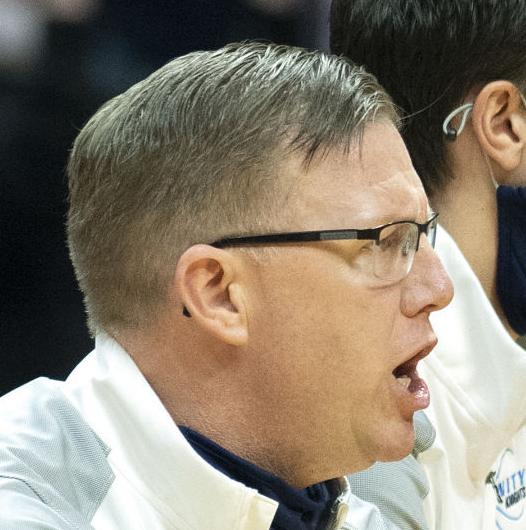