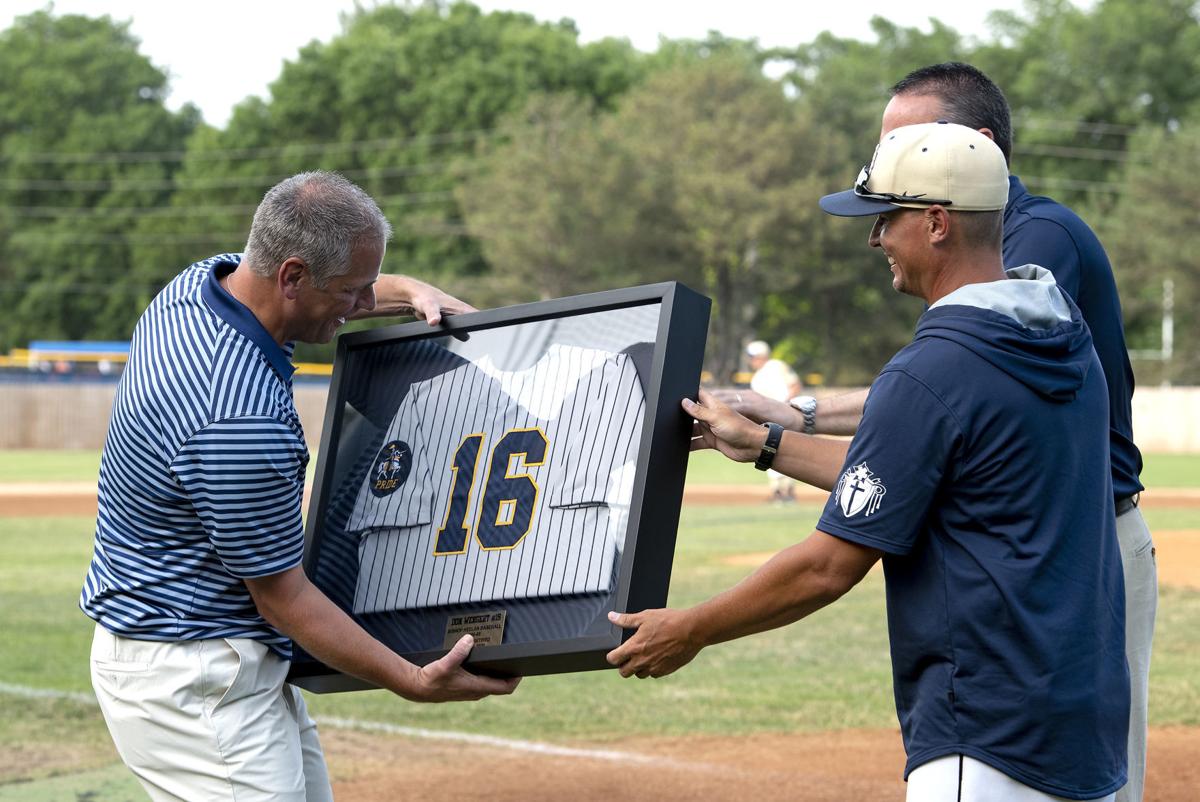 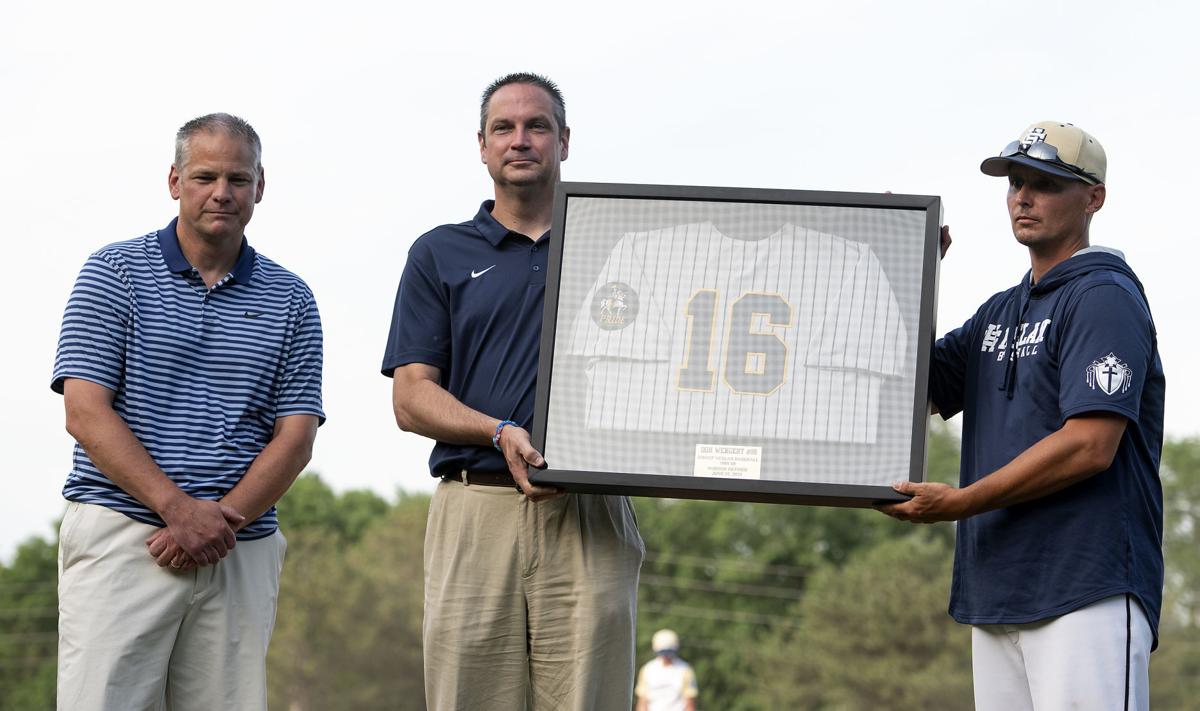 Wengert was in full awe during and after a ceremony Thursday that involved his No. 16 jersey being retired by the Crusaders.

It’s the first time that the Heelan baseball program has retired a baseball number.

Wengert couldn’t hide the excitement he had knowing he’s the first in program history to bestow the honor.

“It’s an incredible feeling,” Wengert said. “It’s an honor just to be here with family and friends tonight for this event. It’s really a family award. This is where baseball really started for me in 1987 with (coach) Joe Shanks and our team. It brings back a lot of memories.”

“There’s moments like that that you know will be so memorable,” Osborne said. “I texted him (Friday morning) saying that. It made it especially neat seeing how touched he was. For a guy who has accomplished all that he has in the game of baseball to have his family there … it meant a lot to him, and I could tell that. That’s something I’ll never forget.”

Wengert was a member of that 1987 squad that won a program-record 42 games. He was named second-team All-State in 1988 and was selected to play in the Iowa High School Baseball Coaches All-Star Series as a senior. In June of his senior season, he was selected in the MLB Draft by the Cincinnati Reds, but went to Iowa State to play baseball.

He later was drafted by the Oakland Athletics, which began a 12-year professional baseball career including six seasons in the major leagues.

“Heelan did a lot to me, and it did a lot to my family,” Wengert said. “... I think Heelan taught me hard work. We worked hard. We competed with all these top programs in the state. We had a lot of discipline at Heelan, and it was what I needed. I owe a lot to Heelan, because this is where baseball started.”

Wengert lives in Des Moines now with his family while working for Pfizer, and every year that the Crusaders make it to the state baseball tournament, Wengert makes the effort to go watch his alma mater play and if he has time, he’ll go out to eat with them.

The former Crusaders standout sees the same kind of similarities between the program then and now.

“I think right now, they’re very competitive,” Wengert said. “There are some great players that have been able to go Division I, which is an incredible honor. That’s not easy to do. So, when we were in high school, we had a couple good teams, but we were never able to go to the state tournament. I think now they have more success than then.”

Heelan's current team, by the way, has a 6-3 record, and its next conference doubleheader is 4 p.m. Tuesday at home against Council Bluffs Jefferson.

Wengert’s biggest goal in high school wasn’t to play in the big leagues, but just to play at the collegiate level.

After playing for Heelan, Wengert went to Ames to play for the Iowa State baseball team. With the Cyclones, Wengert was a two time All-Big 8 Conference selection and holds the Iowa State record for career wins (22), innings pitched (291 1/3), and games started.

“The longer we get, the fewer realize that Iowa State did have a baseball program,” Wengert said with a laugh. “We were competitive at Iowa State … and ISU was very good to me.”

Once he was drafted by the A’s in 1992, he grew through the minor league system, but his a-ha moment, according to Wengert, didn’t come until the 1994 Arizona Fall League.

The Arizona Fall League gives prospects a chance to play some more games after the regular season is over, and Wengert accepted the invitation to play.

Wengert pitched 19 scoreless innings out of the bullpen, and that’s when he realized that there was a realistic shot to make the big show.

“It was a two-month season and I was facing some of the top prospects,” Wengert said. “I wasn’t giving up any runs.”

With all those accomplishments under Wengert’s belt, Heelan baseball coach Andy Osborne knew that if there was going to be a high school baseball season, Wengert’s No. 16 needed to be the first to be retired.

In the winter, Osborne went to Heelan principal and former baseball coach Christian Bork to float the idea of having a jersey retirement ceremony in the summer. Osborne thought it was something that needed to be done, even though Heelan does not have an athletics Hall of Fame.

Osborne didn’t want to step on any toes, but the Heelan administration was fully on-board.

“I wanted to get this done,” Osborne said. “I definitely think Don is at the top of the list.”

Osborne called Wengert in the spring to let him know that the No. 16 would never be worn after the 2020 season — senior Jared Sitzmann wears it this year — and there would be a ceremony.

“I was honored to be able to do that,” Osborne said. “Don was legitimately honored. … It’s probably overdue, and it’s probably something that should have happened sooner.”

Osborne, the 2019 Journal Coach of the Year in baseball, believes that this could be a groundbreaking tradition at Heelan. Osborne would like to retire another number soon (he wouldn’t disclose who) but he’d like to start a Heelan baseball Hall of Fame.

“I think we can move forward with a yearly thing, but I’m not sure what that will look like yet,” Osborne said. “It might be a banner somewhere else or a ceremony honoring guys throughout the summer. I think that’s something we as a school can do a better job of.That’s something that has been on the back burner for Heelan athletics.”

To watch a video of the ceremony and Wengert's reaction, go to siouxcityjournal.com.

"I've been doing this for the last 14 years," Sioux City East athletic director B.J. Koch said. "This year it's been a lot more of a challenge."

Kingsley-Pierson began the season 6-0 overall and 5-0 in the conference, while  Woodbury Central entered the week 6-2 overall and 4-0 in the WVC.