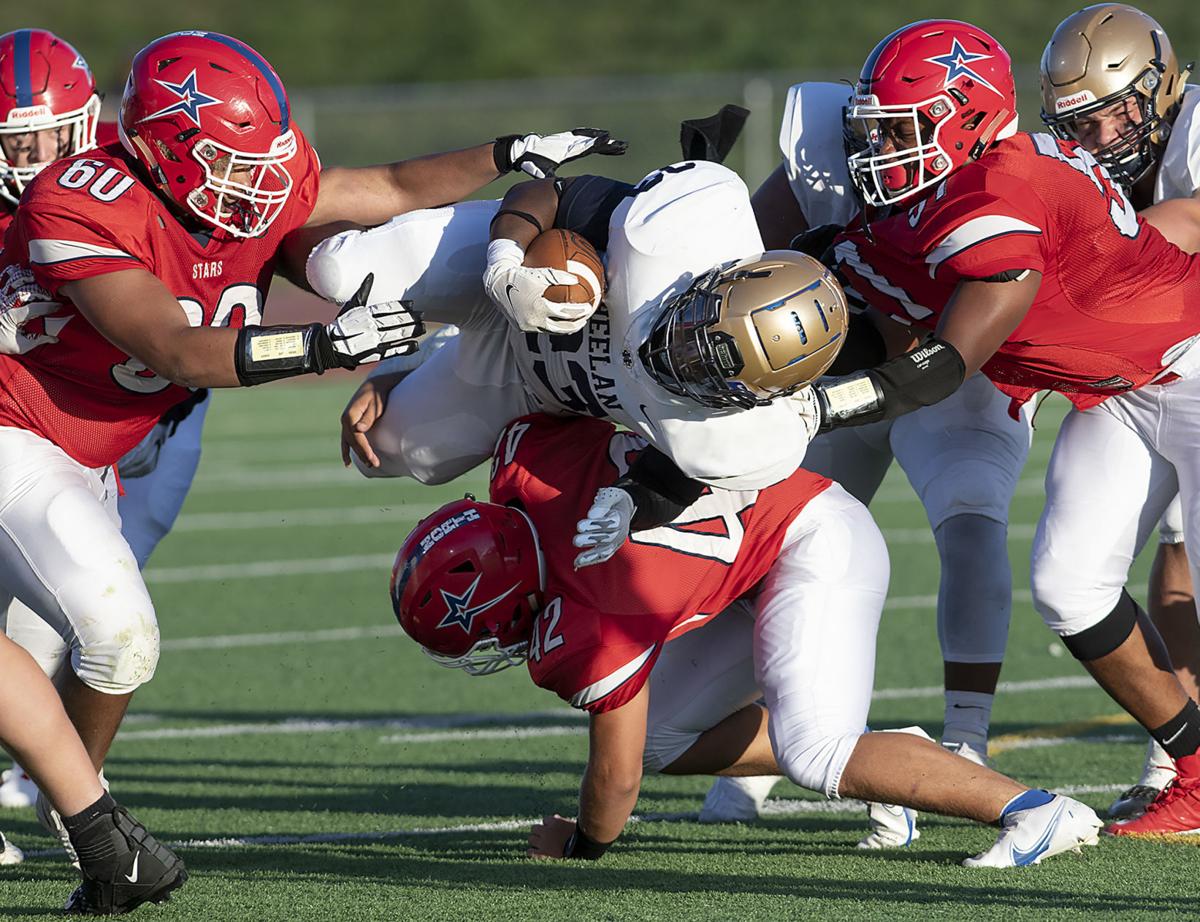 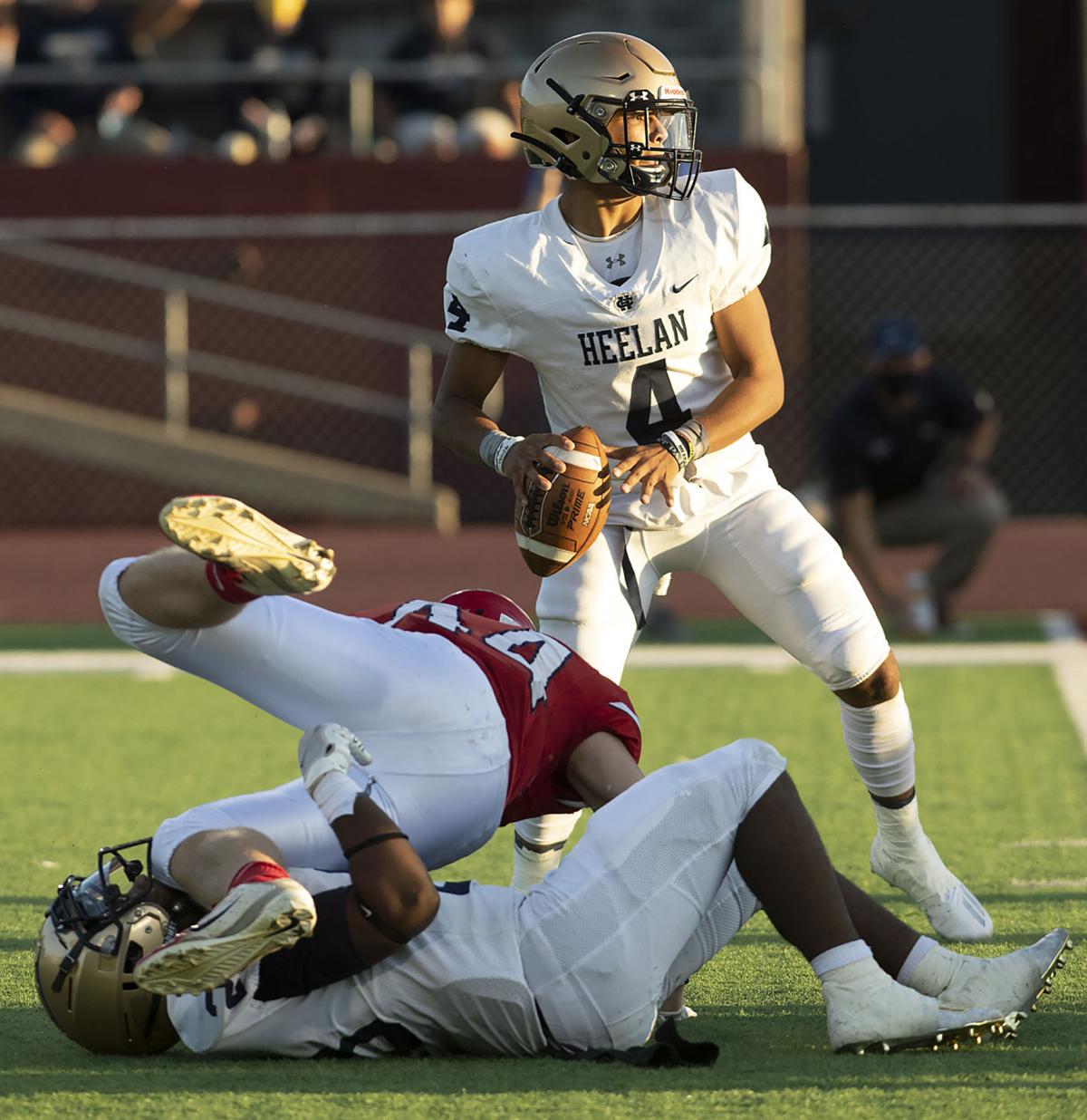 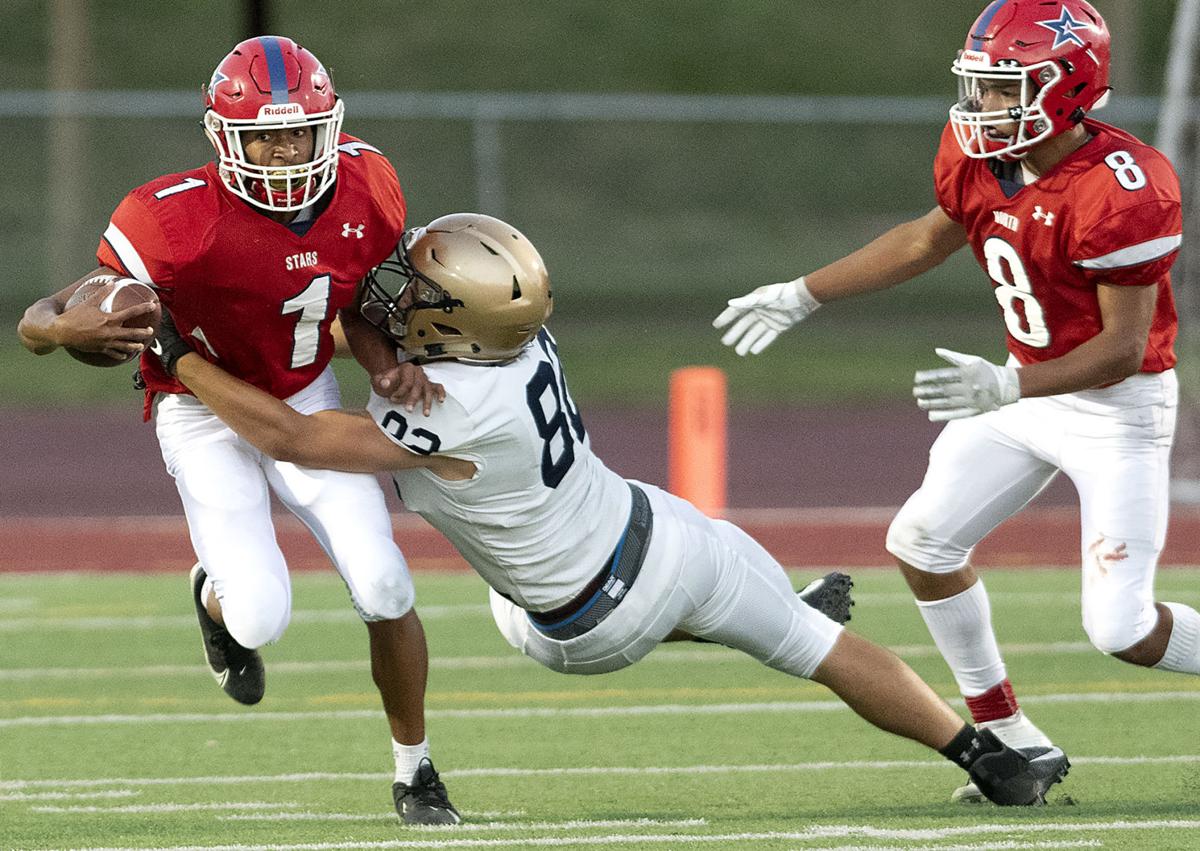 The Crusaders even kept adding to their lead.

The Crusaders held the Stars scoreless for 38 straight minutes in the game and that helped Heelan earn a 49-12 win to move to 1-1 on the season.

North got the scoring started in the first quarter as Brady Wavrunek scored from one yard out with 3 minutes, 51 seconds left in the first half to give the Stars an early 6-0 lead. Wavrunek’s touchdown ended a long drive for the Stars.

Their second drive was 10 plays and 71 yards long. Wavrunek helped for 27 of those yards and he had six carries in that drive.

The Crusaders held the Stars scoreless for the remainder of the half. 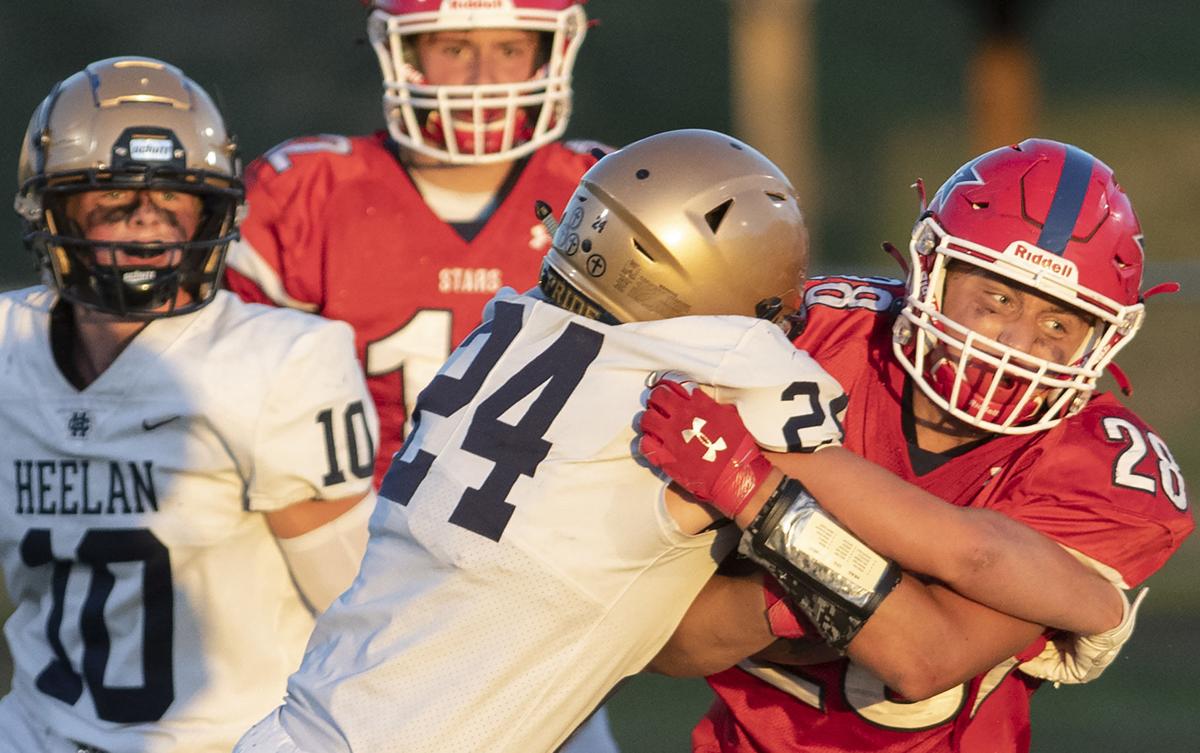 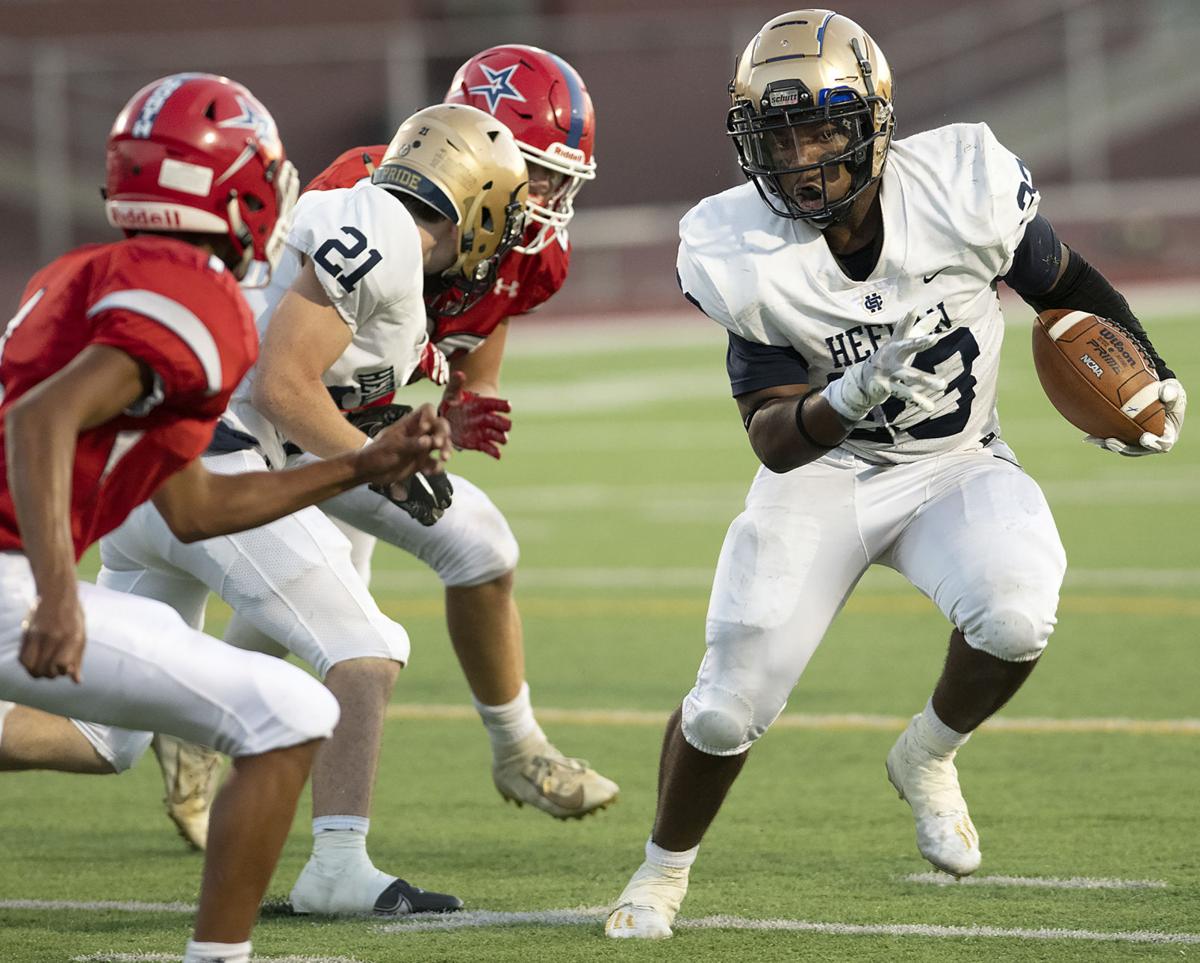 Heelan's Devionne West looks to get around a pair of North defenders during Sioux City North vs Bishop Heelan football action played Sept. 4, 2020, at Olsen Stadium in Sioux City, Iowa. 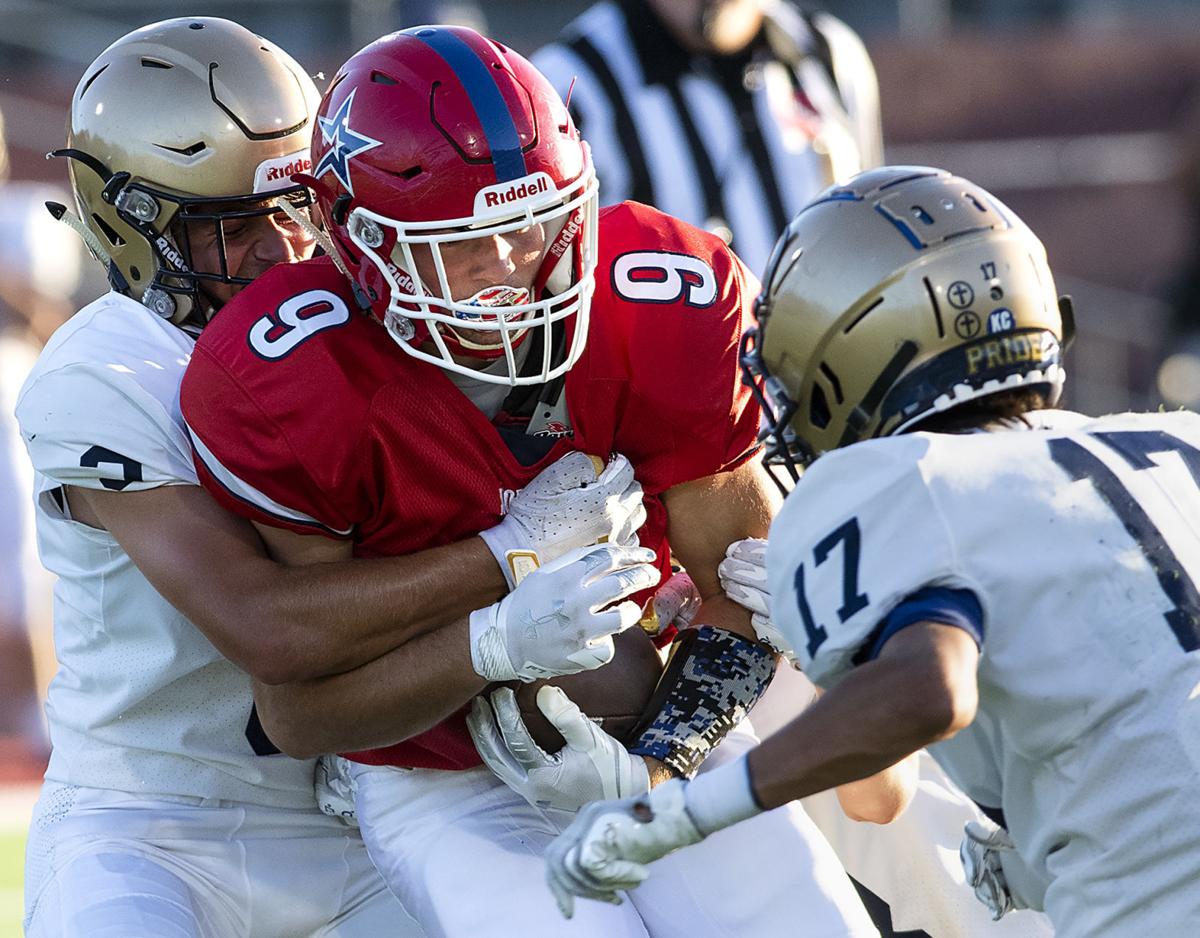 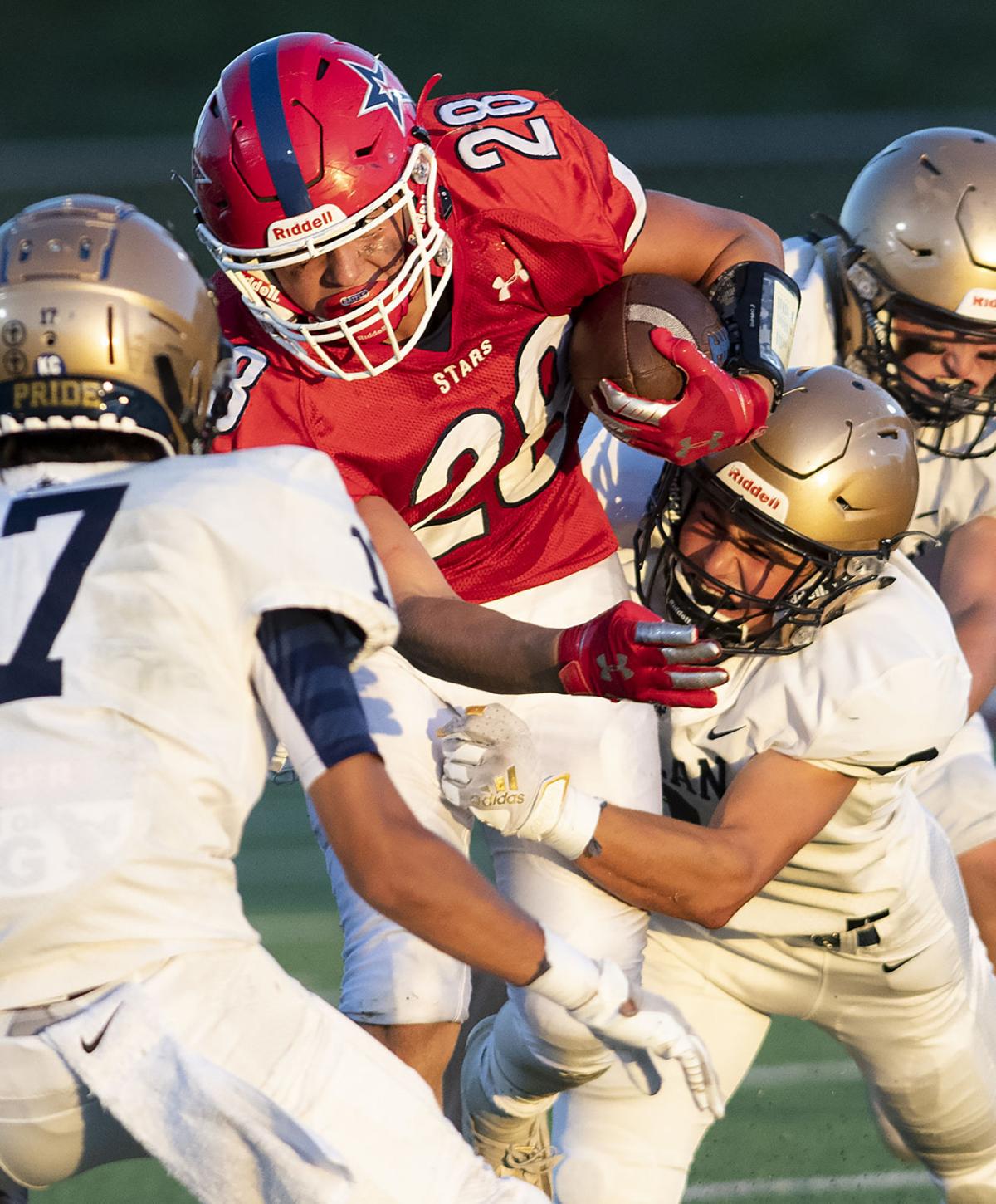 North's Brady Wavrunek tries to grind out an extra yard while being dragged down by Heelan's Brayden Pratt (3) and other defenders during Sioux City North vs Bishop Heelan football action played Sept. 4, 2020, at Olsen Stadium in Sioux City, Iowa. 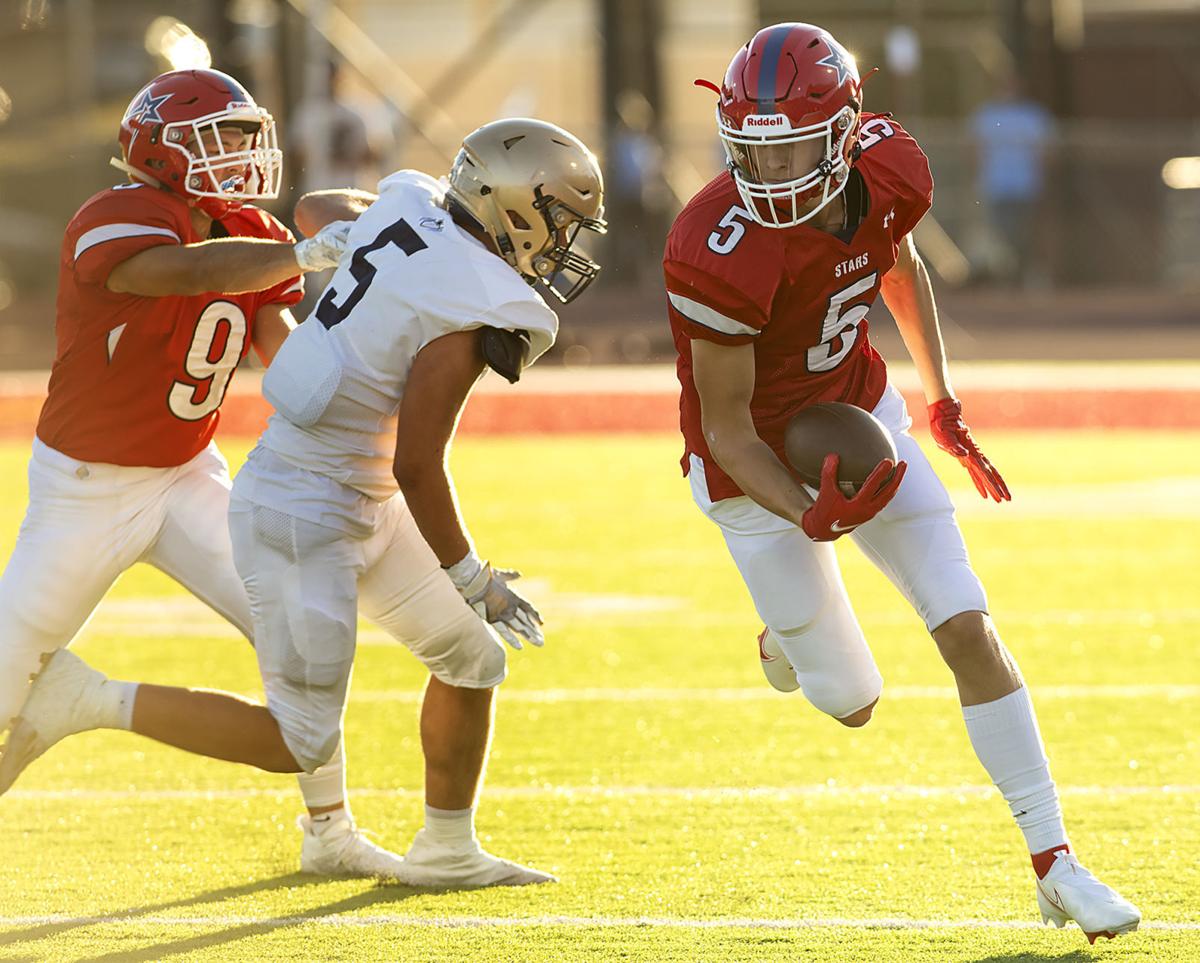 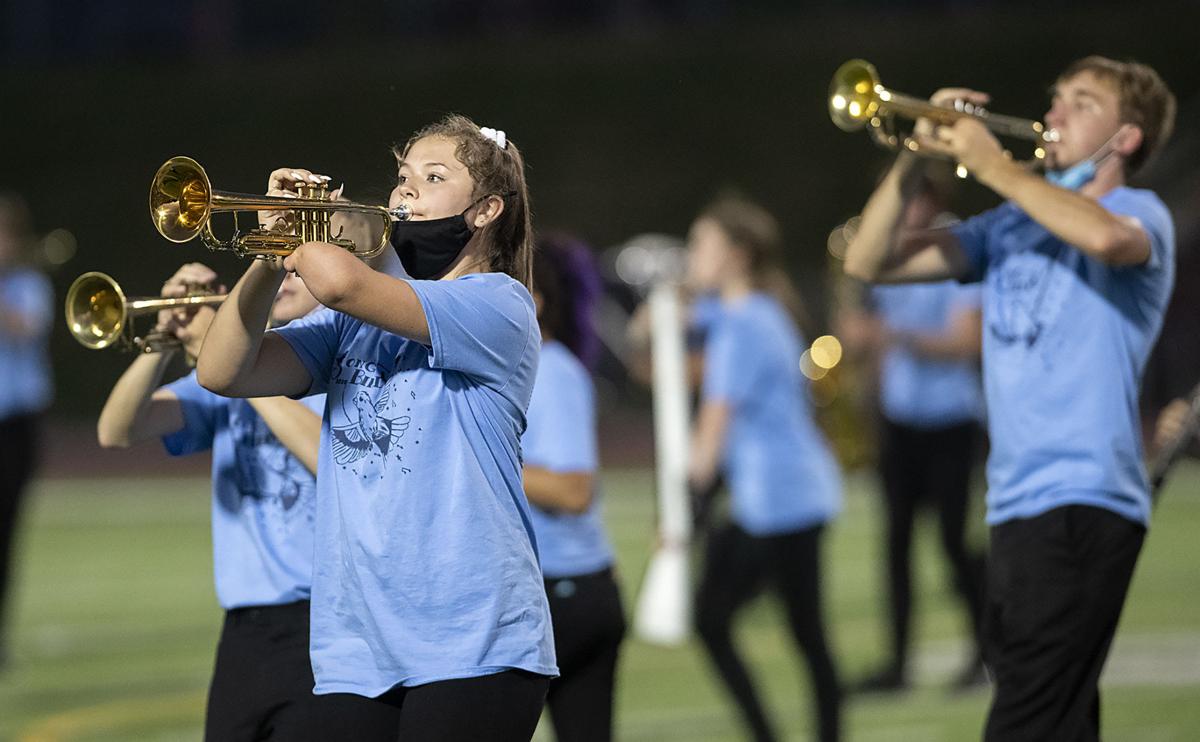 Heelan’s first scoring play came with 15 seconds left of the first half, as Nathan Favors had a quarterback keeper from the 4-yard-line to tie the game.

The Crusaders tried to go for two but failed on the pass attempt.

Heelan’s next two drives ended in the end zone. The Crusaders had a short field to work with on its third drive as Heelan senior Jacob Salmen snatched a Gavin Hauge pitch intended for Wavrunek and returned it to the North 6-yard line.

The Stars held the Crusaders out of the end zone on three plays, but the officiating crew flagged North on fourth down for running into kicker George Tsiobanos on a 22-yard field goal attempt.

Tsiobanos made the attempt, but the Crusaders wanted six points. On their next play from the 3-yard line, Heelan got the touchdown with a Devionne West 3-yard run with 10:21 left in the second quarter.

Then, Heelan ended North’s ensuing drive, as Sir Brandon Watts got his second interception of the season.

The Crusaders were faced with a 3rd-and-15 in the drive and needed a first down. The Stars’ defense applied that pressure to Favors, but at the Crusaders quarterback found West hanging back in case of emergency.

West caught the pass not far from the line of scrimmage, then West broke a couple tackles to make it to the first-down marker.

The drive continued. Six plays later, the North line seemed to tip the ball as Favors threw under pressure, but the officials penalized the Stars for 15 yards, which allowed the drive to keep going.

West ended that drive with his second 3-yard rushing TD of the night, as he beat the Stars to the far-side pylon at the front of the end zone.

Heelan opened up the second half with a long kickoff return by senior Brayden Pratt, who fielded the kickoff near Heelan’s 5-yard-line. Pratt returned the kick to North's 20.

Heelan scored on the first play from possession on that drive as Favors found junior tight end Michael Saulsbury for the score with 11:38 left in the third quarter.

Grant Hegarty picked off a pass off Hauge when the Stars were in the red zone to end the following Stars drive.

A couple plays later, Favors found a streaking Pratt down the North sideline. Pratt caught it around the Stars’ 45-yard-line and then the Crusaders senior won the footrace from there with 6:37 left in the third quarter.

Heelan’s final touchdown came with 4:19 left in the third quarter. West ran it in from the 2-yard line.

That drive -- which lasted four plays and 14 yards -- was set up by Brandon Watts’ second interception of the night.

Hauge’s last completion ended in a 65-yard passing touchdown to Austin McClain with 56 seconds remaining in the game.

OABCIG stays at No. 1 in second AP football poll

The Falcons garnered 10 of the 12 first-place votes after defeating Spirit Lake last Friday to move to 2-0.