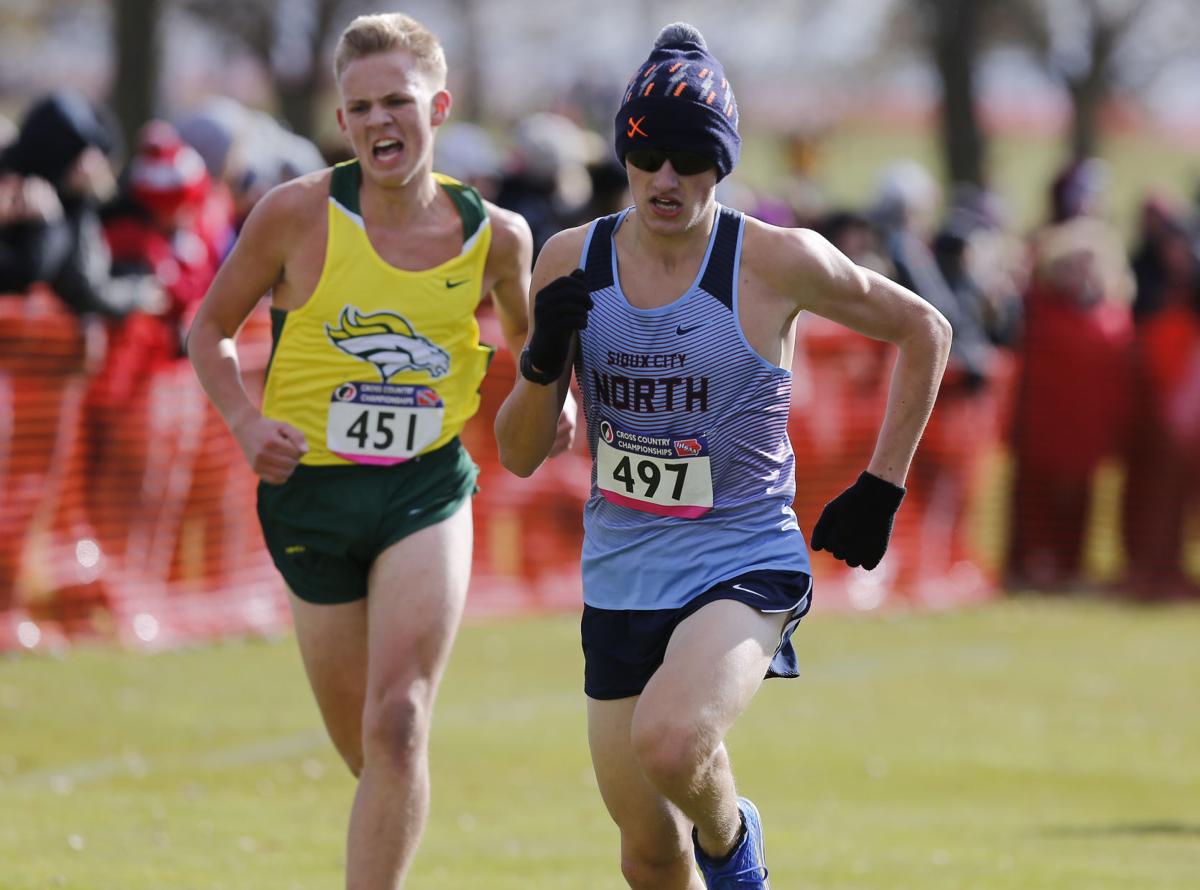 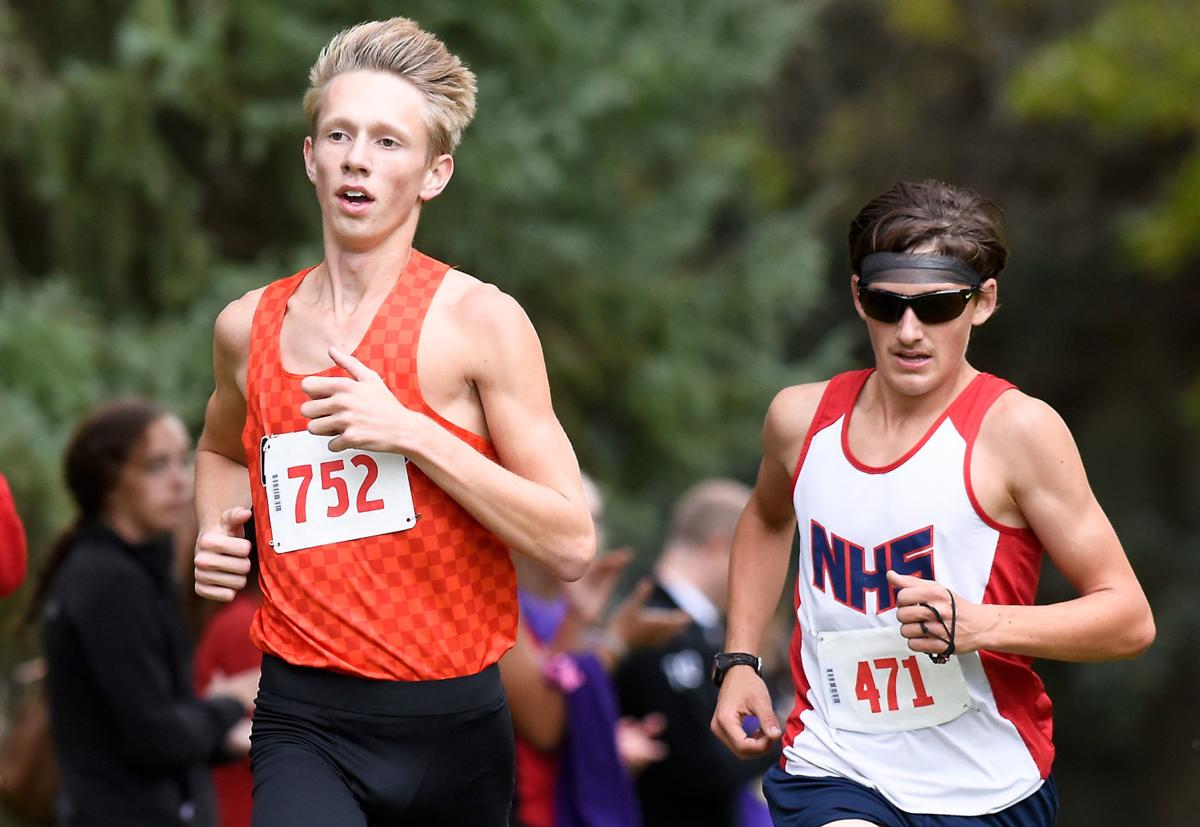 SIOUX CITY — As the North High School cross country team traveled east on Highway 20 the morning of the Iowa state cross country meet, Jaysen Bouwers was acting like his usual self, even when the week of the state meet was the polar opposite.

Bouwers just wanted to finish the race for himself and the Stars. The North junior exceeded those expectations and raised the bar for next year.

Bouwers was the ninth runner in the Class 4A race to cross the finish line on Nov. 2 at Lakeside Municipal Golf Course in Fort Dodge, and led the Stars to a fifth-place finish among the 15-team field.

Bouwers is receiving the 2019 Journal boys cross country runner of the year due to a strong regular season and his performance at the state meet. He completed the race in 15 minutes, 54 seconds.

“He didn’t know how he was going to feel when he stepped up to the line,” North coach Abdier Marrero said. “He was going to finish the race, and that’s what he told everybody. When the gun went off, he ended up feeling a lot better than he thought he was going to feel. He still didn’t have that gear, that push that he needed.

“He put himself in a good spot from the get-go, and from there, he let the race play out without forcing anything,” Marrero added.

Marrero didn’t talk about the race to Bouwers — or any runner, for that matter — on the drive over. The group of Stars boys and girls state qualifiers were having casual conversation until the bus pulled up to Fort Dodge.

“It was a cool feeling, actually,” Marrero said. “They knew they were ready to do something cool, but none of them felt like they had to.”

Bouwers crossed the finish line with a big smile on his face. He just wanted to finish the race, but instead, he helped give the Stars their highest finish at the state meet in program history.

Heading into the week, Marrero shut Bouwers down in the final week leading up to the state due to an IT band injury. He was running since January, went through a track season that ended at state, and a cross country season that saw several top-5 finishes.

His body was telling him to slow down, and that’s what Bouwers did.

However, it could have been a blessing in disguise the injury happened when it did.

Bouwers was just as eager to see his teammates run well, too. He had a supporting cast of several Stars behind him, and at the state meet, Will Lohr, Beshanena Gutema, Colin Greenwell and Gabe Nash helped Bouwers take North to its fifth-place finish.

Lohr believed Bouwers set the tone early by telling his team that even a top-3 finish was within the Stars’ reach.

“Early in the season, it was apparent that Jaysen was motivated and wanted to get us motivated,” Lohr said. “There was some stuff that made the rest of us think maybe, but Jaysen was like, ‘No, we can be top-3.’”

The rest of the North team didn’t fully buy in to Bouwers’ prediction until the first meet of the season in Ankeny.

North won that Aug. 27 team competition with 49 team points over Ankeny Centennial, and after that, Lohr and the rest of the Stars knew Bouwers was right.

“That got us going,” Lohr said. “We then realized top-5, maybe top-3 is reachable. Once we got in that rhythm that we could do this, it really helped us late in the year. It was a huge part of that motivation came from Jaysen.”

The Stars are just as eager for this upcoming track season and next year’s cross country season.

Now, North believes a 2020 Class 4A cross country state championship is as realistic as ever, and Bouwers will be in the running for an individual state title.

Six of the top-8 individual finishers in the Class 4A race were all seniors, and Bouwers was the No. 3 finisher among underclassmen. The only two non-seniors who finished ahead of Bouwers in Fort Dodge were Dubuque Hempstead juniors Ryan Winger and Jack Maloney.

North and Bouwers aim to compete in big races — the Roy Griak Invitational, for example — so they can be prepared for the MRAC meet, the district meet and the state meet.

“Jaysen already knows what level he should be at when he’s healthy,” Marrero said. “He knows who he can run with. When you talk about putting pressure on himself … he knows he’s the guy to beat.”

Looking ahead into the winter season, Bouwers isn’t taking any time off.

He, as well as other Stars cross country teammates, are trying out swimming for the first time. Lohr was the one who recruited his peers to join him in the pool.

There are nine Stars on the swimming roster who were on the cross country team.

“My recruiting pitch was basically, ‘You don’t have to be good, and you can still get good stuff out of it,’” Lohr said. “It worked on the strength of my legs. You build strength where running wouldn’t.”

Bouwers is ranked third in Class 4A on the boys side, one of two Stars' runners to make the top 10, while Downs was placed fifth among 4A girls.

METRO CROSS COUNTRY PREVIEW: North boys out to prove they belong in 4A championship conversation

The No. 7 ranked runner in the state, Lohr gives the Stars a powerful one-two punch -- and he's often finishing right behind Bouwers at the head of meets.

After struggles early in his career, Bouwers had a clean sweep as a senior: A dominant regular season, an individual state title and a team state title with the Sioux City North Stars.