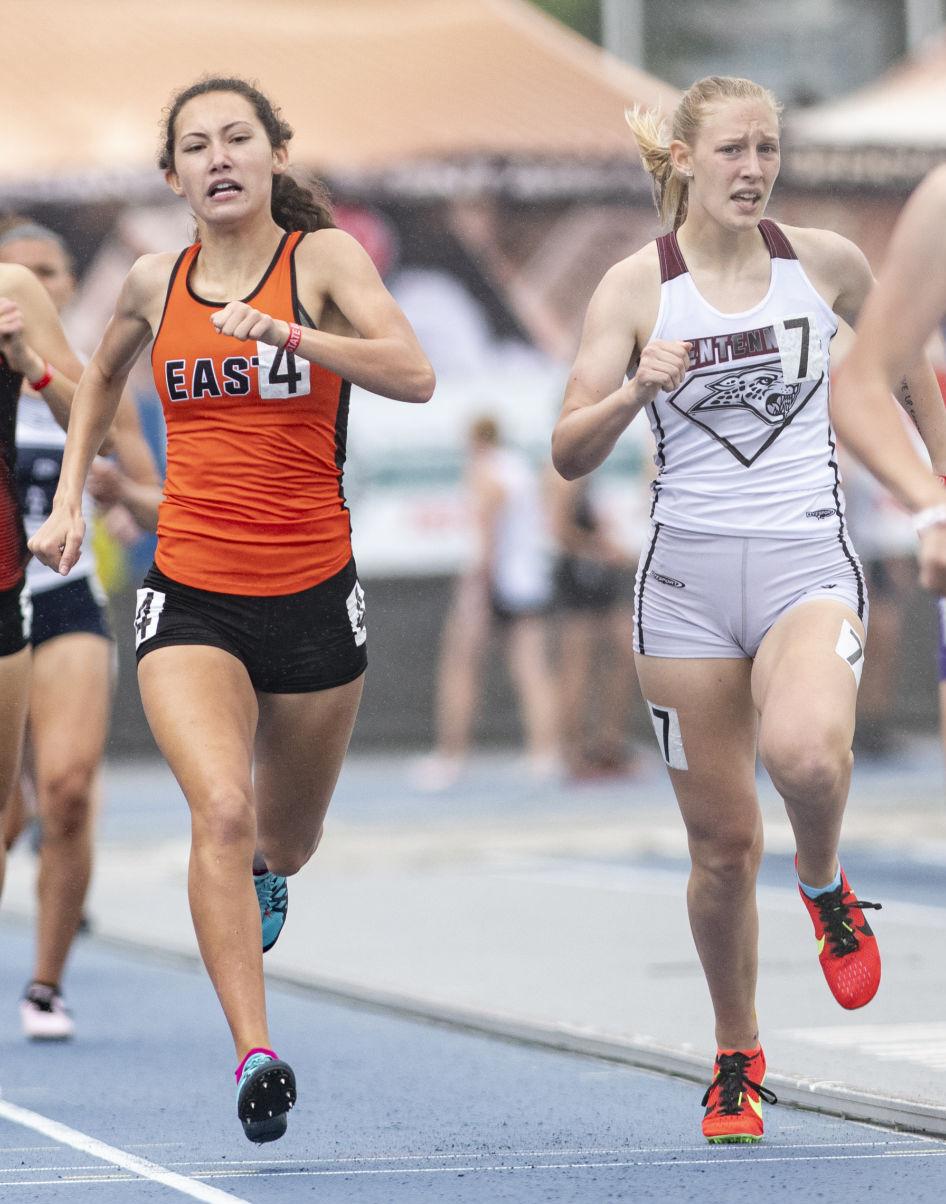 Kaia Downs (4) of Sioux City East competes in the Girls 4A 800-meter run at the 2021 Iowa High School Track and Field State Championships on May 22 in Des Moines. 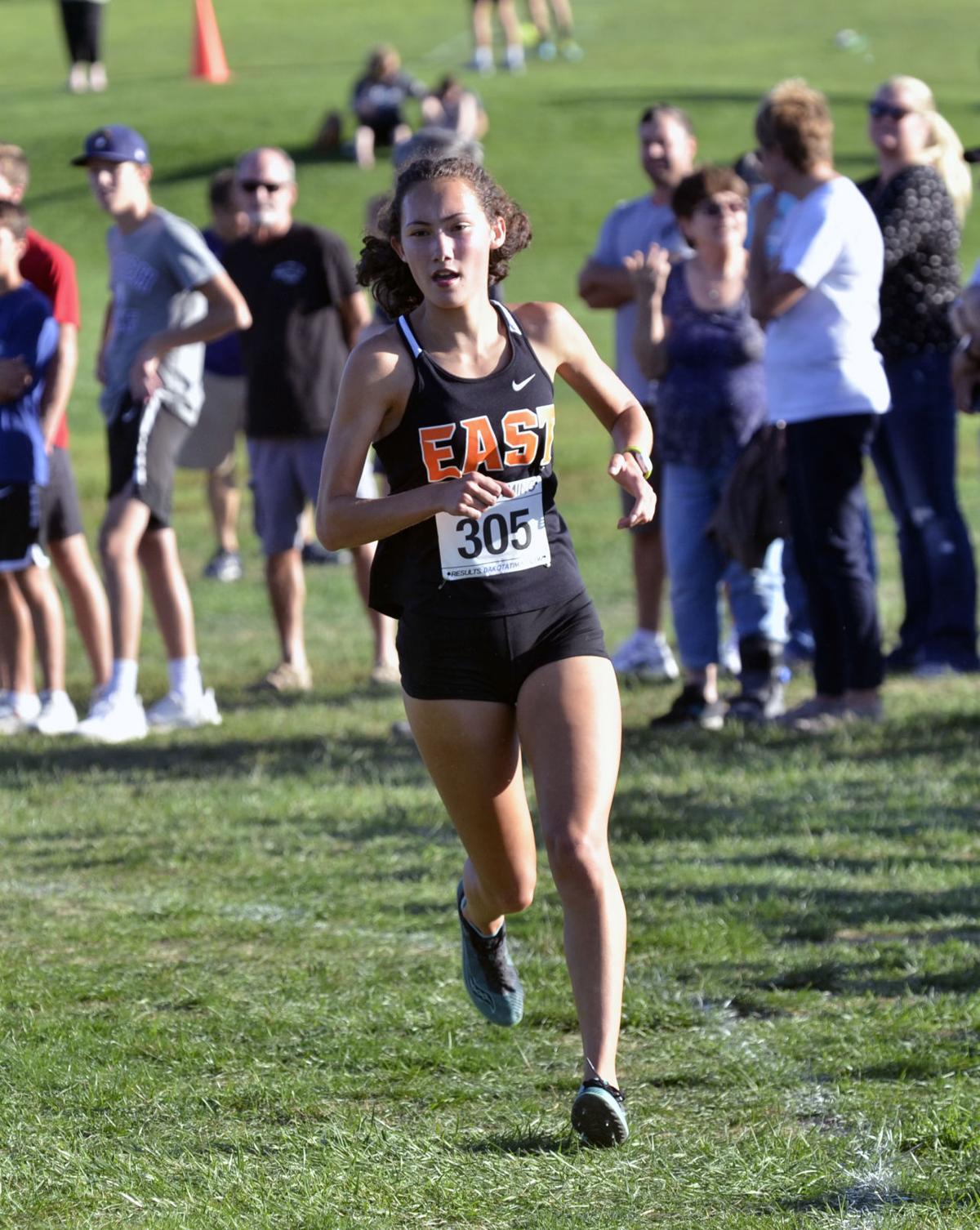 SIOUX CITY — Not long after Kaia Downs crossed the finish line at the Class 4A girls cross country state meet last month in Fort Dodge, the East High School senior said her favorite part was being a leader for all four years.

Downs certainly became someone younger runners could look up to.

That was a priority for Downs all four years.

“Cross country has been my favorite throughout my time at East High,” Downs said. “It is certainly a community-driven sport, and being able to be a leader all the way since I was a freshman. It’s fitting to end it here at state … it’s a nice ending to a really fun time.”

SIOUX CITY — East High School junior Kaia Downs knew she was going to have to compete against herself going into this cross country season.

Downs placed third this year at the state cross country meet, doing so for the second straight year.

The University of Missouri running signee is this year’s Journal Female Cross Country Runner of the Year, also for the second consecutive season.

“I’m happy with it, because for distance girls, they tend to slow down a little bit as they get older, but knowing that I’m maintaining, I’m definitely not disappointed,” Downs said.

She was seeded seventh.

Downs has replayed the race back in her mind a couple times, and maybe the one thing she wished she could have done differently is keep up with West Des Moines Valley senior Kamryn Ensley, who finished four seconds ahead of Downs.

Other than that, Downs isn’t disappointed with the outcome.

“Winning it would have been a dream come true, but just because you haven’t fulfilled your dreams doesn’t mean that you didn’t do something amazing,” Downs said. “Finishing third two years in a row is a great accomplishment. I think it’s just something I can build on. It’s something I definitely don’t regret. I ran the race I think I would have 1,000 times.”

Downs was able to run a little more freely, as she committed to Mizzou a few days before the state meet.

Downs was already welcomed as one of theirs, instead of being a recruit.

She also liked the academic opportunities at Mizzou, and liked exploring what the school in Columbia, Missouri, had to offer.

Academically, Downs is interested in becoming a physicians’ assistant. Her major would be Health Sciences.

“They showed me what they had and nothing more,” Downs said. “They just like, ‘This is what we have to offer, we would love to have you.’ They were honest and genuine people, and that’s the type of people I like to be around.”

Now that those milestones are out of the way, Downs has her sights set on the track season.

She said that the season is a mixed bag.

Sometimes she has a good race, and then there are times where she doesn’t finish with a good time, like at Valley last spring.

“Track is nice, because if I’m tired, I’m in good condition, even if I don’t have a good time,” Downs said.

That’s where her offseason conditioning comes into play.

According to Downs, she’ll run more miles over the winter than she has in any past offseason in-between cross country and track.

There are times that previous runners have hit, and Downs wants to have her names beside those times, too.

If she wants to make those marks, she knows the work comes in the winter, not in the spring.

“I want to do it just to prove to myself that I’m a great athlete because I view those girls as great athletes,” Downs said. “As for race strategies, I don’t want to let it get away from me again.”

Downs usually works out in the middle of the day, because that’s how her schedule sets up.

She’ll run between a morning lifting session and basketball practice.

Downs said she lifts twice or thrice a week, and runs as many as six days a week.

“I like predictability in my routine,” Downs said. “When my schedule gets really busy — especially with basketball — I can get out and go and get it all done.”

She doesn’t listen to music when she runs. Downs prefers listening to the birds chirping and other natural sounds around her.

Downs is looking forward to running and working out at Mizzou, as Columbia has several trails that the future Tiger can explore.

She knows that she has to stay in shape and keep extra focus on the track season, as she’ll be likely asked to do more in basketball this season.

That happened a little bit last season. Downs was the Black Raiders’ No. 5 leading scorer, and she’ll likely be asked to be a 38-percent shooter as the preseason-ranked Black Raiders try to return to state for the second time in three years.

The Black Raiders open the basketball season Tuesday at home against Spencer.

Kaia Downs (4) of Sioux City East competes in the Girls 4A 800-meter run at the 2021 Iowa High School Track and Field State Championships on May 22 in Des Moines.