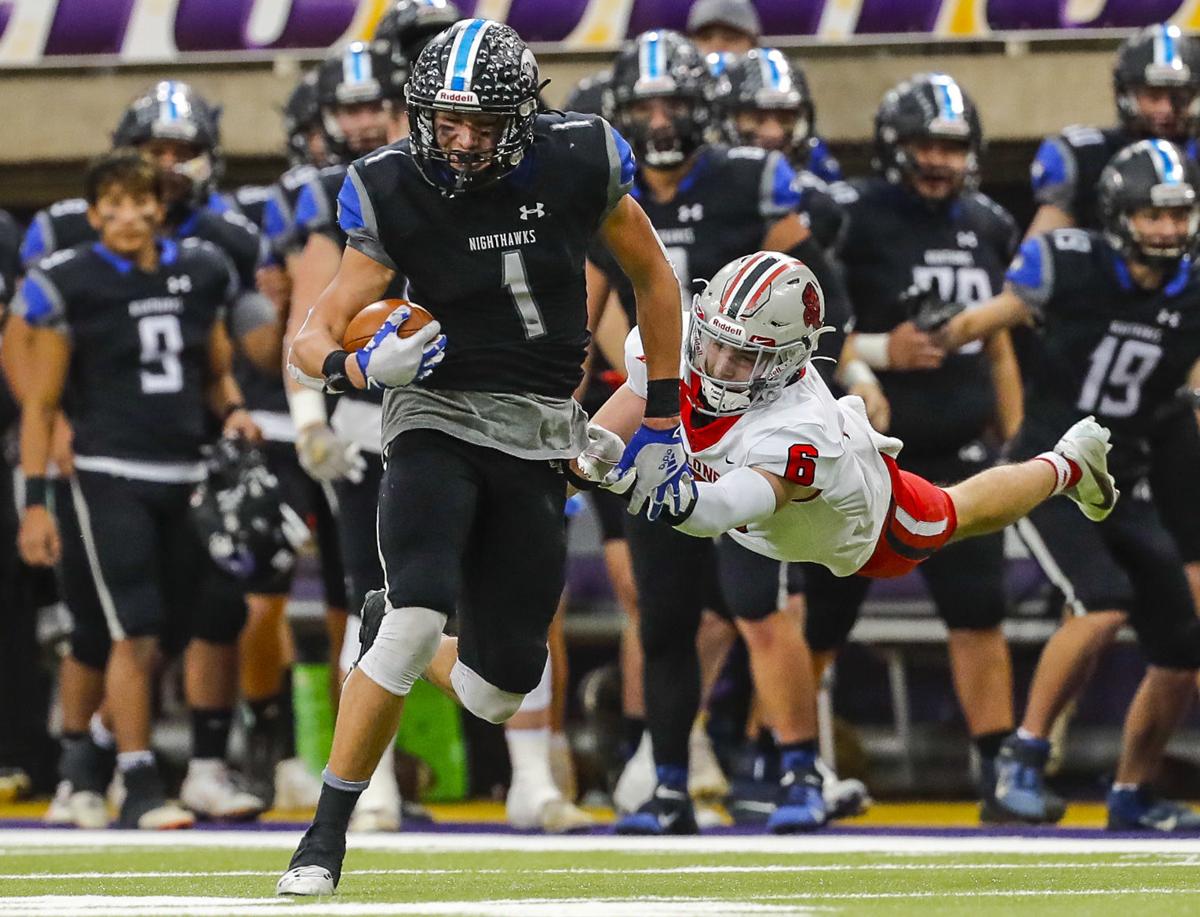 Boyden-Hull/Rock Valley senior Landyn Van Kekerix drives through a diving tackle from Harlan Community junior Aidan Hall on Friday during the championship game of the state football championships at the UNI-Dome in Cedar Falls. 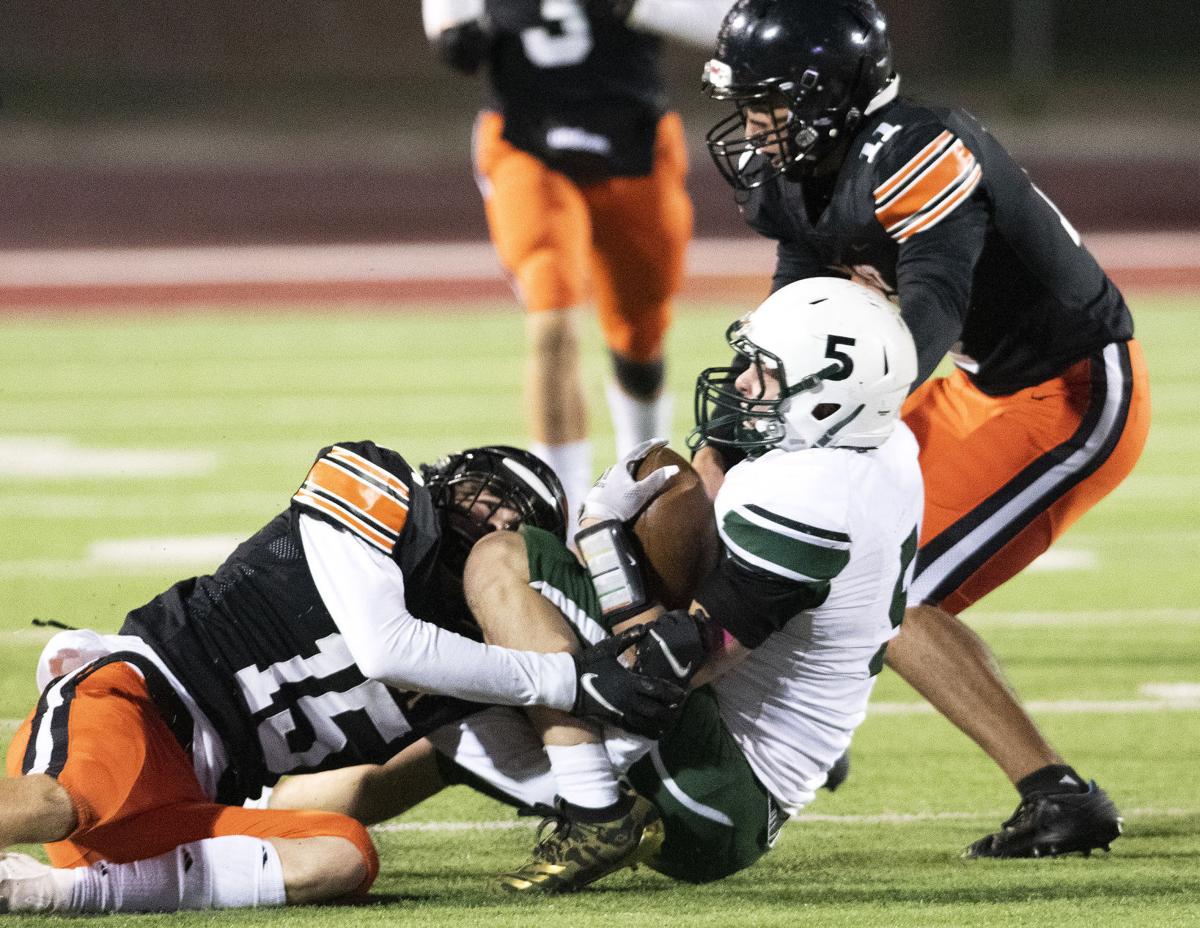 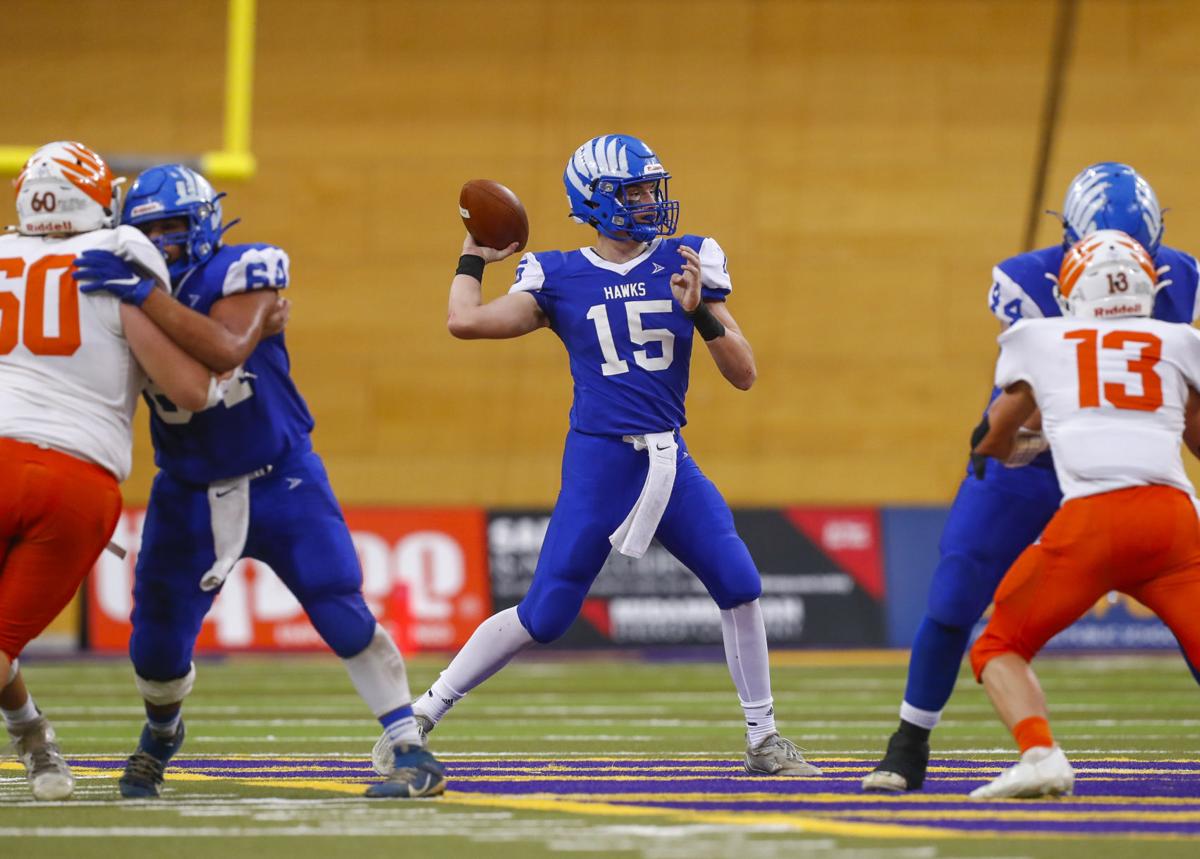 Easton Valley junior Cael Ortmann looks to make a throw against Remsen St. Mary's on Nov. 10 during the semifinal round of the state football championships at the UNI-Dome in Cedar Falls.

Sergeant Bluff-Luton received four honorees in Class 3A, while in 5A, East’s Nick Wells and Kelynn Jacobsen were selected as was West senior Drew Benson.

Schenkelberg had 938 receiving yards, and he had eight receiving touchdowns.

Imming was the team’s tight end with 11 touchdowns, but he was just as solid defensively. The Iowa State football recruit led the Warriors with 53 total tackles, and he had 33 solo tackles.

Tyler Smith, meanwhile, had 2,271 passing yards, and the junior quarterback had 511 rushing yards.

Smith had a combined 32 touchdowns.

Lutgen was fifth in total tackles, as the junior defensive end had 33. He also had five sacks.

Wells earned a second-team defensive lineman spot in Class 5A, while Jacobsen, a Black Raiders junior, earned a spot as a wide receiver on the third team.

Here’s a look at the other area all-staters, in descending class size:

Andrew Hough, Spencer: The Tigers senior offensive lineman was named onto the first team. The Tigers amassed 3,704 yards as a team.

Logan Huckfelt, Spencer: The junior lineman was named onto the second team offensively. Defensively, Huckfelt had 5.5 tackles for loss.

Brandon Vander Sluis, Le Mars: The defending Class 3A champion in the discus made it as a second-team offensive lineman. The Bulldogs had 3,358 total yards offensively.

There were two Nighthawks who received first-team honors: Landyn Van Kekerix (WR/RB) and Tanner Te Slaa as a punter.

Van Kekerix led the Nighthawks with 34 touchdowns; he had 17 rushing and 14 rushing.

Kats was selected as a wide receiver, Kramer as an offensive lineman and Pick as a linebacker.

Gonzalez was 17-for-20 on PATs, and he made 89 percent of field goals. His longest made field goal was 34 yards.

MOC-Floyd Valley’s Josiah Bundt was also a third-teamer, leading the Dutch with 3.5 sacks and second with 38.5 total tackles.

West Lyon earned six spots in the all-state list in Class 2A.

Jacobson was a third-teamer while the other five were on the first team.

The Wildcats went to the Class 2A title game, where they fell to Southeast Valley last week. The Wildcats had 4,724 all-purpose yards, and 3,155 on the ground.

Ter Wee was third among the West Lyon defense with 44 tackles. He also had four sacks.

They had two first-teamers (lineman Lyle Moore and offensive utility Zach Lutmer), senior linebacker Rex Van Wyhe and defensive back Cooper Spiess as second-teamers, and sophomore Graham Eben was a second-team defensive back.

Lutmer had 31 total touchdowns, including 22 on the ground. Lutmer had 1,529 all-purpose yards.

Diersen was 36 yards shy of 1,000 yards on the ground, and he had eight rushing TDs.

Spirit Lake’s Zach Jensen was a first-team linebacker, while Jack Latham was a third-team receiver.

The West Sioux Falcons got seven of their players on the all-state list.

Bultman had a team-high 12 rushing touchdowns along with 1,287 rushing yards.

Schwiesow was the No. 2 receiver with 614 receiving yards.

Duenas has a defensive TD, while Lynott had a pick-six.

Deitering, Luscombe and Harriman were among the Top 5 in tackles defensively, with Deitering leading the way with 69.5 total tackles.

Harriman led the Raptors with 26 total touchdowns, most of them on the offensive side.

There are six Siouxland players who made it onto the first team, and Hartley-Melvin-Sanborn as well as Woodbury Central had two of them.

The two HMS players were lineman Lance Berends and defensive back Kooper Ebel.

Ebel led the Hawks in offensive touchdowns with 28.

McGill led the Wildcats with 1,443 receiving yards, and defensively, the junior had 68.5 total tackles.

Westwood junior Jackson Dewald made it as a first-team linebacker, but he had a solid offensive season.

The Wildcats and Hawks also got a second-teamer. Kluender was a second-team QB, while Hawks junior Travis Kamradt made it as a linebacker.

Wesley Galles, Remsen St. Mary’s: Galles was a main cog for the Hawks’ offense, and he is recovering from a neck injury sustained from a playoff game.

Damon Schmid, Kingsley-Pierson: The Panthers senior made it to the first team, returning three kickoffs for TDs. He had 560 return yards.

Izak Baron, Newell-Fonda: Baron was a key lineman who allowed the Mustangs to collect 5,459 yards.

Boyden-Hull/Rock Valley senior Landyn Van Kekerix drives through a diving tackle from Harlan Community junior Aidan Hall on Friday during the championship game of the state football championships at the UNI-Dome in Cedar Falls.

Easton Valley junior Cael Ortmann looks to make a throw against Remsen St. Mary's on Nov. 10 during the semifinal round of the state football championships at the UNI-Dome in Cedar Falls.