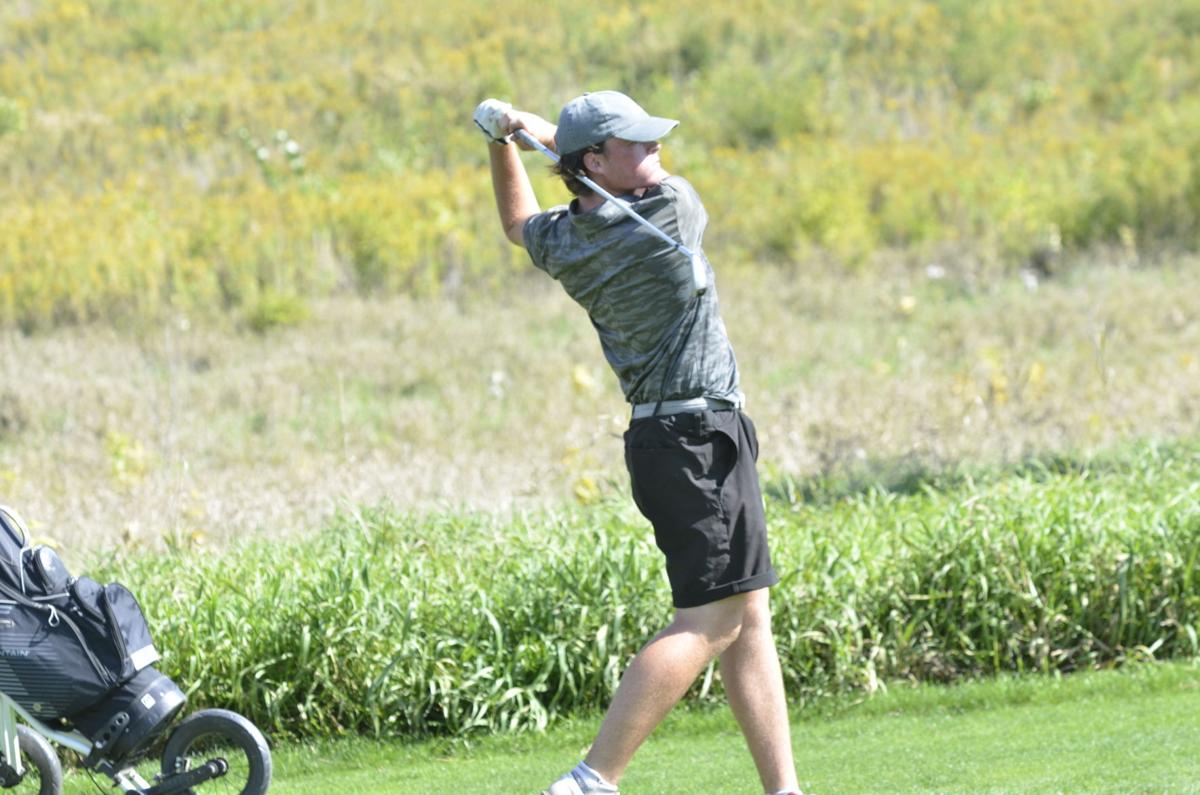 Sioux City East golfer Ethan Spier watches a golf ball in flight on Tuesday at the MRAC Conference Meet at Whispering Creek Golf Course. Spier won the meet with a score of 77. 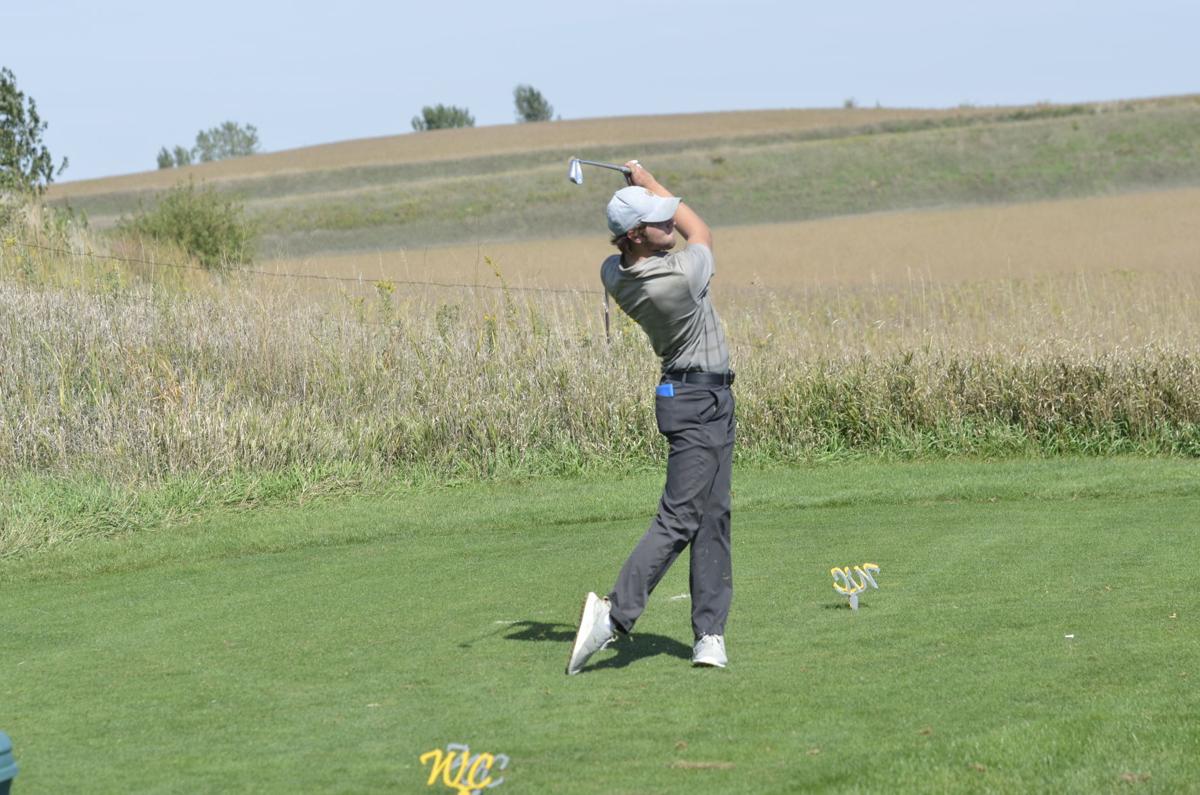 SBL golfer Schuyler Warren swings the club on Tuesday at the MRAC golf meet at Whispering Creek. Warren finished third with a score of 80. 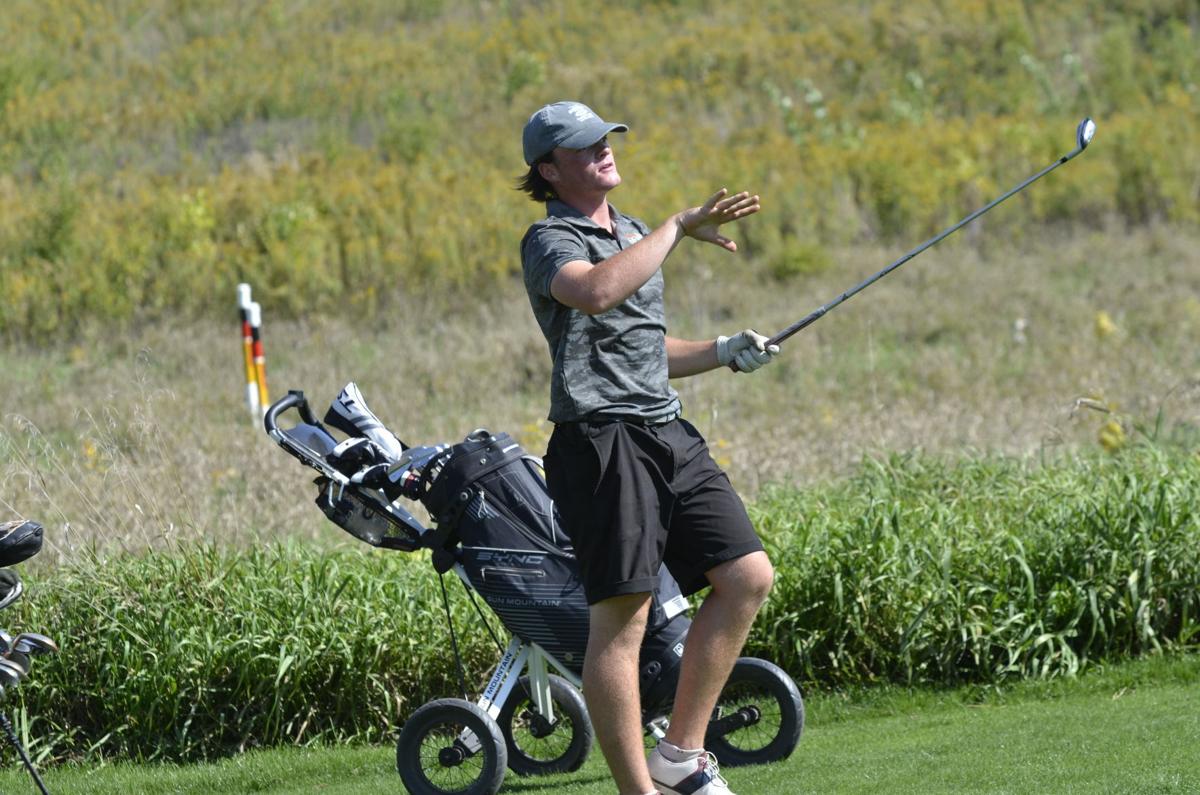 SIOUX CITY — In golf, it often seems that the last hole is the hardest.

Spier went into the par-five final hole of the MRAC Conference Meet with a five-shot lead over Bishop Heelan’s Jack White, who finished second, but carded an eight for triple-bogey.

It wasn't his best hole of the day, but with his final putt, the East senior clinched his first MRAC Conference championship with a score of 77.

Along with Spier’s individual title, the Black Raiders won the team championship as well with an overall score of 330, beating Bishop Heelan by three strokes after the Crusaders finished at 333.

Spier’s victory comes less than a week after winning the Sioux City East Triangular last Wednesday., which he won with a nine-hole score of 37.

The Black Raiders also golfed on Monday at Landsmeer Golf Club in Orange City, and Spier shot a 68.

His Tuesday round started off in bumpy fashion, as he bogeyed the first hole and shot two over on hole number three. But he soon settled in, and finished with four birdies on the day.

“He had a little bit of a hiccup on the last hole, but this is his home course,” East coach Brian Drent said. “He’s been playing really well. He played great yesterday up in Orange City, so I’m just incredibly happy. He works incredibly hard, and he’s just a student of the game. I’m just happy he got an opportunity his senior year to finish with a championship.

“For him to finally break through today was really a neat deal for him. It’s his senior year, it’s his home course, and he’s here every single day. He made it interesting, but I’m still very happy for him.”

One of Spier’s close friends on the course is Sergeant Bluff senior Schuyler Warren, who finished third overall on Tuesday with a score of 80. Warren won the conference tournament last season, and although the two are currently MRAC rivals, Spier is hoping that the two of them can team up soon.

“We’ve been playing golf since we were freshmen together,” Spier said. “He has such a good swing, and I really hope me and him can find a college that we can play at in the future together. That would be cool.”

After Spier, White, and Warren, East’s Drake Anderson and Heelan’s Brayden Michalak were next in the standings, with scores of 81. Dylan Susemihl of Le Mars, Grant McGrory of Sioux City North, Parker Lutgen of SB-L, and Jacob Pleuger of North all shot 83's, and Cole Quellete of Le Mars shot an 84 to round out the top 10.

SB-L took third in the team standings with a team score of 335, with Le Mars six strokes back at 341, for fourth place. North finished fifth overall at 352, and Council Bluffs Lincoln took sixth with a score of 474.

Sioux City West sent a pair of golfers to the meet, in Sam Johnson and Sam Dattolico. Johnson tied for 31st with a score of 107, and Dattolico carded a 108 to tie for 33rd.

Tuesday's victory gives Spier and the Black Raiders a boost going into next week’s district meet. Though he was unhappy with his 77, Spier has confidence that he will be able to bounce back.

The district golf meet will be played next Tuesday at Whispering Creek, at 10 a.m.

IDA GROVE, Iowa — It took nearly the whole game, but as the clock ticked down and the fall air turned chilly on Friday night in Ida Grove, the…

OABCIG football looks to bounce back from rare loss

IDA GROVE, Iowa — The No. 4 ranked OABCIG High School football team goes into this Friday’s game hoping to bounce back from a loss. It’s an un…

Making a mark: OABCIG's Beckett DeJean wants to make his own name

IDA GROVE, Iowa — His last name is synonymous with high school football success in the state of Iowa, but Beckett DeJean doesn’t want to just …

SIOUX CITY — The key to the Sheldon High School volleyball team’s strong start to 2021 might be their hitting. Or it could be their strong pas…

SIOUX CITY — There will be a new starting goalie this season for the Sioux City Musketeers, that much is certain.

Briar Cliff baseball to play at Field of Dreams next September

SIOUX CITY — If you build it, Briar Cliff will come.

Sioux City East golfer Ethan Spier watches a golf ball in flight on Tuesday at the MRAC Conference Meet at Whispering Creek Golf Course. Spier won the meet with a score of 77.

SBL golfer Schuyler Warren swings the club on Tuesday at the MRAC golf meet at Whispering Creek. Warren finished third with a score of 80.