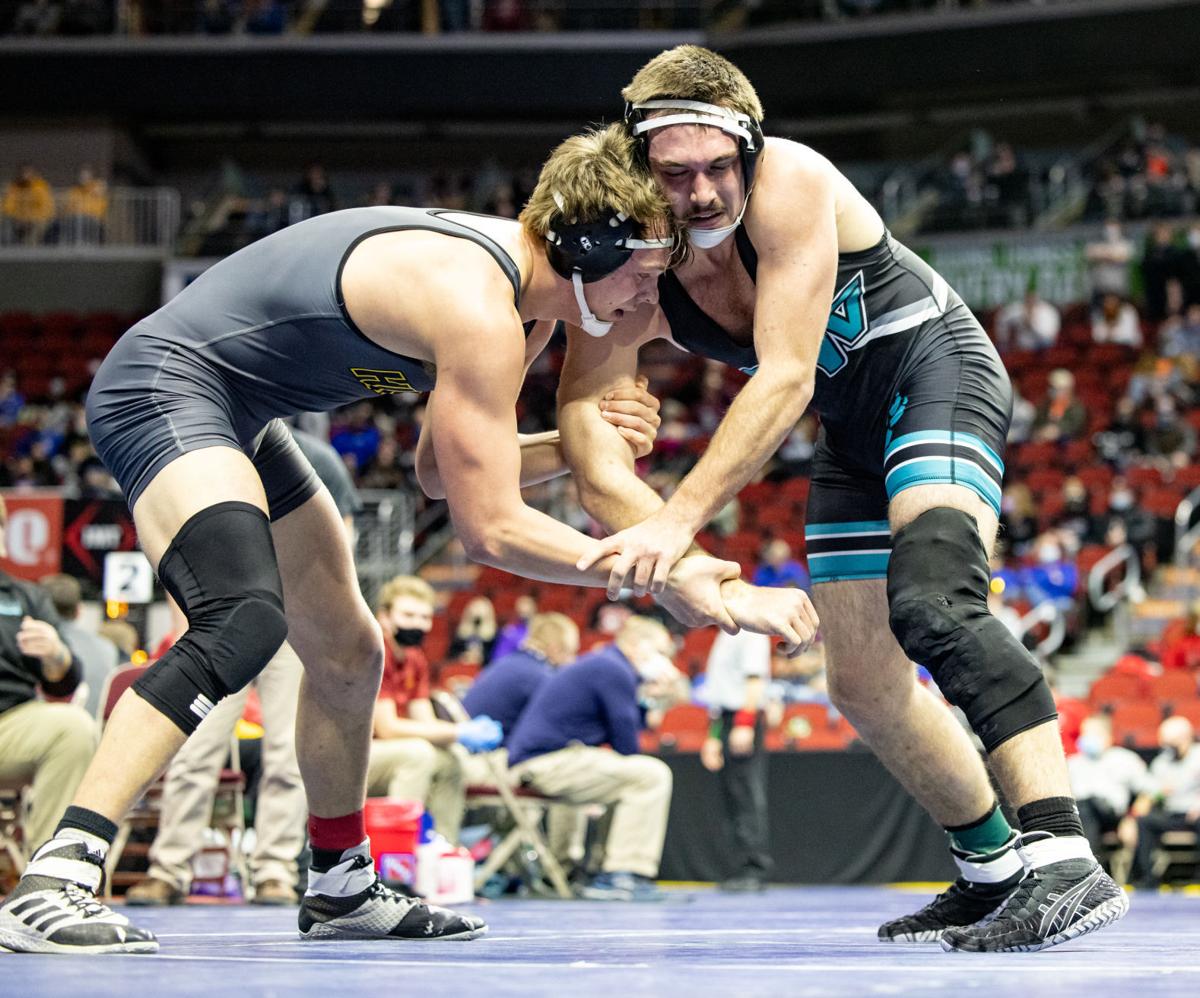 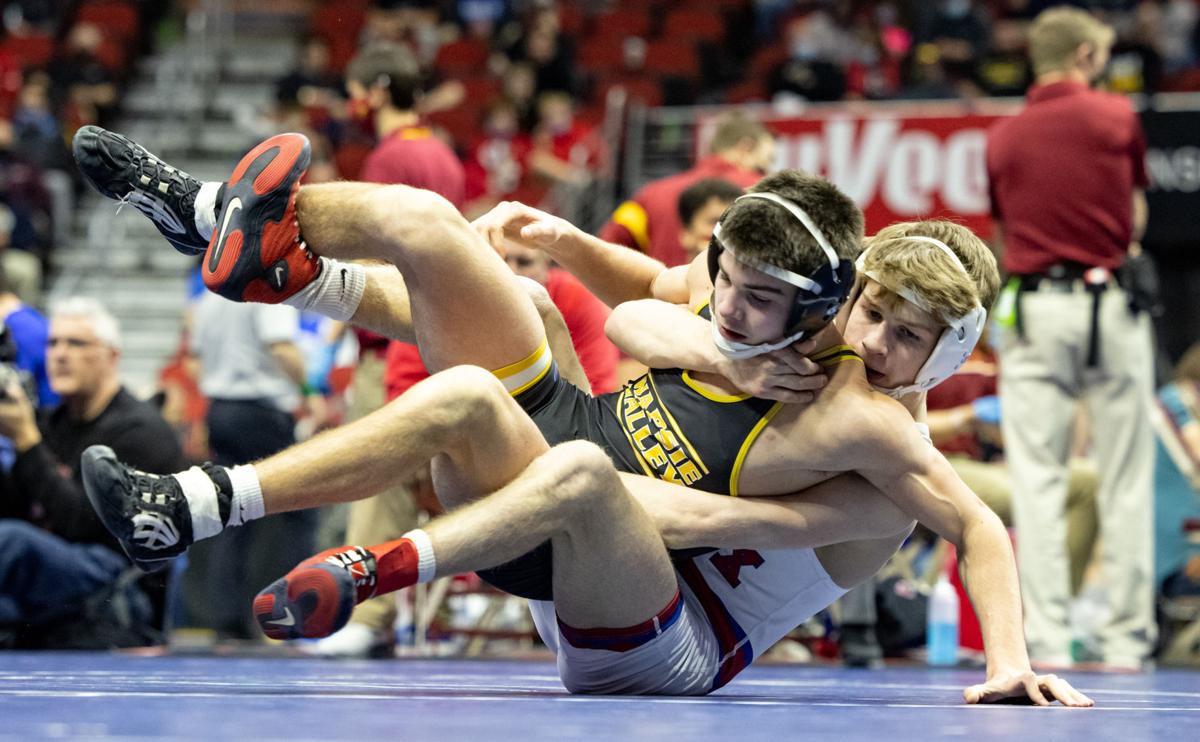 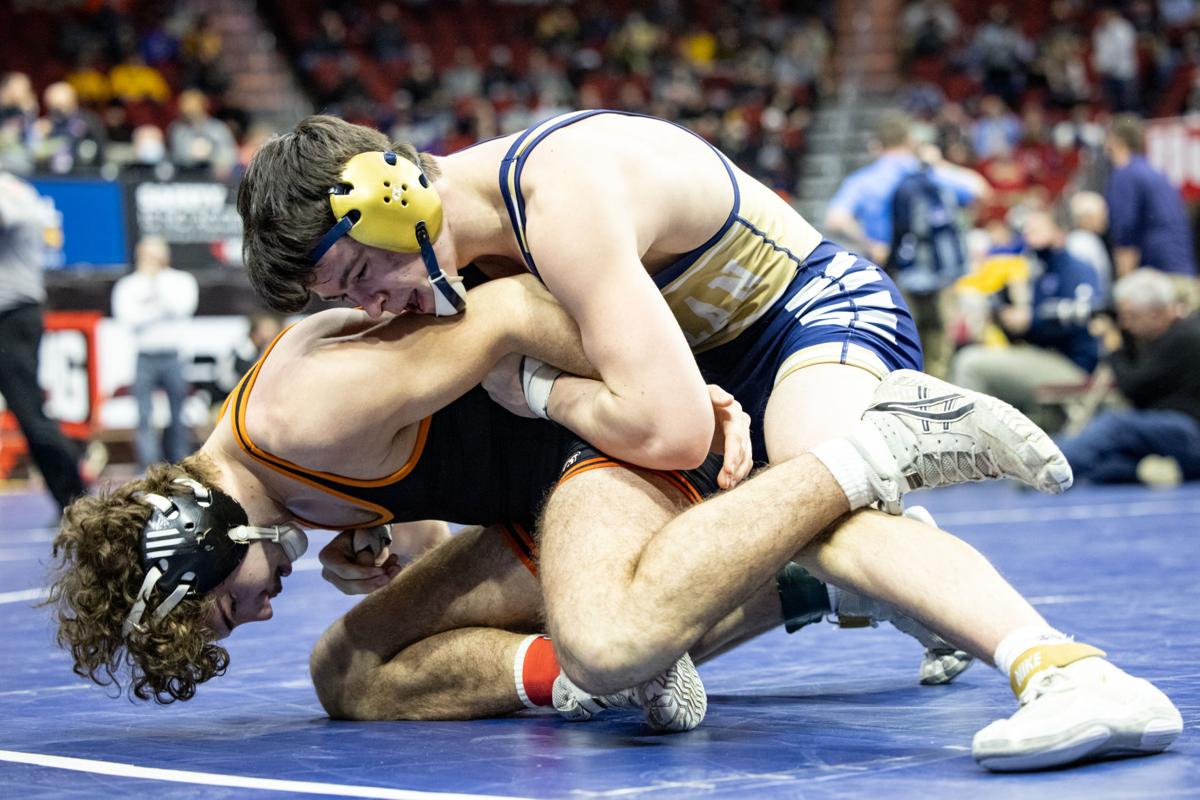 DES MOINES — For the first time in 15 years, the West High School wrestling team will send a competitor to the podium at the state tournament in Des Moines.

After losing in the first round on Thursday, West senior Ethan Emmick won two consolation matches, and found himself in the top-8 of the Class 3A 145-pound class, entering the consolation semifinals on Friday night.

Emmick became the first wrestler from West to make the podium since 2006, and Jan George was the Wolverines’ coach at the time.

The current Wolverines’ coach, John Hessenius, was thrilled that Emmick gets to stand on top of the podium when it comes time Saturday night.

“This is an extra push for the team to encourage them to get better,” Hessenius said. “The team saw how he worked and how much of a leader he was and how hard he worked just so he could make it and see him achieve his goal upon goal.”

Emmick got to the consolation semifinals by beating Mason City’s Cooper Wiemann in a 53-second win by pinfall, then on Friday, he pinned Council Bluffs Lincoln’s Jude Ryan in 5:31.

Emmick was trailing by a couple points when he made a move on Ryan, and Ryan was unable to get out of Emmick’s hold.

Emmick used a headlock to a half-nelson to secure Ryan and his spot on the 145-pound podium.

Hessenius was screaming at the top of his lungs at his wrestler, encouraging him to pull any tool he needed to out of his proverbial box.

“He never stopped wrestling,” Hessenius said. “He knew he had to have his mentality ready and stay moving.

Earlier in the season, Emmick lost to Ryan in a 10-2 decision, but Emmick’s plan was to never give in, even toward the end.

“Anything is possible in wrestling overall, but Ethan has a lot of tools in his tool box that sometimes come out and they get used,” Hessenius said.

Hessenius said that seeing Emmick’s success will hopefully give the coaching staff more motivation to develop the younger wrestlers, so it’s not another 15 years until another Wolverines wrestler gets on the podium.

Emmick wasn’t the only local metro wrestler who had a good day.

North senior Nick Walters won his quarterfinal match against Lewis Central’s Tabor Dominguez, and that match, just like the first-round match on Thursday, ended at the four-minute mark.

Mitchell Joines won his quarterfinal match on Friday at 170 pounds in Class 2A. He defeated Charles City’s Caden Collins in an 8-4 decision.

Ethan DeLeon will also see a podium spot at 145, as he pinned Clarion-Goldfield-Dows’ Remington Hanson in a 2:43 pin.

Sergeant Bluff-Luton senior Jack Gaukel won both of his opening matches, both in convincing fashion.

His first win was a 16-1 technical fall over Teegan McEnany of Independence 16-1, then on Friday in the quarterfinals, Gaukel beat Hampton-Dumont’s Carl Barkema in an 11-4 decision.

Harlan’s Luke Musich beat Koedam in the second round of the consolations, by a score of 3-2.

Anderson has a tough task, facing Lisbon’s Cole Clark in the championship.

At 195 pounds in Class 1A, Tristan Mulder clinched a spot to the championship by beating Don Bosco’s Cedric Yoder in a 5-0 win.

Mulder will face Tripoli senior Blake Brocka in the final.

Even though Mikey Baker didn’t make it to the championship, he secured his 100th win of his career on Friday.

To see more photos and results, go to siouxcityjournal.com.