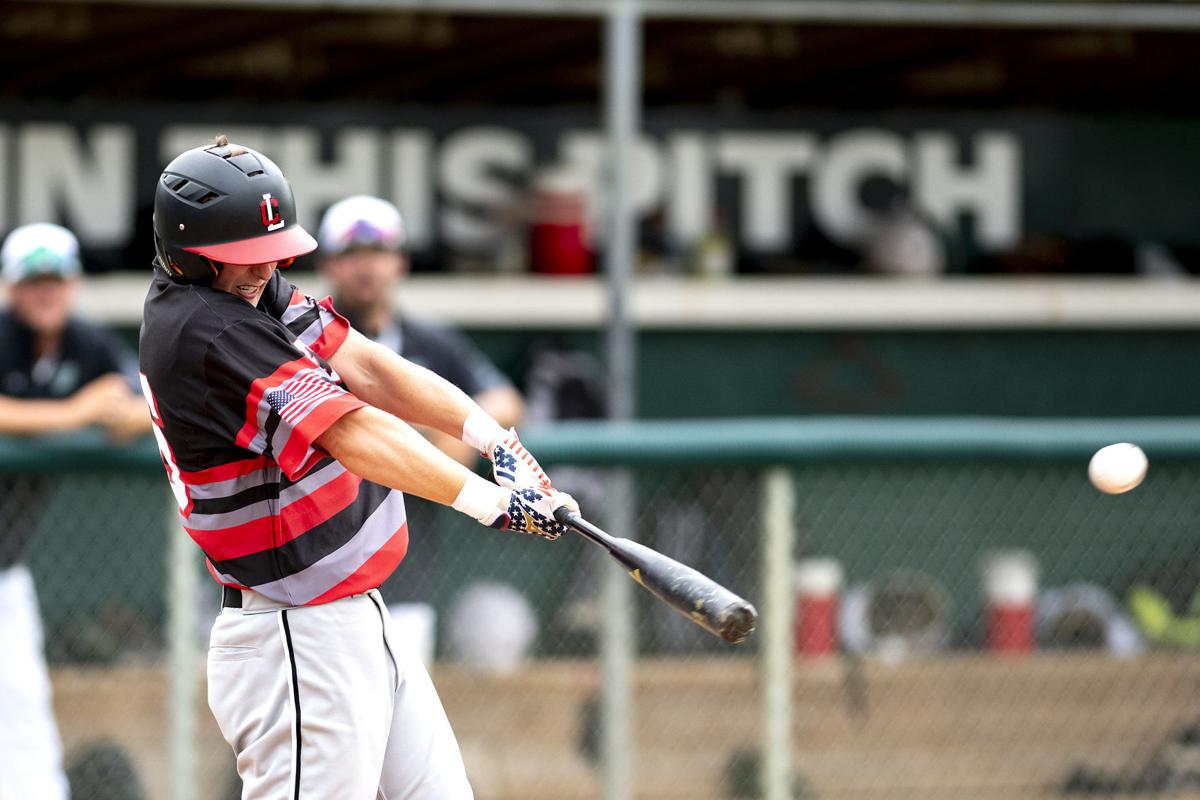 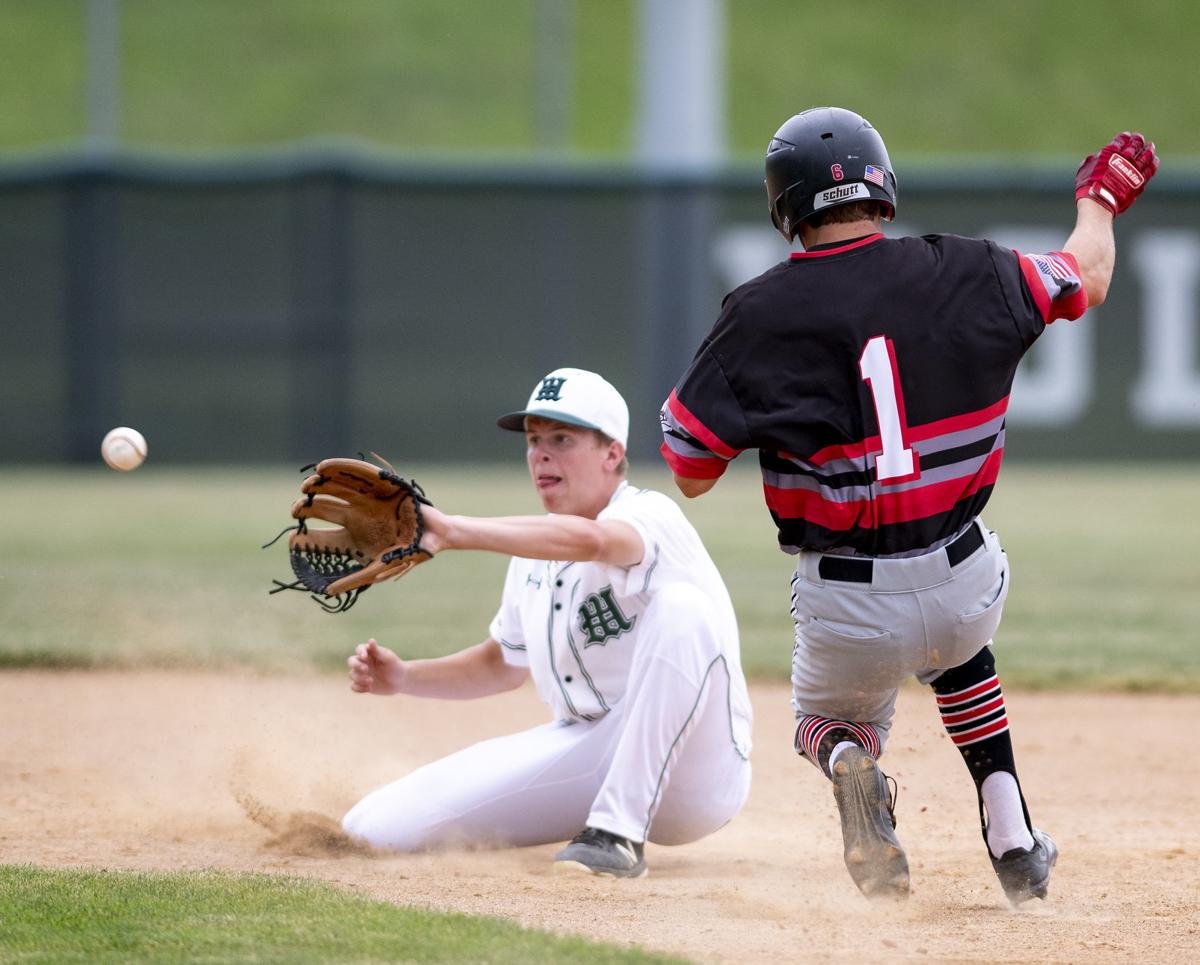 Le Mars' Anthony Lamoreux sprints to second base as West's Drew Benson catches the ball to get him out during Tuesday's doubleheader with Le Mars at Sioux City West's baseball field in Sioux City.

SIOUX CITY — The maiden voyage through the Missouri River Conference baseball waters has been relatively smooth for Le Mars High School so far.

The Bulldogs improved their MRAC mark to 5-2 with a 10-3 triumph at West in the first game of a doubleheader on Tuesday.

Le Mars, moving to 6-2 overall with the nightcap still on the docket, jumped to an 8-0 lead before putting the opener on ice.

Camden Schroeder was the beneficiary of an early outburst by the Bulldogs, pitching a quality 5 2/3 innings to earn the victory.

Le Mars got a little help from the Wolverines, who committed a couple of errors and a balk that led to three runs in the second inning, then broke it open by sending 10 batters to the plate and scoring four times in the third.

Schroeder, a senior lefthander, was cruising along until giving up four straight hits after two were out in the fourth. That led to a couple of runs for West, which also scored in the sixth when Schroeder plunked Caleb Belt with the bases loaded.

“If anything, the past few games I’ve probably been more happy with our pitching,” Le Mars coach Trent Eckstaine said. “We won a couple of close games against (Council Bluffs Thomas Jefferson) and Cam comes out and throws a good one for us here. The bats will come, the arms have been the biggest concern for me.

“We’ve kind of had a nice welcoming for the first year (in the MRAC) but we’re going to have to play some good ball coming up.”

Le Mars faces a daunting final week of the regular season, playing doubleheaders against Bishop Heelan, Sergeant Bluff-Luton and East, all ranked teams the Bulldogs are competing with for the league title.

“This is what we came here for,” Eckstaine said. “This is where our competition is and it’s going to make us better. So far, I’m happy with what’s going on.”

Skylar Hansen took the pitching loss, allowing seven runs on five hits while walking five and hitting a batter in 2 2/3 innings. Dylan Cooper fared much better in working the rest of the game, but the damage had already been done.

Junior third baseman Braiden Hurd came into the game with a hefty .476 batting average and added another hit and knocked in a run in just one official at-bat.

“I’m seeing the ball a little better this year and we’ve got a little bit different practice going on,” Hurd said. “It’s a little tougher at practice and it makes games easier.

“We’ve got the big part of our schedule coming up so hopefully we can play at our best and show what we can do.”

Ethan Kuiken and Brady Williams got back-to-back singles in the second for Le Mars and each eventually scored on a throwing error. Carter Alcorn, who walked, made it 3-0 by coming home on a balk.

Le Mars increased its lead to 8-0 in the fourth when Hurd doubled and eventually scored on a sacrifice fly by Kuiken.

After West got on the board on an RBI single by Devin Frye and a run-scoring double by Colby Nieman in the fifth, the Bulldogs tacked on two more runs.

Hurd drove in one with a sacrifice fly, while Carter Arens walked, stole second, went to third on a throwing error and scored on a wild pitch.

Williams replaced Schroeder after he hit Belt with the bases loaded in the sixth. He retired Jaren Hollingshead on a good defensive play by third baseman Hurd to end the sixth.

Eckstaine made another pitching change in the seventh, bringing in Josh Pratt to record the final two outs. Pratt was scheduled to make the start in the second game.

"Sports are my life basically. I love doing them all of the time," Ihnen said.

METRO ATHLETE OF THE WEEK: Heelan's Kiana Fjeldheim finds the sweet spot at the top of the order

Entering a Missouri River doubleheader Thursday against Le Mars, Fjeldheim leads the Crusaders with a .475 batting average and hits with 19 in multiple spots throughout the lineup.

The Crusaders, ranked No. 7 in Class 3A, snapped an 11-game win streak for the Black Raiders, No. 4 in Class 4A, in the opening game of a Tuesday doubleheader. Hogue allowed just one hit.

“They’re like two peas in a pod,” Warriors coach Matt Nelson said. “They both like to work and they both can’t get enough."

Le Mars' Anthony Lamoreux sprints to second base as West's Drew Benson catches the ball to get him out during Tuesday's doubleheader with Le Mars at Sioux City West's baseball field in Sioux City.