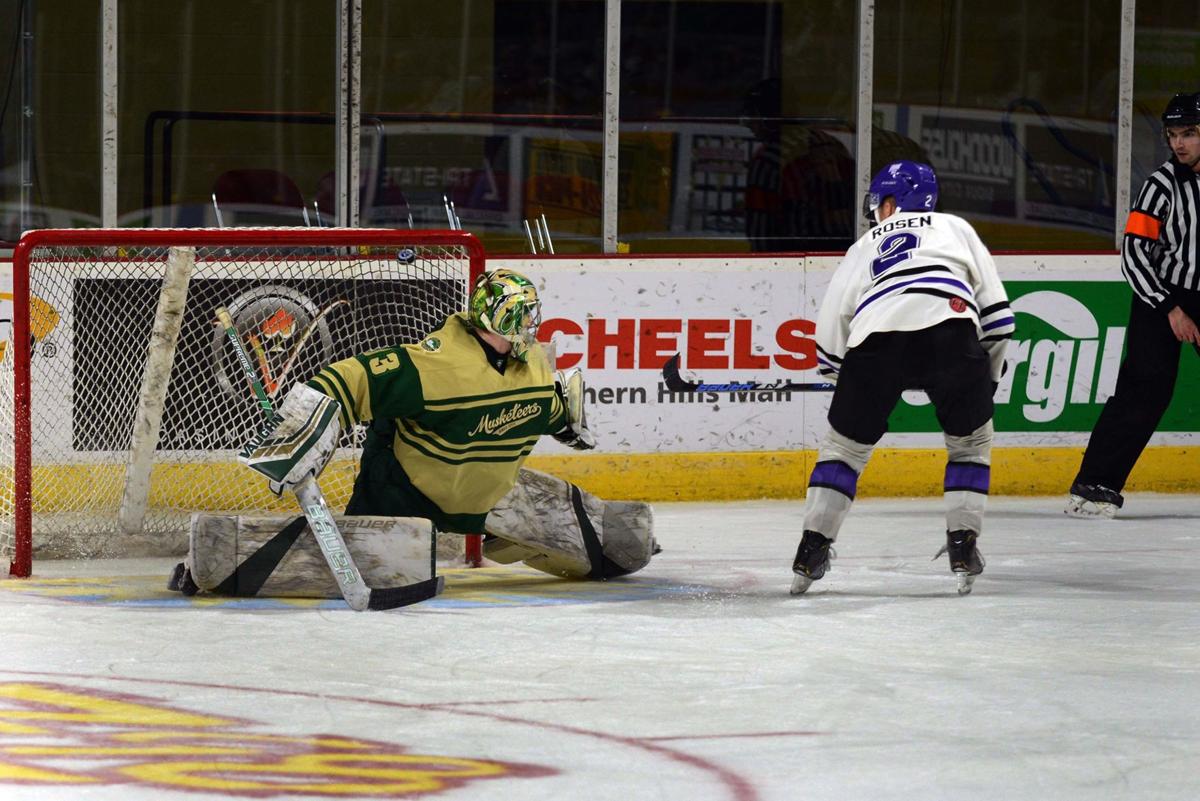 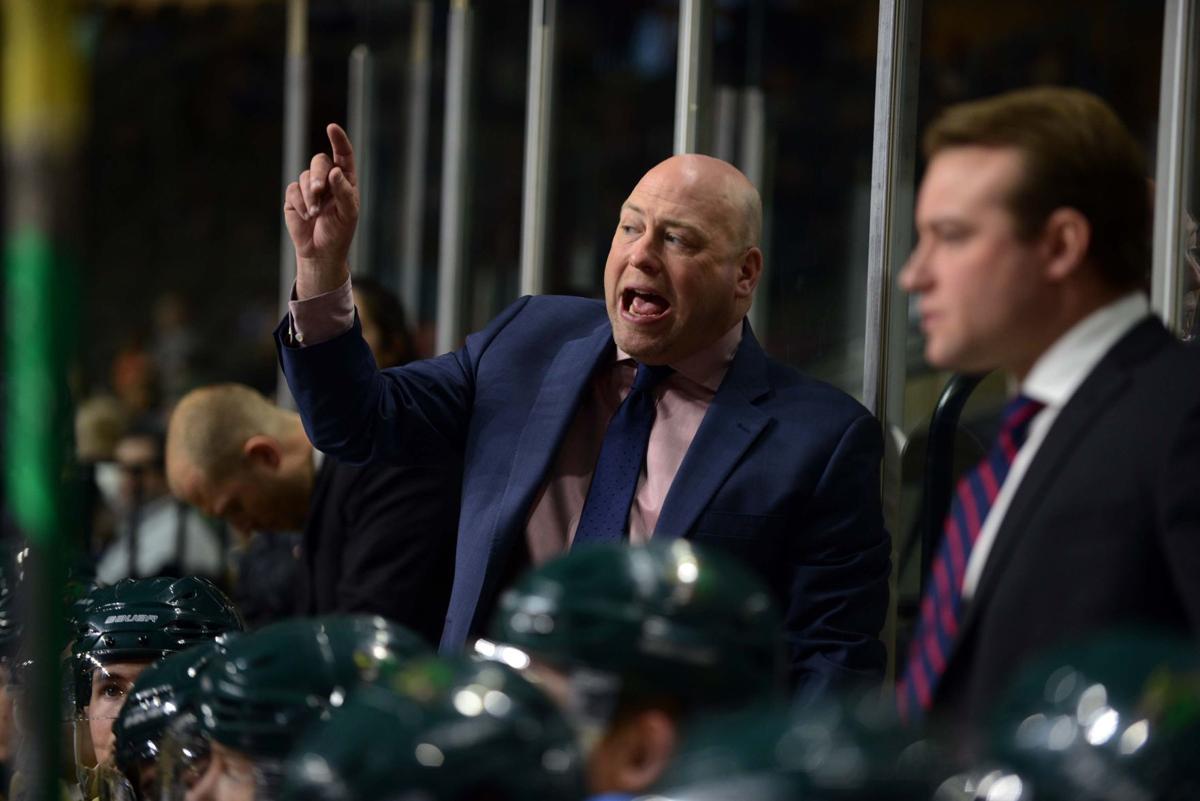 SIOUX CITY | There was a somber silence in the Sioux City Musketeers locker room.

A few minutes passed and then, Coach Luke Strand’s skaters took part in the traditional Sunday night post-game skate with fans, but the feeling wasn’t as joyful as past times. Perhaps the feeling of disbelief was the reason, losing a lead and then dropping a marathon shootout where the winning team missed 13 chances.

The Musketeers took a 2-0 lead deep into the third period against Tri-City, the Western Conference leaders. Filip Forsmark completed a rally with a game-tying goal with 1:27 left and teammate Asa Kinnear scored the game-winning goal in the shootout as the Storm escaped the Tyson Events Center with a 3-2 United States Hockey League victory.

“I think obviously, it’s a hockey unfortunately when you can’t put off the gas,” said Strand, as players slowly went on the ice to accompany the estimated 100 fans who had already started skating on the rink.

“Tri-City has been very good. We had mental errors and physical errors. But at the same time, there’s a lot of response to the performance that was good, individually and as a team.”

Sioux City (18-12-6) had its largest lead in three games when Aaron Grounds, who had been scoreless in his previous nine games, tallied his third goal of the season with 13:13 left in the third period.

Grounds’ goal was set up by a takeaway from co-captain Matt Miller, who stole a pick off the skate of Tri-City’s Colton Kalezic while positioned behind the working space of Storm goaltender Jake Barczewski. Miller was credited for the assist along with Kevin Lombardi.

Sioux City goaltender Ben Kraws (16-9-5) entered the third period with a shutout for the sixth time this season. Kraws, who’s now 4-0-2 in those situations, lost his shutout when Ronnie Attard, third among USHL defensemen with 30 points (13 goals, 17 assists) scored with 6:48 left, assisted by Forsmark.

Attard returned the favor when he assisted on Forsmark’s goal. Tri-City (29-8-2), incidentally is tied with Des Moines and Waterloo for first in the league with 54 third-period goals.

Forsmark’s goal was of the power-play variety. It was one of two power-play chances for the Storm in the final 5 ½ minutes of regulation and Sioux City, on Tri-City’s first man-advantage situation missed two chances to get a 3-1 lead as Jordan Steinmetz and Martin Pospisil missed shorthanded opportunities.

Parker Ford, who assisted on Pospisil’s second-period power play goal, missed a scoring chance in overtime, when play is 3-on-3 rather than the traditional 5-on-5. Kraws had allowed a shootout goal from former Musketeer Connor McMenamin when the shootout started, but then stopped 13 straight shots.

“Kraws was dynamite,” said Strand. “After Friday (a 3-1 loss to Des Moines), I don’t think he was the happiest guy in the world, but that makes him the goalie he is and the competitor he is. We need to offer him more support. He was really good.”

It’s way too early for Anderson Cup discussion, the trophy that goes to the team with the USHL’s best regular-season record. Sporting 60 points, Tri-City, the team that has allowed the league’s fewest goals (90) has a three-point advantage over Eastern Conference leader Muskegon (27-8-3), the team that invades the Tyson Events Center for a 7:05 game Friday night.

Muskegon’s appearance continues the murderous schedule the Musketeers have been facing as of late. Tri-City’s win marked the fifth for a team a winning percentage of .600 or better to defeat Strand’s squad this month.

“Obviously the schedule has been and the travel has been tough,” said Strand. “But we’re here to play. We’re here to win. Once we get some (healthy) bodies, I think we’re closer than further. But at the same time, individual performance makes team outcome. We have to find ways to make ourselves better and individually, to make our team better.”

Allen's second half run leads to win over Pender

PENDER, Neb. -- The Allen High School football team went on a 24-0 scoring run in the second half that helped the Eagles move to 4-0 Friday ni…

June has scored 10 of the Panthers' 15 offensive touchdowns this season -- nine rushing and one receiving -- and his 695 yards on 97 carries makes for a 7.2 yards per carry average.

Sioux City East's Terrick Thompson makes the most of his opportunities

SIOUX CITY — In just one half, East High School senior Terrick Thompson doubled his stats on the season.