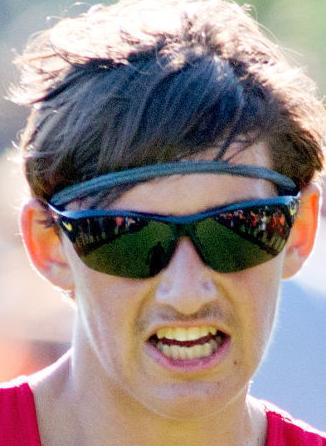 The Stars didn’t necessarily want to prove anyone else outside of their team wrong — they just wanted to prove themselves right.

North scored a MRAC-record 24 points to win the conference meet. It is the second consecutive year that the Stars have broken the team total — they had 26 last year — and it’s also the second straight time that Jaysen Bouwers is the individual champion.

Bouwers led the pack with a winning time of 15 minutes, 46 seconds, and Stars sophomore Will Lohr was the runner-up, as he finished 27 seconds behind the No. 3 ranked runner in Class 4A by IowaRunJumpThrow.com.

Bouwers led wire-to-wire, using his long stride to carry him through the 5,000-meter course.

“I tried to get a flow moving after these last couple weeks with all the meets being canceled,” Bouwers said. “I tried to go as fast as I could, really. I tried to help my teammates run as fast as they can as well.”

The next two Stars to cross the finish line were both freshmen. Beshanena Gutema was fourth (16:39) and Gabe Nash was 11 seconds behind Gutema.

The only non-North runner in the top-5 was Wimach Gilo of Council Bluffs Thomas Jefferson, who was third at 16:19.

North was scheduled to run at the South Sioux and Fort Dodge meets to prepare for the MRAC meet, but those two events were called off due to weather-related causes.

Bouwers tried to keep himself patient in the two-week window where the Stars didn’t have a meet. He pushed himself harder in practices, and asked his teammates to follow suit.

“I really wanted to run today, because we knew we were going to have a really fun time with the team,” Bouwers said. “Colin (Greenwell) is finally getting back in racing … just really getting a really good run in before next week. I think he’s going to do lots of damage, he’s starting to move again.”

Greenwell finished 12th Thursday after suffering a foot injury earlier this season at a meet in Pella.

With the win, the Stars believe they can among the three best teams in Class 4A.

“We’re ready for something special,” North coach Abdier Marrero said. “We’ve been gearing up for this. Everything we’ve been doing is for the sake of confidence building.”

North is ranked fourth in the 4A team standings behind Dubuque Hempstead, West Des Moines Dowling and Johnston. The Dragons finished third in their conference meet on Thursday.

Le Mars junior Jason Sudtelgte was the only other local runner to finish in the top-10. He was ninth in 17:06.

C.B. Jefferson was second in the team standings at 66 points, Le Mars was third at 76.

Downs knew she could run the hills at Prairie Rose better than the Crusaders senior.

That gave Downs the advantage, as she was the conference individual champion with a 19-minute-flat performance. Aesoph trailed by 15 seconds.

The Black Raiders ran earlier in the season in Brunsville, and learning about that course helped Downs build her strategy.

“I made sure to push it up the hills,” Downs said. “Usually, when we both run on a flat course together, we’re closer. On hills, I usually have a lead so I would have an advantage on this course because I can push harder on those hills.”

Downs also knew she went out a little faster in the MRAC meet held last year in Council Bluffs. She thought about how that race didn’t work out in her favor, so she took things more meticulously.

“I really wanted it this year,” said Downs with a huge smile on her face. “I took what was mine. I definitely took last year to heart. I’m really hard on myself. I know that Amber is a strong runner, but if we’re close at the end, usually I can edge her out. If she starts pushing at the middle of the race, I have to get in my head to make sure I stay with her. At the end, I know that I have the ability to keep going.”

After the race, both Downs and Aesoph hugged, shared congratulatory wishes and good luck wishes for next week’s district meet.

"That was a good race for me coming back from last week, and I decided I wasn't going to hang back at the beginning, because that hasn't worked out for me this season," Aesoph said.

Heelan won the team competition for the fifth straight year. The Crusaders scored 49 team points, ahead of East’s 51. North was third with 69.

The Bulldogs' top runner was senior Chloe Calhoun at 20:39.

Next up comes the district meet for every team.

MOVILLE, Iowa – Lindsie Graff picked a good time to have the best basketball game of her career.

Moseman graduated from Heelan in 1990 and was the team captain of the 1989 state runner-up football team. “It’s incredibly sweet to follow in the footsteps of the greatest coach in Sioux City history,” he said of his mentor, Roger Jansen.

IDA GROVE, Iowa -- Because of the weather, Woodbury Central's Beau Klingensmith had to go about a week without wrestling. So while he had a bu…

The Warriors started the season unranked, but they're now up to No. 7 in the iawrestle rankings and moved all the way to No. 4 in The Predicament rankings this past week. And they finished second in Ida Grove on Saturday.

IDA GROVE, Iowa -- Because of the weather, Woodbury Central's Beau Klingensmith had to go about a week without wrestling. So while he had a bu…