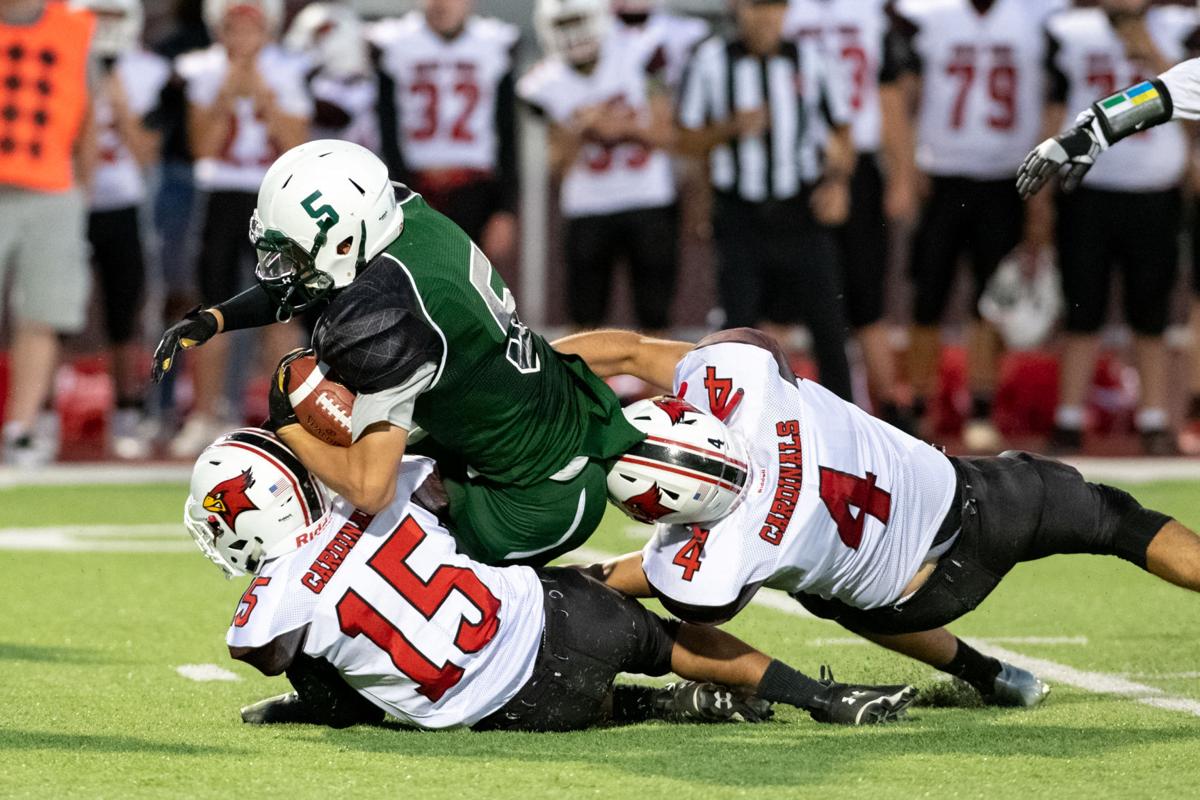 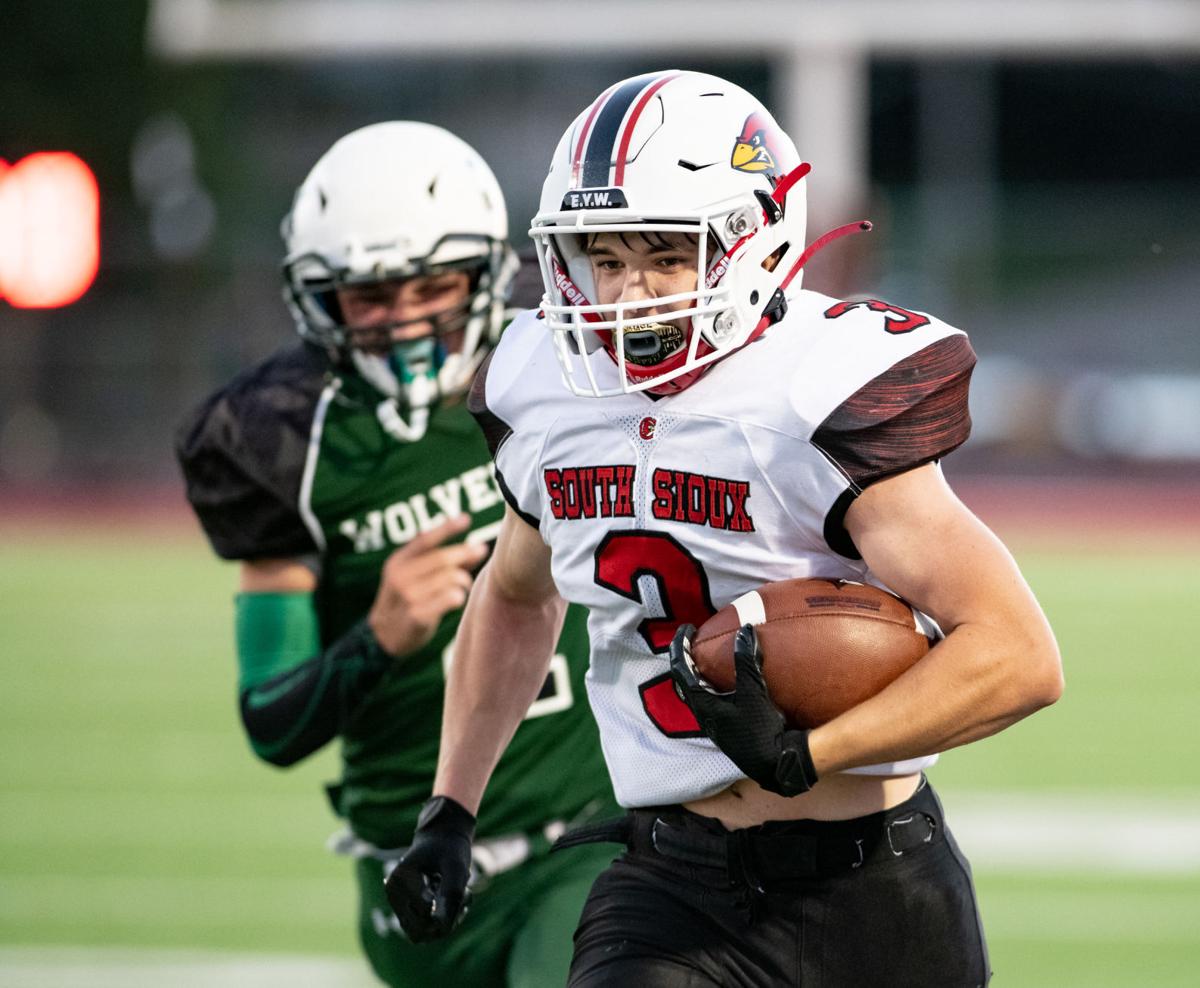 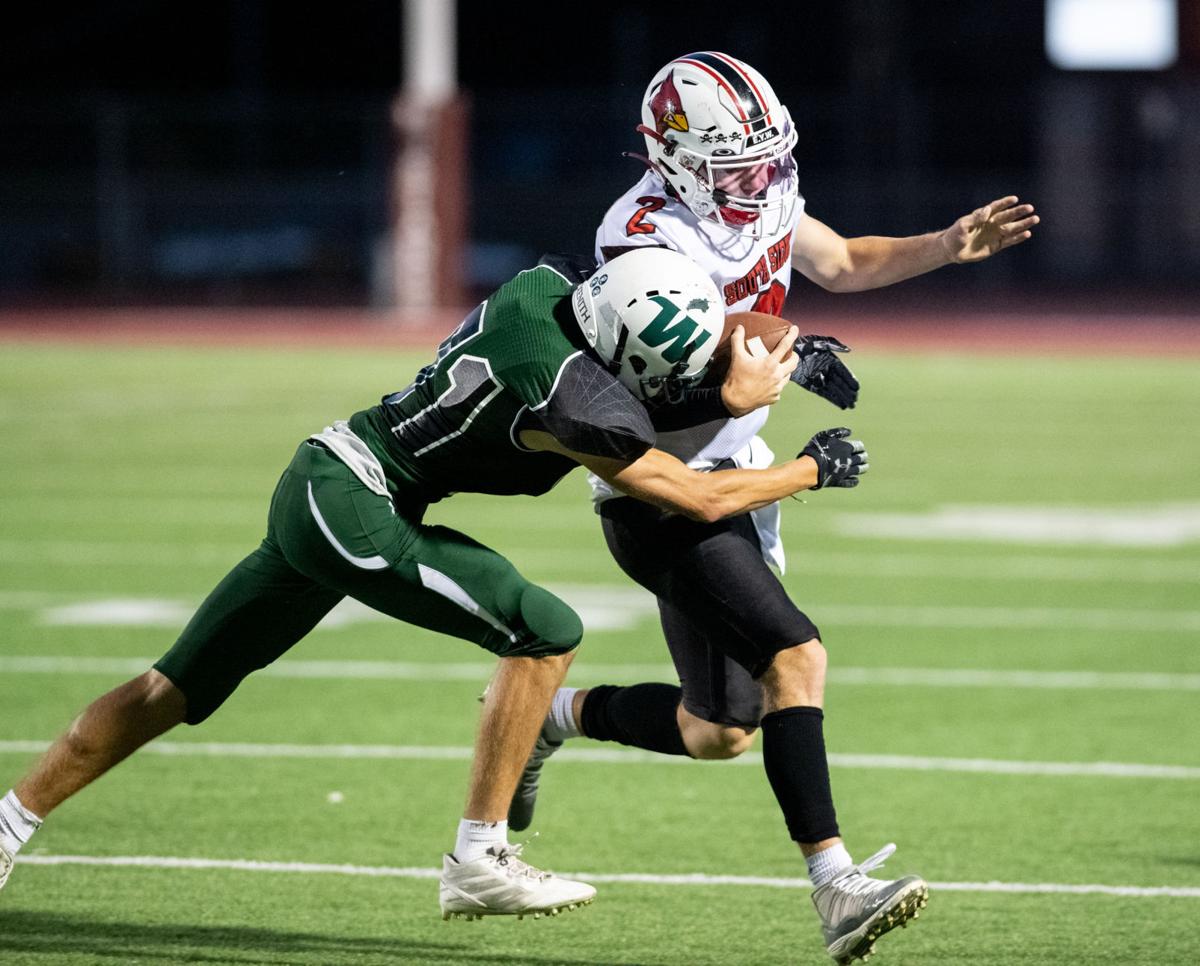 However, the Wolverines couldn’t finish any of the drives, going 0-for-3 in the red zone in the game.

While South Sioux wasn’t a whole lot better in West territory, the Cardinals still took advantage of half of their trips to the red zone, scoring touchdowns on three of their four trips inside the 20-yard line.

South Sioux built a 14-point cushion in the first half, one that the Wolverines, who did add a 70-yard scoring strike in the fourth quarter, couldn’t overcome.

A touchdown late in the fourth quarter allowed South Sioux to come away with the 20-7 victory on Thursday at Elwood Olsen Stadium.

The two teams traded punts to begin the game.

However, a holding call and back-to-back false starts moved the Wolverines all the way back to their own 37-yard line.

West got out of the second-and-40 hole, though, as Keenan Hegna hit Lamarion Mothershead for a 28-yard gain and then Mabior Akuien hauled in a 13-yard pass for the first down.

West drove to South Sioux’s 10, but a loss of one, a sack and an incomplete pass forced the Wolverines to try for a field goal at the 20-yard line.

The Cardinals drove to West’s 38-yard line but Kaleb French got a sack to force South Sioux to punt.

West drove to midfield but had to punt. The snap was mishandled and South Sioux took over at the West 37-yard line.

Even though the Cardinals started the drive with a false start, Connor Slaughter hit Devin Penne for a 22-yard gain and on the next play, Richard Stewart pulled in a pass along the sidelines and got a foot down in the end zone. South Sioux took an 8-0 lead with 10:46 left in the first half.

West attempted to answer after a good kickoff return by Koby Pearson, which put the ball at the South Sioux 43.

On the first play of the drive, Michael Duax hauled in a pass from Hegna for 30 yards to put West at the 13-yard line.

But a loss of one, an incomplete pass and a false start made it third-and-16. Hegna’s next pass was off the back of South Sioux’s Kaden Dahl and then the fourth down pass was incomplete.

The Wolverines forced a three-and-out but West fumbled on its first play and the Cardinals recovered, taking over at the West 37-yard line.

Caleb Kriens, who rushed for 215 yards in the win, broke free for a long run, appearing to get to the 5-yard line but he fumbled into the end zone and West recovered. There was a penalty but it was holding on South Sioux, allowing West to take over.

The Cardinals capitalized on their next opportunity, though. After a three-and-out by West, South Sioux took over on its own 42-yard line. On third-and-8, Slaughter hit Dahl on a crossing route and he went 23 yards.

Kriens followed with runs of 14 and 5 yards and capped off the drive with a 3-yard run to put South Sioux up 14-0 with 3:55 before the half, which was the halftime score.

The Cardinals started with the ball in the second half and drive to midfield but the drive ended when French picked off a pass.

A 13-yard run by Drew Benson made it fourth-and-3 and then Benson ran for four yards. Then on third-and-4, Benson ran for six yards. West drove into South Sioux territory and on fourth down, the Cardinals were called for pass interference, giving the Wolverines the ball at the 12-yard line.

But the drive stalled and on fourth-and-2, Benson was stopped for a loss of three.

South Sioux followed by driving to the West 42-yard line in four plays but West got another interception late in the third quarter.

This time West turned the interception into points. On third-and-17, Hegna got away from a couple of South Sioux defensemen and hit Duax in the middle of the field. Duax got past the first defender and made his way to the sideline and went 70 yards for the score as the Wolverines cut into the lead, 14-7 with 10:48 to play.

Kriens carried the Cardinals on the ensuing possession. As he rushed for more than 80 yards in in the series, getting South Sioux to the West 6-yard line.

But Kriens was stopped for no gain on first-and-goal and then Duax almost picked off Slaughter. The next snap was a bad one but Slaughter got it off and it was incomplete.

Another bad snap on fourth down was recovered by Slaughter but his pass was incomplete, giving West the ball with just over six minutes left, trailing by seven.

West went three-and-out and was forced to put with 5:26 remaining.

South Sioux then put the game away. Kriens opened with a run of 16 yards and then with the Cardinals facing fourth-and-4 at the West 17-yard line, Kriens got the four yards.

Two plays later, Slaughter rolled out and hit Penne for a 5-yard score with 1:32 remaining to make the final score 20-7.

There will be no shortage of wrestlers from Siouxland when Night of Conflict comes to The Arena this weekend: The boys card features four Northwest Iowa wrestlers, and the girls' lineup includes three across Northwest Iowa and Northeast Nebraska.

SIOUX CITY — It’s been a turnaround season for both the Sioux City North and Bishop Heelan volleyball teams this season.

Allen's second half run leads to win over Pender

PENDER, Neb. -- The Allen High School football team went on a 24-0 scoring run in the second half that helped the Eagles move to 4-0 Friday ni…