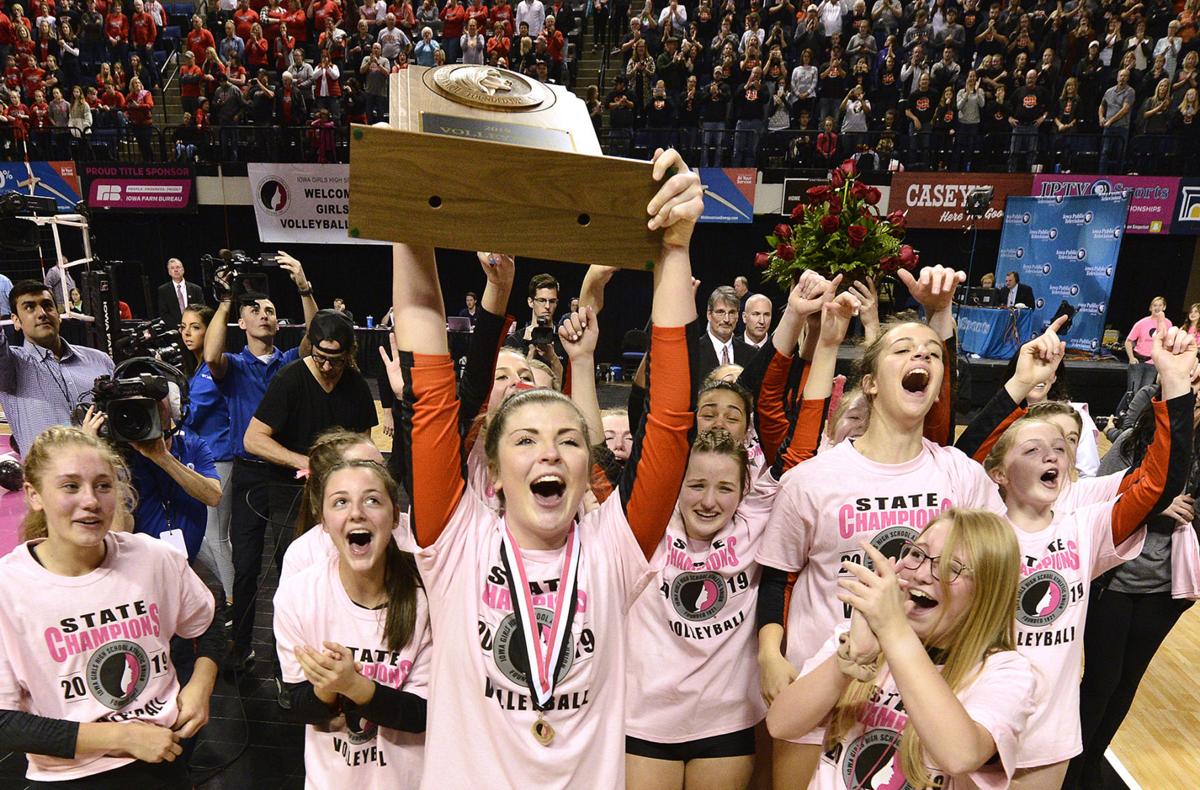 Senior Kenzie Foley holds the championship trophy up towards Sergeant Bluff-Luton fans as the team celebrates beating Western Dubuque in three sets for the Class 4A state tournament title. 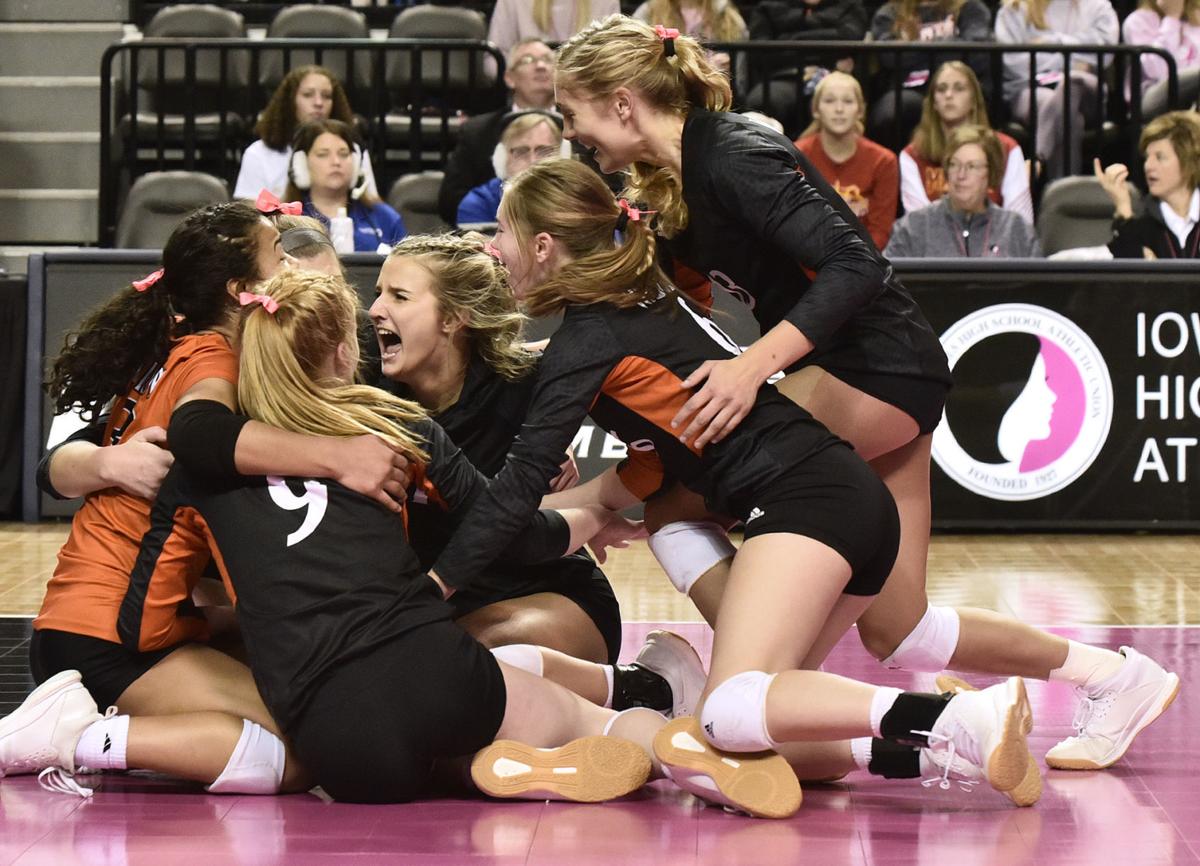 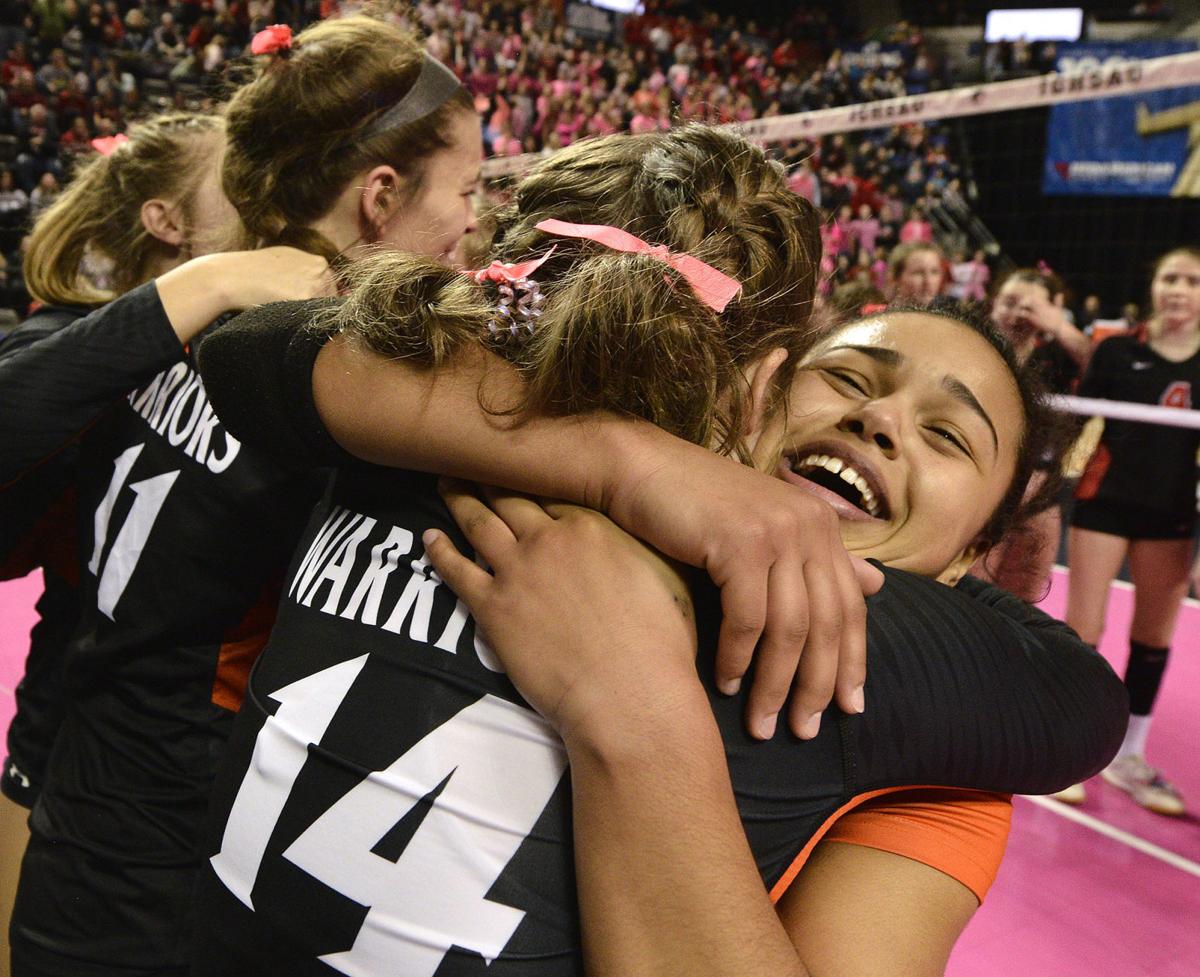 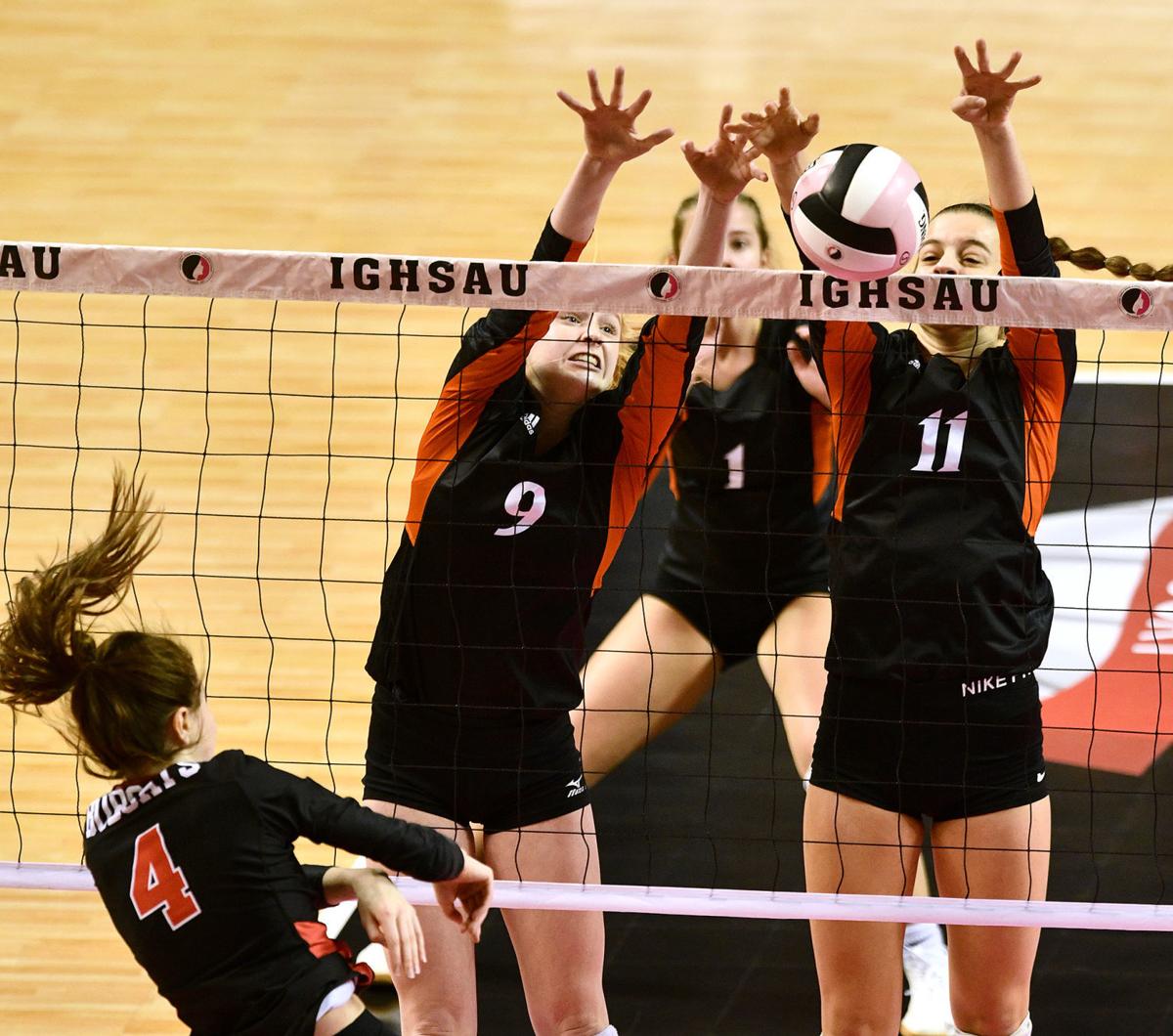 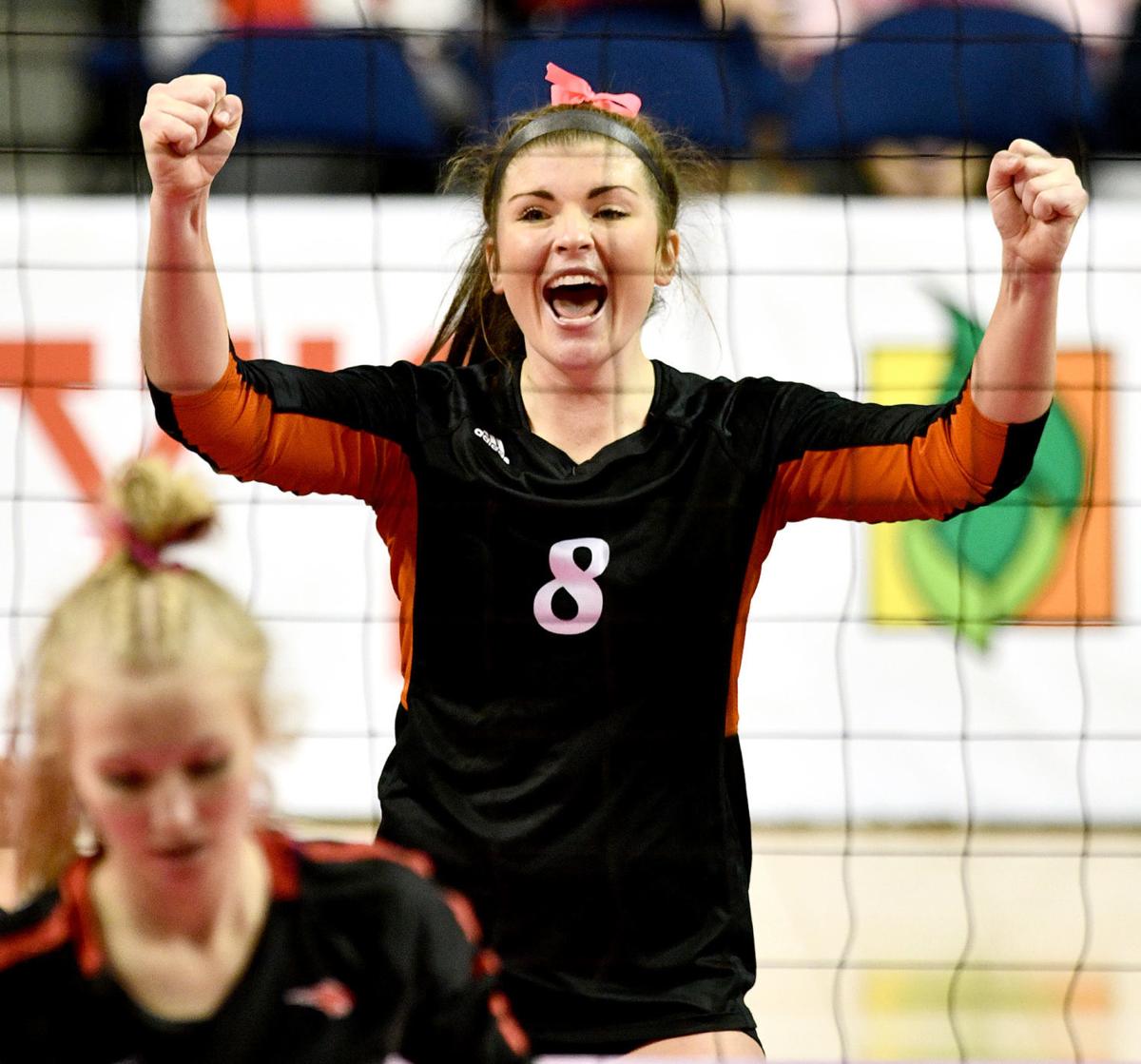 CEDAR RAPIDS, Iowa — Sergeant Bluff-Luton came into the Class 4A state tournament as the top seed.

While there were some jitters here and there early, the Warriors had the look and the feel of a state title team in the first two state tournament matches.

On the other hand, Western Dubuque was the surprise team at state.

In the championship match, Sergeant Bluff-Luton didn't let the young upstart team get to them and continued to look like the top team in 4A, ended Western Dubuque’s surprising run in impressive fashion.

After a tight first set, the Warriors took full control in the second and third sets as Sergeant Bluff-Luton claimed its first-ever volleyball title with a 25-20, 25-14, 25-18 sweep.

“Amazing. All four years we’ve been wishing and hoping for this and now it’s finally true,” said SB-L senior Elle Sneller, who was a member of the all-tournament team. “It doesn’t feel real, it feels like I am in a dream. I wouldn’t have wanted to end my senior year any other way. We wanted to go out with a bang and we definitely did.”

While the pressure of being the top seed can be a bit overbearing, the Warriors embraced it and used it to help them win the state title.

“I feel like this team plays better under pressure,” SB-L senior Kenzie Foley said. “I feel like we liked being ranked first just because it gives us momentum even though there is a target on our back and we get everyone’s best game.

“We will play our best game because we will have that pressure on us.”

It’s the third straight season the Warriors have been in the final four in 4A and the second time in the last three seasons, SB-L has played for the title. Sergeant Bluff-Luton lost to Dubuque Wahlert in the title match in 2017 and lost to Wahlert in the semifinals last season.

The Warriors lost some key seniors from last season’s team but SB-L coach Renee Winkel thought from day one that the team had the potential to compete for a state championship.

The team just needed some time to mature with the mix of seniors and underclassmen that she had.

“They are so athletic and they were so unfocused to start the year,” Winkel said. “Our biggest struggle was getting that sophomore class to mature, as fast as you can get a teenager to mature in three months. That’s where the team bonding and senior leadership stepped in.

“We had to work together as coaches to really get that mesh and gel together and once we did that, we were unstoppable.”

The team finally started to click at the Waukee tournament in late September and the Warriors haven’t let up since, leading to the program’s first-ever state title.

"Having such a young team, they were still getting used what coach was like," Sneller said. "We had to be really good seniors and lead them into what high school volleyball was like. I think our chemistry is what held us together. This is the tightest group of girls I've ever been involved with and that was really portrayed on the court and that is what led to our victory today."

The Warriors threw Western Dubuque off its offense early with constant quality serves. That continued throughout the match as the Bobcats only hit .074 because a number of times they had trouble getting off a quality first pass.

SB-L finished with 10 aces in the match. Allyson Hertz and Mia Gamet each had three, Madison Wilcoxon had two including one to start the match and Emma Salker and Alivia Wolf each had one.

“Volleyball is a game of serve and pass. If you can’t serve and pass, it doesn’t matter what else you can do,” Winkel said. “That’s absolutely huge. We work on pressure serving in practices and to step up and perform like that on a huge stage is awesome.”

Offensively, the Warriors were led by Foley this week, just like they have been all season. She had 20 kills in the championship match on .390 hitting. She finished the tournament with 67 kills and was named the 4A all-tournament team captain.

“Honestly, my whole team was like ‘you got it, it’s you’ and then they announced it,” Foley said. “That’s a dream come true, too. Everyone looks up to me on the team. Elle looks up to me, I look up to her. If either of us are struggling, we’ve got each other’s backs on the floor. It’s really great to see both of us on there.”

The first set with Western Dubuque was tight with the Bobcats taking a 19-18 lead late. A serving error by the Bobcats tied the set and then Foley put down three kills during a 5-1 run, which turned into a 7-1 run after Hertz had back-to-back aces to end the set, 25-20.

Sneller was second on the team with 11 kills as SB-L hit .222. Wilcoxon had 18 assists and Maddie Hinkel added 13. Mia Gamet had 20 digs and Foley added 13. Emma Salker had two solo blocks and two block assists and Regina Rogers had two blocks.

It was the final match for four seniors — Hertz, Sneller, Foley and Rogers — and each one had key plays during the match to give the Warriors control.

Winkel has leaned on all four this season and she knew all four would step up to the occasion on Friday.

“I knew they could and I knew they would,” Winkel said. “They’ve all taken different routes to get to this point. They’ve all done the jobs we’ve asked them to do at Sergeant Bluff. To see them perform on the biggest stage is satisfying.”

Sergeant Bluff-Luton knew the 2019 volleyball team was special, despite holes to fill

Not only did SB-L qualify for state, the Warriors go in as the top-ranked team in Class 4A with a 34-3 record. “I knew the potential was there and it would be up to them,” coach Renee Winkel said.

For Foley, she had one goal and that was to help Sergeant Bluff-Luton win at least one state title. On Friday, she accomplished that goal.

“I am just so excited. I’ve made it clear from the beginning that I am definitely going to win a state title,” the St. Cloud State recruit said. “We all wanted it more than anything.”

ROAD TO THE TITLE

What sports stories moved Journal readers most this year? Look back with us.

See how the Wolfpack and Warriors fared in their semifinal contests at the state tournament in Cedar Rapids.

SB-L heads to the championship match for the second time — it was the 4A runner-up in 2017 — and faces No. 10 Western Dubuque at 12:15 Friday afternoon. The young Bobcats ousted No. 8 Marion in four sets Thursday.

Join us as we commiserate restaurants, bars and more that have gone out of business. Have a favorite that isn't on the list? Email us here.

Though Sneller is hitting for a better percentage and has dozens more blocks this season compared to last, Warriors coach Renee Winkel said her leadership is a key reason why the Warriors are 34-3 and making a third consecutive trip to state.

METRO ATHLETE OF THE WEEK: Sergeant Bluff-Luton's Kenzie Foley has a love for volleyball

Foley said she wants to win a state title before she graduates. The Warriors are ranked No. 3 in Class 4A and reached at least the state semifinals each of the last two years. "Two of my three years with being that close, you see what it could be like," she said.

“When you pass the ball as much as we do, obviously you aren’t going to complete every single one,” said quarterback Cooper DeJean, who had more than 400 passing yards, four passing touchdowns and one rushing score. “We just had to adjust.”

Go back through the decade and celebrate some of Northwest Iowa's finest volleyball teams.

Former Bishop Heelan coach Mary Miller took the reins this season and has helped guide the Panthers to a 31-3 record, a resume that includes a win over Sioux Falls Christian, the defending A state champions.

SCJ VOLLEYBALL PLAYER OF THE YEAR: Kenzie Foley steps up to help Sergeant Bluff-Luton to title

"Last year in the (state) semifinals, I didn't do as hot and I was a leader then as well," Foley said. "I felt it was my fault." This year: She was the best player on the floor for the state champion Warriors.

JOURNAL VOLLEYBALL COACH OF THE YEAR: Sergeant Bluff-Luton coach Renee Winkel gets her team a title

The Warriors went through their fair share of disappointing results at the state tournament during Winkel's first four seasons, including a runner-up finish three seasons ago. But this season, there was no shred of disappointment.

Senior Kenzie Foley holds the championship trophy up towards Sergeant Bluff-Luton fans as the team celebrates beating Western Dubuque in three sets for the Class 4A state tournament title.