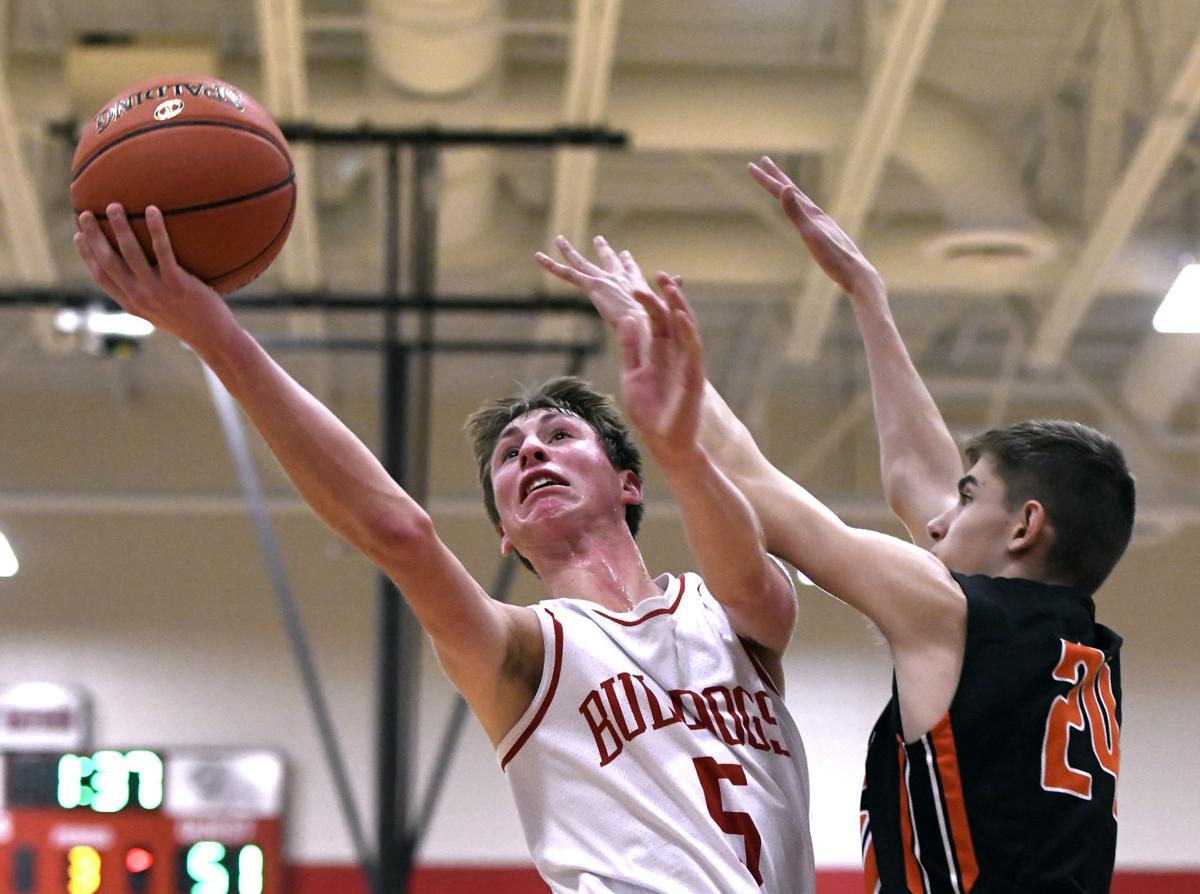 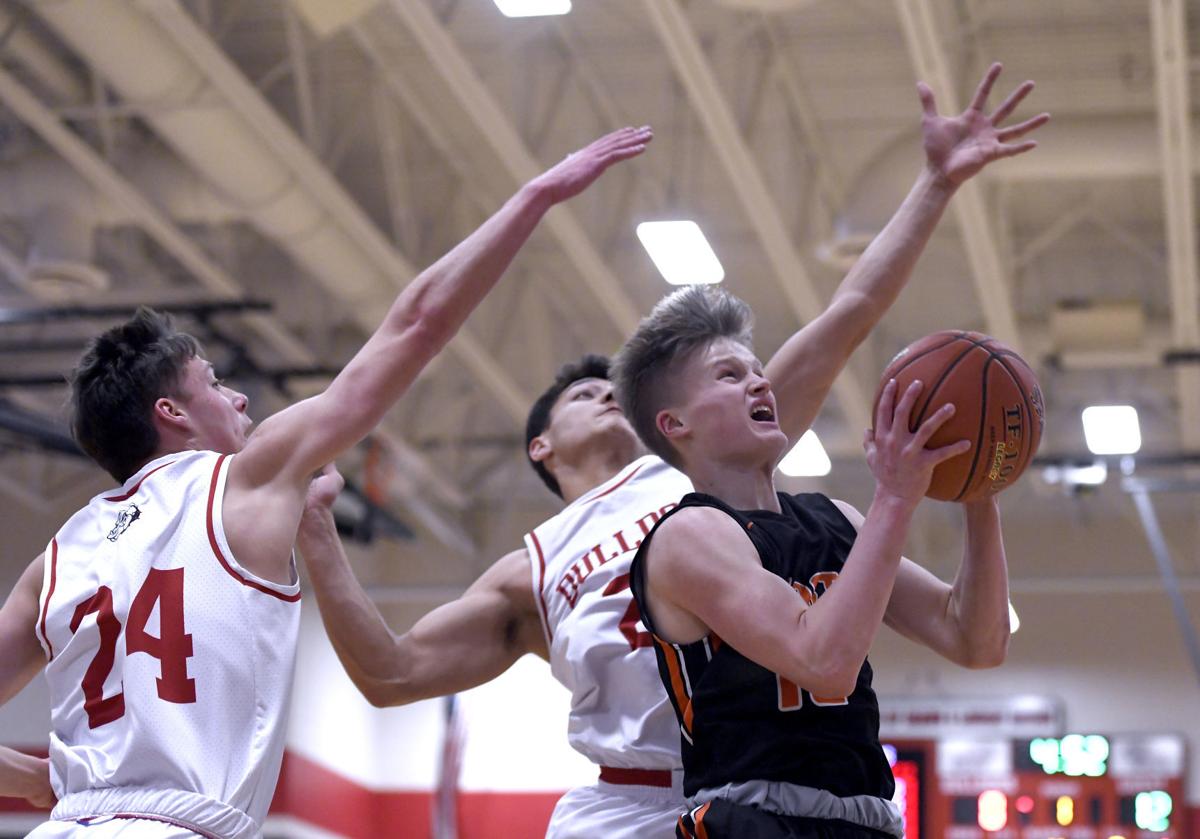 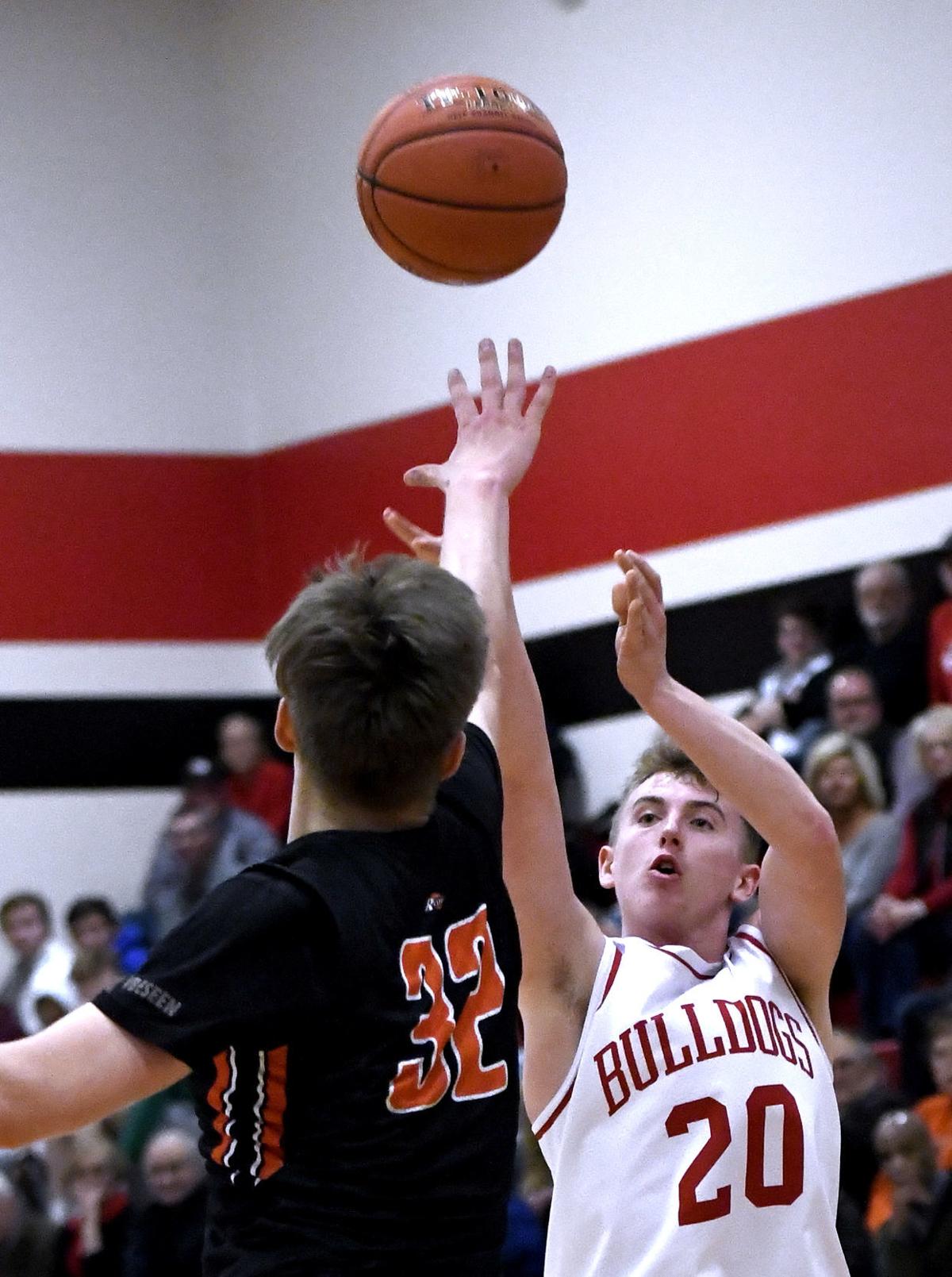 Le MARS, Iowa — Alec Dreckman had the performance of a lifetime, but it wasn’t enough for the Le Mars boys basketball team here Tuesday night.

The 6-foot junior poured in a school-record 51 points, but Sioux City East was able to overcome the onslaught for a 75-72 Missouri River Conference victory.

Dreckman made 16 of 22 shots -- from all over the floor and many under intense defensive pressure. He was 5-for-9 from beyond the 3-point arc and 14 of 16 from the free throw line.

The 51 points eclipsed a long-standing school mark of 44 points set by Bob Pearson in 1965. 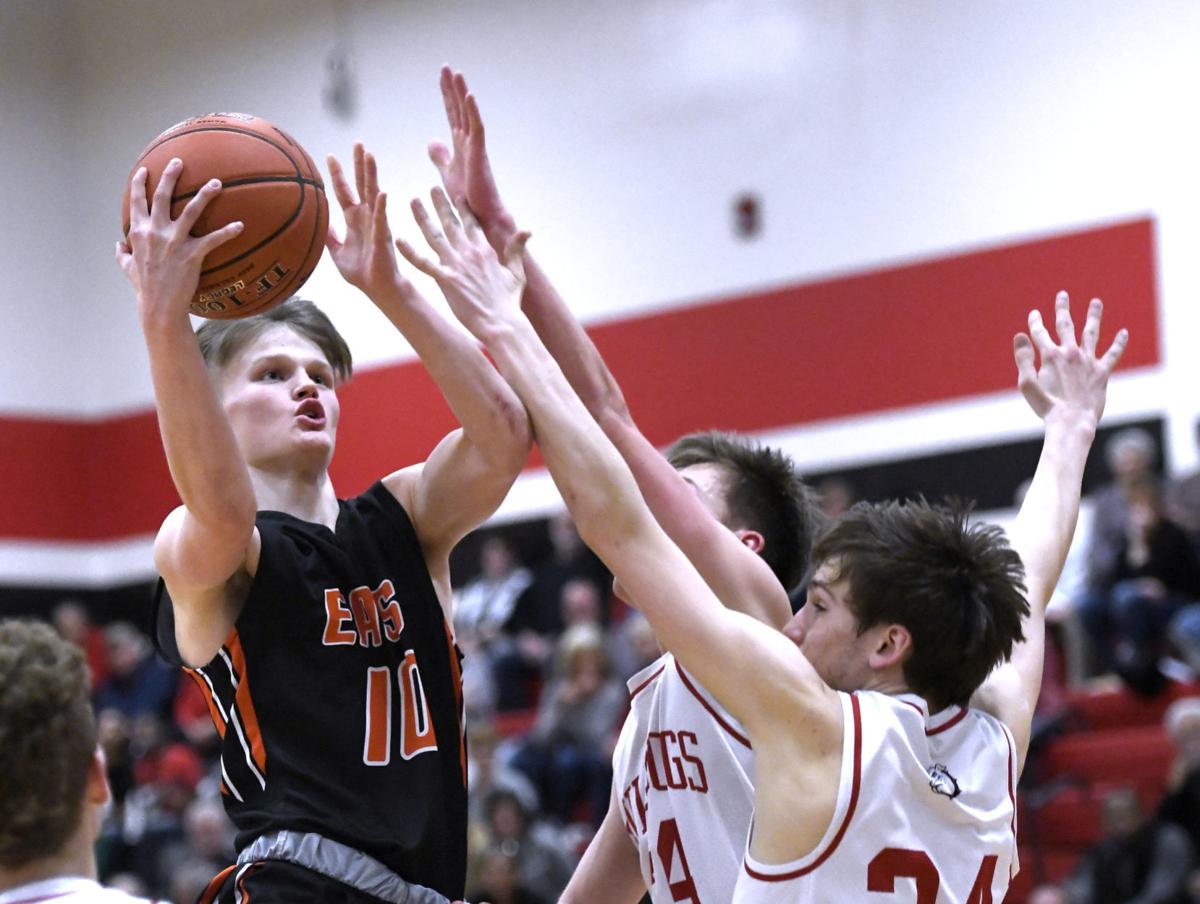 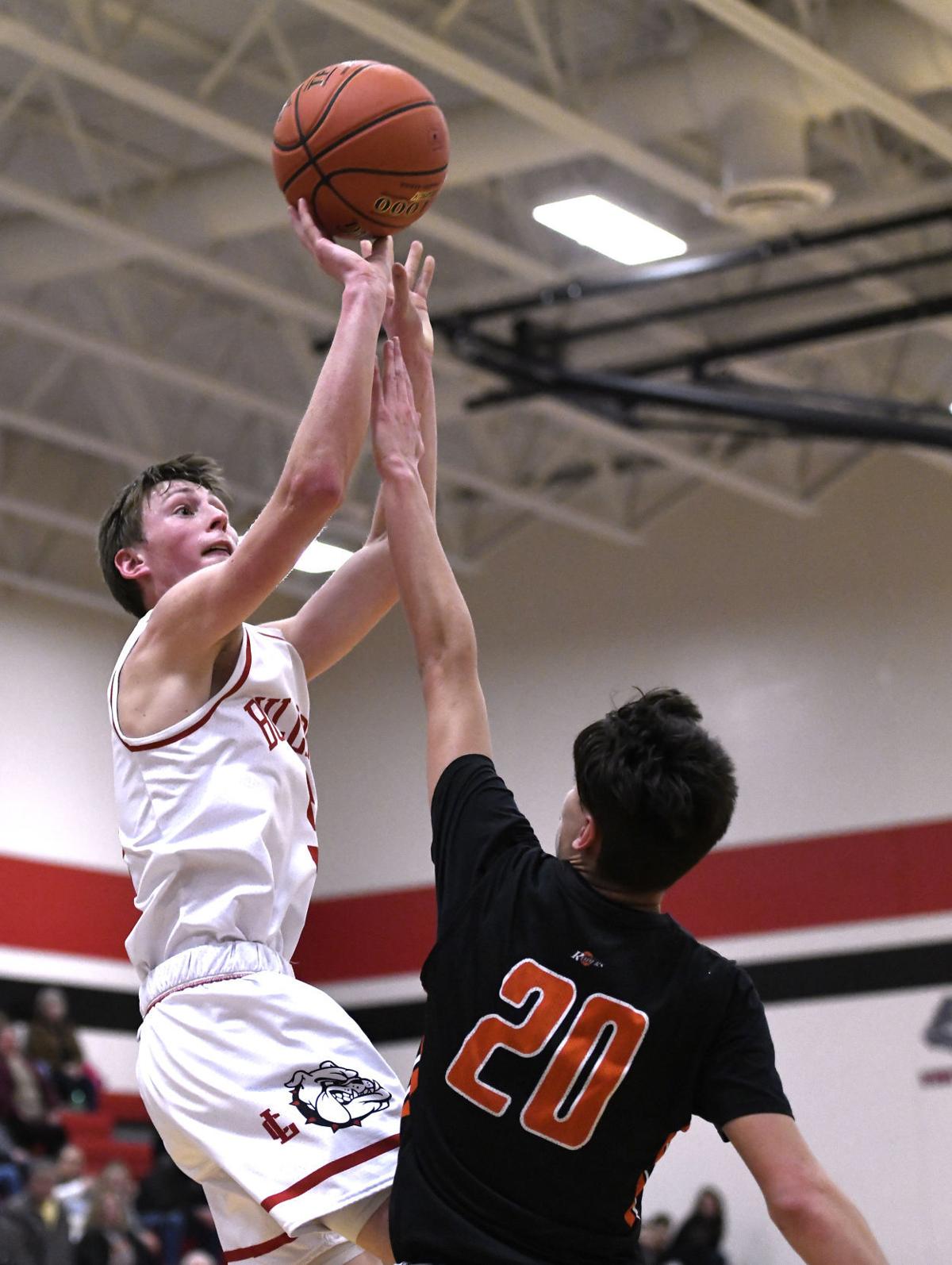 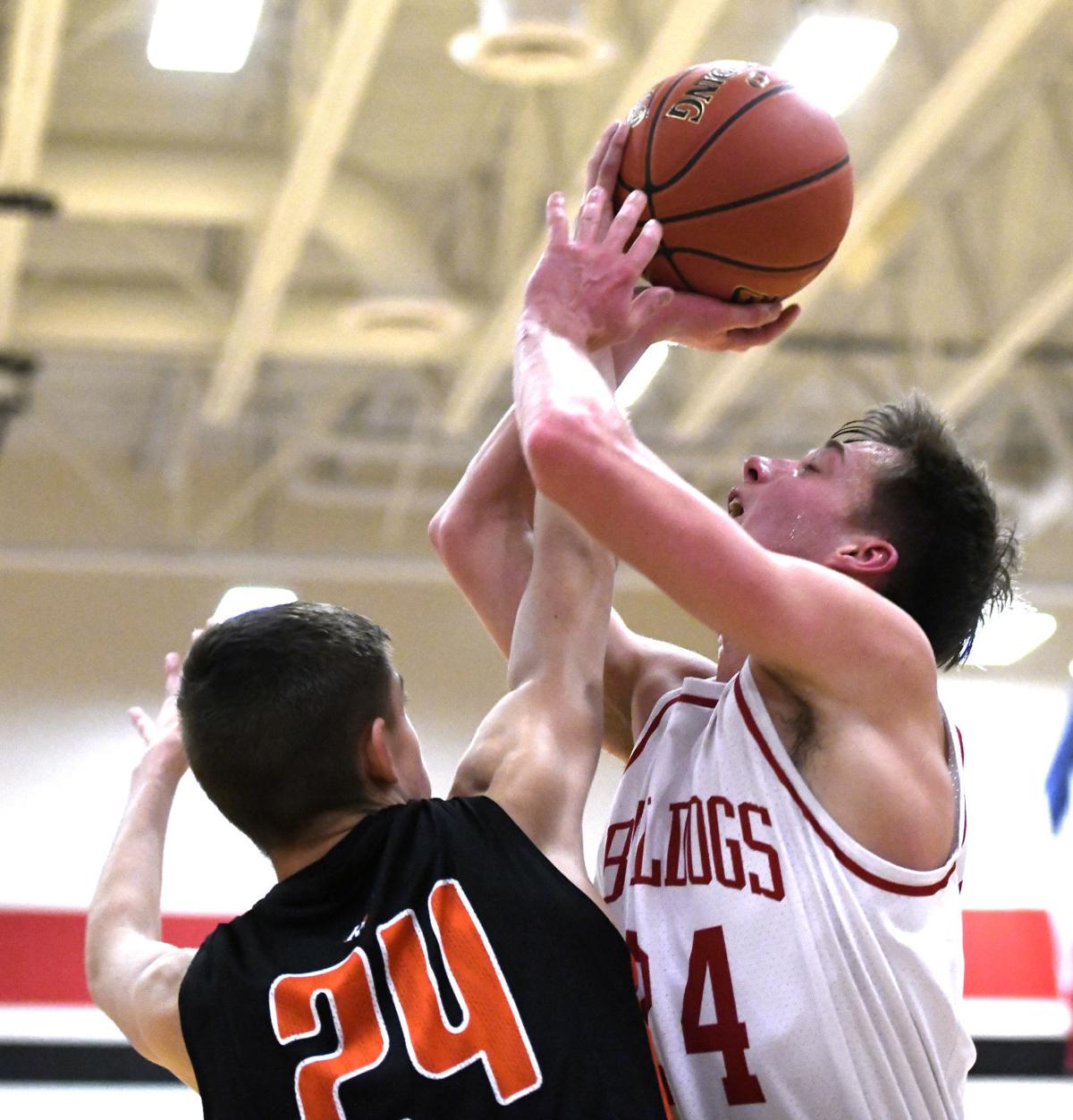 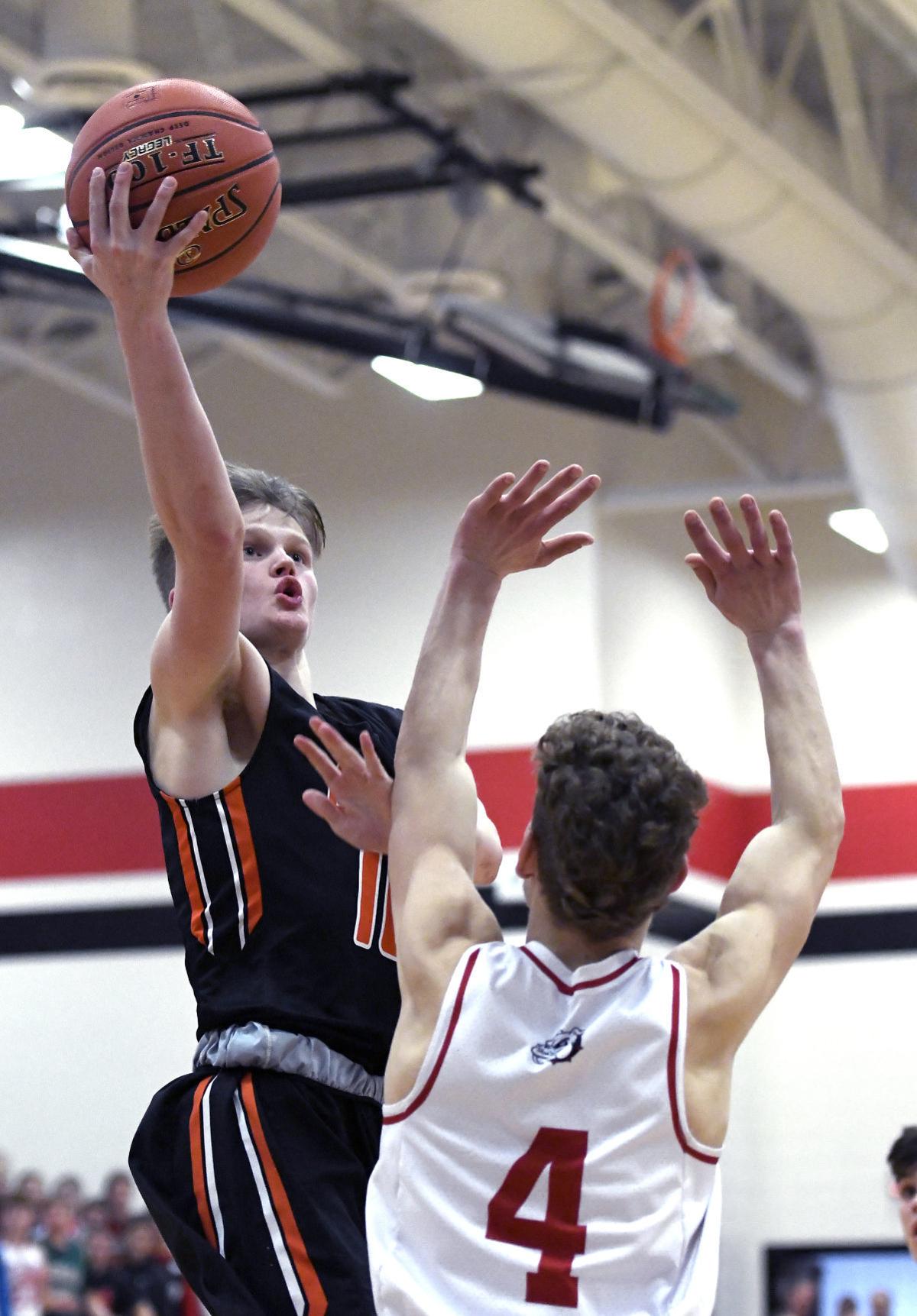 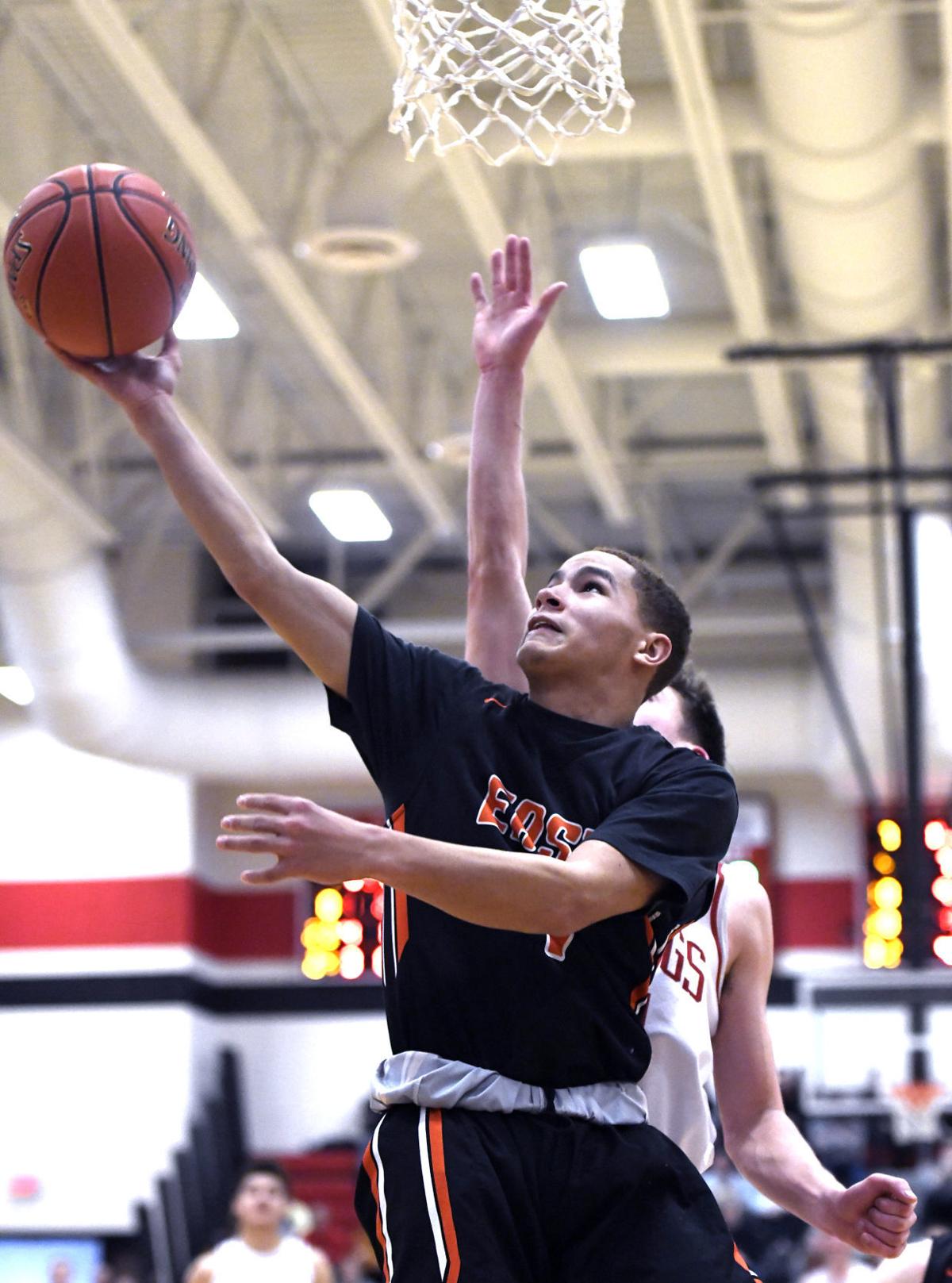 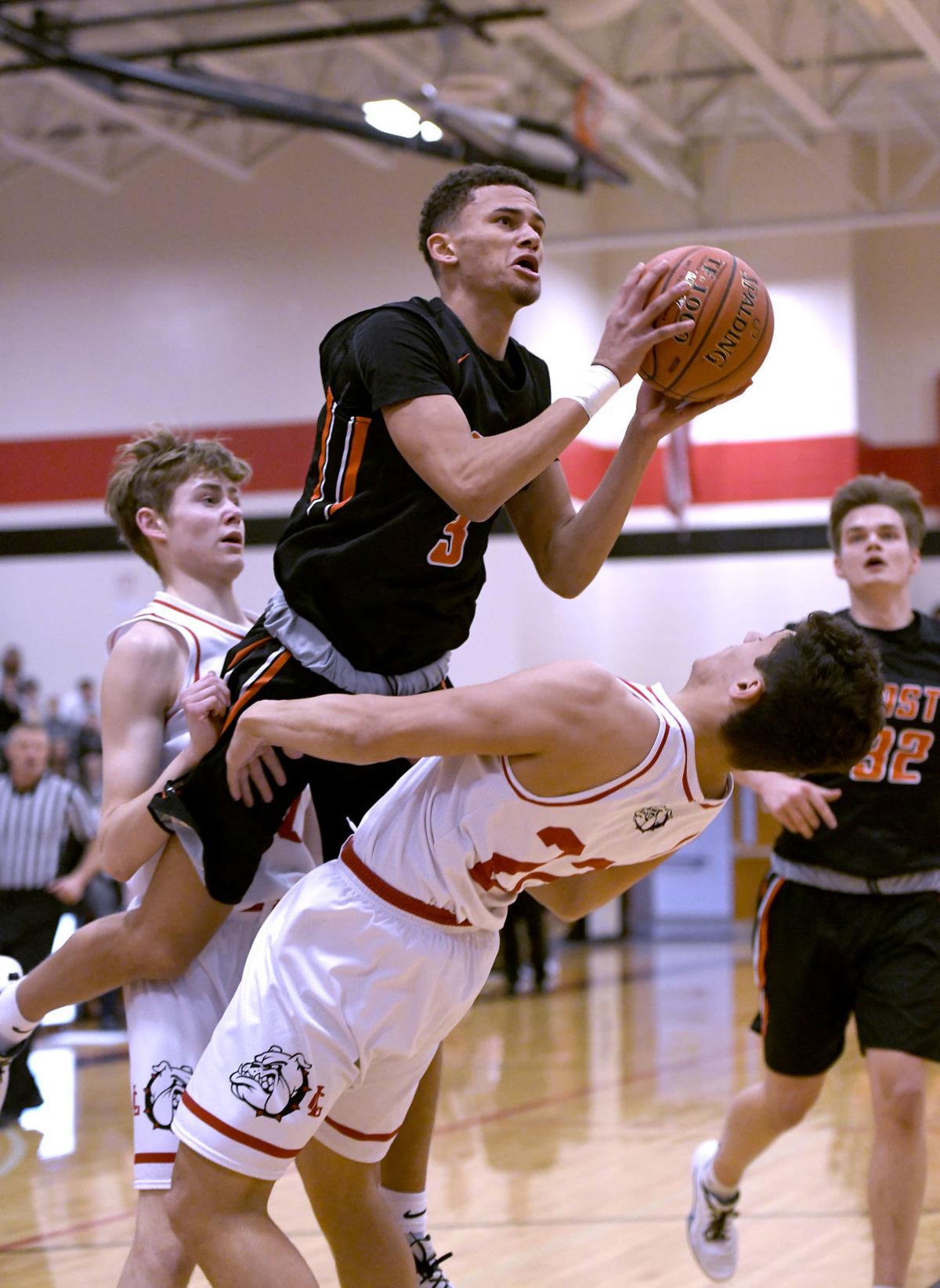 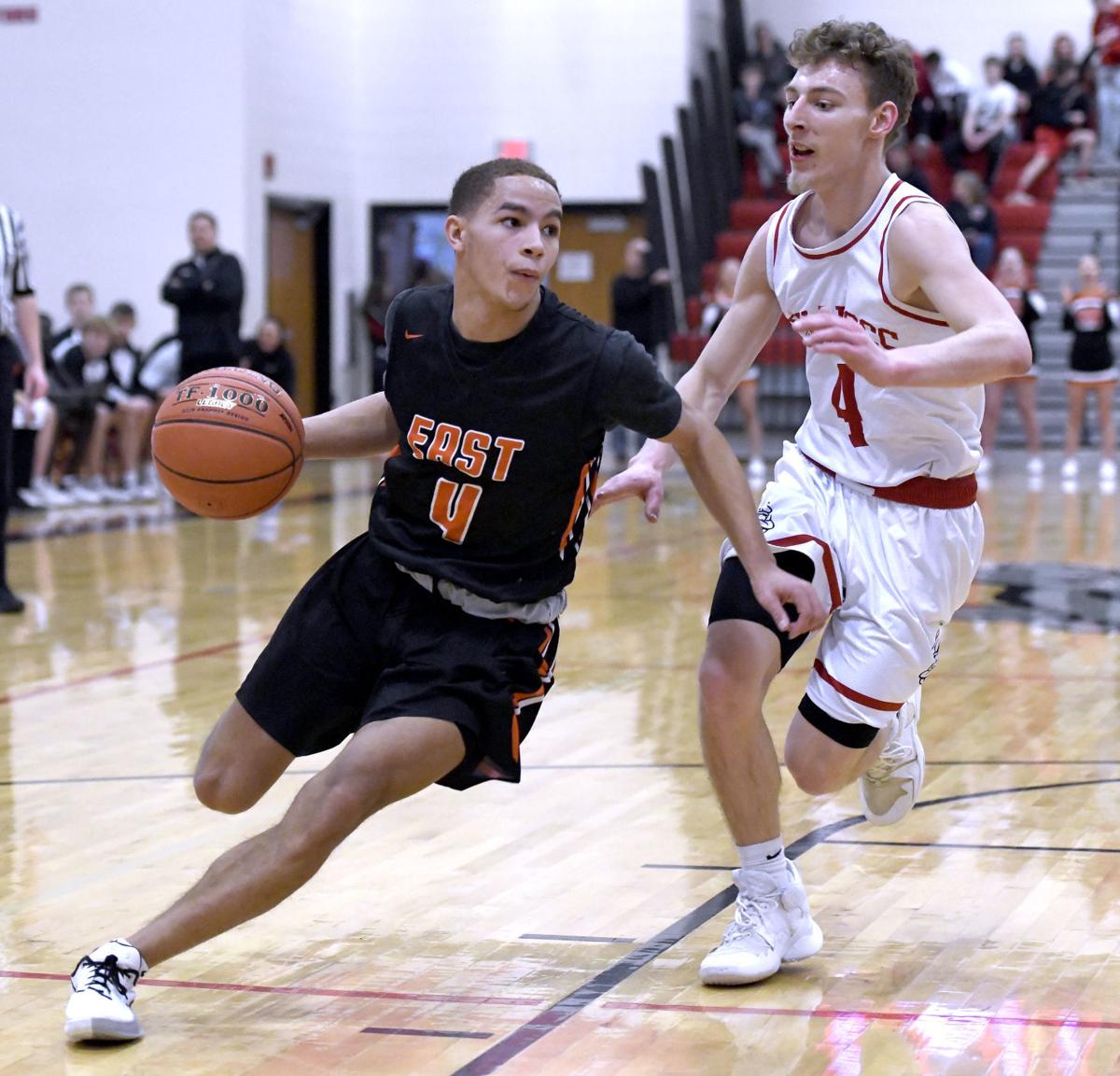 East, though, was able to come out on top when Jaleque Dunson prevented Dreckman from getting off a potential game-tying 3-pointer as the buzzer sounded.

Dunson, who scored 20 points for the Black Raiders, moved underneath Dreckman as he maneuvered for a shot, knocking the ball out of his hands.

Le Mars (13-6, 8-4) trimmed a 26-9 deficit at the end of the first quarter to 38-33 at halftime. The Bulldogs never led, but forced East to make plays at both ends of the floor to preserve the victory.

“Le Mars is a good team, we knew they were very good at home and to give a guy 51 points, that’s incredible,” East coach Ras Vanderloo said. “We can score and when we bring energy like the first quarter defensively, we’re good. We get a little tired and it slips away a little bit but overall, we’re taking it, I know that.”

East’s dynamic back court of Sayvion Armstrong (22 points) and Dunson (20) combined for 42 points and senior Aden Gomez was also in double figures with 11 points.

Dreckman, though, simply couldn’t be denied, much to the delight of the always energetic Le Mars student section, who chanted ‘MVP’ late in the contest.

METRO ATHLETE OF THE WEEK: West's Marcus McCray bounces back from shoulder surgery

Le Mars outscored East 24-12 in the second quarter to make it a game, then stayed close throughout. The Black Raiders, however, had an answer each time Le Mars threatened to take the lead.

East took a 54-46 lead into the fourth quarter and it turned into a free throw shooting contest in the fourth.

Le Mars was 11-for-13 from the stripe in the final eight minutes while East strolled to the line 19 times, converting 12.

“When you’re down 16 to start and not even at the halfway point of the first quarter things could have gotten out of hand in a hurry,” Le Mars coach Dave Irwin said. “Our guys battled but you can’t spot a really good team a 16-point lead. We probably outplayed them for three quarters but the first quarter killed us.

“But I’m pleased with how we showed a little bit of resilience. It’s tough to take when you have a kid that has a pretty special night like that and not be able to come up with a win. What’s equally impressive is that they were able to withstand it.”

Dreckman simply couldn’t be stopped, whether it was firing from the perimeter or taking it to the basket. He had 30 points by the end of the third quarter and erupted for 21 in the fourth, making five of six shots and all 10 of his free throws.

“I don’t know how you were going to guard that because he was making shots from behind the line, he was attacking and pulling up, he was getting to the rim and getting to the line,” Irwin said. “That was a pretty complete game as far as scoring goes when you do just about everything possible on the offensive end.”

Dunson scored 12 points in the first quarter and got the Black Raiders off and running. Armstrong tallied 10 of his team-high 22 in the second quarter.

A key sequence for East in the fourth quarter came with 3:55 left when 6-foot-7 freshman Brandt Van Dyke canned a 3-pointer just seconds after one by Dreckman, pushing the lead to 62-55.

Le Mars still trailed by eight points with 28 seconds remaining but had the ball with a chance to tie at the end.

Trailing 75-70, Tate Westhoff put in a rebound shot and was fouled with four seconds remaining. Westhoff missed the free throw but the Bulldogs were awarded possession after a battle for the rebound.

They got the ball in the hands of Dreckman, but Dunson came up with an outstanding defensive play to end it.

What are the chances two Siouxland athletes have a career night on the same night? It happened on Tuesday night and the Journal sports staff b…

Dunson is averaging 19.3 points per game, the seventh-best in Class 4A. "He's our go-to guy, it's not a secret," coach Ras Vanderloo said.

The Missouri River Conference rivals had split two-point games this season. The Bulldogs' 47-44 victory sends them to a region semifinal at Carroll.

A week after losing to Sioux City East by 50 points, the Bulldogs responded to beat Bishop Heelan 73-54 in their postseason opener.