PHOTOS: Class 1A and 2A state baseball semifinals 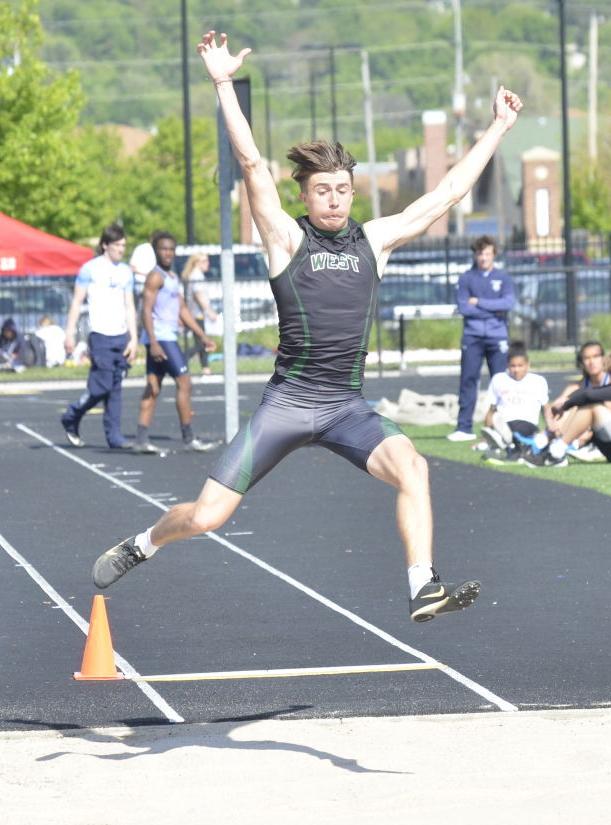 Michael Duax of Sioux City West competes in the long jump on Thursday at the Class 4A-2 state qualifying meet in Council Bluffs. Duax jumped 20 feet, 8.75 inches, to come in first place. 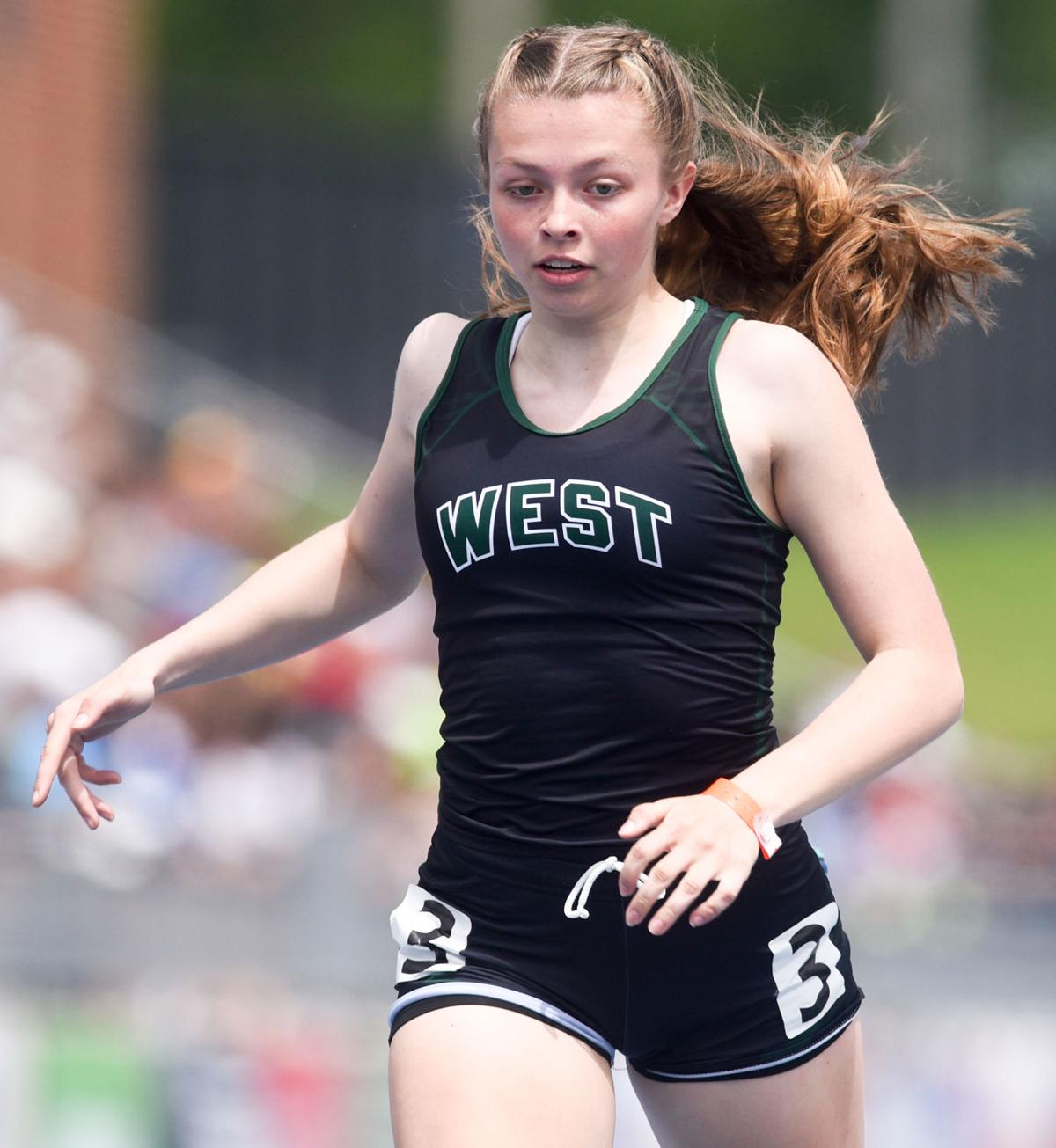 After Thursday’s state qualifier in Council Bluffs, they will have plenty to do.

Holly Duax, a junior at Sioux City West, will make her second straight appearance at state after qualifying in the sprint medley relay, the 100 meter dash, 200 meter dash and 4x100 meter relay.

Holly Duax’s brother, Michael Duax, is also headed to state after winning the long jump and 400 meter dash, placing second in the 100 meter dash, and third in the 200. After several frustrating years filled with close calls, and a junior season canceled due to COVID-19, the elder Duax is headed to the state meet for the first time.

“It feels great,” Michael Duax said. “I put in a lot of work last year and didn’t get to run. I just continued working really hard up until this season. I grew a little bit, and it’s just hard work and consistency paying off.”

Holly Duax finished first in both of her individual events, with respective times of 12.25 and 25.06 in the 100 and 200 meter dash. The second-place finisher in both of those events was her teammate, junior Lily Juhnke.

“It’s so nice to be able to compete, and have the environment of the big meets.," Holly Duax said. "We didn’t get to have that last year, and just to be back and running, it feels so good.”

Holly Duax ran at state her freshman year, finishing third in both the 100 and 200. she is no longer the wide-eyed underclassman. Now, she is a team veteran, and someone who has already competed on the big stage. With last season being cancelled, it’s still a strange feeling to be one of the team leaders.

“I still feel like an underclassmen,” Holly Duax said. “I still don’t have all the experience that a junior normally would have, and I had a whole season taken away, but I kind of just had to step up and take the role that my team needed me to play.”

Last time, Duax was West’s only individual athlete competing at state, along with the girls shuttle hurdle relay team. It won’t be quite so lonely this time with her brother by her side.

“He is so excited,” Holly Duax said. “He has been wanting this all season, this is what he has worked for. He put in so much work in the offseason, he worked so hard every practice, and worked so much harder than anybody else. He deserves it so much.”

Michael Duax admits that he didn’t work quite as hard as he could have as an underclassman, saying that he expected success to just come to him. But after two years of disappointment and a year of training, he put in the work that finally took him to his ultimate goal.

He also says that he is excited to not have to watch Holly Duax run from the stands this time. Now, he gets to cheer her on from the track, while getting ready for his own races.

It’ll be a busy day for both of them, but it might be even more hectic for their parents. With their kids running in at least seven events, there will be plenty to keep track of.

“It’'ll be a lot for them, but they’re up to the challenge,” Michael Duax said. “My dad and my mom, they never doubted me. They told me going into this meet that I was going to qualify in more than one event, and that is exactly what happened. I’m glad for their confidence, because I needed that.”

Elsewhere in the meet, East junior Kaia Downs, after placing third overall in the 3000 meter run, tied a track record with a time 2:17.04 in the 800, good for a first place finish and a spot at state.

Downs also qualified by winning the 1500 meter run with a time of 4:48.36, another track record. The runner-up in the 1500 was Lauren Shulze of West Des Moines Valley.

Sioux City North clinched a state spot with a second place finish in the girls distance medley relay and a time of 4:29.69, behind winner West Des Moines Valley.

North junior Yemane Kiffle also earned a spot with a first place finish in the boys’ 800 meter run at a time of 1:57.70, ahead of Nathan Sell of Lewis Central.

In the 200, Michael Duax placed third with a time of 22.62, behind Mikey McClain and Luis Brooks of Lewis Central. Depending on other qualifying times, Duax could still qualify for state in the event.

Senior Owen Hoak of Sioux City East took second in the boys 400-meter hurdles with a time of 59.06, with Will Bussey of Dowling Catholic placing first at 57.54. The West girls won the 4x100 meter relay at 49.95, just barely ahead of second place Dowling Catholic, which ran a 49.97.

Will the Houston Texans be the worst team in the NFL at the end of the season?

Stay away from Justin Herbert's passing yards Prop at 4,550.5

Stay away from Justin Herbert's passing yards Prop at 4,550.5

Should Cade Cunningham be the #1 pick in the NBA draft?

Should Cade Cunningham be the #1 pick in the NBA draft?

Hot or Not: USA Basketball proved with win over Iran they will win gold?

Hot or Not: USA Basketball proved with win over Iran they will win gold?

Michael Duax of Sioux City West qualified for the state meet with a first place finish on Thursday in the boys 400 meter dash in Council Bluffs.

'It's the heartbeat of the football team:' Close-knit SDSU team set to play Sam Houston for FCS national title

'We're going to have fun this year:' Explorers are eager to start season after 19-month layoff

On Tuesday night at Mercy Field, everybody got to come home.

Nebraska approves girls wrestling as a sanctioned sport for 2021-22

SIOUXLAND ATHLETE OF THE WEEK: Spencer senior Kirsten Small is 'fearless' on the pitch

After losing out on her junior season, Spencer senior Kirsten Small has stepped up as a leader for the Tigers this year.

Michael Duax of Sioux City West competes in the long jump on Thursday at the Class 4A-2 state qualifying meet in Council Bluffs. Duax jumped 20 feet, 8.75 inches, to come in first place.