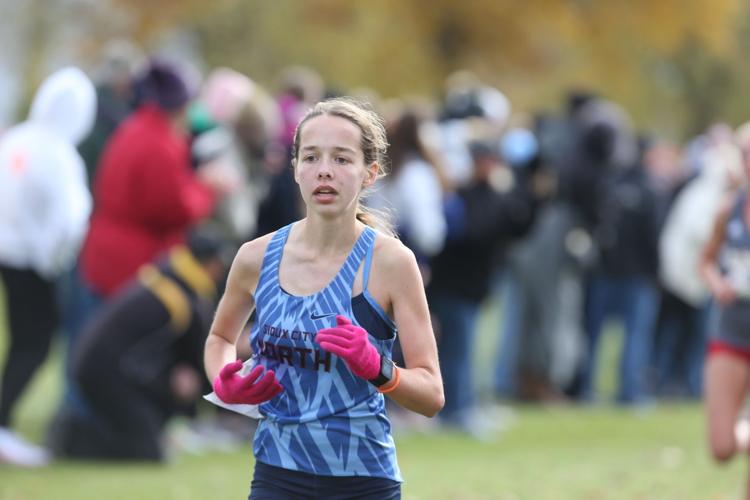 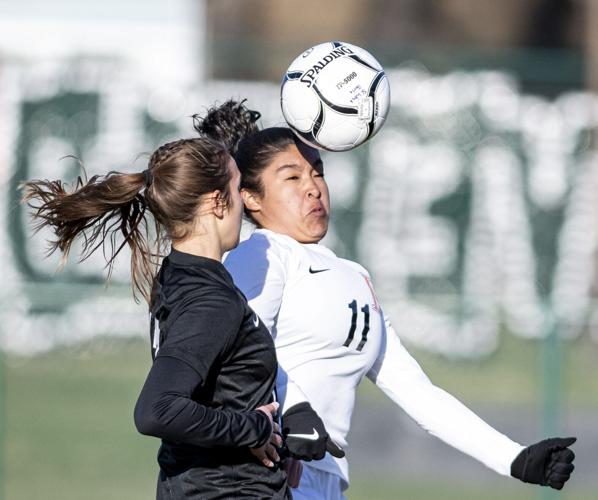 West's Bella Leon, left, and East's Isadora Castaneda, behind, try to keep the ball from going out during Sioux City West vs Sioux City East soccer action on April 14 in Sioux City. 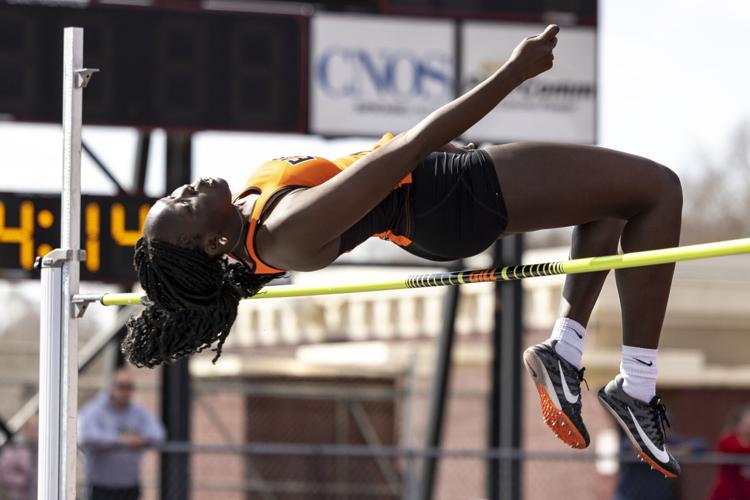 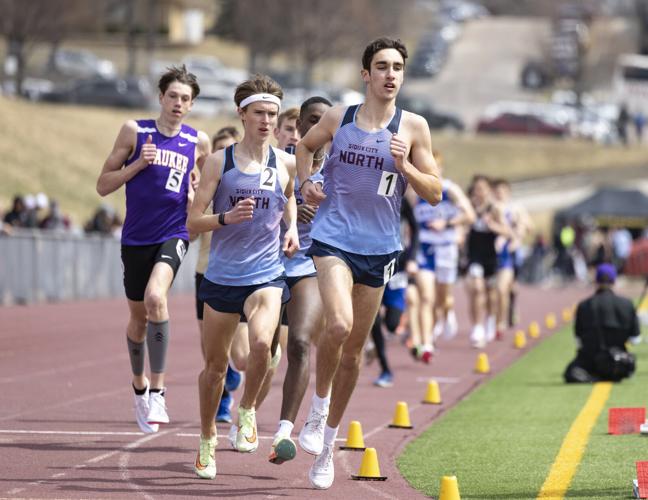 Gabe Nash (1) and Will Lohr (2) of Sioux City North compete in the Boys 1600 Meter Run during the Sioux City Relays on April 9 at Elwood Olsen Stadium in Sioux City.

Here’s a rundown of the city athletes that qualified for state, including where they’re seeded in the 24-team or athlete field, starting with the girls.

100: Just like at the Drake Relays, there are three ladies who will represent the city. West senior Holly Duax is the overall No. 1 seed with a time of 12.13. She has a .29-second lead over second-seeded Avery Horner of Bettendorf.

400: North junior Yanelli Luna made it, and she’ll be the nine seed at 59.86. She is the last among nine runners to have a seed time under 60 seconds.

800: East senior Kaia Downs completed the distance trifecta on Thursday, including in this race. Downs has the No. 4 seed at 2 minutes, 20.74 seconds. The Top 5 runners are all within two seconds of one another.

Shuttle hurdle: The Black Raiders made it with a 21st-seed time of 1:11.63. The four runners slated to run are Addison Beasley, Brylee Hempey, Mia Rice and Baling Tang.

4x100: West has the No. 1 seed in the field, running its time in 48.56 on Thursday. The four runners are Kellesse Heard, Duax, Bella Leon and Lily Juhnke.

East is eighth as well, running it in 50.02. The four runners are Bella Gordon, Grace Erick, Alyssa Erick and Harris.

4x200: East made it with the No. 12 seed, as Gordon, Grace Erick, Trinity Wagner and Harris will be running for the Black Raiders.

Sprint medley relay: West will send Heard, Maya Augustine, Juhnke and Leon to try to improve on their 20th seed (1:54.00).

Long jump: Duax jumped the longest among anyone in the state on Thursday in Fort Dodge, jumping the pit 19 feet, 1 inch.

400 hurdles: Christensen earned the eighth seed with his time of 56.29 he ran on Thursday night.

4x800: The Stars return to Drake Stadium after winning the Drake Relays 4x800, and the quartet of Beshanena Gutema, Nash, Natnael Kifle and Yemane Kifle are seeded seventh in 8:17.30.

Distance medley relay: North has the No. 12 seed at 3:41.18. The four who are scheduled to run are Demarco Young, Dayton Harrell, Yemane Kifle and Lohr.

High jump: West senior Levi Henn and East sophomore Logan Dolphin earned a spot at state, getting the 20th seed each at six feet even.

Boys long jump: East junior Destiny Adams made it and he’ll jump as the 18th seed. His jump on Thursday was 21 feet, 3 1/2 inches.

Shot put: East junior Blake Hogancamp earned a spot at state, and he’s 16th in his field with a throw of 49 feet, 3 inches.

Shuttle hurdle: East made it and it is ranked 14th. The four runners are Adams, Dolphin, Brody Comstock and Carson Pinkerton.

She came from the left cross from about 15 yards out, and aimed toward the high spot of the net to get the ball through. She was flooded with her teammates celebrating her, while her family screamed “Happy Birthday” after she scored her goal.

"I’m going to go out there, do the best I can, and give my team a chance to win. I’m ready to get back out there.”

When the Buena Vista University softball team was knocked out of the American Rivers Conference last weekend in Storm Lake, it had a nervous n…

SIOUX CITY — Bishop Heelan High School senior Anna Fenton finally got to play in nice weather, and she took full advantage of it.

The Musketeers have home ice for the championship round, which starts at 3:05 p.m. Sunday at the Tyson Events Center. Their opponent, however, is unknown.

The Wayne High School girls track team will send five girls to the Nebraska state track and field meet that starts Wednesday at Omaha Burke. The Blue Devils’ boys have two qualifiers: Sedjro Agoumba in the 400 and Jacob Phelps in the 300-meter hurdles.

US Soccer reaches equal pay agreement for men and women

US Soccer reaches equal pay agreement for men and women

West's Bella Leon, left, and East's Isadora Castaneda, behind, try to keep the ball from going out during Sioux City West vs Sioux City East soccer action on April 14 in Sioux City.

Gabe Nash (1) and Will Lohr (2) of Sioux City North compete in the Boys 1600 Meter Run during the Sioux City Relays on April 9 at Elwood Olsen Stadium in Sioux City.