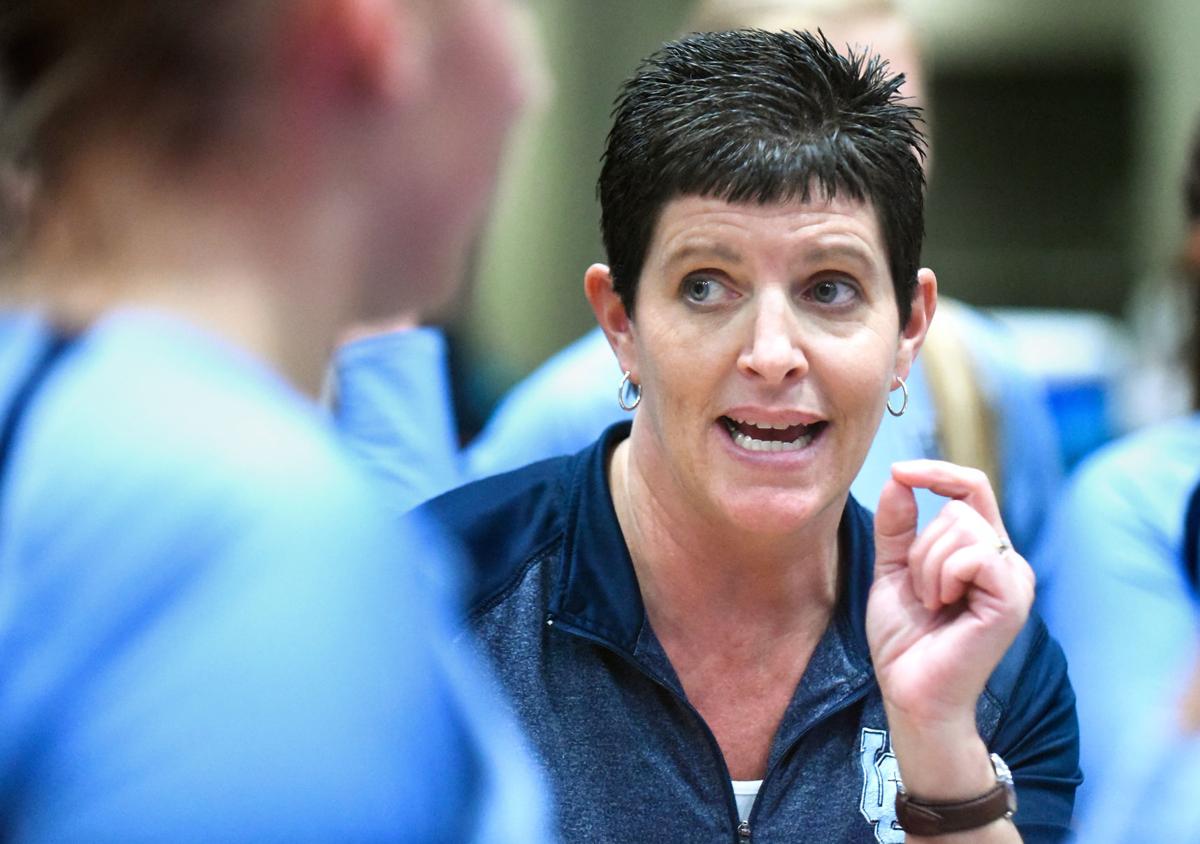 Unity Christian head coach Patty Timmermans talks to her players during the Class 2A quarterfinal-round state volleyball action against Dike-New Hartford in Cedar Rapids, Iowa. Timmermans guided the Knights to a runner-up finish in the 2A state tourney. 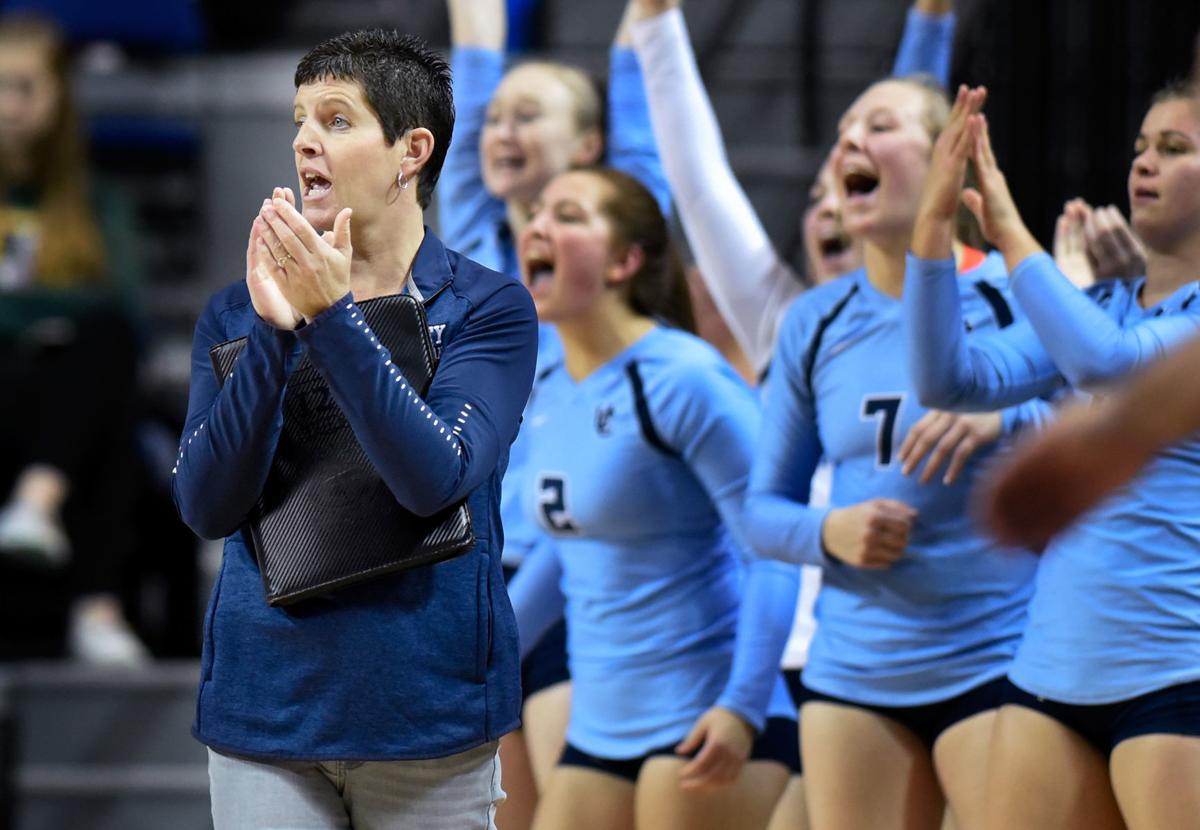 Unity Christian head coach Patty Timmermans reacts during the in Class 2A championship game against Western Christian at the Iowa High School Volleyball Tournament in Cedar Rapids, Iowa in 2018.

ORANGE CITY, Iowa | As the youngest starter on Unity Christian’s volleyball team, sophomore outside hitter Janie Schoonhoven needed guidance and pushing from a coach who she knew would provide both aspects.

As a senior, Jori Bronner knew how tough her coach could be. Yet, as she looks upon her three years as a starting middle hitter, Bronner appreciated those demanding practices because it made herself and her teammates the best they could be.

Patty Timmermans brought out the best in rookies like Schoonhoven and veterans like Bronner who took the program where it hadn’t been since 2001 – the Class 2A state tournament finals.

All of those hard sessions paid off. Schoonhoven prepared herself for her junior season. Bronner tuned herself for potentially continuing the sport in college.

“I think her philosophy is give it your all, go hard on every ball and play every point as intense as you can,” said Bronner while reflecting on Timmermans, honored today as the Sioux City Journal’s volleyball coach of the year.

Unity Christian, under Timmermans’ guidance, reached the Class 2A state tournament for the fifth consecutive year. Perhaps if Western Christian hadn’t capitalized on Game 3 momentum in the 2A title match at the U.S. Cellular Center in Cedar Rapids, the match would have gone a full five games.

“She is a very intense coach,” said Bronner. “You have to play your best all the time. It’s fun to see how that intensity has built our team and made it stronger. If she wasn’t intense, our team wouldn’t have turned out as good as we were.”

“She taught me how to love the game more, how to appreciate it and how to play it better,” said Schuiteman. “Towards the end of the season, I realized it was going to be the last couple of matches with the seniors. I guess I dug deeper and wanted to make the most of the tourney. She pushed me to work with my teammates, make them better, push them to be the best they can be.”

An outside hitter who played for Coach Tom VanDenBosch at Western Christian in the mid-1980s, the former Patty Boer has had an interesting volleyball coaching career.

Then, Timmermans left coaching to raise her family. Her daughters Jessica, Ally and Corrina all played varsity volleyball with their mother as Unity’s head coach in a stretch that began in 2012 when Jessica was a sophomore and concluded this season with Corrina’s senior year.

Unity assistant coach Janna (Bouma) Van Donge first met Timmermans as Wayne Westenberg’s assistant in 1992 when she was a junior with the Knights. She followed Timmermans to Dordt, later served as Unity’s head coach and then became Timmermans’ assistant.

“I have worked with her in lots of different realms and it has been awesome,” said Van Donge, who was Unity's head volleyball coach in 2001, the year it fell in a tense five-game final match to Western.

“We have so much fun together. A lot of times, we catch ourselves saying the exact same thing at the exact same time. We have an extra special bond and relationship because it started years ago. She is a great coach who is going to push them hard and try to get the highest expectation out of them to get them to play their best.”

Timmermans, who has a 182-45 record in nine seasons at Unity, has surrounded herself with coaching influences and outstanding assistants. One of them is Dennis Benson, who guided Maple Valley-Anthon-Oto to state tournaments in 1990, 1992, 1994, 2002 and 2004.

Benson said Timmermans gave assistant coaches responsibilities during matches. Benson picked out spots where the Knights serve, Van Donge was in charge of setting up the rotation while assistant Vanessa Van Kempen compiled that information, leading up to Timmermans’ scouting report.

“The first thing that pops in mind is her willingness to allow myself, Coach Van Donge and Coach Van Kempen to give her input and allow us to have kind of a piece of the team,” said Benson. “She is very accommodating to the experiences we have had in coaching. I think that is a credit to her using everyone’s expertise and her making the decision based on our input. I appreciate that. For her as a head coach, I think there is a lot of wisdom in that.”

Is the Cincinnati Reds recent hot streak sustainable the rest of the season?

How much of a World Series contender are the Chicago White Sox?

How much of a World Series contender are the Chicago White Sox?

What teams could make a push for Aaron Rodgers?

What teams could make a push for Aaron Rodgers?

How the MLB's new sticky substance policy can impact bettors

How the MLB's new sticky substance policy can impact bettors

Unity Christian head coach Patty Timmermans talks to her players during the Class 2A quarterfinal-round state volleyball action against Dike-New Hartford in Cedar Rapids, Iowa. Timmermans guided the Knights to a runner-up finish in the 2A state tourney.

Unity Christian head coach Patty Timmermans reacts during the in Class 2A championship game against Western Christian at the Iowa High School Volleyball Tournament in Cedar Rapids, Iowa in 2018.