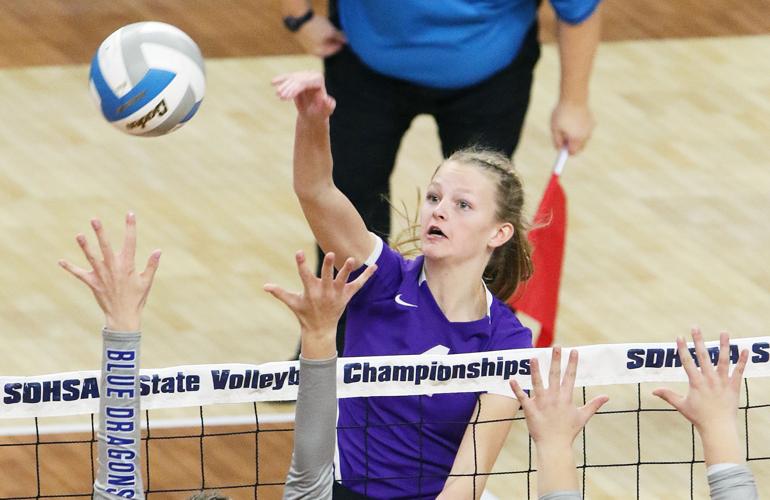 Dakota Valley High School junior Jorja VanDenHul returns a ball back to the Garretson side of the net during Friday's match of the Class A semifinals in Rapid City, S.D. 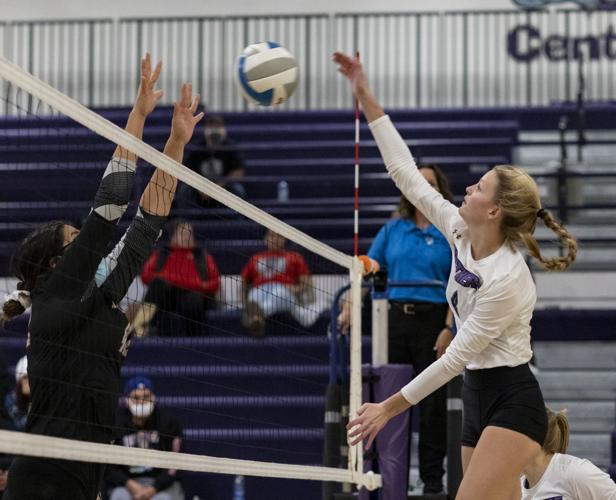 NORTH SIOUX CITY — In 2021, Jorja VanDenHul had to step up her game.

The Dakota Valley High School junior knew coming into the season that she was going to play a major role in the Panthers’ offense, after the graduation of Rachel Rosenquist.

VanDenHul’s role took on even greater importance in the offseason, when returning star senior Sophia Atchison was lost for the year after tearing her ACL in summer workouts.

“At the beginning of the year, when we lost Sophie, that was a huge hole,” Dakota Valley coach Mary Miller said. “That was 300 kills that we had to come up with, so you’ve got to give credit to these young ladies for persevering and buying into our system, and continually working to get better.”

VanDenHul stepped up in Atchison's absence, and filled those shoes in Cinderella fashion.

The 2021 season was a big one for VanDenHul. She emerged as a team leader, a standout middle hitter, and worthy of the title: Player of the Year.

For VanDenHul, this season was a tremendous step forward. When Atchison went down, VanDenHul was told that she would need to pick up much of the slack.

“(Miller) definitely told me that I was going to have to step up and kind of be a leader, just because we lost a few of our great players,” VanDenHul said. “I was becoming older and I was more experienced, so I just had to help lead. And I have teammates that support me, encourage me, and get me to places that I want to be.”

Even VanDenHul was surprised by the numbers she put up. As a middle hitter, she didn’t think that it would be possible for her get so many kills, but she proved to be a potent offensive threat for the Panthers.

“She’s hard to stop,” Miller said. “We used her in all parts of the net. She didn’t just hit middle. She hit left, she hit right, so that is a credit to our passers, getting her the ball and also a credit to our setters for being able to set her anywhere along the net.”

Toward the start of the season, both Miller and VanDenHul admit that they were a bit unsure of how things were going to play out for the Panthers.

The team was coming off back to back appearances in the South Dakota Class A state title game, both of which were losses to Sioux Falls Christian. Following Atchison’s injury, some worries started to creep in about whether Dakota Valley could make another deep playoff run.

Once the season began, the Panthers were just fine. Dakota Valley started its season 7-0 and eventually finished with a 28-9 overall mark.

The Panthers fell short of another title matchup with Sioux Falls Christian, after a 3-2 loss to Garretson in the state semifinals. But the Panthers did manage to clinch third-place at state, with a 3-0 sweep over Wagner this past Saturday.

VanDenHul finished with 11 kills in that match, to put her at 357 on the year. That total puts her 21 kills ahead of South Dakota eighth-place finisher Ally Mullaney of Miller, and five back of sixth-place Ana Egge of Rapid City Christian.

With all the challenges the Panthers faced, this season was anything but easy. It will only get more difficult next season, as Dakota Valley bids farewell to three of its seniors starters, in Madeline Stout, Tori Schulz, and Sammi Archer.

But VanDenHul is confident that she and her fellow 2022 returners can do the work necessary to get the team all the way back to state in her senior year.

“We’re just going to have to work to fill those positions,” VanDenHul said. “But I think we can do it, and I think we can become equal to, or as good as our team was this year, and hopefully make it to state again.”

A look at the All-Northwest Iowa volleyball team, page B2.

Morningside University defeats Ottawa (Ariz.) 63-38 in the first round of the NAIA playoffs.

SIOUX CITY —  It took just one play to turn the tide in Saturday's NAIA playoff opener between Morningside and Ottawa (Ariz.), and it came cou…

CEDAR FALLS, Iowa — It wasn’t the way the the Boyden-Hull/Rock Valley co-op football team wanted to end their season, but after a 14-point los…

'It just wasn't meant to be:' West Sioux falls to Van Meter in Class 1A title game

The Falcons fell to the Bulldogs, 17-14, as Van Meter ran out the clock with a trio of first downs on the final drive of the game.

CEDAR FALLS, Iowa — Ryan Schwiesow has been coaching football for a long time, but this season was his most fun yet.

'That was a great win:' Northwestern starts national tournament with a sweep over Saint Mary

Just seven months ago, Northwestern’s 2020 season ended with a loss to Midland in the quarterfinals of the NAIA National Championship tournament in Sioux City

Dakota Valley High School junior Jorja VanDenHul returns a ball back to the Garretson side of the net during Friday's match of the Class A semifinals in Rapid City, S.D.