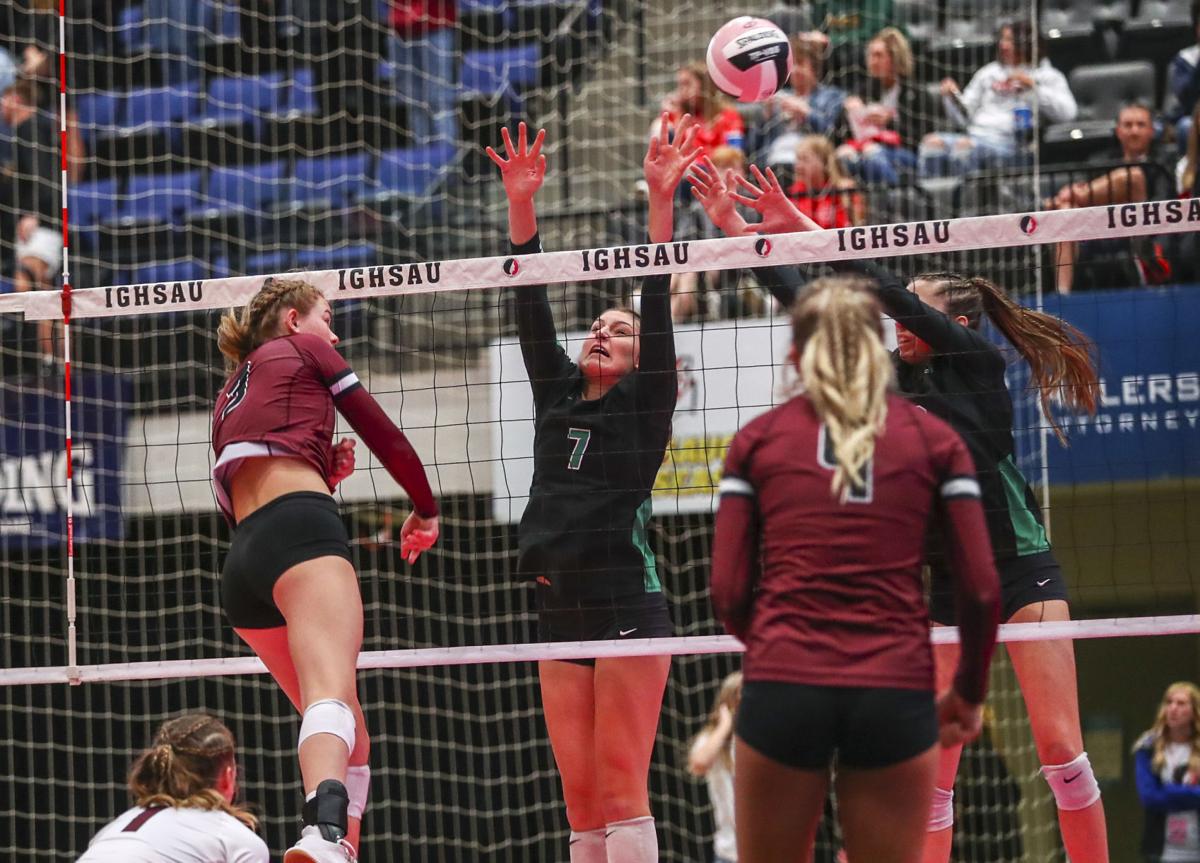 Western Christian junior Abby VerBurg hits the ball over the net against Osage during the semifinal round of the state volleyball championships on Wednesday at the Alliant Energy Powerhouse in Cedar Rapids. 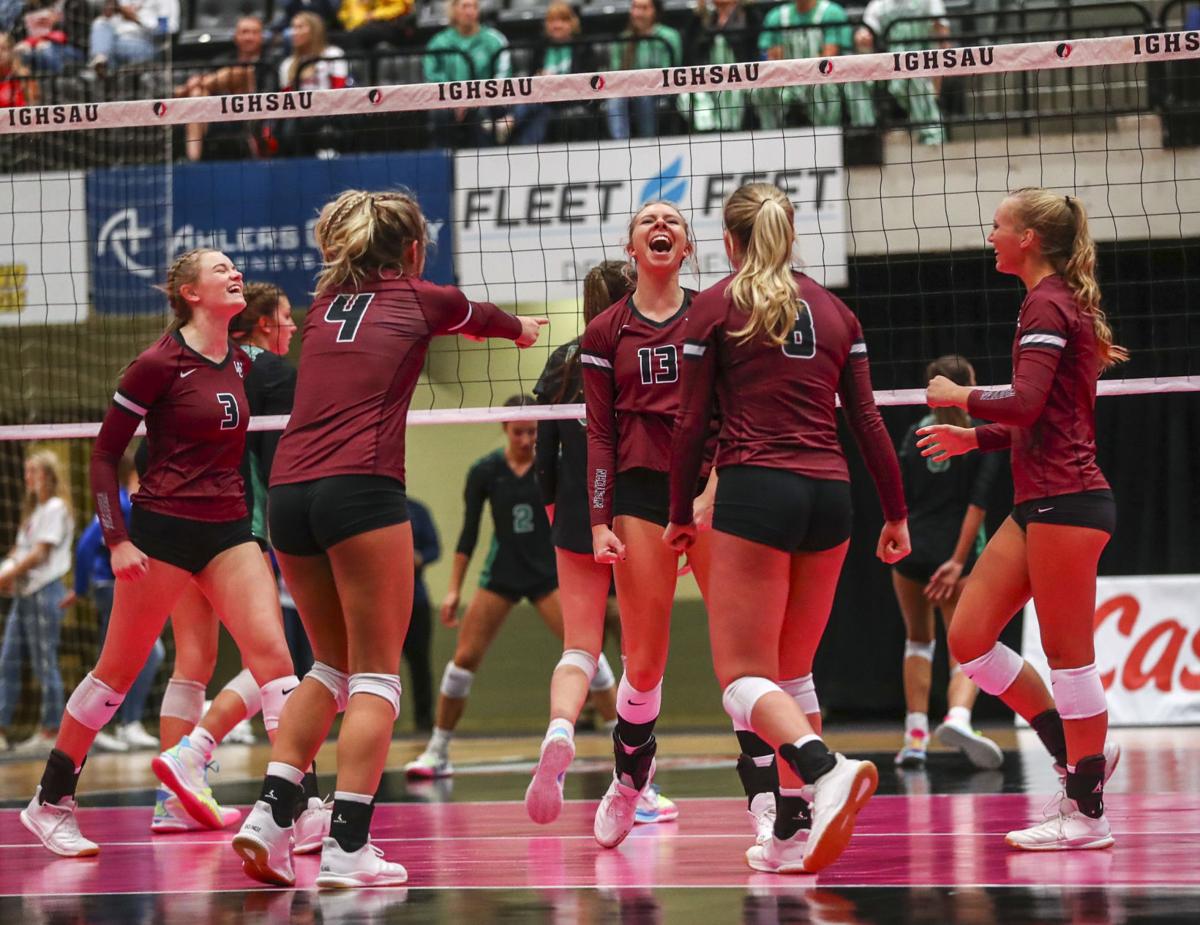 Western Christian players celebrate after scoring against Osage during the semifinal round of the state volleyball championships on Wednesday at the Alliant Energy Powerhouse in Cedar Rapids.

CEDAR RAPIDS — This isn’t Tammi Veerbeek’s first rodeo. She knew how to get the Western Christian High School volleyball team ready on Wednesday.

Simply, the Wolfpack coach just wanted her team to play with more energy.

The Wolfpack came out to win the first set 25-19, and that helped them win the match over Osage in a Class 2A semifinal at the Alliant Energy Powerhouse in Cedar Rapids.

Osage won the second set 25-11, but the Wolfpack came back to win 25-22, 25-18. With the win, the Wolfpack are in the state championship match against Dike-New Hartford.

“As a coach, you’re so happy,” Veerbeek said. “Last year, we missed a chance to go the state championship match, and we used that as motivation. We had to beat four ranked teams to get to this point. We’re just going to enjoy this moment.”

The Wolfpack admitted that they were thinking about the pressure of making it back to the title match.

“It didn’t make us lose our confidence, and it pushed us to play our best volleyball,” Wolfpack senior Jaylin Van Dyken said.

The Wolfpack had to grind through a five-set win on Tuesday in the quarterfinals against Beckman Catholic.

Western Christian dropped each of the first two sets on Tuesday, and Veerbeek said that a lack of energy had to do something with that.

So, she made sure her players got enough rest, and made sure they took the court and had that energy.

“I felt like we were looser,” Veerbeek said. “Our nerves weren’t as tight. We felt like we were in a good head space. I thought they came out with good focus and intensity. We want to play loose and relaxed. When we do that, we’re a really good team.”

The first set was full of energy.

The Wolfpack ended it with a 6-1 run, and Emma Westphal clinched that first set with a kill in the middle of Osage’s square.

Western Christian recorded 16 kills in the first set. Westphal and Stella Winterfeld each had four while Abby VerBurg had three.

Then, in the second set, the Wolfpack simply didn’t pass well. They had just seven kills in the set, while committing six errors.

The Wolfpack got a little tight again.

“We can’t win if we don’t get kills, and we have some powerful hitters,” Veerbeek said. “They realized that and we were able to get that game three and four.”

During those two sets, the Wolfpack combined for 28 kills. Ellie Dokter had four of her nine kills in the third frame, while VerBurg, Winterfeld and VanDyken each had two.

In the fourth set, the Wolfpack hit .412 with 16 kills and just two errors. They forced six errors on Osage, and held them to .243.

Winterfeld led the Wolfpack with 14 kills, while VerBurg had 11.

On Thursday, the Wolfpack and Wolverines will meet for the ninth time in a state championship, and all these meetings have come since 2003, per KMEG Sports Director Owen Siebring.

The Wolfpack put themselves on the opposite side of the bracket so that they didn’t have to meet the Wolverines before the title match.

Western Christian is the No. 3 seed this year, while Dike-New Hartford is once again No. 1.

“We know how the rankings work, and we felt like we were in a really good spot,” Veerbeek said. “We did everything we needed to to get to this game. They put on their spandex the same way we do. We’re going to go battle.”

The last time the Wolfpack were in the championship match was in 2019, where they won in four sets over Beckman Catholic.

WHO: No. 1 Dike-New Hartford vs. No. 3 Western Christian

CLASS 2A VOLLEYBALL CHAMPIONSHIP: No. 1 Dike-New Hartford shows its strength against Western Christian

Opinion: Sean Payton's last season with the Saints was a success

Opinion: Sean Payton's last season with the Saints was a success

Western Christian junior Abby VerBurg hits the ball over the net against Osage during the semifinal round of the state volleyball championships on Wednesday at the Alliant Energy Powerhouse in Cedar Rapids.

Western Christian players celebrate after scoring against Osage during the semifinal round of the state volleyball championships on Wednesday at the Alliant Energy Powerhouse in Cedar Rapids.