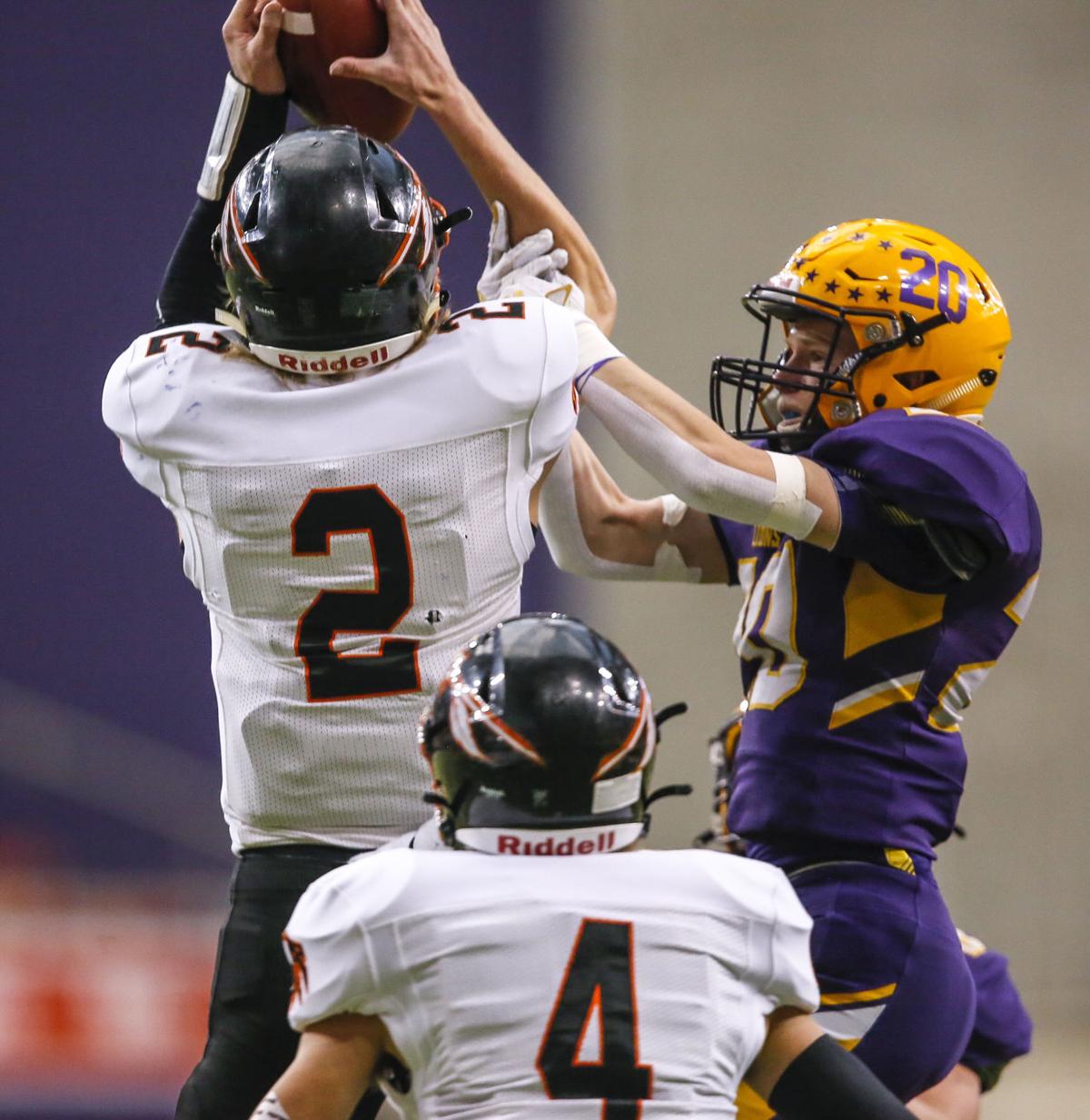 Central Lyon/George-Little Rock junior Taylor Putnam looks on as a pass intended for him is intercepted by Waukon senior Creed Welch Friday during the championship round of the state football playoffs at the UNI-Dome in Cedar Falls. 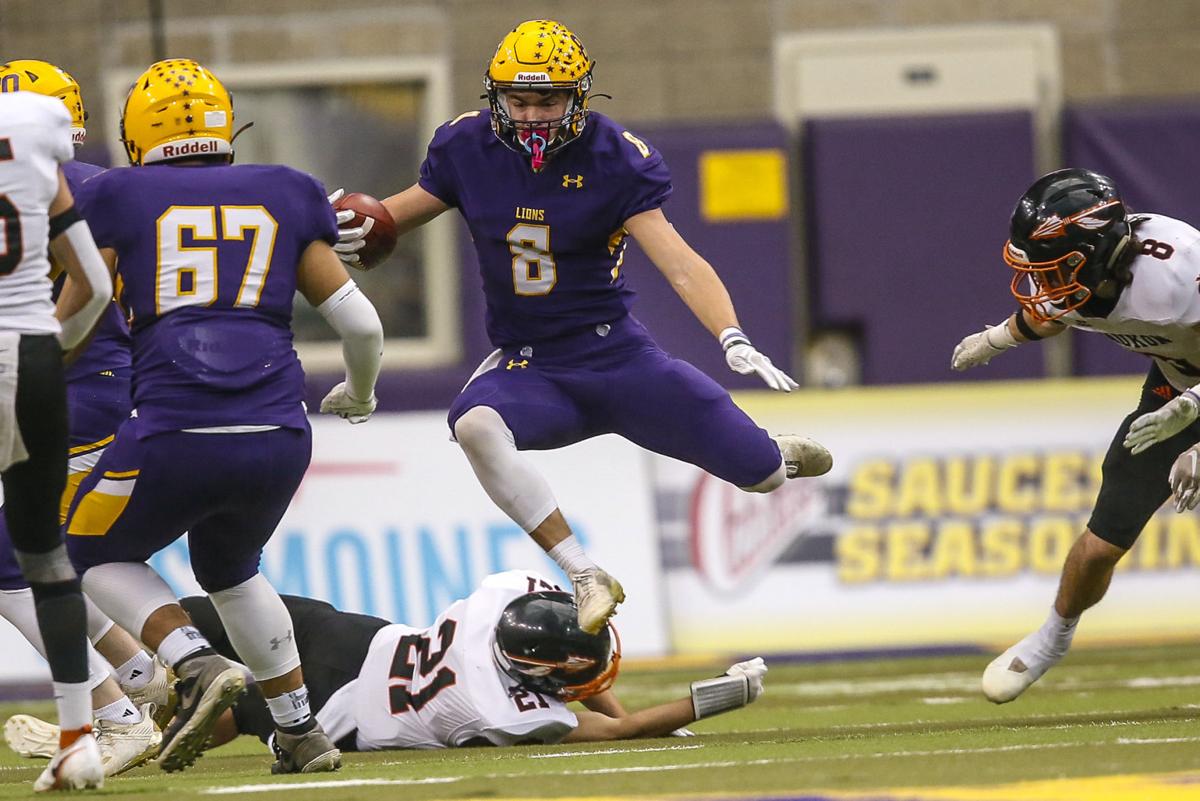 Central Lyon/George-Little Rock junior Cooper Spiess leaps over a Waukon defender on Friday during the championship round of the state football playoffs at the UNI-Dome in Cedar Falls.

It's a tough offense to solve, led by sophomore quarterback Zach Lutmer, who came into the game with the fifth-most rushing yards (1,508) in Class 2A to go along with more than 1,000 passing yards.

Waukon's defense had an answer, though, as the Indians put constant pressure on Lutmer, whether it was in the run game or the pass, and forced the Lions to turn the ball over four times.

The Indians turned those four turnovers into three scores, which the Lions couldn't overcome as Waukon claimed the 2A state title over Central Lyon/George-Little Rock 28-14 on Friday at the UNI-Dome.

"Give all the credit to (Waukon). They have good coaches, good players, they flew around," Lions coach Curtis Eben said. "It wasn't so much what we didn't do, it was just one of those tight ball games. ... You knew it was going to be a good ball game. You knew there were going to be some plays that went back-and-forth. Give hats off to (Waukon) for a good game."

While the loss stings, the Lions made their first trip to the UNI-Dome since 2008 and won one of the toughest districts in the state. Central Lyon/George-Little Rock finished with an 11-1 record.

"Right now, we are frustrated and down and it hurts and that's why we are where we are at because we have (great) competitors."

The Lions first turnover is one Eben didn't think was one.

CL/GLR had it first-and-10 at their own 31-yard line with 5 1/2 minutes left in the first quarter. Lutmer tried to hit Cooper Spiess on a swing pass, but the ball was a bit in front of him and went off Spiess' hands.

The refs didn't blow the play dead. Waukon's Brennan Sweeney scooped the ball up and went 27 yards for the touchdown. The ruling on the field was the ball didn't go forward on the pass, meaning it wasn't a forward lateral. So what seemed like an incomplete pass was actually a fumble.

That gave Waukon an early 8-0 lead.

The Lions did seem to bounce right back as Spiess returned the kickoff to the Waukon 34-yard line and on the first play, Lutmer went up the middle and broke free for a 34-yard touchdown run to make it 8-7.

But CL/GLR was always at least one score behind for the rest of the game.

"Any time they score it is a momentum killer but our guys came back a little bit and got on the board," Eben said. "But it's 8-7 and you are still down a bit and you have that in the back of your head."

The two teams traded punts and then the Lions recovered a fumble at the Waukon 44-yard line.

However, they gave it right back when Lutmer's pass was picked off by Creed Welch two plays later. It was one of three interceptions, all by Welch, and the Lions also lost a fumble in the game.

"We turned the ball over way too much today, something we haven't done too much this year at all," Eben said. "Maybe that's credit to them as much as maybe we played not as good of football as we could've. Credit to them for creating turnovers."

Waukon started at its own 12-yard line after the pick and proceeded to go 88 yards in eight plays as Pat Hennessy scored on a 7-yard run for a 16-7 lead with 5:06 left in the half.

The Lions put together their own long drive, going 72 yards in 16 plays as Lutmer, who had 104 yards rushing, scored on a 6-yard run as CL/GLR got within two going into halftime at 16-14.

CL/GLR opened the second half with the ball and got a first down and that was it before the Lions had to punt.

Kayden VanBerkum picked off Welch but the Lions went three-and-out. Waukon went up 22-14 when Welch hit Braxton Stewart for a 56-yard touchdown with 1:10 left in the third.

The Lions had two more turnovers in the fourth quarter and Waukon's final score came on Ethan O'Neill's six-yard touchdown run for the 28-14 victory. O'Neill rushed for 106 yards in the game.

Last year going into the state semifinals, not much was known about Cooper DeJean around the state.

The Black Raiders graduated standout Nya Diew — among other key players — and the defending state champion Crusaders must replace all five starters. But both have plenty of pieces coming back.

NORTH SIOUX CITY — Defense will be a big focus this year for the Dakota Valley High School boys basketball team.

CHEROKEE, Iowa -- Cherokee scored 27 points in the first quarter as the Class 3A No. 3-ranked Braves cruised to a 73-45 victory over Sioux Cit…

SIOUX CITY — Jay Wright will have to wait for his first win as Bishop Heelan High School girls basketball coach.

See who from your favorite school earned all-state plaudits.

Central Lyon/George-Little Rock junior Taylor Putnam looks on as a pass intended for him is intercepted by Waukon senior Creed Welch Friday during the championship round of the state football playoffs at the UNI-Dome in Cedar Falls.

Central Lyon/George-Little Rock junior Cooper Spiess leaps over a Waukon defender on Friday during the championship round of the state football playoffs at the UNI-Dome in Cedar Falls.