DES MOINES -- Koury Kramer didn’t make any excuses after the game on Thursday or try to hide what didn’t work for the West Lyon High School baseball team: There were too many strikeouts.

Van Meter pitcher Zach Pleggenkuhle got the Wildcats lineup to strike out 11 times en route to a 3-1 win over West Lyon in the Class 2A state semifinals.

Pleggenkuhle was able to slow down an offense that averaged 9.1 runs a game and 7.8 hits a game to zero runs and two hits on Thursday.

“Everybody probably knows that we struck out too much,” Kramer said. “That’s a good pitcher. Van Meter has a good 1-2 punch with (Anthony) Potthoff and the kid we saw today. He kept attacking the zone, and we couldn’t make good enough contact to make them make plays.”

PHOTOS: Class 1A and 2A semifinal round action of the Iowa baseball tournament

Kramer said that Pleggenkuhle is the top-four among the caliber of pitchers that the Wildcats have seen this season. He also referred Remsen St. Mary’s ace Blaine Harpenau, MOC-Floyd Valley’s Colton Korver and Boyden-Hull/Rock Valley’s Eric Salazar.

Korver believed Pleggenkuhle resembled Salazar the most. Both pitchers are left-handed, throw in the mid-80s in terms of miles per hour, and have good offspeed pitches.

“This guy kept filling up the zone,” Kramer said. “He kept attacking us, changed the levels of the quadrants of the strike zone. He is a great high school pitcher.”

Pleggenkuhle picked up his 11th strikeout for the final out, and that came with the Wildcats threatening late.

Jalyn Gramstad got a one-out single to the outfield, but Pleggenkuhle got Jordan Ver Meer and Isaac Bruggeman to strike out to end the game.

The Wildcats were able to score a run off Pleggenkuhle, and that came in the third inning.

Gavin Lorenzen got the other hit in the game, a single to center field. Lorenzen stole second. Lorenzen then advanced to third on a wild pitch with Jackson Kramer at the plate.

Kramer hit a ground ball to Bulldogs second baseman Cody Coffman, but Coffman misplayed it, and that led to Lorenzen scoring.

“We just didn’t put it in play,” Gramstad said. “Coming into the game, you never really expect that. We come into the game confident that we’ll barrel the ball up, but it was just one of those games. I think we could have made better contact, looking back.”

Bruggeman was the Wildcats’ starting pitcher. Kramer wanted Bruggeman to get through the fourth inning, and that’s what the West Lyon senior did in his final game.

Bruggeman allowed two runs -- both earned -- on five hits. He struck out one and walked two. Both runs came on a Jacob Blomgren hit in the third inning.

“He gave me everything exactly that I wanted,” Kramer said. “He’s just a bulldog. We were going to try to get him through three or four (innings). We got through their lineup, and it worked out perfectly.”

The game plan was then to bring in Logan Meyer. Meyer faced five batters and retired two of them. He was charged with a run and loading the bases before Zach Van Beek came in and hit a batter for Van Meter’s third run.

Van Beek calmed down after that, holding the Bulldogs scoreless in the final 1 1/3 innings of the night.

Kramer said he wouldn’t change his game plan if given the chance.

“I know what kind of competitor (Meyer) is,” Kramer said. “The thing I loved about it is that Zach came in and made some big time pitches.”

After the game, the Wildcats met behind the stadium near where the Raccoon River and Des Des Moines River meet. They had a lengthy meeting, thanking the seniors and celebrating what they had done for the program.

This was the first senior group to play at Principal Park, and the first Wildcats team to play in a state tournament game since 1996.

Add a state football championship and a substate basketball appearance, and the seniors have had a good year. There were six seniors on the Wildcats roster this summer.

“This is kind of hard what it feels like right now, but coach was talking about the players that will come after us, what it will mean to them that we made it here, we were the ones to break the door down,” Gramstad said. “It’s awesome to do it now.”

Chip on their shoulder

The team that the Wildcats beat to win that state football championship was Van Meter in the Class 1A title game.

The Wildcats had little trouble with the Bulldogs in November, and the Bulldogs didn’t forget about that going into Thursday’s game.

According to Potthoff, the Bulldogs had a chip on their shoulders before the game.

“We’re a prideful school and we’re a bunch of prideful kids,” Potthoff said. “We got embarrassed in football, and none of us liked that. I think we came into this game with a little chip on our shoulder, and it feels good to get a win. I’d be lying if I said we didn’t.”

Sergeant-Bluff Luton loses to Marion in Class 3A quarterfinals

Over a 15-year tenure, Torno coached both of the Stars' individual state champions, was in the corner when the program's first state finalist took the mat and led North to its only two appearances in the state duals.

Tanner Francksen-Small didn't know how much of a chance he had to land the Sioux City North head wrestling coach opening.

Mason City Newman, winners of the last three Class 1A state baseball championships, got the runs they needed Thursday in a pitcher’s duel, and will vie for a fourth straight title after beating the Hawks 2-0 in nine innings.

Don Bosco held the Panthers to four hits in the loss and the Panthers were handed their first loss since July 9 against fellow state-qualifier West Lyon.

Newell-Fonda misses too many opportunities in state softball loss

The Mustangs left two runners at third and two at second as they were held scoreless as they saw their season end with a 3-0 defeat in the 1A state quarterfinals to Lisbon.

After winning the Western Valley Conference regular-season championship with a 9-0 record, Kingsley-Pierson landed four players on the All-WVC…

The eighth-seeded Panthers will use that mindset to try and pull off another upset Thursday against fifth-seeded Don Bosco.

Akron-Westfield ends the season with a 17-3 record. It was the 15th trip in the last 18 seasons for the Westerners, who missed out on the state tournament last season. 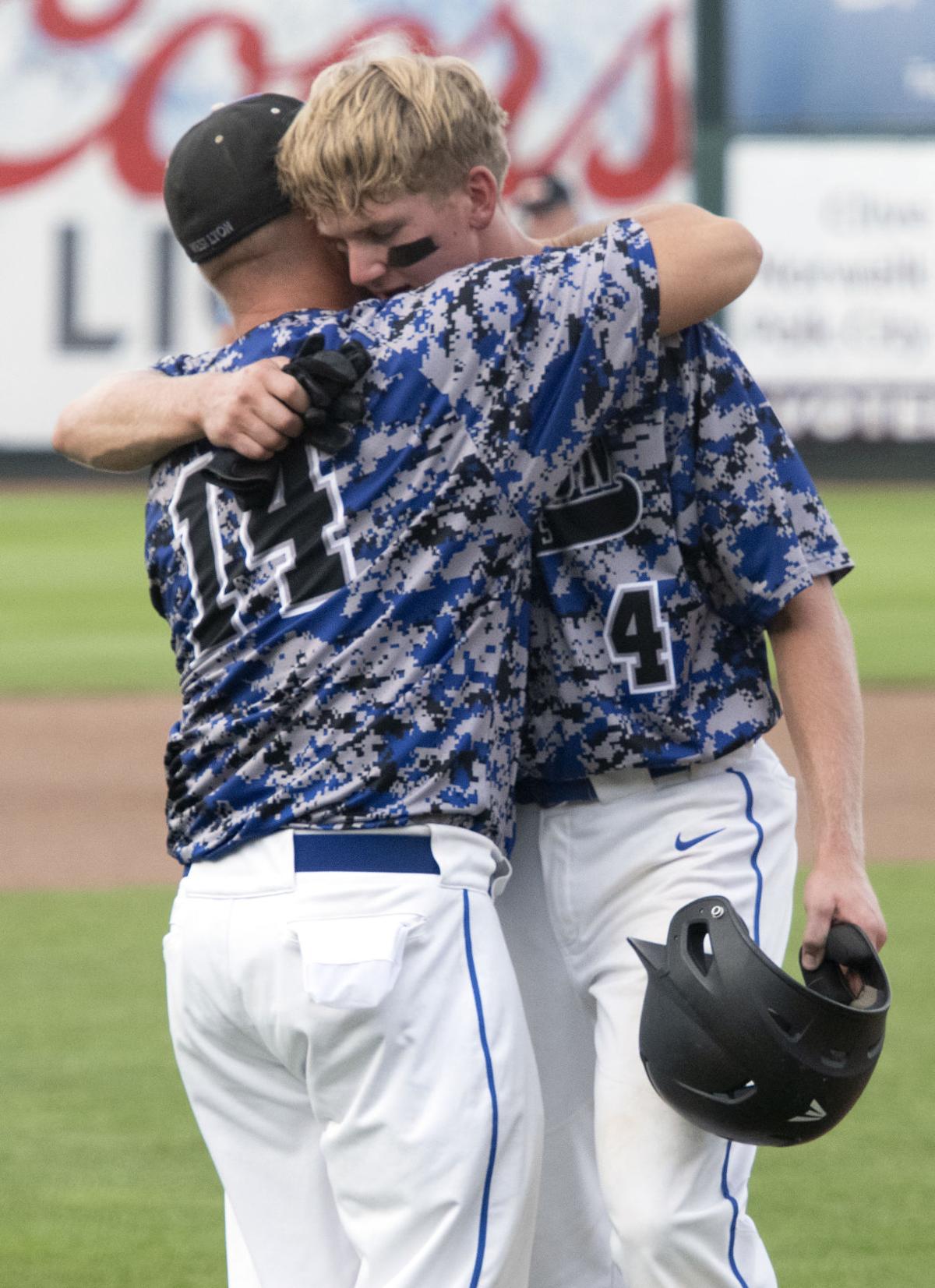 Members of the West Lyon team wave their caps in the air during West Lyon vs Van Meter Class 2A semifinal action of the 2020 Iowa state baseball tournament played Thursday, July 30, 2020, at Principal Park in Des Moines. Van Meter won, 3-1. 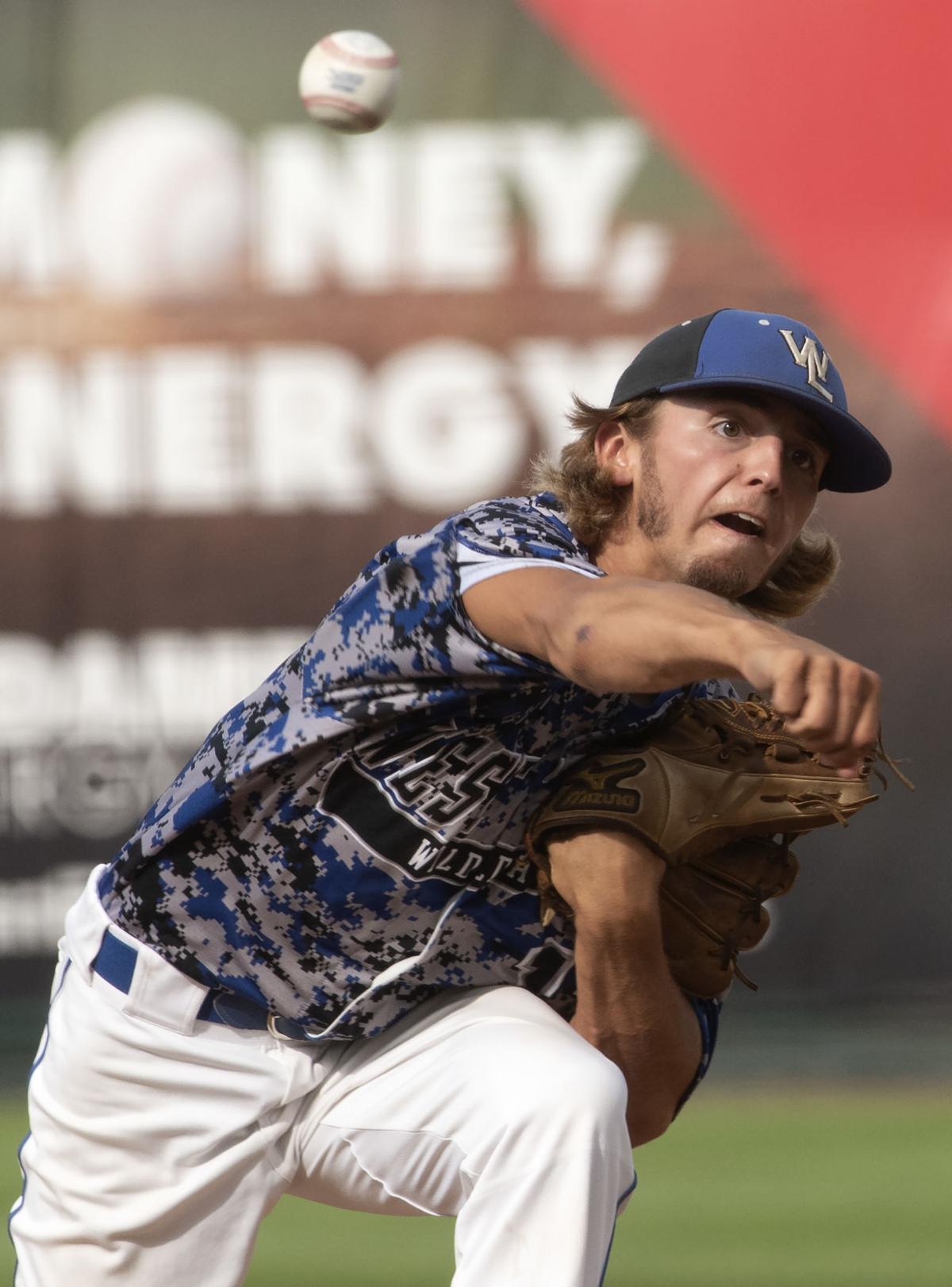