The boys association revealed district and substate games for Class 1A and Class 2A. The IGHSAU turned out its regional brackets for Class 1A, 2A and 3A.

On the girls’ side, each winner of a region clinches a spot to the state tournament.

The playoffs start next week already.

Here’s a region-by-region and district-by-district look at where the area schools land.

Region 2: Newell-Fonda received the No. 1 seed and a first-round bye. The Mustangs, ranked second in the state, will see the winner between Fort Dodge St. Edmond and Ankeny Christian in their first playoff game.

The Mustangs were scheduled to play Class 3A No. 1 Cherokee on Thursday night but that game was canceled.

Region 4: Third-ranked Kingsley-Pierson earned a No. 1 bye, and it’ll await the winner of Boyer Valley against River Valley, which plays next Thursday night in Dunlap.

Logan-Magnolia got the other first-round bye in the region, meaning if chalk plays out, the Panthers will see Lo-Ma in the state qualifying game.

Region 7: This region included 12 teams in the Siouxland area. MMCRU received the lone bye in the pod, and the Royals will await the winner of George-Little Rock and Harris-Lake Park. The Mustangs and Wolves will play at G-LR next Thursday.

Siouxland Christian got a first-round home game, and the Eagles will play on Thursday against Woodbury Central.

Also, on that night, Westwood hosts Trinity Christian and Whiting hosts Akron-Westfield, both games tipping off at 7 p.m.

Region 7: Central Lyon received the top seed in the region, and the Lions also got a first-round bye.

With that bye, the Lions await the play-in game winner between West Sioux and Western Christian. The Wolfpack hosts that play-in game at 7 p.m. on Feb. 13.

The winner between the Falcons and Wolfpack against the Lions is on Feb. 16.

There’s one other play-in game in this region, and it involves Boyden-Hull traveling up to Rock Valley to face the Rockets. That game is also at 7 p.m. on Feb. 13.

That winner faces Sibley-Ocheyedan on Feb. 16.

The Sioux Central Rebels also received a go-ahead to the quarterfinals, and they’ll head to Emmetsburg to play the E-Hawks on Feb. 13.

Region 8: West Monona, Hinton and Ridge View are among the three teams to automatically advance to the quarterfinals.

Treynor got the first-round bye in this pod, and it’ll host the winner between Lawton-Bronson and Missouri Valley. That play-in game is in Lawton at 7 p.m. on Feb. 13.

MVAOCOU plays Tri-Center in the second play-in game in the regional, and the third is between South O’Brien and Alta-Aurelia.

The Spartans and Blackhawks play one another in a quarterfinal game, with the game being held in Onawa at 7 p.m. on Feb. 16.

Ridge View, which received a bye, awaits the winner between the Wolverines and Warriors.

Region 1: No. 1-ranked Cherokee is the lone area team in this pod. There are no byes here, but the Braves hold the top seed.

Their first game is at home at 7 p.m., Feb. 13, against Carroll Kuemper Catholic.

Region 2: Unity Christian got the first seed in this pod, and even though the Knights didn’t get a bye, they’ll play Algona on Feb. 13 at 7 p.m. at home.

Region 6: All eight teams are local, and West Lyon took the top seed among the Siouxland region.

The two semifinal games will be played on Feb. 17 at West Lyon and O’Gorman Fieldhouse in Sioux City.

Seedings and brackets for Classes 4A and 5A have not been released yet.

District 1: Remsen St. Mary’s earned a first-round bye, and the Hawks will await the winner between George-Little Rock and Storm Lake St. Mary’s.

Trinity Christian travels to Hartley-Melvin-Sanborn for a boys quarterfinal, also on Feb. 15.

The district championship game will be at 7 p.m. on Feb. 23 at Sioux City East.

District 2: Gehlen Catholic gets a first-round bye, and the Jays will play against the winner between Whiting and Akron-Westfield. The Westerners are hosting the play-in game.

The other three Feb. 15 district quarterfinals are: Siouxland Christian at Kingsley-Pierson, Westwood at Woodbury Central and Lawton-Bronson at River Valley.

District 1: OABCIG got the first-round bye, and the Falcons will play whoever wins between Kuemper Catholic and Manson-Northwest Webster.

Ridge View is also in that pod, facing Missouri Valley in a Feb. 15 first-round game.

The Comets and Knights will play a Siouxland squad in the quarterfinals.

Boyden-Hull awaits the winner between West Sioux and Hinton while Cherokee and MVAOCOU will battle to earn the right to play Unity.

District final locations have not been set yet.

District 3: Western Christian and Rock Valley are already in the state semifinals.

The two play-in games before that are: Sheldon at Central Lyon and Sibley-Ocheyedan at West Lyon.

District 4: Spirit Lake and Alta-Aurelia are the top-2 teams in the district, and both teams have earned a trip to the district semifinals.

Both top-5 teams were a little weary last week. But both are continuing to do a lot of winning.

The Rockets — second in the Siouxland Conference — moved to 14-4 by clamping down on defense in the second half.

"Our defense came out and played hard and gave us time and we finally started to make shots and extended the lead," Comets coach Bill Francis said. "But I’m so happy with how hard the kids are playing.”

The Spartans will be represented in 10 of the 11 events, and they're ranked in the top 10 in four disciplines.

“We have been focusing on defense as of late," Wildcats coach Matt Jenness said. "Our goal is to get down to limiting teams to 40 points. When we’re locked in, we can be pretty good."

West Monona stops Hinton to advance to Class 2A playoffs

The Spartans allowed just 34 points in advancing to the regional semifinals.

The Crusaders won the overtime period 9-4. “We’ve been in so many close games, and we gut out close games,” coach Jay Wright said.

With an 86-56 victory over Woodbury Central, the No. 4 Jays will face their conference rivals with a state tournament berth on the line.

"Three games was all we needed, and we put it up on the board," Royals coach Gillian Letsche said of the path to the state tournament. "Tonight, we could check the last one off.” 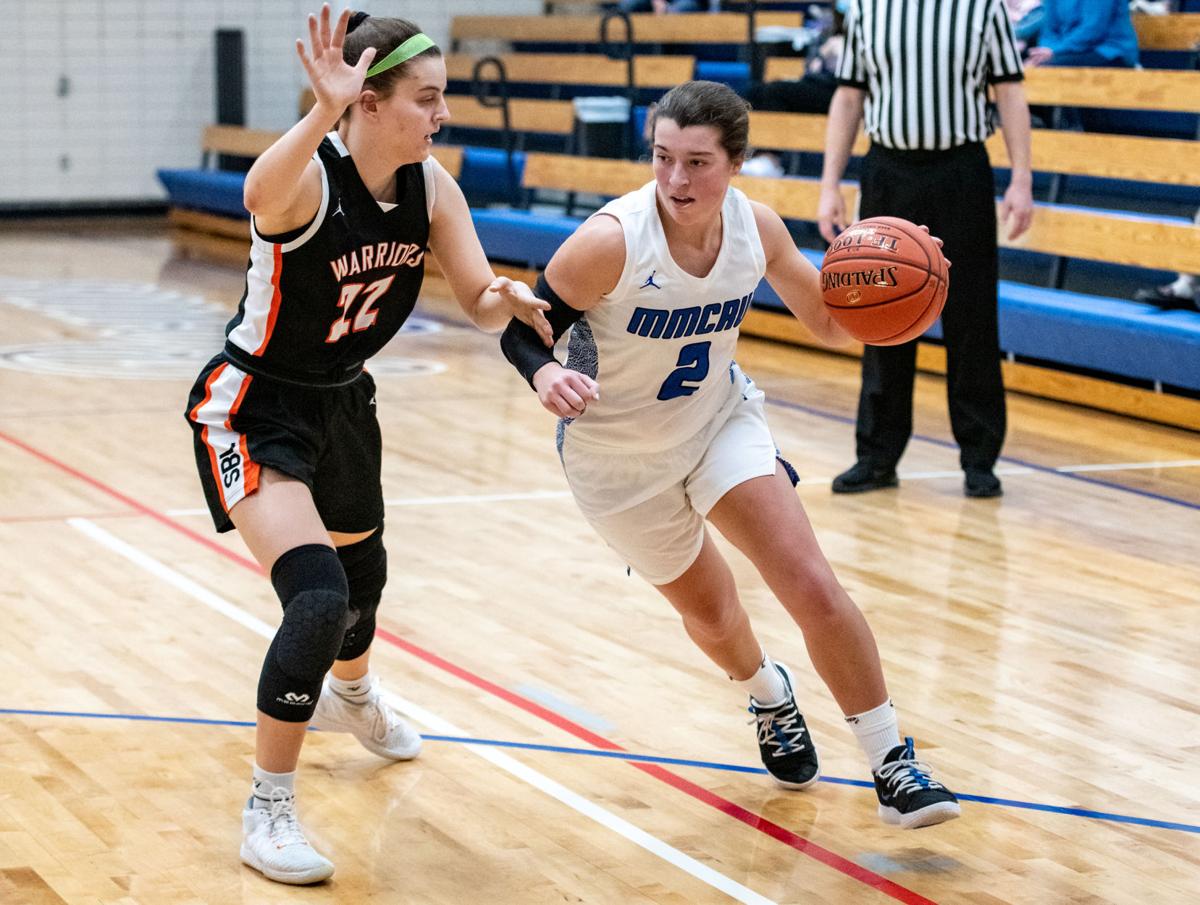 MMCRU's Taylor Harpenau dribbles towards the basket as Sergeant Bluff-Luton's Emma Salker defends her during a non-conference game on Jan. 8 in Marcus, Iowa. The Royals are a No. 1 regional seed heading into the playoffs. 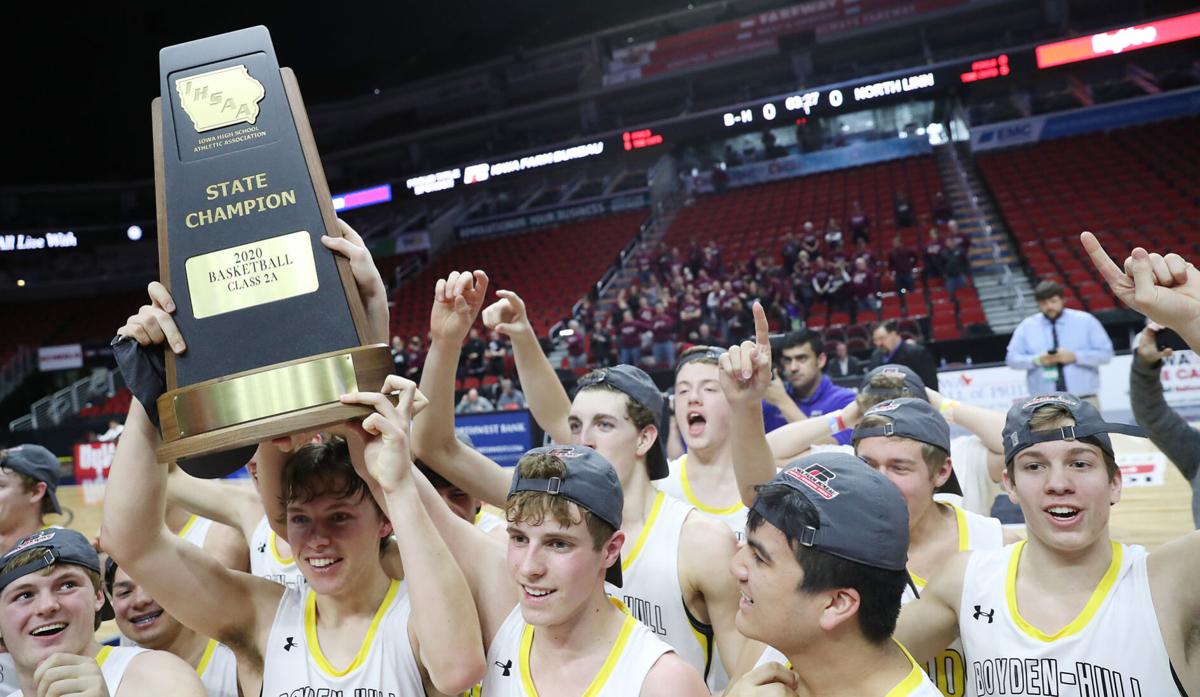 Boyden-Hull players celebrate after defeating North Linn, Troy Mills 64-51 in the 2020 IHSAA Class 2A championship game at the Wells Fargo Arena in Des Moines. Boyden-Hull is currently ranked No. 1 in Class 2A. 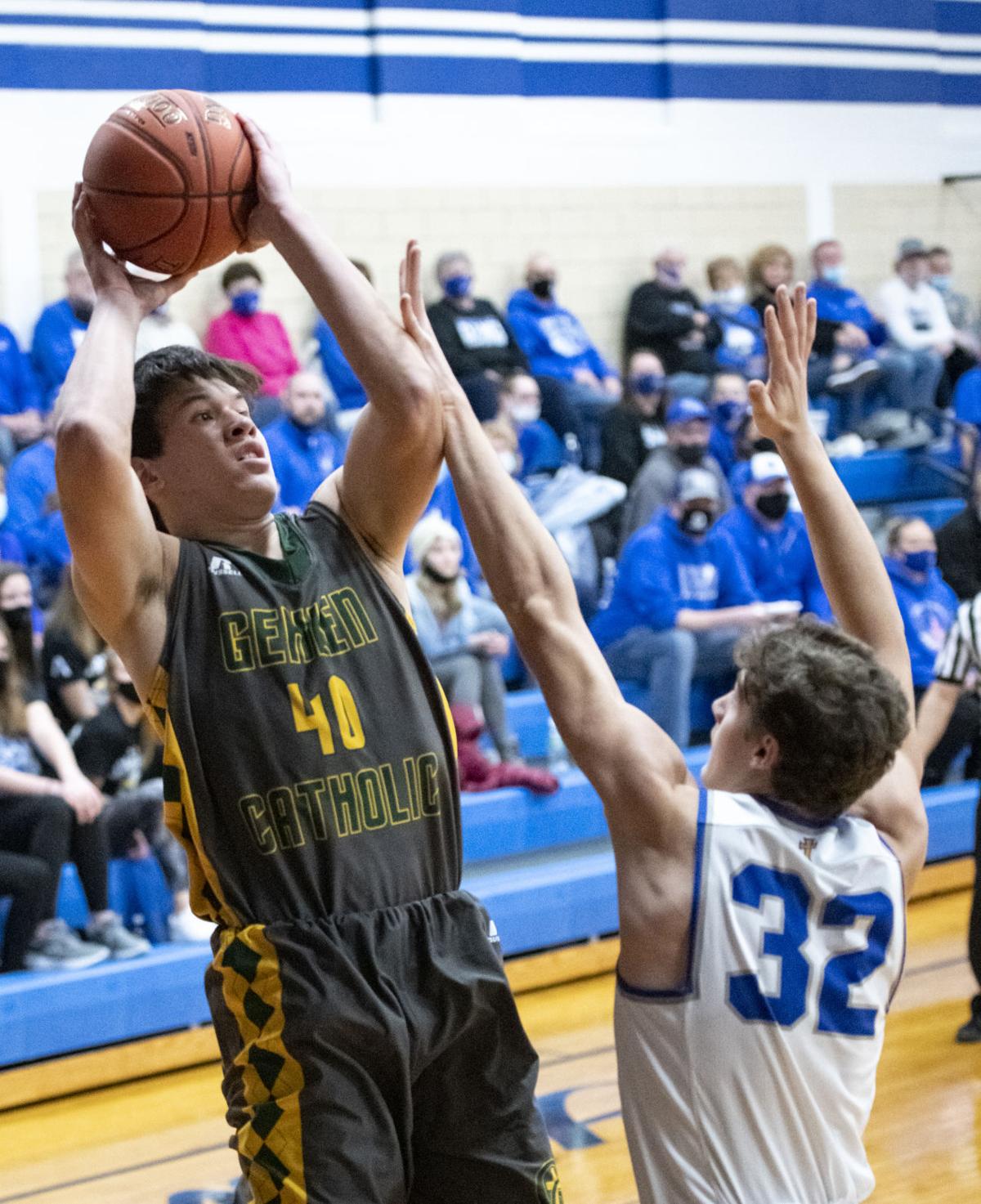 Gehlen Catholic's Zach Kraft leaps for a shot as Remsen St. Mary's Austin Jensen defends him during a Jan. 26 basketball game in Remsen, Iowa. Both teams earned pretty good seeds in their respective districts for the playoffs.