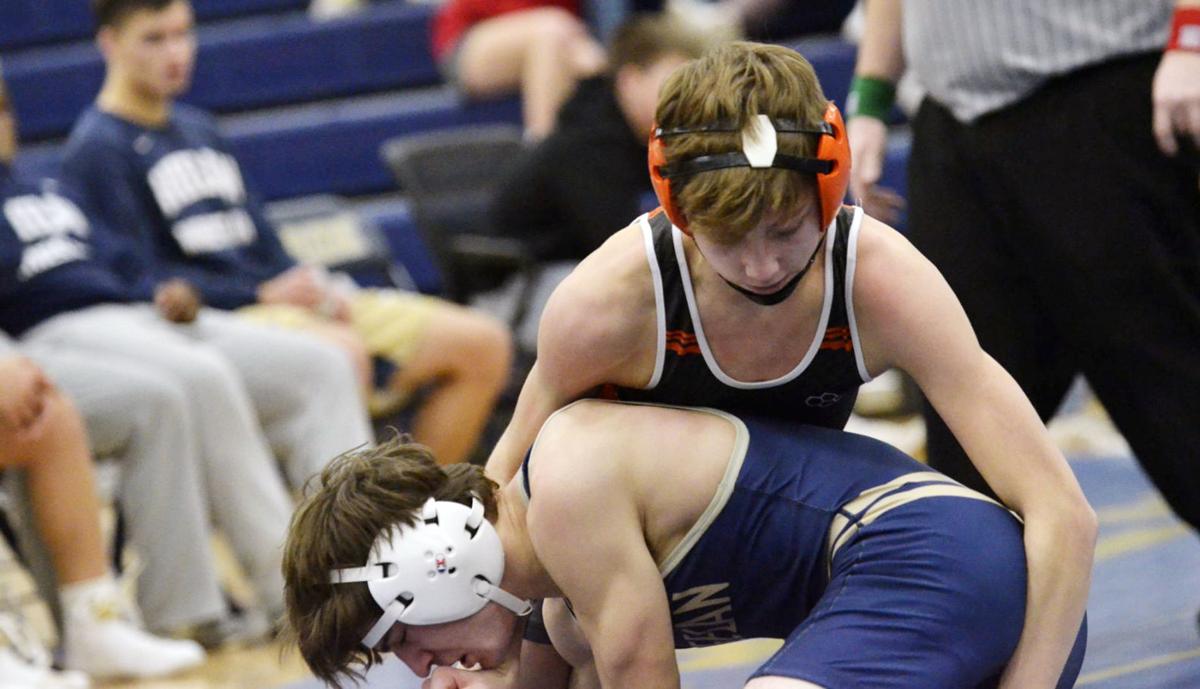 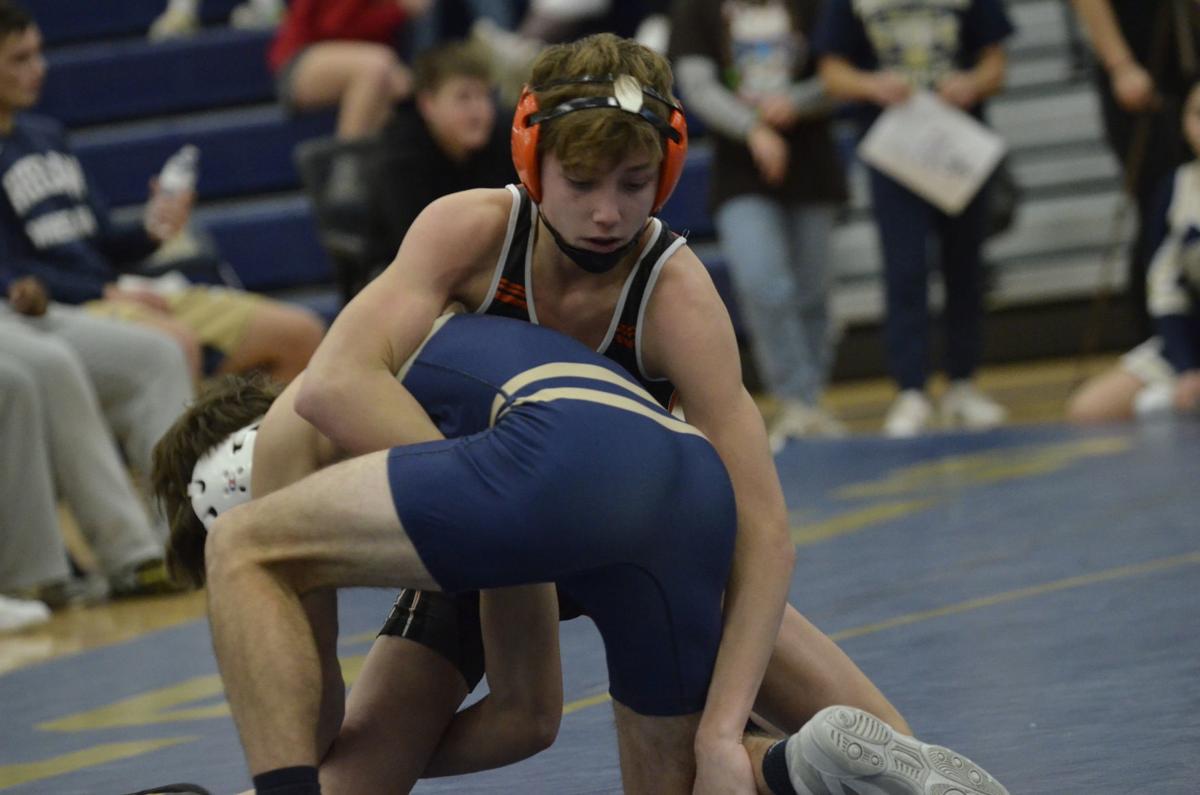 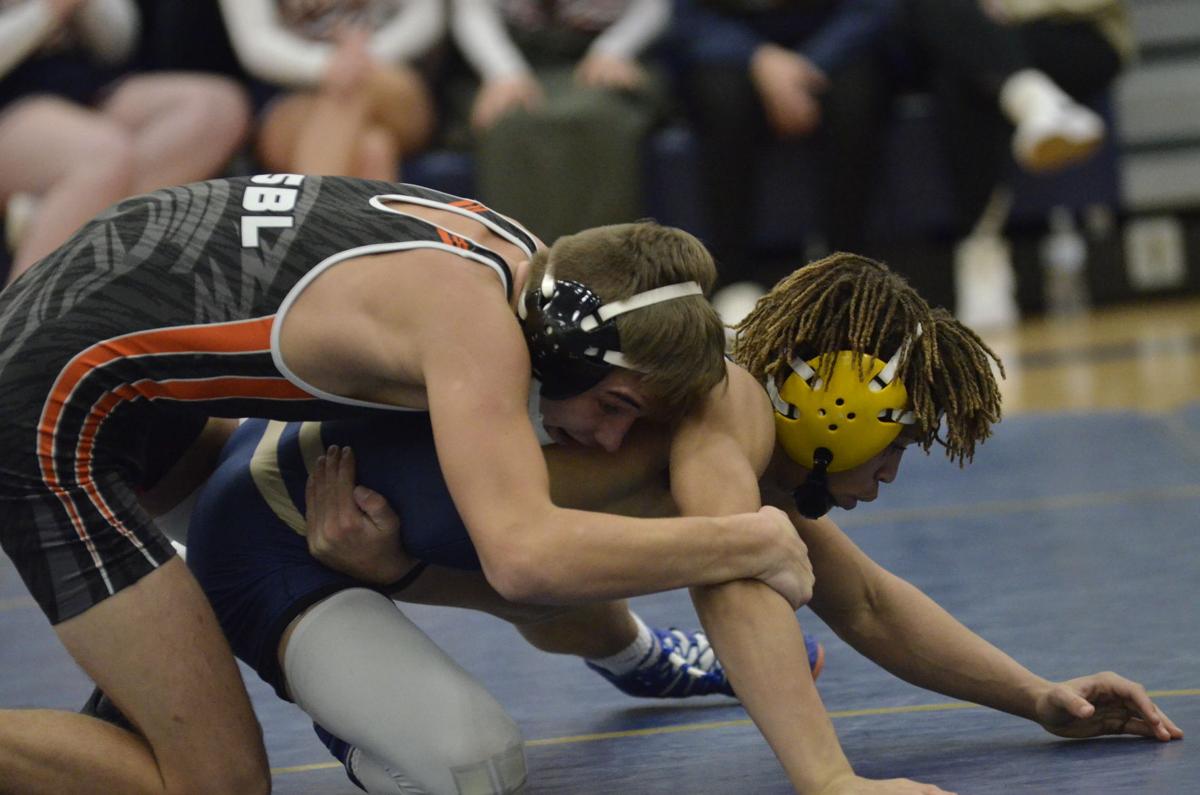 SIOUX CITY — Sergeant Bluff-Luton High freshman Bo Koedam is already an accomplished wrestler, but you wouldn’t know it by looking at the walls of the basement at the Koedam family house.

The trophies and medals from his accomplished youth career have been taken down and put away, the keepsakes from his multiple kids' state titles and his many tournament victories relegated to the land of memory.

“I asked him, 'What’d you do that for, son?,” SB-L head wrestling coach Clint Koedam said. “He said, ‘It’s time to prepare for something bigger than this.”

Based on his performance so far for the Warriors, big things are on the way.

Bo has emerged as one of the state’s top young wrestlers over the first month and a half of his high school career, with a 24-4 overall record, and a No. 5 ranking at 126 pounds in Class 2A, according to IAwrestle.com.

Bo is just the latest in a line of successful Koedams on the mat. His father, Clint, is the head coach at SB-L, and his older brother, Ty, is one of SB-L’s top wrestlers too, ranked No. 6 in Class 2A at 138 pounds.

For all of the Koedams, wrestling has been a lifelong passion.

Clint wrestled at Buena Vista University back in the 1990s,  while second cousin Cullen is 27-0 on the mat for West Sioux High School this season, and is the No. 3 ranked 160-pounder in Class 1A.

The youngest Koedam, Dax, is a sixth grader who won the kids state championship last week in the 68 pound division.

“We did a ton of wrestling around the house, mom was always telling us to go downstairs or go out in the barn,” Bo said. “We were always messing around anywhere. We were always looking for an extra workout, whether it was morning workouts, lifting, all that stuff. It was definitely, growing up, a wrestling lifestyle.”

Bo and Ty both grew up competing against and wrestling what are now some of the top wrestlers in Northwest Iowa. which Clint Koedam thinks is a big part of why Bo has hit the ground running in his first varsity season.

He wins a lot now, but Bo spent a lot of time losing and getting his butt kicked by older competitors when he was a kid, which seems to have been a valuable experience for the middle Koedam brother.

“The thing that I think makes Bo good at his craft is he is such a competitor,” Coach Koedam said. “He has benefited from getting beat on by his junior brother, Ty, Hunter Steffans is a junior, Noah Parmelee is a senior, those are the guys that Bo grew up wrestling with through youth club, getting beat on again and again … he has just developed such a competitive spirit.”

Bo had plenty of success before high school, with youth state titles in each of the past two seasons, and countless tournament wins over the years. Once he got to high school though, Bo was prepared for what others told him might be a “rude awakening.”

So far, that hasn’t been the case.

Bo earned his 24th win of the season on Thursday at the Bishop Heelan Triangular by beating Ethan Lamson of Bishop Heelan by fall at 1:47. Two matches later, Ty earned his 30th win with a thrilling 6-4 sudden victory against Sir Brandon Watts, as the Warriors took down the Crusaders, 54-11, to win the Missouri River Conference Dual title.

Earlier in the day, both brothers won by default in an 83-0 Warriors win over Sioux City North.

For Ty, who is a two-time state qualifier, the experience of watching his little brother succeed is almost as exciting as being out there on the mat himself.

“A lot of people ask me, 'Do you compare yourself to Bo?'” Ty said. “No, I am super proud of what Bo has accomplished. I’m super proud of him, and I could care less if he does better than me. I want him to be the best he can be. It’s like I’m out there wrestling again. I want it for him, so, so bad.”

With just three weeks to go until state sectionals, Bo Koedam is eager for his first wrestling postseason to arrive. He’s been to the state tournament before as a spectator, and has spent time on the mat with the Warriors at Wells Fargo Arena the past couple of years. The atmosphere will be nothing new.

The biggest hurdle to winning a state title is going to be overcoming the foe inside his head.

“He knows what it’s like,” Ty said. “The biggest thing for him is just going to be mental. He’s physically there, he’s technically there, he’s just got to believe in himself, and I’m sure he can place super, super high on that podium.”

The state wrestling tournament is just over a month away, and Bo and Ty both have a lot of work to do before they get to wrestle at The Well. Once the tournament is over, though, and the medals are handed out, Bo could have some interior decorating to do.

He's not thinking about the AAU titles or kid's championships anymore. His focus now is getting to Des Moines, and maybe adding a few pieces of hardware to the bare basement walls.

“It’s kind of a new chapter that I’m looking forward to, and I’m excited for,” Bo said. “I want to get that all out of mind, and now I’ve got to rebuild it.”

With their two wins, the Class 2A No. 5 ranked Warriors clinched the Missouri River Conference dual title.

A total of nine Musketeers players were named to the NHL Central Scouting Midterm List on Wednesday, which ranks the top players in North America that are eligible for the upcoming NHL Draft.

Caleb Holmes is a multi-tool weapon on the floor for the Blackhawks. His 255 points is by far the most on the team, and is currently tops in the War Eagle Conference. He also leads the team with 24 3-pointers and 28 steals, 2nd most in the conference.

The honor marks the fourth time that Ryan has been named the National Coach of the Year, and comes after a season where he led the Mustangs to their third national title in the past four seasons.

HAWARDEN, Iowa — It’s not easy to stay perfect, but through the first half of the wrestling season, a trio of West Sioux High School wrestlers…

In all, Sioux City took 30 shots on goal against the Lancers, while securing its 16th win of the season.

The Chargers and Mustangs meet at 7 p.m. Saturday at Morningside, as both teams continue the GPAC season. Over the last four meetings between the two, the Mustangs and Chargers have split them, going 2-2 apiece.

SIOUX CITY — Sometimes in basketball, it all comes down to the final shot.

SIOUX CITY-- It all came down to the final match.

MOVILLE, Iowa — The Kingsley-Pierson High School basketball team held Woodbury Central to 13 points in both the second and third quarters to b…

Jeff Davenport died in 2014 at the age of 57, but the South Sioux Cardinals wanted to make sure his legacy lived on.

Bishop Heelan's Kenley Meis scored nine pivotal points in a 13-0 run for the Crusaders, and that run spanned from the final minutes of the second quarter over into the third quarter. #iahsbkb

VERMILLION, S.D. — Even as a freshman, Grace Larkins is making a mark on the University of South Dakota women’s basketball team.

No. 6 SB-L grinds out victory

On Thursday night at Elk Point-Jefferson High School, the visiting Akron-Westfield High School girls basketball team earned a solid road victory, as a quartet of Westerners led the way in a 55-46 win over the Huskies.