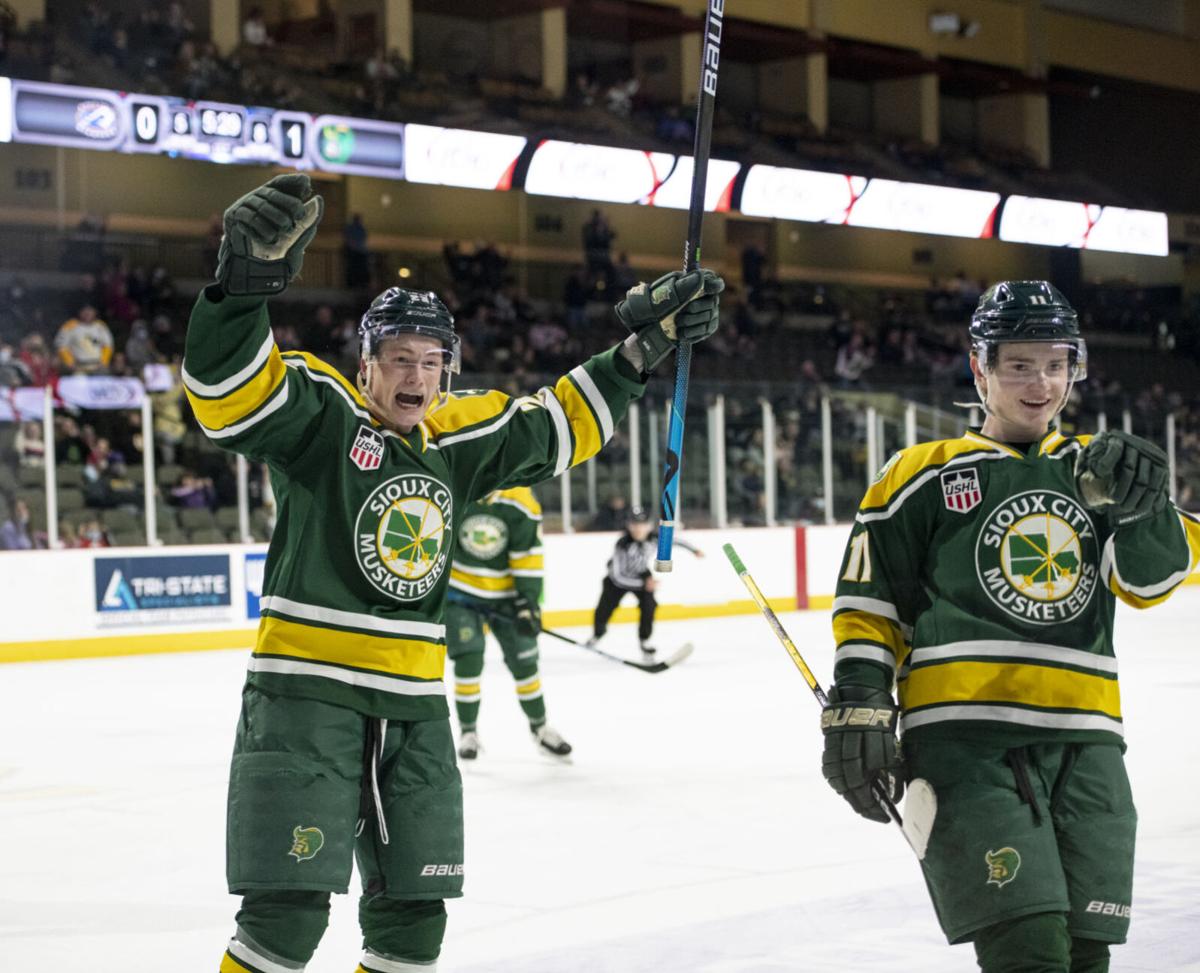 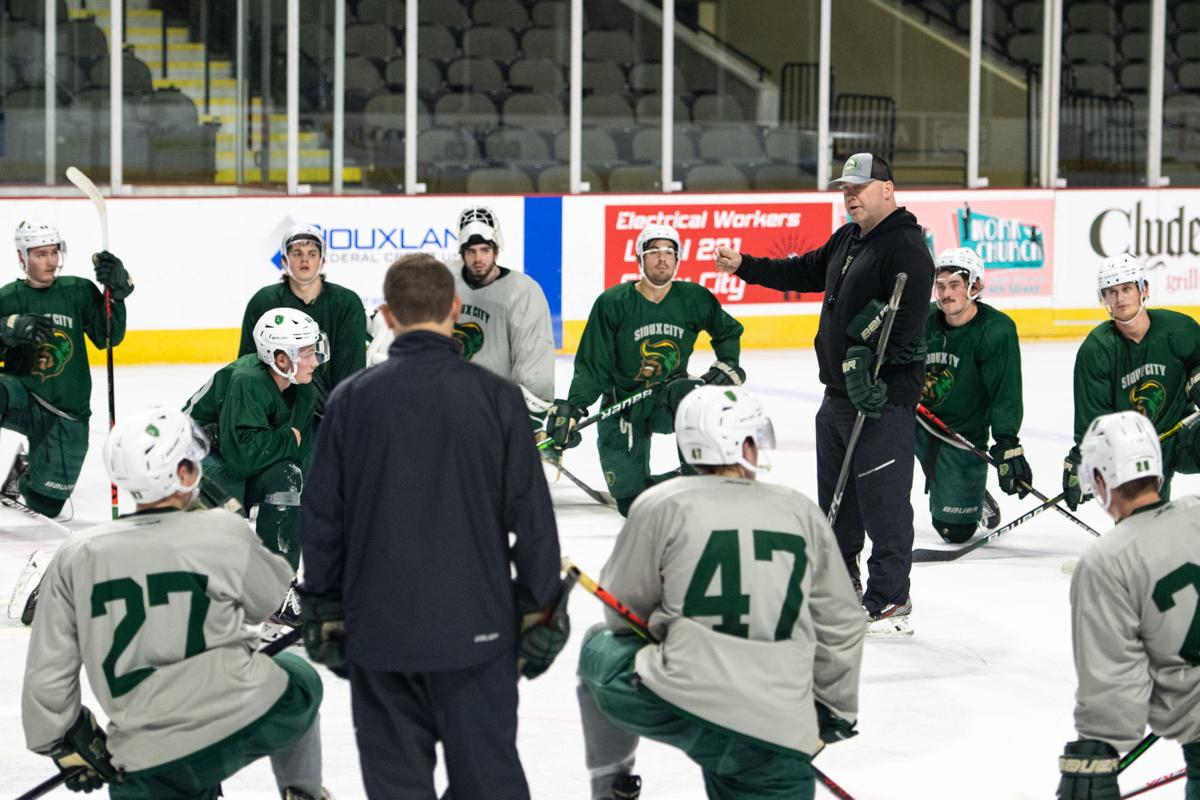 Sioux City Musketeers head coach Luke Strand addresses the players at the end of practice on Nov. 5 at the Tyson Events Center in Sioux City. 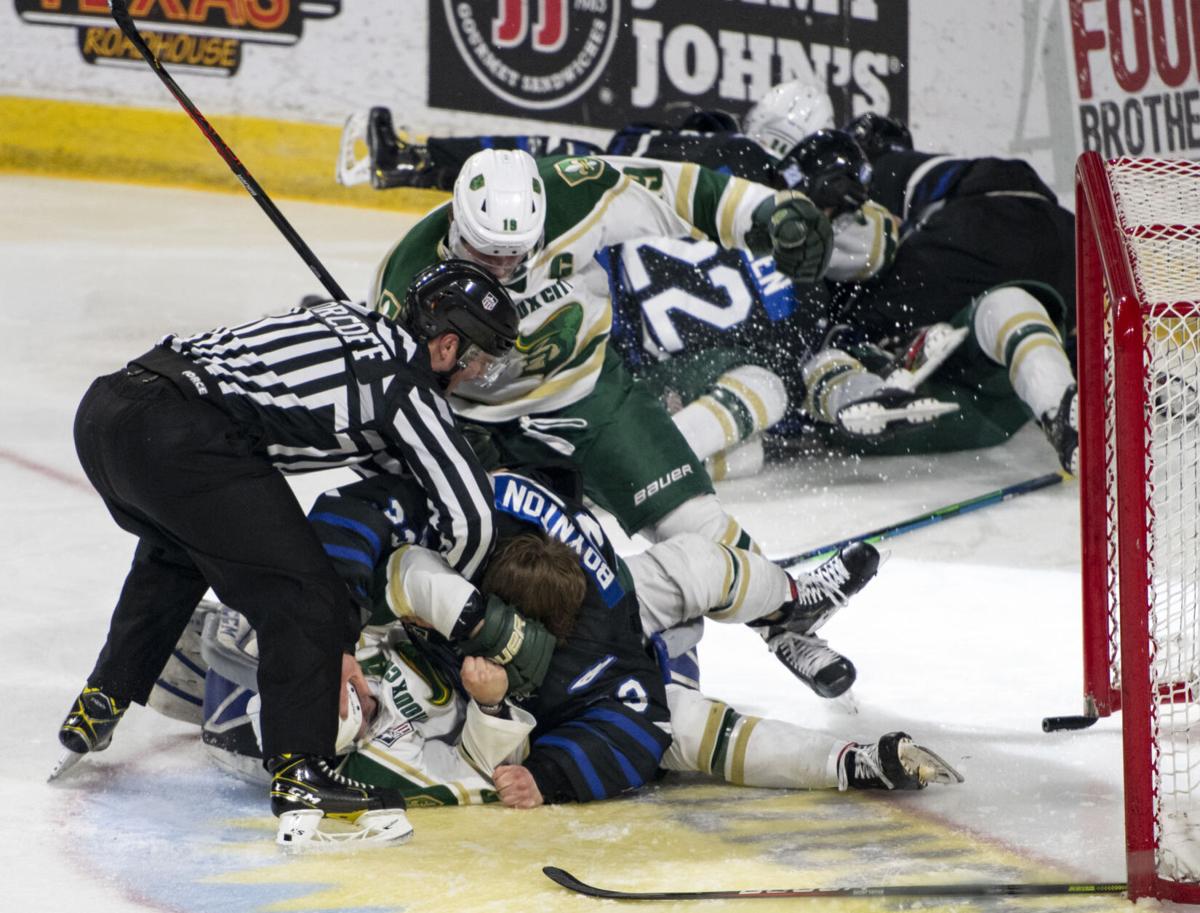 Sioux City Musketeers players fight with Fargo Force players during a hockey game at the Tyson Events Center May 7.

SIOUX CITY — Luke Strand and the rest of the Sioux City Musketeers front office knew that they had the right pieces, even when the season was headed for murky waters.

The Musketeers stuck with the players they had on the ice, and in return, the players put forth a season that ended in the playoffs.

Sioux City’s season ended with a two-game sweep against the Fargo Force, which ended up taking the runner-up honor during the finals to Chicago.

It happened near the trade deadline.

The season was 20 games old, and Strand noticed that the Musketeers weren’t playing to their potential.

Their record wasn’t all that bad — 10 wins and 10 losses — but Strand knew that better hockey was ahead of them.

In those first few games, there were Musketeers who tested positive for COVID-19, and the team camaraderie just wasn’t there yet.

None of the supervisors of the Musketeers got nervous. They were optimistic about a turnaround.

So, Strand, the team’s coach and director of hockey operations, as well as the front office stuck with the team that they had 20 games into the season.

“You’re always looking for a piece, but if the right piece isn’t there, it doesn’t make sense to get one and jam it in there if it doesn’t fit,” Strand said.

The Musketeers closed the season with a regular-season record of 31-21-1. They scored 63 points, and they had a percentage points amount of .594.

The Musketeers closed the regular season with a 9-1-0 record in their final 10 games.

Akira Schmid had a regular-season record of 22-13-1 and a goals against average of 2.01. He allowed just 72 goals in the regular-season.

Schmid was recently signed to an entry-level contract by the New Jersey Devils.

Strand compared it to the seats on the bus. The players at the beginning of the season weren’t necessarily sitting in the correct seats that would make the proverbial bus drive smoothly down the road.

Once the players realized that no one was getting on the bus — or getting off the bus — they knew it was their job to turn the season around.

That turn around came in late February and all of March.

Between Feb. 27 and March 28, the Musketeers won seven of 10 games. The Musketeers were climbing up the Western Conference standings, ever so slightly, but you could notice the team coming together on and off the ice.

Then, starting on March 28, the Musketeers won eight straight games. Most of those wins came against teams they were looking up to in the standings.

“When you understand the why, and what it’s going to take for the whole group, that’s leadership,” Strand said.

The Musketeers qualified for the playoffs as the No. 3 seed, with the other three seeds in order being Tri-City, Omaha and Fargo from the west.

The Musketeers and Lancers split the eight meetings throughout the regular season, but the Musketeers thought they held the upper hand.

The Musketeers won the last three games in the regular season against the Lancers, and they carried that over into the two-game sweep in the conference semifinals.

In that 2-1 series-clinching win on May 2, several Sioux City fans filled Ralston Arena, and Hryckowian scored the winning goal during the third period.

Fargo came into town for the first game of hte Western Conference Finals, and the tone was set right away by the Force.

That bus ride was a tough one, and Strand wanted to coach them one last game.

Before the Musketeers made a playoff push, they struggled to find their first win early into the season.

The Musketeers were trailing 3-0 late in the third period during a November game against Waterloo, but Sioux City scored four goals in the final 8 minutes, 16 seconds to come back to defeat the Waterloo Black Hawks 4-3.

The four-goal comeback gave the Musketeers their first win of the season, avoiding an 0-3 start.

“It was an emotional game,” Strand said the day after. “Their work paid off. There was success to be found in what they were doing. We hadn’t had that success yet, and when it happened, it happened multiple times, that’s a big momentum shift.”

The Musketeers were on a power play midway through the third period, and that’s when Kirklan Irey put the first goal of the night for Sioux City.

“The Irey goal was a big goal for us,” Strand said. “We hadn’t scored a rebound goal in the whole regular season yet. That goal gave us an eye-opener.”

Hryckowian then chipped away at the Musketeers’ deficit, as he scored with 3:37 left to go in the game. Irey, as well as Griffin Ludtke, had assists for their firsts within the first three games.

Sioux City tied the game at 3-3 just 71 seconds later. Bennett Schimek scored his first goal of the season. Nikita Krivokrasov and Daniel Laatsch had the assists on that play.

The Musketeers capped off the comeback with the game-winner from Brian Carrabes with 1:58 remaining.

SIOUX CITY — Kirklan Irey got his wish: He wanted to be the captain for the Sioux City Musketeers for the 50th anniversary season.

OMAHA-- The Sioux City Musketeers beat Omaha by a single goal on Saturday night, as a crucial third period goal from Ben Steeves powered the M…

SIOUX CITY — For the Sioux City Musketeers, there is no place like home.

'I don't want to do anything else:' Passion for the game drives Muskies' Charlie Schoen

SIOUX CITY — This past weekend was a special one for first-year Sioux City forward Charlie Schoen.

OMAHA — Due to mechanical issues with the ice rink at Ralston Arena, the Omaha Lancers’ home opener scheduled for Friday has being postponed.

Lamar Jackson has most wins of any QB under 25

Lamar Jackson has most wins of any QB under 25

Sioux City Musketeers head coach Luke Strand addresses the players at the end of practice on Nov. 5 at the Tyson Events Center in Sioux City.

Sioux City Musketeers players fight with Fargo Force players during a hockey game at the Tyson Events Center May 7.