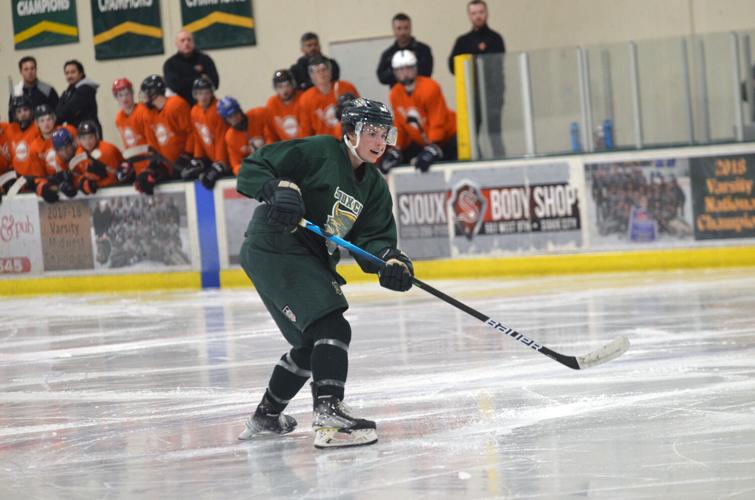 Musketeers camper Finn Loftus takes a shot for Team Green on Sunday in a scrimmage against Omaha at IBP Ice Center. 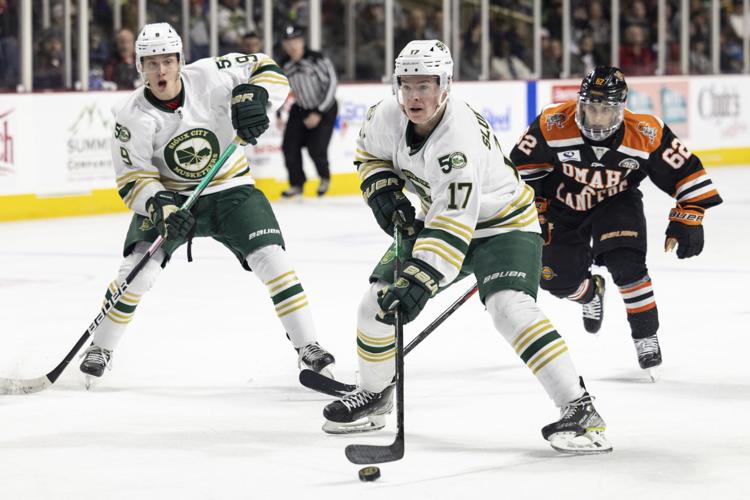 SIOUX CITY — There are eight returning players back for the Sioux City Musketeers this week at their 40-man camp, and those eight have a big task ahead of them.

They are asked to teach the new guys about what it means to win a Clark Cup championship, which happened in the spring for the Musketeers.

Thirty-two of the 40 campers are unfamiliar faces at the camp, but one of the returners – Grant Slukynsky – has been pleased to see the young guys gel with everyone else.

“It’s been a great group so far,” Slukynsky said. “They’re young, but they are definitely talented. I think the skill level and the pace they play with. The pace that they play with, we hope to keep it going throughout camp.”

Culture was a big keyword for new coach Jason Kersner, and it has trickled down to the players, especially the experienced ones.

Slukynsky said that it’s up to the returning players to enstill that culture that the Muskies have hammered home throughout the years.

“It’s important to show the young guys the ropes,” Slukynsky said. “We have to make sure that they’re improving every day.

“It’s time to turn the page from last year,” Slukynsky said. “What we did with last year was great, but it’s a new group this year, and we’re going to try to accomplish the same thing. We’re ready to get the season going.”

"It's important for the guys who were here last year to set the tone and let everyone know how we're going to run it," said Brown on the team's social media pages. "You're either in the way or you have to get out of the way. Everyone is enjoying it. We're working hard."

Sioux City's Team Green beat Sioux Falls 5-3 on Monday in a split-squad scrimmage, but the Stampede beat Team Grey, 5-2, in the nightcap at IBP Ice Center.

Brian Nicholas and Ben Poitras each had a good day Sunday at the Sioux City Musketeers 40-man camp.

Both skaters scored goals in a twinbill split against the Omaha Lancers. The Lancers won Game 1 4-3, while the Musketeers won the nightcap 8-1.

Nicholas played in the first game of the doubleheader as a member of Team Green. Nicholas, who also had an assist on Max Strand’s first-period goal, is a 6-foot-1 left-handed skater.

He played for the North Jersey Avalanche 16U last season, and he has already committed to Michigan. Nicholas was an affiliate player this past season and played in four games with the Musketeers.

Nicholas even had an assist during the championship season last year.

“It’s awesome just to meet the guys on the team and get a couple of games under our belt,” Nicholas said. “I need to get me feet under me, get out of the summer hockey mode and to help build some chemistry with the team.”

“We have a lot of skilled individuals who can play together really well as a team,” Nicholas said.

Poitras scored twice during the third period for Team Grey in Game 2.

He is listed at 5-foot-11 from Toronto, and he’s committed to Northeastern.

Like Kersner said at his introductory press conference on Thursday, the newest Musketeers coach sat in the stands while assistant coaches Mike Fanelli and Colten St. Clair coached behind the bench.

For him, it was just looking at strengths and weaknesses for players. He saw some good individual efforts, and he saw some things he'd like to tweak with the players.

"There's definitely a lot more to do, we've had just two practices," Kersner said. "I'm expecting these guys to be better (Monday). We have 40 guys here and we have to get down to 25. This is a nice head start."

The former West Sioux High School QB finds himself on the cusp of a full season of snaps for the younger-than-usual Iowa State Cyclones.

Having already committed to play at North Dakota, Costantini instead spent his first year post-draft with Sioux City in the USHL, scoring seven goals with 15 assists in 37 regular-season games.

“I’m just happy to be back with the guys,” .@SiouxCityXs pitcher Matt Pobereyko said. “These guys, the coaching staff, the players, they’re all my friends. We stay in contact, whether I’m here or not. It’s just a smooth transition."

Musketeers camper Finn Loftus takes a shot for Team Green on Sunday in a scrimmage against Omaha at IBP Ice Center.