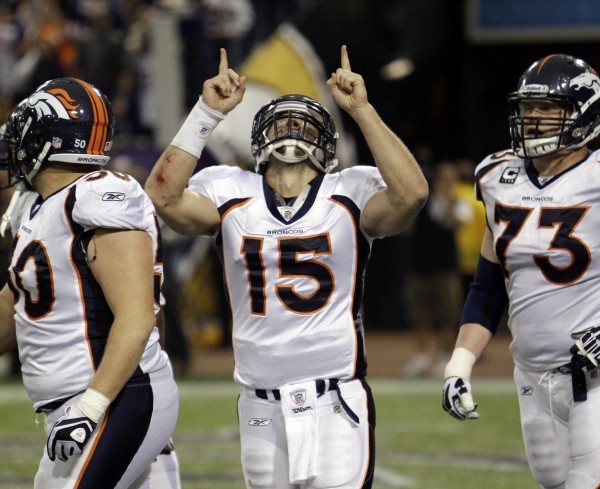 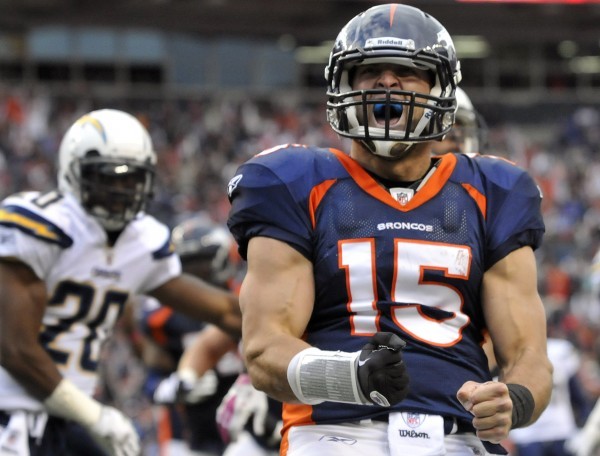 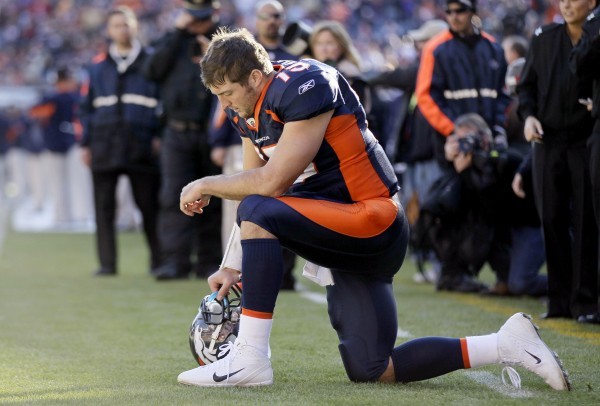 Denver Broncos quarterback Tim Tebow prays during a football game against the Chicago Bears in December. Rachel Bird, a senior at Kingsley-Pierson High School, took a cutout of Tebow to prom. 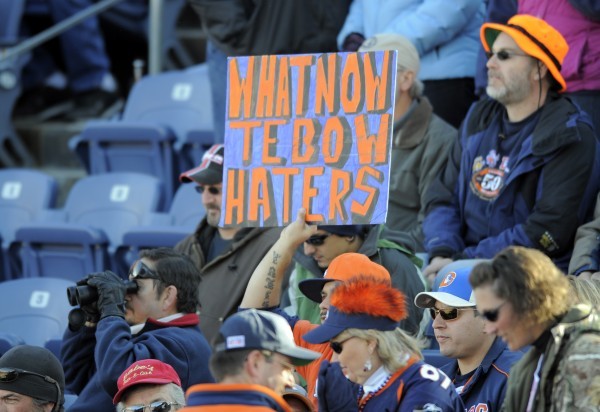 A Tim Tebow fan shows their sign during an NFL football game between the Denver Broncos and the Chicago Bears.

SIOUX CITY -- God may not be a Denver Broncos fan.

But Bishop R. Walker Nickless sure is.

His beloved Broncos don't trump Mass, though -- which is why Nickless won't get to watch his team face the mighty New England Patriots on Sunday.

He'll be dedicating the new church in Ida Grove, Iowa, instead.

"It's funny, people must (check scores) during church, because they'll usually come up and tell me what happened afterward," the Bishop of Sioux City said, adding, "They must be looking at it during my homily."

Indeed, Tebow-mania is spreading -- even to church pews.

Tim Tebow, the unconventional, charismatic and candidly Christian quarterback for the Denver Broncos, has led his team from NFL cellar-dweller to division leader -- all while sparking an intense spiritual debate and stealing headlines that would make Brett Favre jealous.

"The real thing about Tim Tebow is that he's a genuine person, a genuine man of faith and he's very proud of it," said Nickless, a lifelong Broncos fan who was born and raised in Denver. "Everyone's called to use their talents the best way they can, and he's certainly doing that in a dramatic way that seems to inspire lots of others."

Emphasis on the dramatic.

Written off by NFL experts for his weak arm and physical traits more suited for a fullback, Tebow has somehow quarterbacked the Broncos to six straight victories. His season highlights include a half-dozen comebacks, three overtime triumphs, and a whole lot of genuflecting on the football field.

Now, there's even a name for it: "Tebowing," which has been recognized by the Global Language Monitor website as "the act of taking a knee in prayerful reflection in the midst of an athletic activity."

How widespread is the Tebow phenomenon?

At Thursday's GOP presidential primary debate in Sioux City, Rick Perry cocked back his arm, tossed an imaginary football and said he hoped to be "the Tim Tebow of the Iowa Caucuses."

Forget that Tebow completes just 48.5 percent of his passes -- a statistic that'd make high school coaches cringe. There's no arguing with the Broncos' 7-1 record since he became the starter.

All those miraculous rallies behind their "Mile-High Messiah" have some wondering -- does God favor the Broncos?

Nickless chuckles a little at the thought.

He doubts there was an "Angels in the Outfield"-like force that came down from above last Sunday and flicked the ball out of Chicago running back Marion Barber's grasp in overtime (even though Barber hadn't fumbled in his previous 308 carries). He doesn't think a divine force levitated Matt Prater's game-winning, 51-yard field goal through the uprights moments later.

"No, God does not care whether a football team wins or loses -- that's for sure," Nickless said. "What's important is people using their talents and abilities the best they can."

Tebow's ability has been questioned, but he's also drawn criticism for using football as a platform to share his beliefs.

The son of Baptist missionaries came under fire his senior year at Florida, after starring in a pro-life Super Bowl commercial with his mother Pam -- who rejected doctors' advice that she abort her pregnancy with Tim when she developed an infection in the Philippines.

The ad drew complaints from the National Organization for Women, among others, before it even aired. When the spot did finally air, viewers saw only vague references to any pro-life agenda.

"He wanted to say more than I think they let him say, in terms of -- his mom really did save him from an abortion and he's very, very committed to that," Nickless said. "When you think about what a volatile issue that is, and how Catholics and committed Christians are saying we can't continue to kill, he might be controversial -- not only because of his faith, but because he believes in life. And he's defending life.

Where, then, to draw the line?

Two-time MVP quarterback Kurt Warner, who thanked Jesus on national TV after winning the Super Bowl in 2000, advised Tebow to tone down the religious rhetoric a bit in the Arizona Daily Republic: "I don't want anybody to become calloused toward Tim because they don't understand him, or are not fully aware of who he is. And you're starting to see that a little bit."

Nickless agrees there's a fine line between sharing your faith and coming on too strong.

"Jesus tells us we should pray in secret, that nobody should hear our prayer but God the Father," Nickless said. "But then you go to Matthew 5:16 -- ‘and let our good deeds be shown to all, so that they can give glory to God our heavenly father.'

"We've got to pray behind closed doors and with intimacy to God, but at the same time not be afraid to show our faith," he added. "Yes, it could at some times have a negative impact -- and only Tim Tebow can decide what he's going to do with that."

There's no doubt Tebow's actions carry a lot of weight. When he inscribed "John 3:16," on his eye black in the 2008 national championship game, Google reported more than 90 million searches on the bible verse (The NCAA has since banned players from writing messages on their eye black, a law now commonly referred to as the "Tebow rule").

Such laws -- along with the backlash to Tebow's Super Bowl commercial -- exemplify those who don't want their sports served up with a heaping helping of faith.

But, as Nickless points out, the two often go hand-in-hand.

"We look for all kinds of ways to share the gospel of Jesus Christ, and sports is big for people -- especially young people -- and we can use that as a vehicle to help talk about the message of the Lord," he said.

On a grander scale, The Fellowship of Christian Athletes, the world's largest sports ministry, involves an estimated 2 million people per year.

And in 2004, Pope John Paul II created a "Church and Sport" office of the Vatican to promote the values of sport in Catholic culture.

"The Holy Father, and pastors and Christians know that sports can be a way to evangelize people," Nickless said.

"Whether he lasts or not as a quarterback, is not as important as helping us see that there are some good things happening in life," Nickless said, "and this is a diversion that can help us appreciate the goodness of God."

Sunday has the makings of quite the diversion, when three-time Super Bowl champion New England heads to the Mile High City.

Somebody will probably let him know as he's leaving Mass.

Sports and the bible

Do faith and football go hand in hand? These following athletic references are found in the New Testament:

"Do you not know that the runners in the stadium all run in the race, but only one wins the prize? Run so as to win. Every athlete exercises discipline in every way. They do it to win a perishable crown, but we an imperishable one. Thus I do not run aimlessly; I do not fight as if I were shadowboxing. No, I drive my body and train it, for fear that, after having preached to others, I myself should be disqualified." - 1 Corinthians 9:24-27

"Therefore, since we are surrounded by so great a cloud of witnesses, let us rid ourselves of every burden and sin that clings to us and persevere in running the race that lies before us." - Hebrews 12:1

"Just one thing: forgetting what lies behind but straining forward to what lies ahead, I continue my pursuit toward the goal." - Philippians 3:14

A glance at Denver's six comebacks since Tim Tebow became the starter:

Tebow leads two late scoring drives in the final 2:53 and scores a two-point conversion to tie the game. Matt Prater's 52-yard FG in OT wins it.

Trailing 24-14 late in the third, Tebow throws two touchdowns as the Broncos reel off the final 24 points.

Tebow leads a 95-yard drive and runs for a game-winning, 20-yard TD with 58 seconds left.

Tebow connects with Decker on a crucial 3rd-and-11 during the game-tying drive, capped by Prater's 24-yard kick that forced OT. Prater also hits the game-winner from 37 yards out.

Trailing again in the 4th quarter, this time 29-21, Willis McGahee scores a 24-yard TD run and Tebow punches in the two-point try. The Vikes get a FG, but Prater answers with two of his own -- including a 23-yarder as time expires.

Down 10-0 with 4:34 left, Tebow finds Demaryius Thomas for a TD, Prater boots a 59-yard FG at the end of regulation and nails a 51-yarder in OT after Marion Barber fumbles away the Bears' opportunity to win it.

Denver Broncos quarterback Tim Tebow prays during a football game against the Chicago Bears in December. Rachel Bird, a senior at Kingsley-Pierson High School, took a cutout of Tebow to prom.

A Tim Tebow fan shows their sign during an NFL football game between the Denver Broncos and the Chicago Bears. 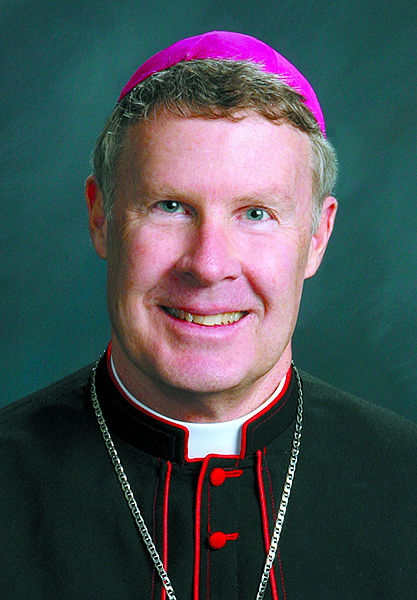