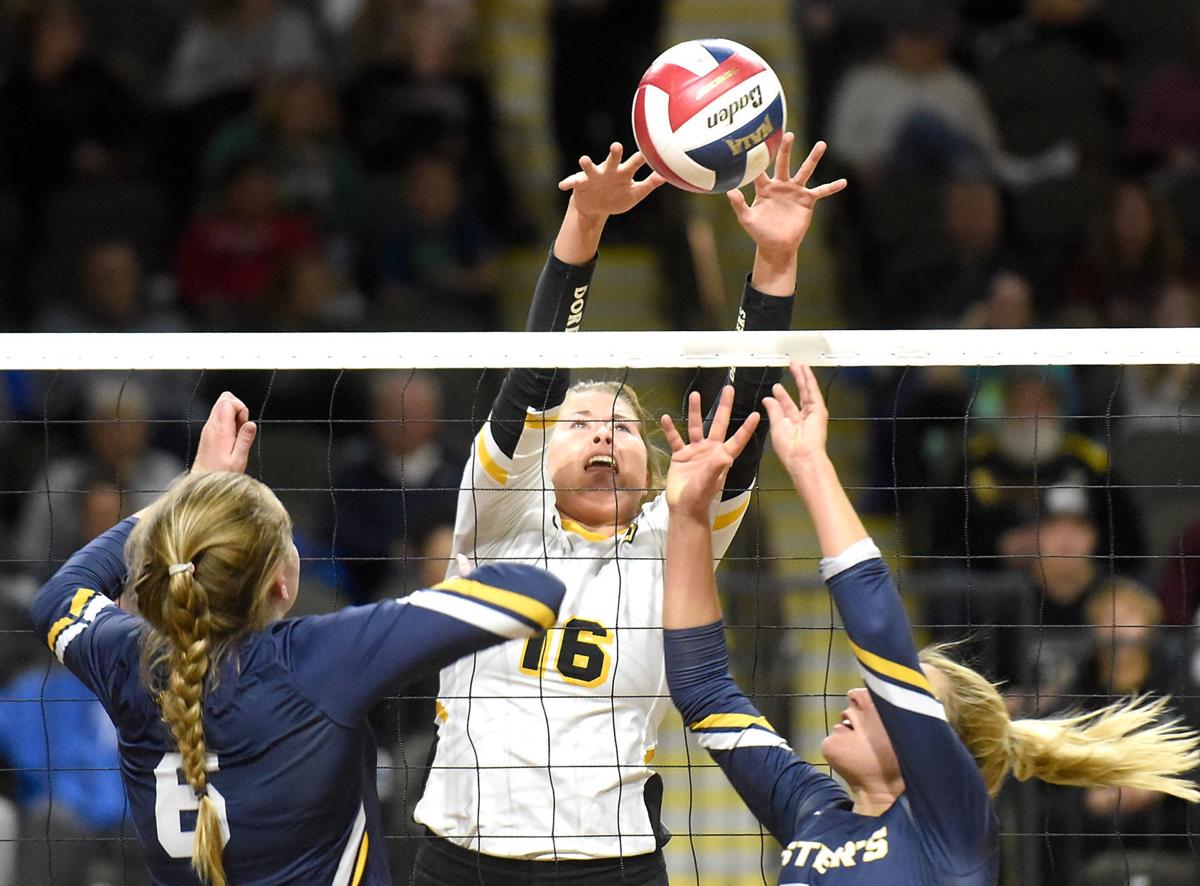 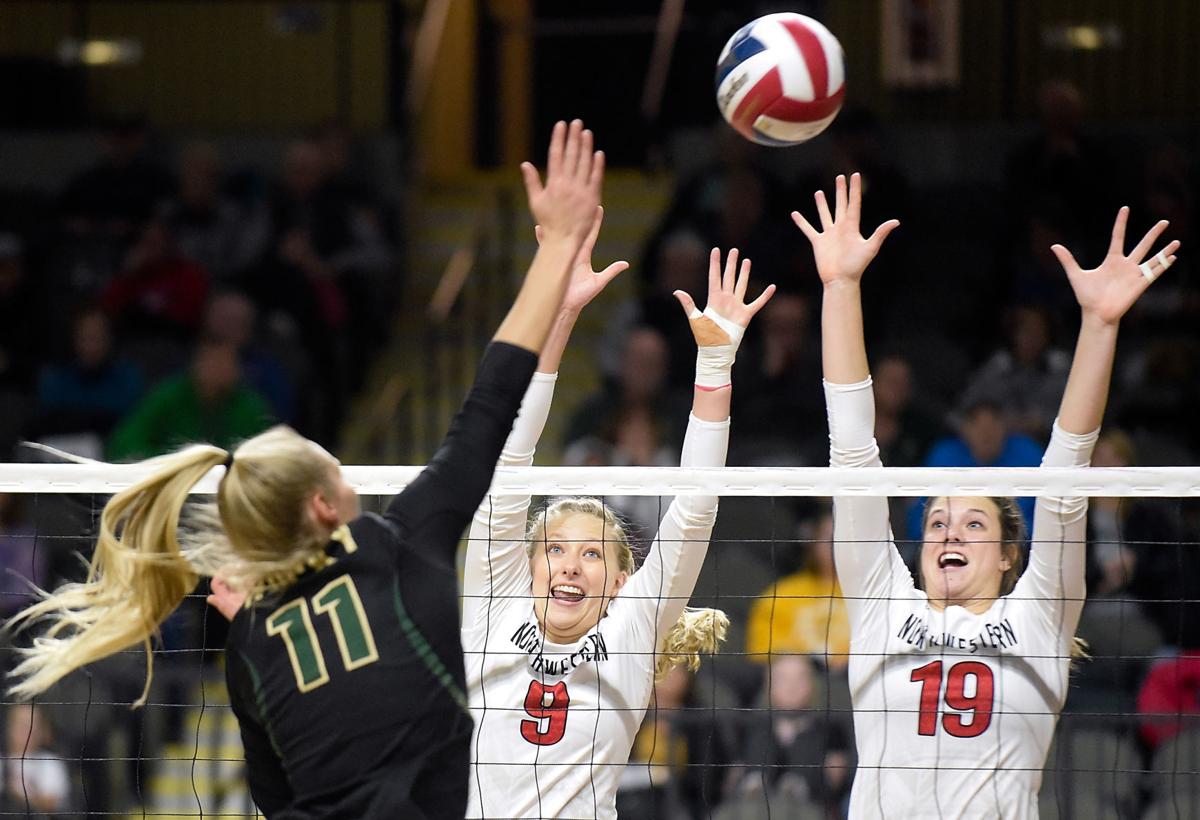 SIOUX CITY - Grand View wrapped up first place in Pool A with a 25-22, 25-21, 27-25 win over the Yotes in the final day of pool play at the NAIA Volleyball Championship at Tyson Events Center Thursday.

Kelsey Redmond had 15 kills and Meagan Miller 13 more kills to lead the top-ranked Vikings, who improved to 35-0 in matches this season.

Grand View will open first-round tournament play Friday morning at 9 a.m. against the second place team in Pool B, which had not been determined at The Journal's publishing deadline.

College of Idaho also advanced as runner-up in the pool and will take on the winner in Pool B at 1:30 p.m. Ashley Pagan had 13 kills to lead the Yotes (24-9).

Ally Ginkens had 10 kills while Lucy Skoch and Danielle Bruha added nine each for Hastings, which moved to first round tournament action with a 21-6 record, will play next in a first round elimination match at 11:15 a.m. against the runner-up in Pool C.

Missouri Baptist (33-5) will also move into elimination round play and face Midland at 3:45 p.m. The Spartans got a match-high 17 kills from Mallory Moran who has 40 after three matches in Sioux City.

Lindsey Wilson (32-3), the defending champions, got 15 kills from Klara Mikelova and 14 from Sarah Cruz and will advance to take on the Pool E runner up at 3:45 p.m. Friday.

Hailee Ackerman had 12 kills to lead Eastern Oregon, which will also move to tournament round action taking on the Pool E winner at 11:15 a.m.

Jaclyn Rozell had 14 kills to lead the Saints, who improved to 35-8. Kamelah Noel had nine kills to lead Vanguard, which lost all three of its pool play matches.

Ellie Michaletz and Isabel Wedell had eight kills each to lead the Jimmies, who will be involved in a playoff later Thursday to earn the right to advance to elimination play Friday. Kate Bontrager had 11 kills and Helena Atton 10 for St. Xavier, now 28-12.

The V-Hawks' Hannah Erickson had five service aces, including back to back service winners in the fifth set to close out the match. Katie Frohmader had 16 kills and Lydia Xu added a dozen more for the winners. Nila Lukens had 15 kills and Makayla Hoyt 14 kills for Southern Oregon (28-4).

Viterbo, Southern Oregon and Jamestown were involved in playoff matches later Thursday to decide the two teams to advance to elimination play out of Pool G.

The loss was the first of pool play for Midland, which ended in a three-way tie with Columbia and Aquinas (Mich.) atop the pool. Jenny Bair and Priscilla O'Dowd had 14 and13 kills, respectively, for Midland.

Lauren Brown had 13 kills while Kelsey Shaver and Sydney Anderson both had 10 kills for Providence (23-11). Alyssa Gibson had a dozen kills for Milligan (26-9). Both teams were eliminated from advancing to first round playoff competitiion Wednesday.

The win sets up a potential playoff for the final spot in the pool as both teams have won one match. A win by Rocky Mountain over Northwestern would leave the Raiders also with one win. Lexi Kite had 12 kills while Leia Seiler added 11 and Riley Bradbury had to to lead McPherson (34-4). Skyler Van Note had 16 kills for a match high to lead Marian (30-7).

Corban will advance to first round elimination play after the win while Reinhrdt ends with a 1-2 record. Avari Ridgway had 12 kills for Corban (22-13). Cheetara Bing also had 12 kills for Reinhardt (35-8).

Westmont had a balance attack that featured Samantha Neely who had 15 kills while Hali Galloway, Casside Rea and Brooklyn Cheney each had 14 kills.

Morningside got a match-high 18 kills from Emma Gerber and 16 from Krista Zenk but faltered in the fifth set, hitting at a -.143 attack percentage.

The Eagles were down two sets but fought through back to back 25-23 wins to force a decisive fifth set. Emily Charboneau had 16 kills and Tesaa Colden a dozen more to pace Reinhardt. Regan Tate and Jane Cisar had 12 kills apiece for the Master's.

SIOUX CITY -- Hungry Tyson Events Center patrons are greeted by an unfamiliar group of concession stands, all with new names and some new food…

Morningside was picked to finish in sixth place in the GPAC preseason coaches poll. Every team ahead of Morningside in the poll, including Northwestern and Dordt, is ranked nationally.