SIOUX CITY – The parity in American Association baseball’s South Division has been quite a godsend for the Sioux City Explorers, the division champ three of the last four years.

And the X’s have gotten away with plenty of shortcomings as the 100-game season nears the midway mark.

Sooner or later, though, a sluggish offense has to come together if manager Steve Montgomery’s team is going to reach the league playoffs for the fourth time in five years.

Veteran righthander Angel Ventura blanked the Explorers for the first five innings and came four outs from a complete game as the X’s first meeting ever with the Milwaukee Milkmen became a 6-1 loss Tuesday night at Lewis and Clark Park.

“We dug ourselves a hole (with a 9-16 start) and we just have to keep digging,’’ said Montgomery, who was ejected late in the contest along with pitching coach Bobby Post and centerfielder Kyle Wren. “No need to panic.’’

Tied for first place in the South coming into the game, Sioux City slipped to 22-21 and fell one game behind Cleburne, improving to 23-20 with its seventh win in a row.

Retiring the first 13 batters he faced, Ventura had a no-hitter when Adam Sasser, Deture McCall and Drew Stankiewicz strung together three straight one-out singles to load the bases in the fifth inning. 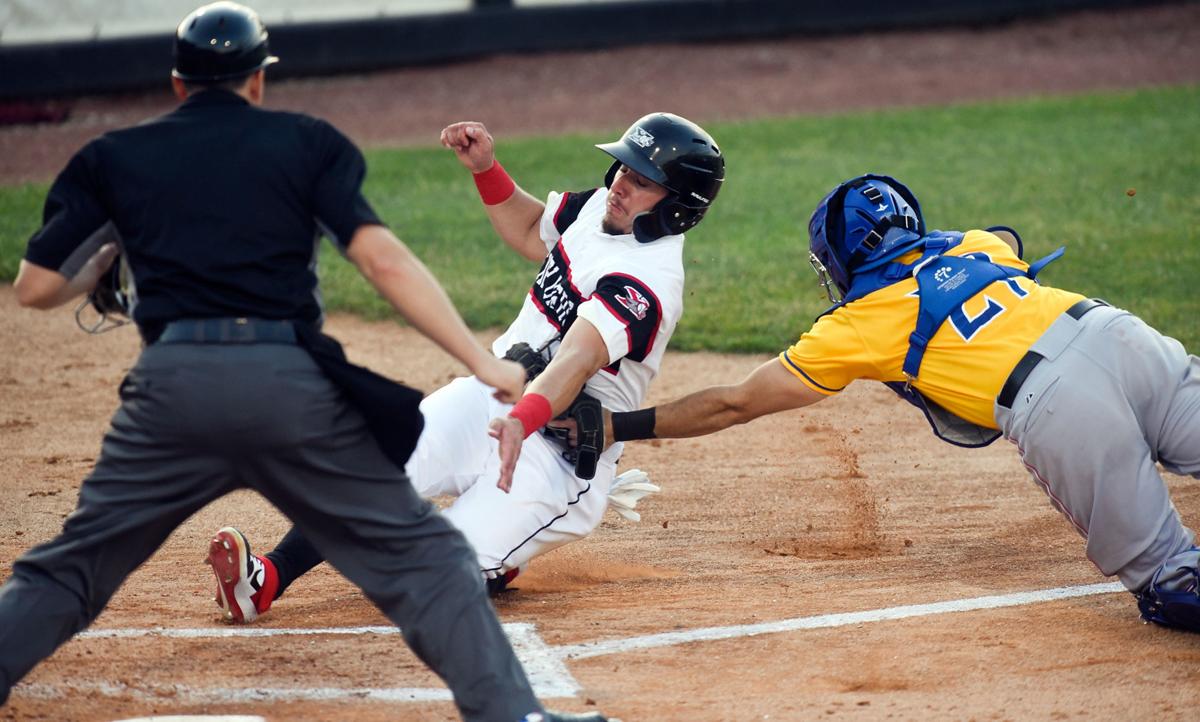 Sioux City Explorers' Sebastian Zawada is out at home by Sioux Falls Canaries' Adrian Nieto during a baseball game in Sioux City on June 21, 2019. 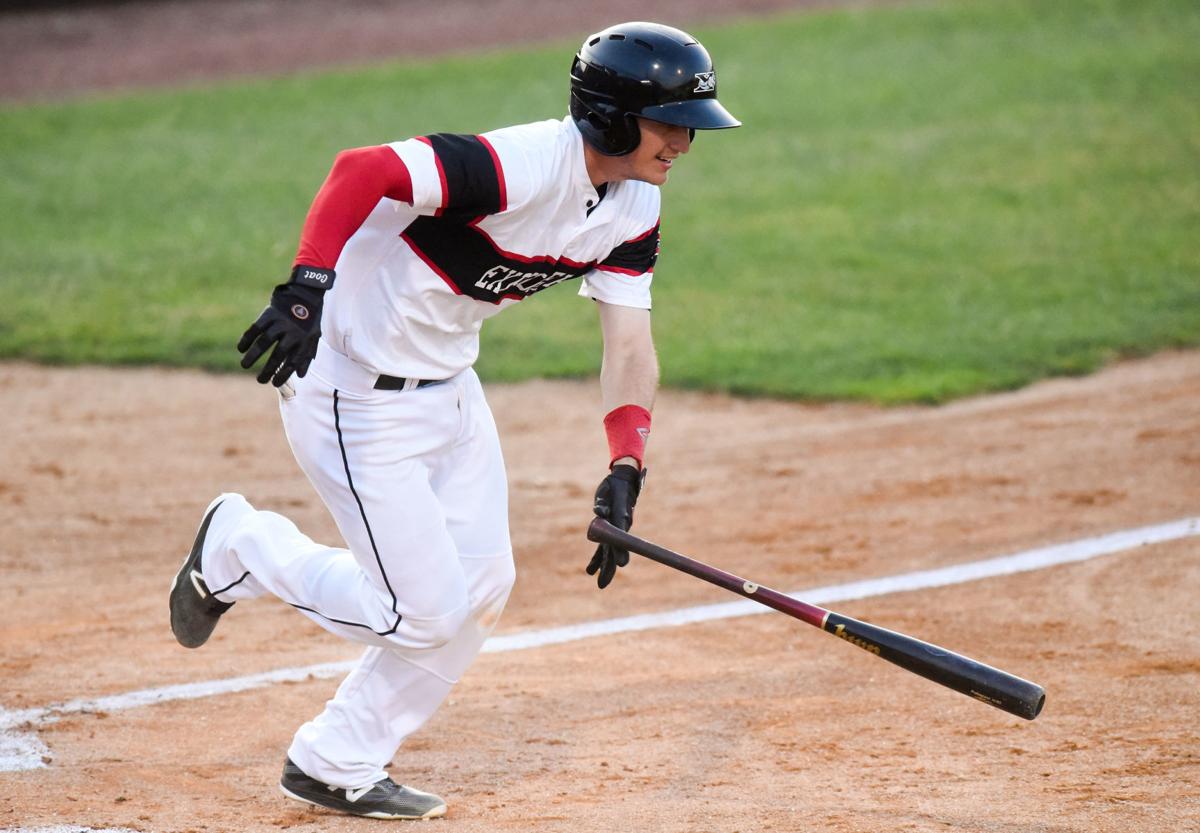 Sioux City Explorers' Nate Samson gets a hit against Sioux Falls Canaries during a game in Sioux City on Friday, June 21, 2019. 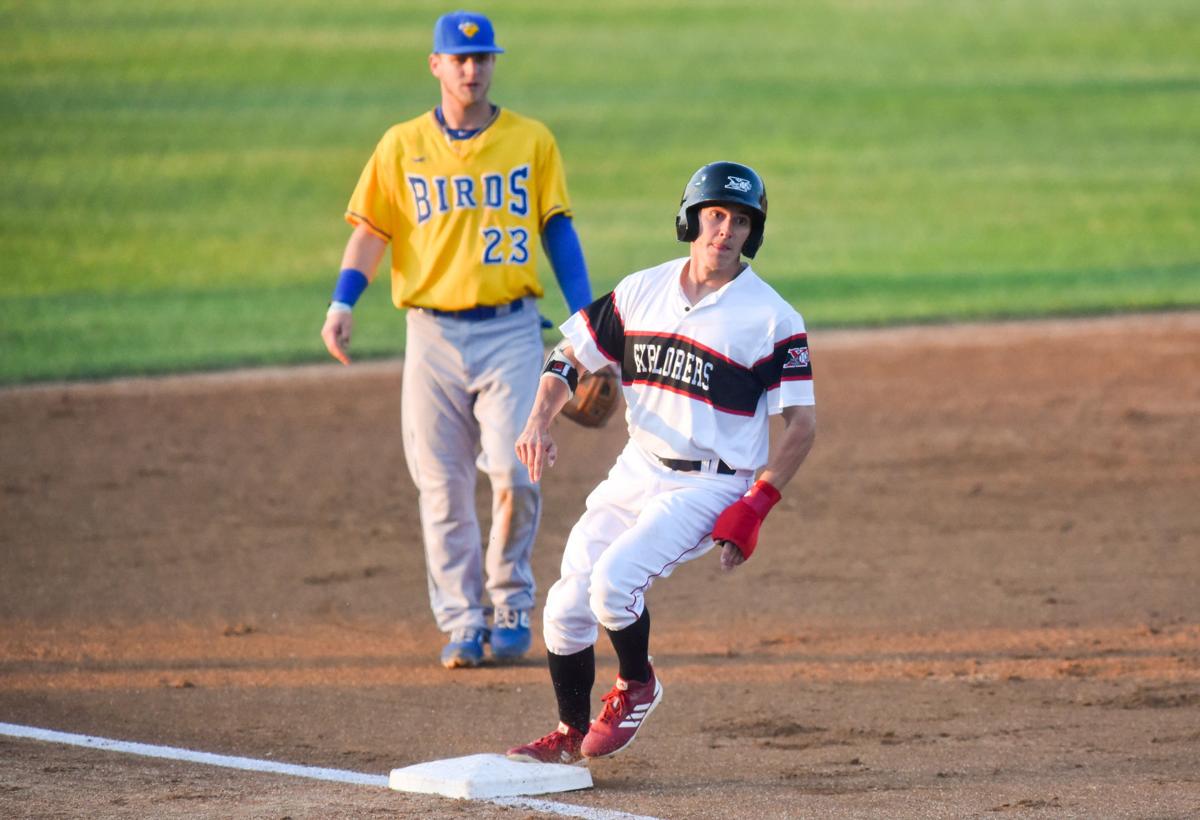 Sioux City Explorers' Kyle Wren gets on third base as Sioux Falls Canaries' Jordan Ebert looks on during a baseball game in Sioux City, Iowa on Friday, June 21, 2019. On Friday, the Explorers announced they will not play in 2020. 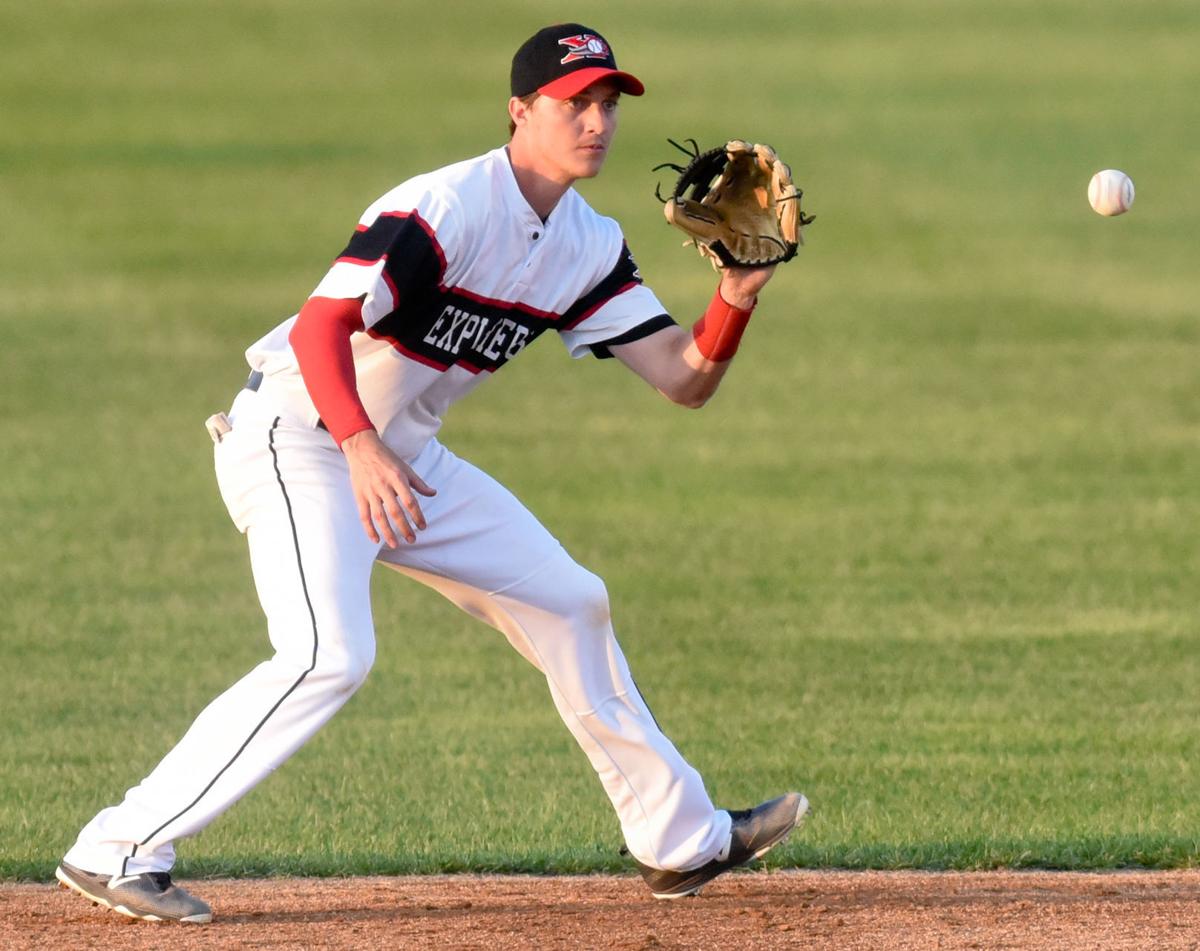 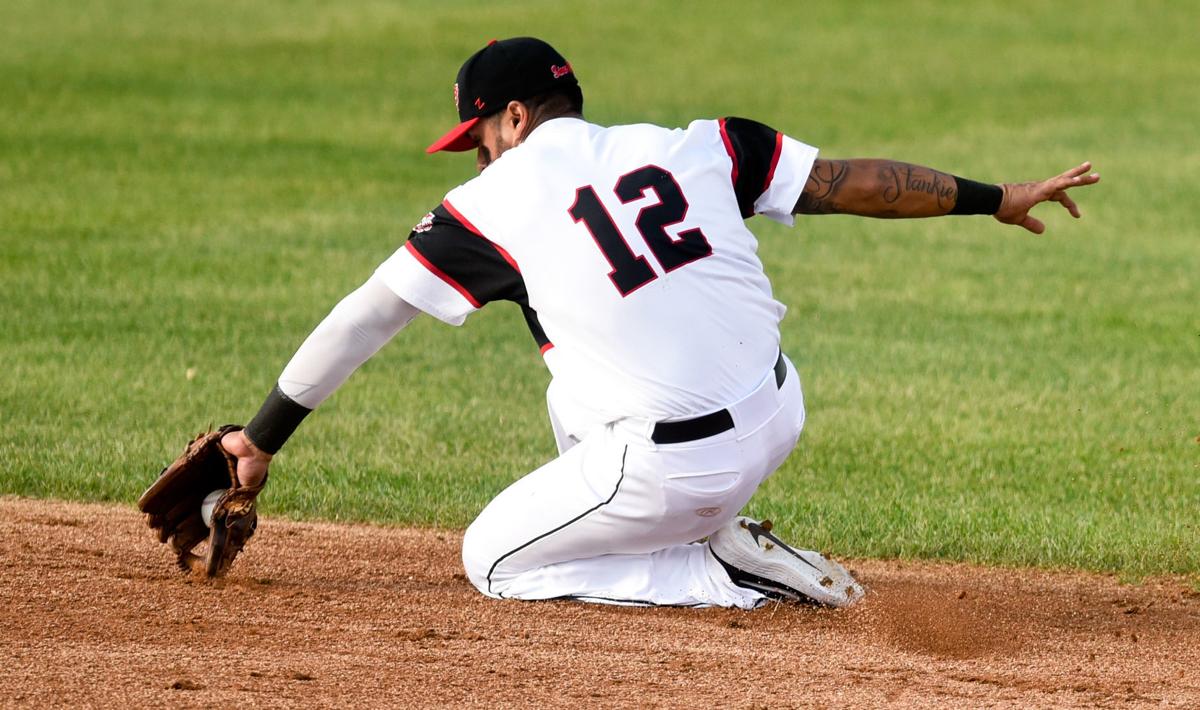 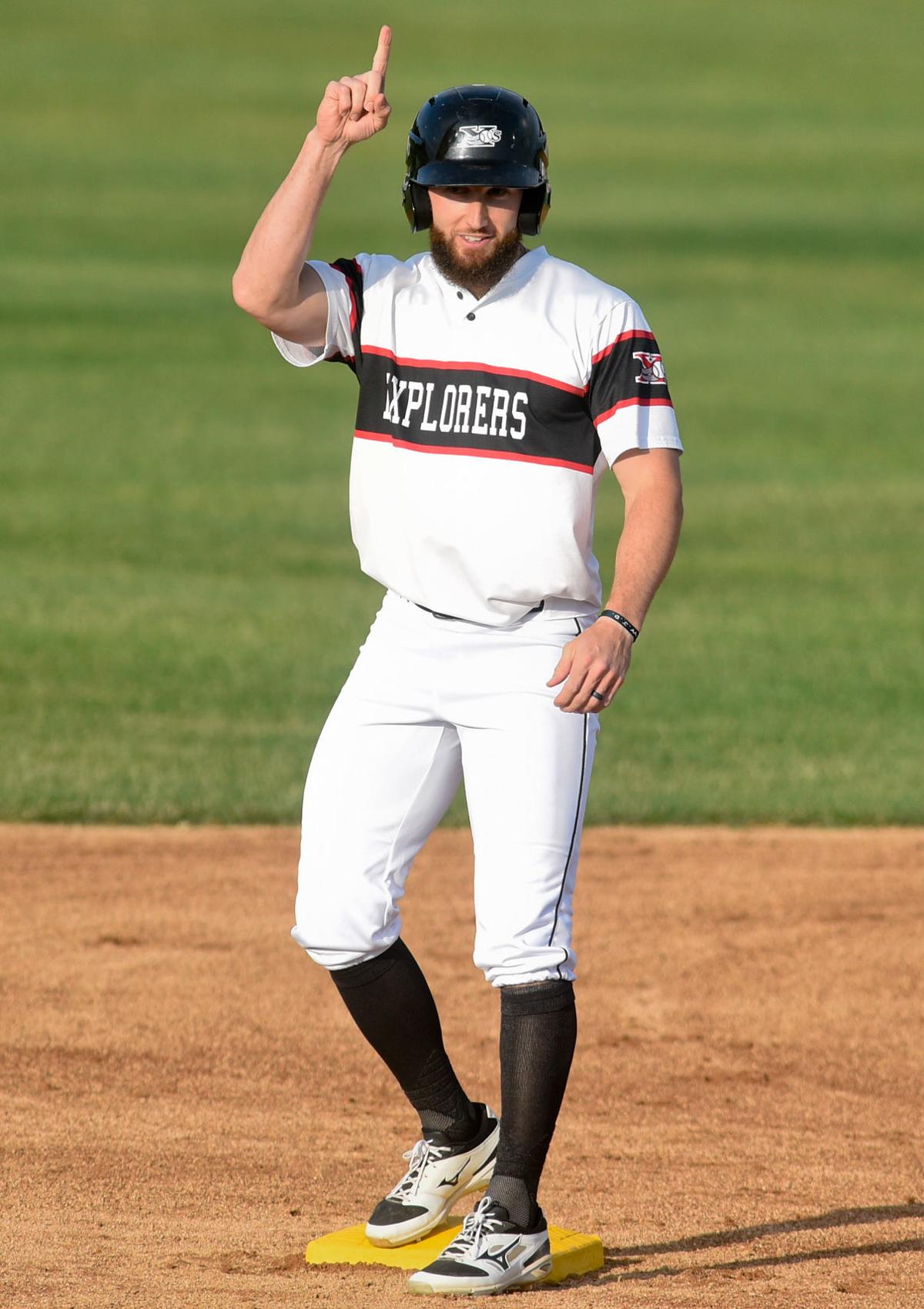 Sioux City Explorers' Michael Lang celebrates after getting on second base during a baseball game against Sioux Falls Canaries in Sioux City, Iowa on Friday, June 21, 2019. Sioux City Journal Photo by Justin Wan 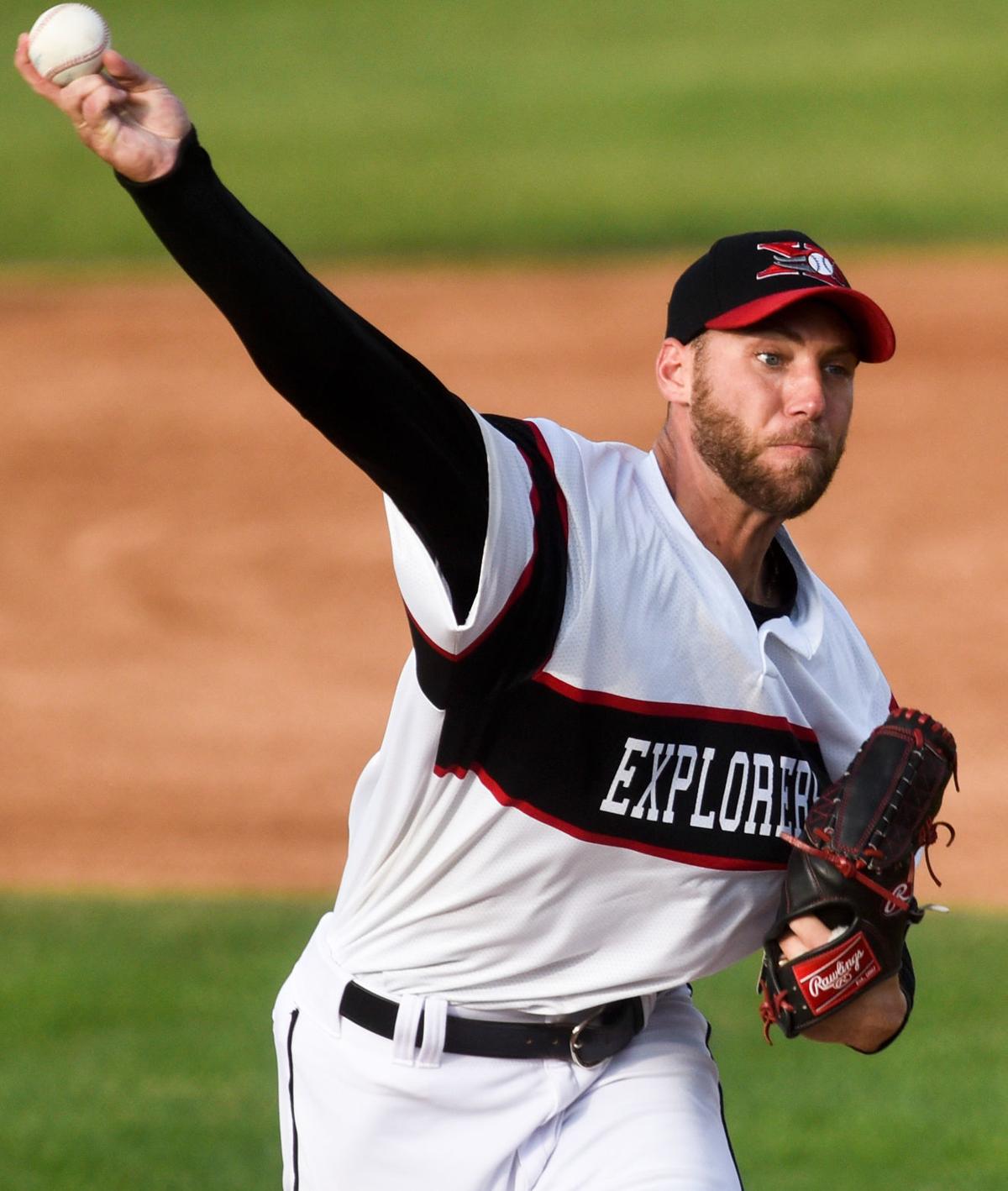 Trailing 5-0 already, though, the Explorers left all three runners stranded after Sebastian Zawada popped out and Dylan Kelly bounced into an inning-ending groundout.

Milwaukee came into the contest with the second worst record in the 12-team league at 17-25, last in the six-team North Division after losing nine of its last 12 games.

The guests, though, were in charge from the outset, scoring three times in the top of the first after X’s starter Eric Karch walked two of the first three batters he faced.

Jose Rosario followed those free passes with a run-scoring double and Nolan Earley came through two batters later with a two-out, two-run single to left field for a 3-0 lead.

Milwaukee, which plays its home games in suburban Franklin, Wis., made it a 5-0 lead with two runs in the fifth. Jeff Chandler reached on a leadoff walk and then the Milkmen scored twice on consecutive one-out singles by Cesar Valera, Garrett Copeland and Manuel Boscan, the first three batters in the order. 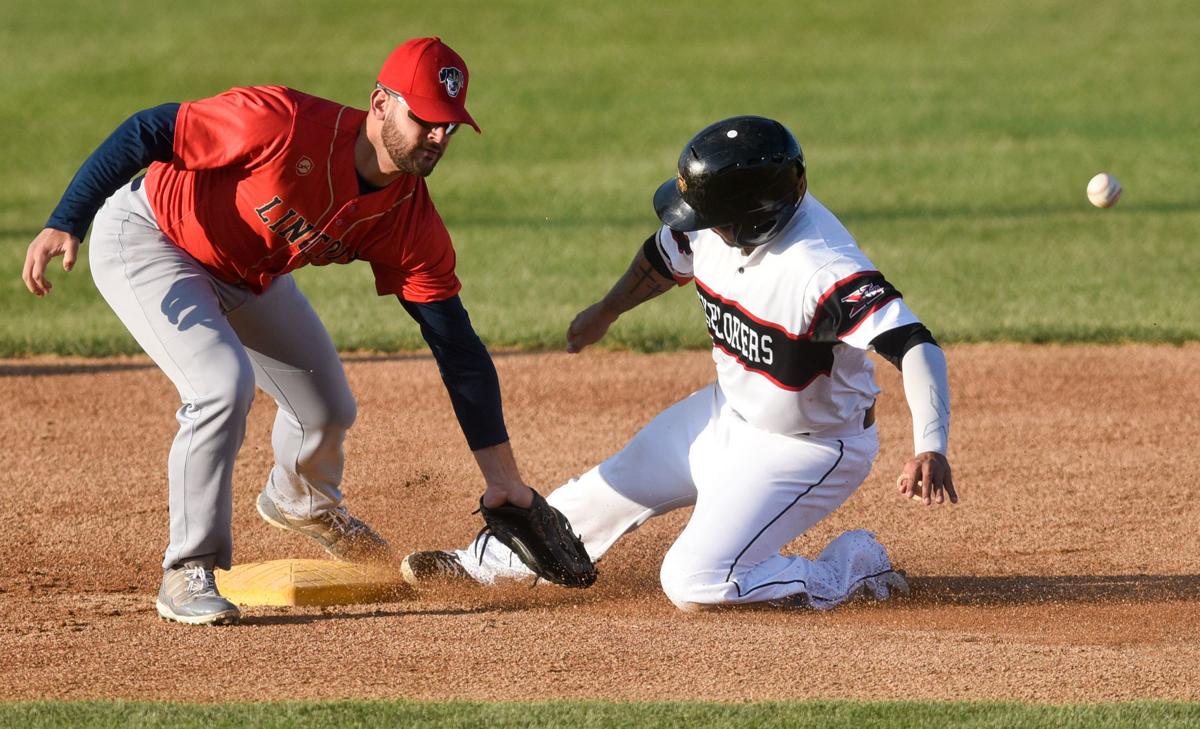 Sioux City Explorers' Drew Stankiewicz gets to second base safely during a baseball game in Sioux City, Iowa on Wednesday, June 12, 2019. 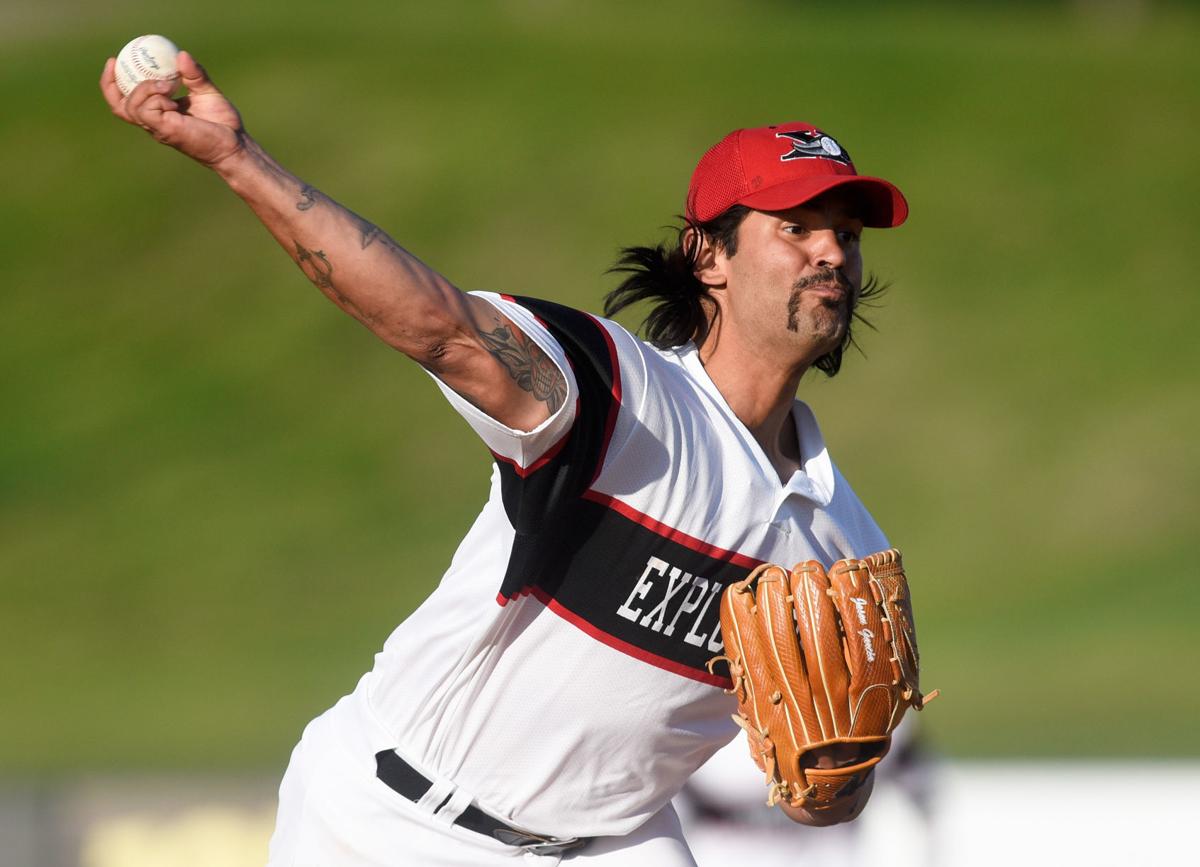 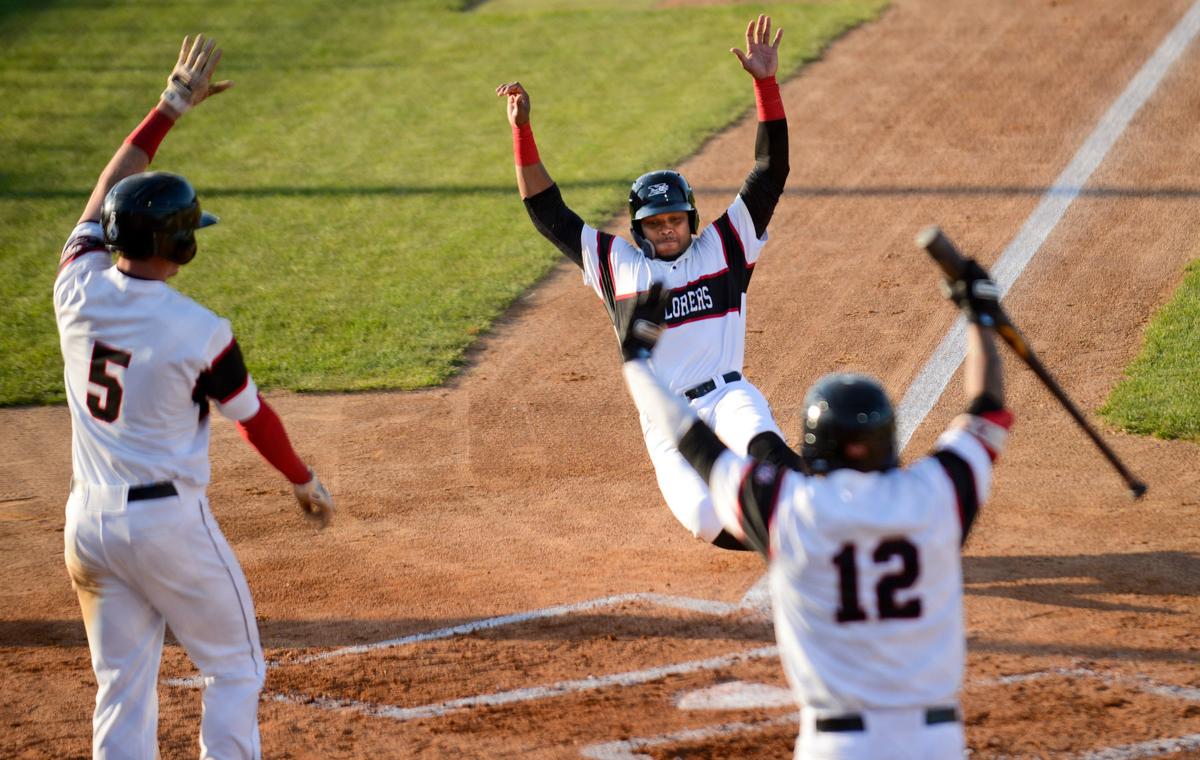 Sioux City Explorers' Jose Sermo scores a run against Lincoln Saltdogs during a baseball game in Sioux City on June 12. 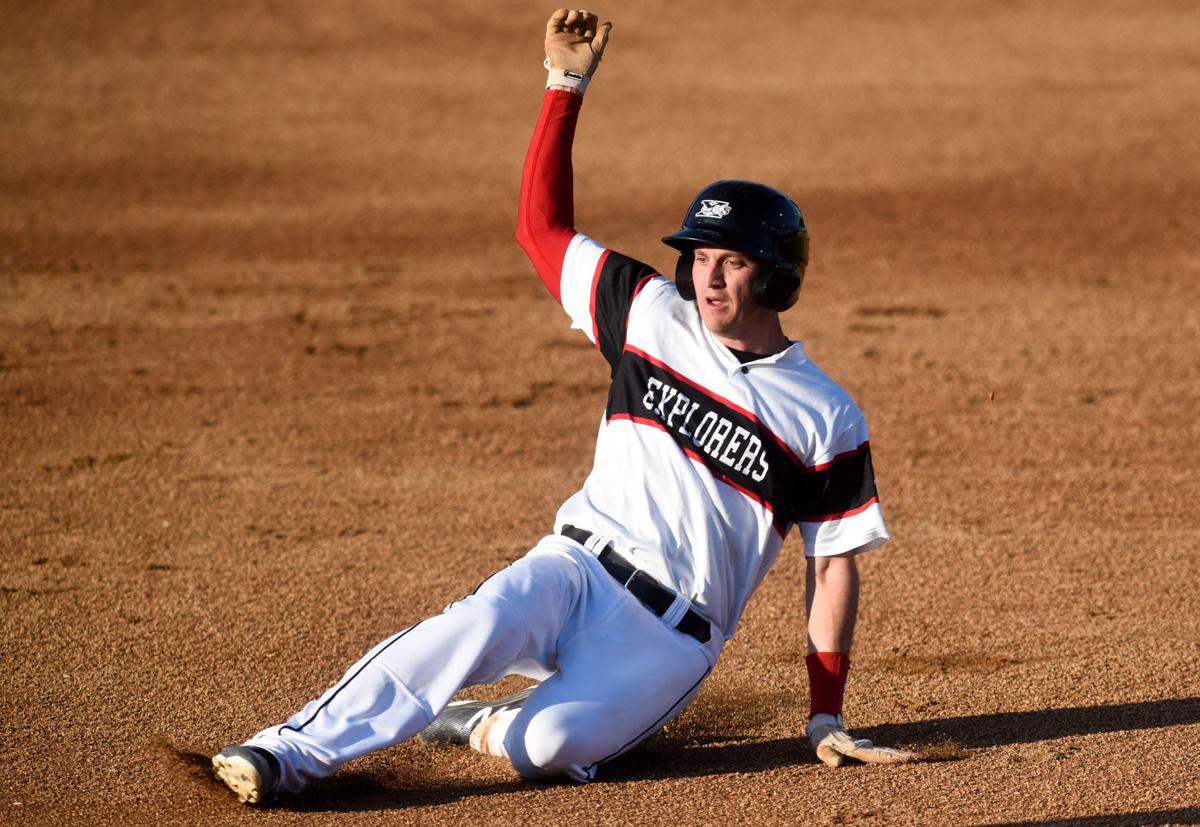 Sioux City Explorers' Nate Samson slides to third base during a baseball game against Lincoln Saltdogs in Sioux City, Iowa on Wednesday, June 12, 2019. 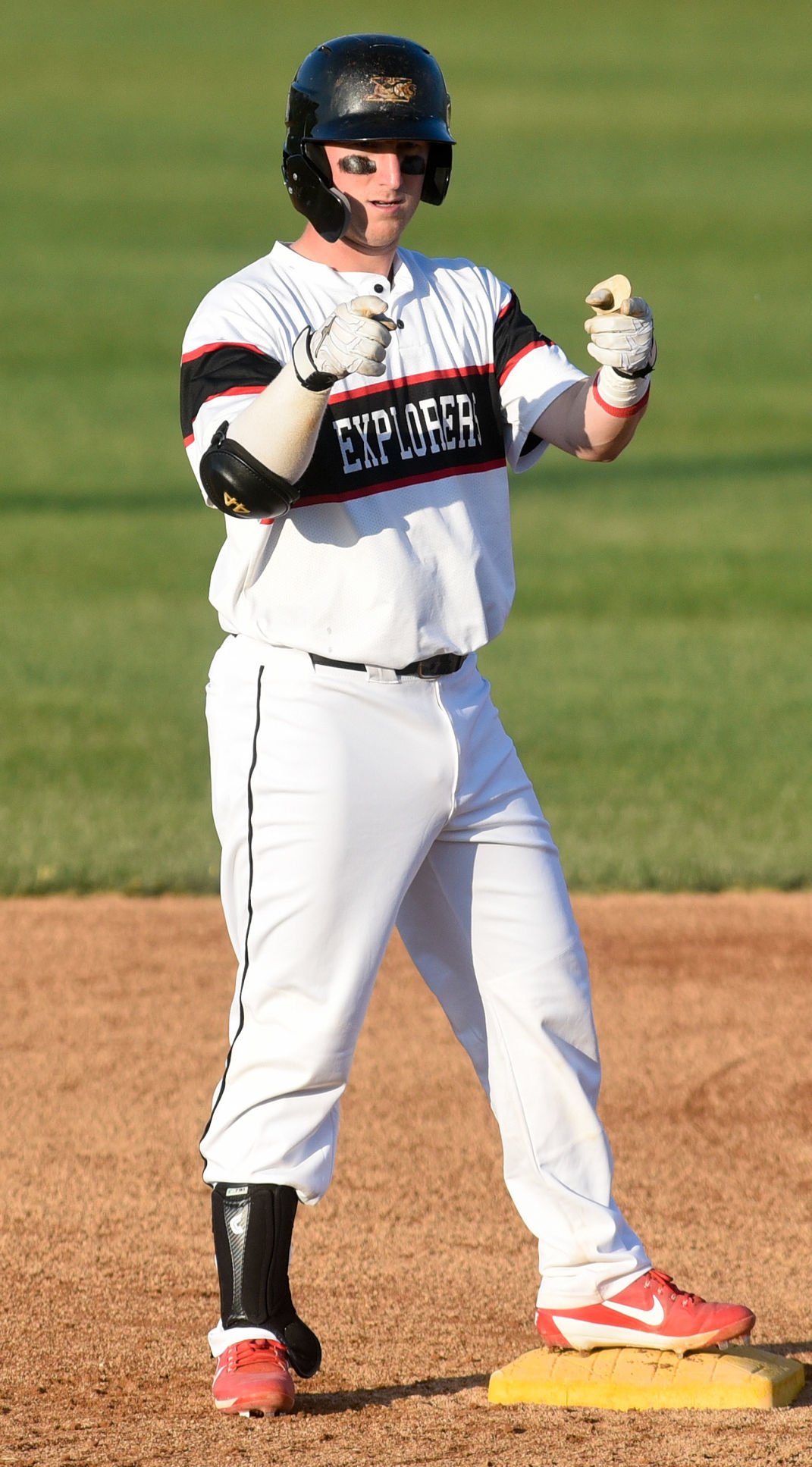 Sioux City Explorers' Dylan Kelly celebrates after getting to second base safe during a baseball game against Lincoln Saltdogs in Sioux City, Iowa on Wednesday, June 12, 2019. Sioux City Journal Photo by Justin Wan 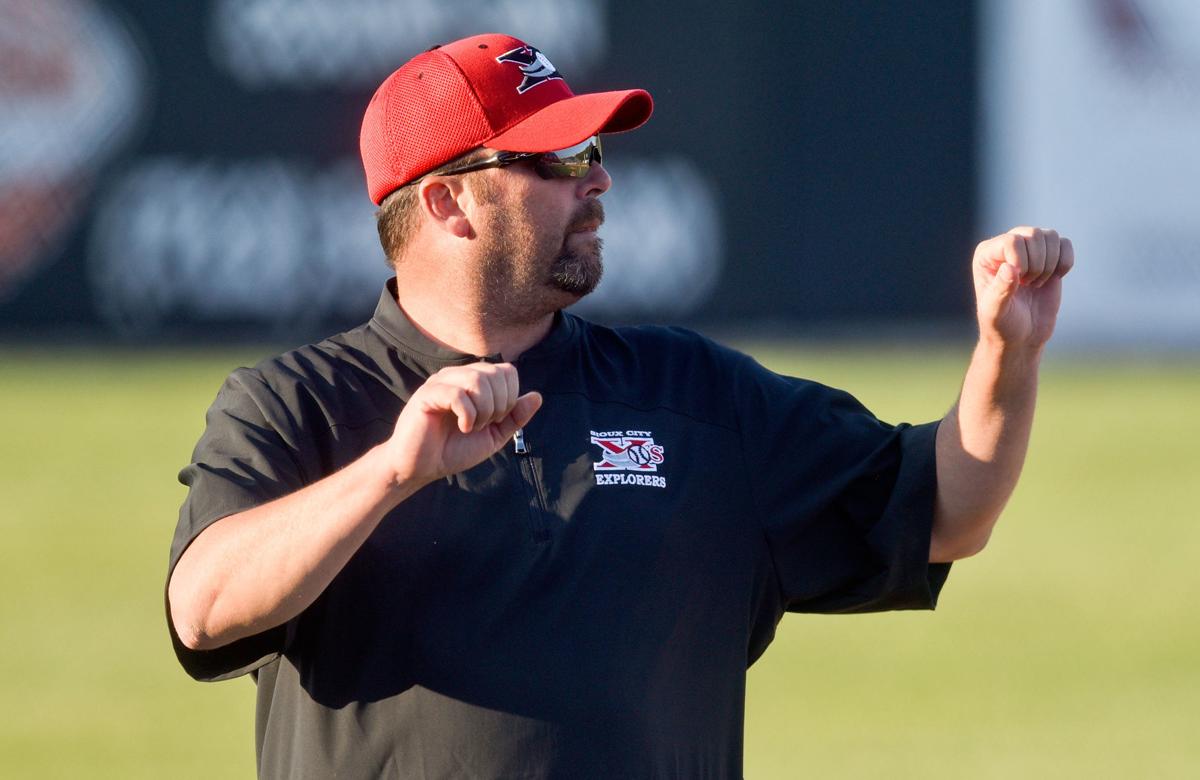 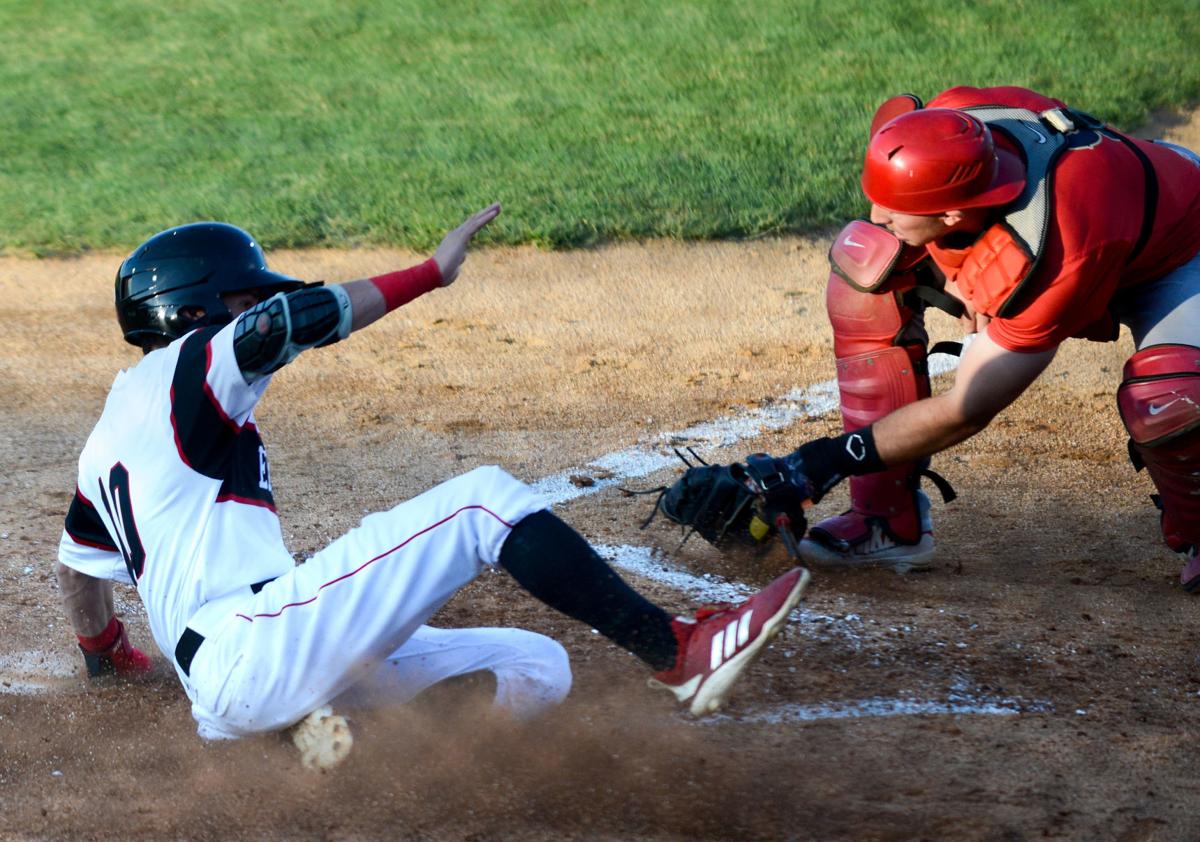 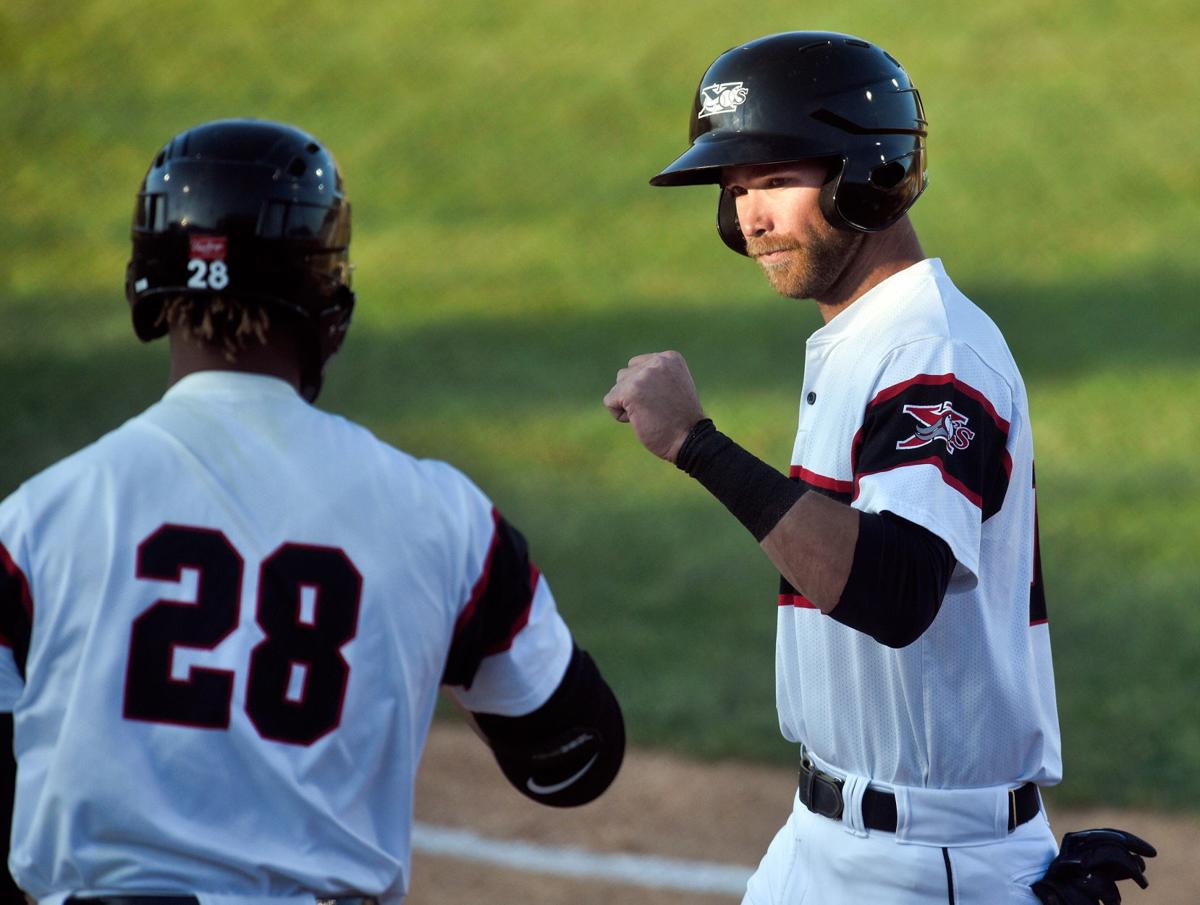 Glen McClain, who entered the contest with a team-worst .170 batting average, led off the top of the sixth with a double to left-center, his second hit of the night. Chandler bunted him to third and then Sam Dexter’s sacrifice fly hiked the lead to 6-0.

Blanked 3-0 Sunday in Lincoln, the X’s last start, the hosts finally got on the board with an unearned run in the home half of the sixth. Michael Lang’s one-out double made that possible, but it took a throwing error to get the veteran rightfielder home.

Lang moved to third on Nate Samson’s ground ball out and looked dead to rights after Boscan, the catcher, caught him wandering too far off the base. The pickoff throw by Boscan, however, was wild and Lang trotted home with the run.

Like the squandered fifth-inning rally, the X’s failed to deliver again after starting their seventh-inning with a walk to Sasser and a base hit by McCall. Ventura, though, struck out Stankiewicz, retired Zawada on an infield dribbler and got an inning-ending grounder off the bat of Dylan Kelly. That’s when Montgomery was ejected, prompting a lengthy rebuke of home plate umpire Jacob Keefauver.

Keefauver’s disfavor with the X’s became even more apparent when Wren watched three called strikes to open the eighth inning – the fourth strikeout in as many at-bats for the centerfielder. Wren was promptly tossed after arguing the call and then Post also got the hook with a vigorous protest.

Ventura, who pitched the last eight seasons in the Milwaukee Brewers’ farm system, advancing to the Triple-A ranks, came into the game with a hard-luck 2-5 record despite a reputable 3.62 ERA.

Karch, who has pitched well enough to win as many as five of his seven previous starts, fell to 0-4 after an eight-inning performance in which he threw 123 pitches, tops for the season for the Explorers.

The X’s had one out and a runner on base when the stadium lights failed in the final half-inning. After a 20-minute delay, play resumed and they loaded the bases with two outs, all on walks, before reliever Jake Joyce finished it up.

Since winning 11 times in a 12-game that sent them to 20-17, the Explorers have lost four of their last six contests prior to Wednesday. Like it was in the team’s early season struggles, the story has once again been a lack of offense. In those last six games, the X’s have totaled 26 runs and 20 of those have come in a 13-8 victory last Friday in Lincoln….

Tuesday’s game was the fourth in a row that has seen neither Sioux City or its opponent record a double play. For the X’s, who tied a league record with six twin killings in a May 18 loss to Lincoln, there had not previously been as many as two consecutive games without at least one double player for either the X’s or their opponent….

Seventh-year Sioux City rightfielder Michael Lang, who recently battled through a nightmarish 2-for-40 skid, has gone 7 of 23 in the last five games through Tuesday, raising his batting average 19 points to .274. Meanwhile, centerfielder Kyle Wren has run into a tailspin over the last three games, going 0-for-11 with nine strikeouts…

Reliever Tyler Fallwell drew the start Wednesday with Taylor Jordan skipping his turn in the rotation due to an injury. With Jordan shut down and Jason Garcia getting picked up by the Tampa Bay Rays, the Explorers also have lefty reliever Jose Velez, Jr., sidelined for at least a week due to an injury….

Trying to patch up his pitching staff, Manager Steve Montgomery on Wednesday added rookie righthander Nile Ball, a 22-year-old from Decatur, Ga., who finished his college career last year as the closer at Missouri. Ball, a 6-foot, 205-pounder, was 2-1 with six saves and a 3.52 ERA for Missouri in 2018.

SIOUX CITY — Following up three division titles in the last four seasons, the Sioux City Explorers are once again sitting atop American Associ…

SIOUX CITY -- Come for the baseball game and stick around for the free donuts, $1 hot dogs and, heck, even some cool Hard Rock Hotel & Cas…