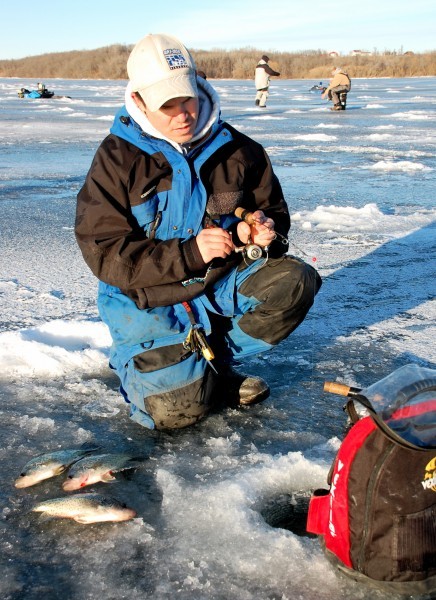 Corey Ewing works his jig for crappies on Pickerel Lake. 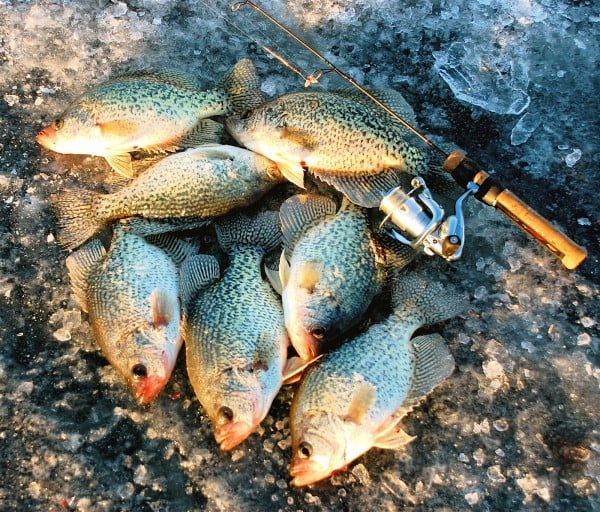 We had to work for them, but as the schools moved through our catch of crappies began to grow. 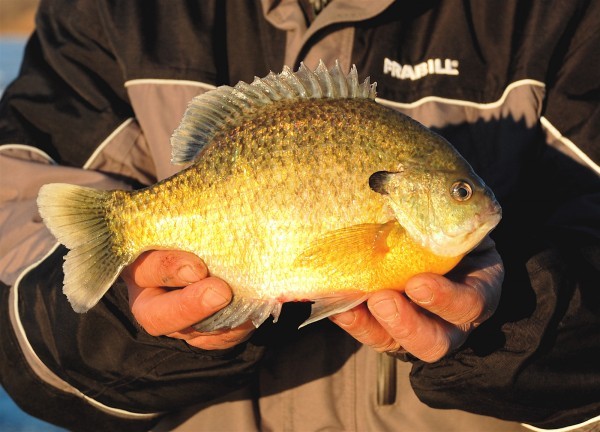 Big bluegills were available, too. We caught them from 9 inches to almost 10 inches. Another angler nearby brought up an 11-incher.

WAUBAY, S.D. - The bite was just a slight nudge but it was enough for me to raise the rod tip and feel the weight of a good fish.

And soon, sliding up the hole through 8-inches of solid ice was my first crappie of the day.

It hadn't come easy. Crappies through the ice on natural lakes are sometimes hard to find. On farm ponds, they often stick near submerged brush or trees. On lakes they often hang around still-green submerged vegetation. And then there are lakes like Pickerel.

The crappies here seemed to be roamers. While they held to the same general area, there didn't seem to by any rhyme or reason for just exactly where they showed up at any given time.

The key, said Corey Ewing of Waubay Lake Guide Service, is to drill a lot of holes and just keep looking.

And this 100-yard square area of lake was littered with holes drilled by fishermen looking for this tasty panfish.

In fact, Corey had fired up our Jiffy Ice Auger and punched a good 25 holes before Gary Howey, Hartington, Neb., and I had even gotten our ice rods untangled and baited up.

Before the afternoon was over, Corey would drill another 25-plus holes, but the effort would be worth it.

Pickerel Lake is a known hotspot for crappies both in open water and through the ice. The last time I had fished here was in September with wife Fran and the lake's fat crappies were our intended target.

Pickerel is a 981-acre lake just a few miles northeast of Waubay and not much more than a mile north of another glacial lake gem Enemy Swim where we had experienced phenomenal smallmouth fishing last October with Corey.

While Pickerel has a maximum depth of 41 feet, the crappies were holding in about 18 to 20 feet at the end of a long, broad underwater point.

And to make matters even more complicated they were suspended, some as shallow as 5 feet under the ice.

It's those kinds of conditions that make using a Vexilar flasher so important to your ice fishing success. We fished our small Lindy Rattl'N Flyer spoons tipped with eurolarva near the bottom but we watched the flasher's dial for fish that might be moving though shallower. When that happened, we reeled the spoons up quickly and held them at the fish's level.

That usually resulted in an 11- to 12-inch black crappie. But the problem was we rarely took more than one fish out of each group. We'd land a fish and then hole hop looking for the school.

There were a half dozen other anglers on the ice doing the same thing.

By the time the sun dipped over the western horizon, we had collected a nice catch of Pickerel's fat crappie and had also brought a couple of big bluegill to hand. I caught one measuring 9-and-a-half inches long that was suspended 10 feet off the bottom. That's kind of unusual for big bluegills.

Pickerel is in my estimation the flagship of the northeast South Dakota's glacial lakes. It's water is crystal clear and it is one of the deepest lakes. It has a good population of walleyes, smallmouth bass, largemouth bass, crappie, bluegill, yellow perch, northern pike and rock bass.

There are three boat ramps and a nice state park campground on the west shore of the lake.

Ice conditions on these northeast lakes is marginal right now. We fished about four lakes on this trip and we had from 8 to 12 inches of good ice. That's thick enough for a four-wheeler but not enough for automobiles. Many lakes in the area still had open water.

If you are going up there, you'd best stop into Sportsman's Cove bait and tackle in Webster and visit with Doug Johnson. He'll clue you in on the lakes that are safe to fish during this unseasonably warm weather we are experiencing.

For more information on Pickerel and other good fishing lakes in the region, go to www.waubaylakeguideservice.com or call Corey at (605) 929-3894.

Corey Ewing works his jig for crappies on Pickerel Lake.

We had to work for them, but as the schools moved through our catch of crappies began to grow.

Big bluegills were available, too. We caught them from 9 inches to almost 10 inches. Another angler nearby brought up an 11-incher.