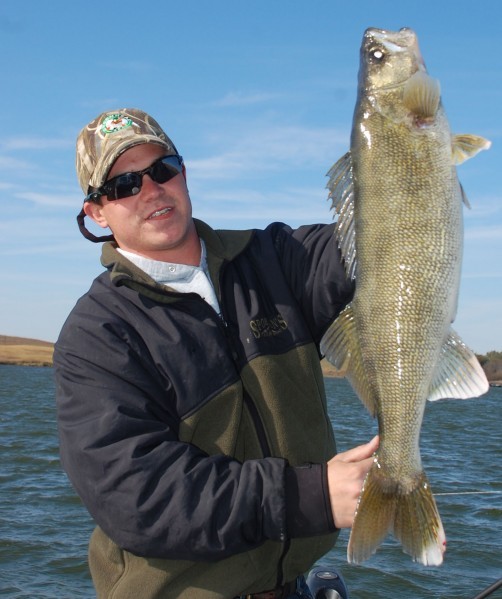 Guide Cory Ewing holds a trophy walleye taken from a lake in the Waubay, S.D. area. Crankbaits and paddletail jigs were used to take our fish. 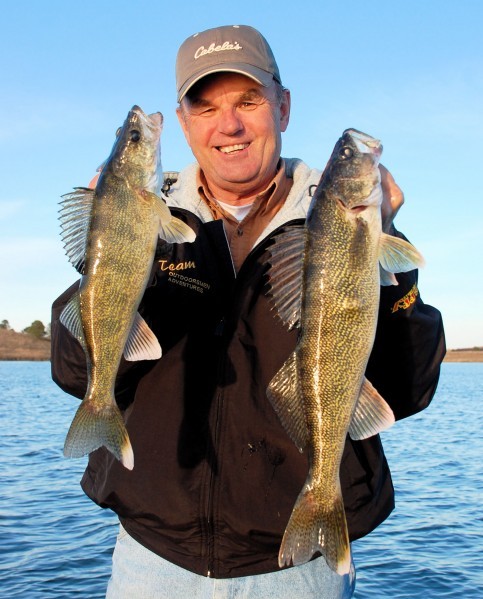 WAUBAY, S.D. - It's been nearly 20 years now that a strange thing began happening in the South Dakota Glacial Lakes region. Water began blossoming from the soil, turning duck sloughs into lakes and small lakes into big lakes and big lakes into huge lakes.

One of the most famous is Waubay Lake, a 15,000-acre-plus walleye, perch and smallmouth factory which was once a big marsh and is today, a sprawling body of water which just seems to get bigger each year.

It's neighbor to the south is Bitter Lake. Like Waubay, it is an excellent walleye lake and getting bigger every year. Today, they tell me, it is the largest natural lake in South Dakota.

If you are an outdoorsman, this place is a paradise. This time of year you can hunt mallards in the morning and fish walleyes, bass or panfish in the afternoon in who knows how many lakes within a 30 mile radius.

For a real eye-opening experience, go on Google maps and type in Waubay, SD and check out the satellite photo. Literally hundreds of bodies of water will come into view, all dominated by Waubay and Bitter lakes.

But wait. Many of these smaller lakes also contain walleyes and perch and perhaps smallmouth and northern pike.

Just how the fish got into many of these lakes, many unnamed and some on private property, isn't known. But they are there and often overlooked.

While there is little reason to venture anywhere beyond Waubay or Bitter, Gary Howey, Hartington, Neb., and I enlisted the help of Cory Ewing, Waubay Lake Guide Service. Our goal was walleye fishing the first afternoon and smallmouth the next morning.

Cory took us to a small, unnamed lake where he had taken walleyes to 9 pounds and many jumbo perch. He said only about a half dozen local anglers knew about this spot and they were not about to divulge its location.

We fished this lake just as we would have any other walleye lake in the region at this time of year,

We began casting number 5 Lindy Shadlings in perch colors against the shoreline. It was slow going at first.

Sometimes you just have to find which shoreline the fish are using.

It took a while but Cory picked up our first fish, a 7-and-a-half pound walleye which inhaled the bait. We caught a few more walleyes on crankbaits, but they really seemed to prefer a jig tipped with a soft minnow imitation in perch colors with a paddletail.

These baits can be deadly on walleyes any time, but especially in late fall. Ironically, few anglers use them, relying instead on twister tail soft baits tipped with a minnow. With paddletails, you don't need live bait.

And don't be afraid to use large baits. Ours were about 4 inches long and if I'd had bigger, I would have tried them.

It may have just been the fact that the sun was getting lower in the sky when we began casting jigs and maybe the walleyes were getting more aggressive, but it's hard to give up on a method when it is producing.

We ended the afternoon with a limit of eating-size walleyes and had turned back a bunch of larger fish.

The next day we would head for Enemy Swim Lake which is just a few miles north of the town of Waubay. It just might be South Dakota's best smallmouth bass fishery right now.

We expected to find the bass grouped up on rock piles and ready to bite on chubs fished on live bait rigs. We were right and will give you the facts next week.

You can contact Cory for fishing reports or guide service at (605) 929-3894 or visit his web site at www.Waubaylakeguideservice.com

Guide Cory Ewing holds a trophy walleye taken from a lake in the Waubay, S.D. area. Crankbaits and paddletail jigs were used to take our fish.