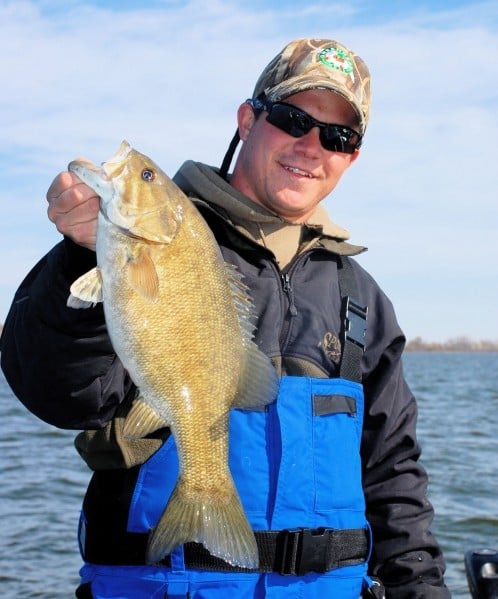 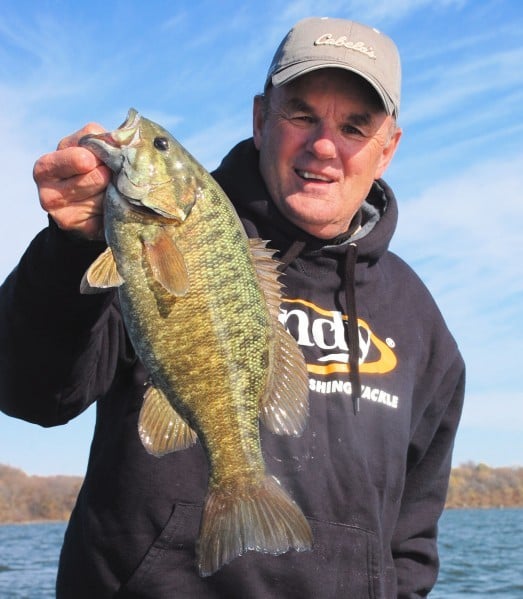 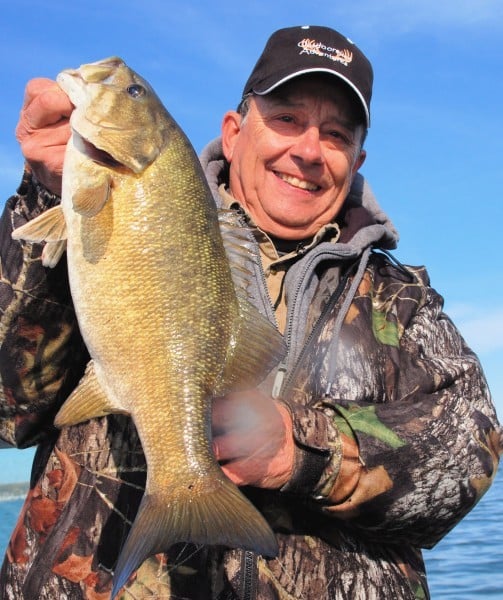 Late fall is one of the best times of the year to fish for trophy smallmouth bass.

WAUBAY, S.D. - Some of the best smallmouth bass fishing of the year is occurring right now. Getting in on the action is simple.

That's what Cory Ewing, Webster, S.D., Gary Howey, Hartington, Neb., and I did recently. We chose Enemy Swim Lake, a 2,146-acre jewel of a lake just a few miles north of Waubay.

Our rigs consisted of medium-action spinning rods spooled with 8-pound-test line. We used Lindy "No Snagg" sinkers, 3/8-ounce, in front of 30-inch snells tipped with a 1/0 short shank hook.

We prefer creek or redtail chubs for this type of fishing, but none were available so we went with 4- and 5-inch sucker chubs hooked through the lips.

It took a while to find a concentration of fish, but Cory found a rock hump which dropped off into 23 feet of water at its base and topped out at about 12 feet.

It was the fastest smallmouth bass fishing I've been into for a long time. Most of the fish ranged from 16 to 18 inches but both Cory and Gary boated fish more than 4 pounds.

We had three dozen chubs with us and we were soon out of bait. One chub I used landed four bass and the chub was dead bait when the fourth one hit.

When bass are in their winter mode, they are very vulnerable. They should be released because a few fishermen keeping limits of bass each day will soon hurt the population.

I recall what happened to Green Lake in Minnesota many years ago. Anglers discovered the deep water hotspots on that lake. This was when no one released fish. The lake was ruined as a smallmouth fishery in about two years. It has since bounced back to beyond its former glory, but that was because of strict regulations which at one time required all smallmouth to be released.

It is strict regulations which is making Enemy Swim and other South Dakota lakes with similar restrictions outstanding bass fisheries.

South Dakota's general daily bass limit is five fish, but there are many exceptions to that rule on lakes in the Glacial Lakes region. You must check the regulations to determine the exceptions.

Enemy Swim, for instance, is an example. Here a slot limit on largemouth/smallmouth bass exists. Bass between 14 and 18 inches must be released and only one bass 18-inches or over may be taken in your five fish limit.

The bass slot limit on Enemy Swim is controversial. Bass have done very well and the former excellent walleye fishing has declined. Locals feel the bass are competing with the walleyes and feeding on the fry that the state stocks.

I had to laugh last year when one cabin owner on the lake told me that he and others now refer to Enemy Swim as Empty Swim. While the lake is no longer a good walleye fishery, big bluegills and crappies are abundant.

It is a fact that when you are catching bass on live bait, some of them will be hooked deeply, even if you try to set the hook immediately. When that happens, you must cut your line and leave your hook in the fish. Most of these fish will recover without problems.

An example of just how aggressive schooled up, late-fall smallies are is that Cory broke off three fish before he switched to heavier line. We later caught every one of those fish which were dragging his hook and snell.

Most of the fish we caught were on top of the rock pile, but as the season wears on these fish will drop deeper and deeper. It was interesting to note that the fish we caught on top of the rockpile were dark colored while those taken in deep water were pale. I'm not sure why that is because there is less light in deep water. Put a smallie in a dark livewell and he will burst forth in color and bold markings. Oh, well.

For a fishing report on Waubay area, contact Cory at (605) 929-3894 or visit his web site at www.Waubaylakeguideservice.com

The bass will continue to bite well for the next week or two. Even after the lakes freeze over, smallmouth can be caught if you can locate the schools.

But now is the best time. If you know of a smallmouth lake, go for it.

Late fall is one of the best times of the year to fish for trophy smallmouth bass.