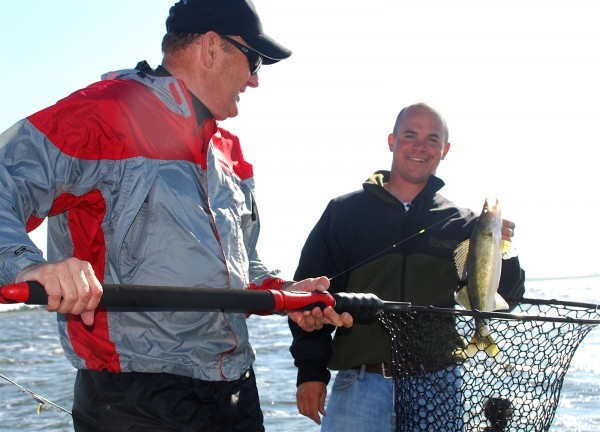 Gary Howey, left, wields the net for Cory Ewing, Waubay Lake Guide Service, on our trip to Bitter Lake. We caught limits of walleyes, several northern pike and a few perch on bottom bouncers and spinners. 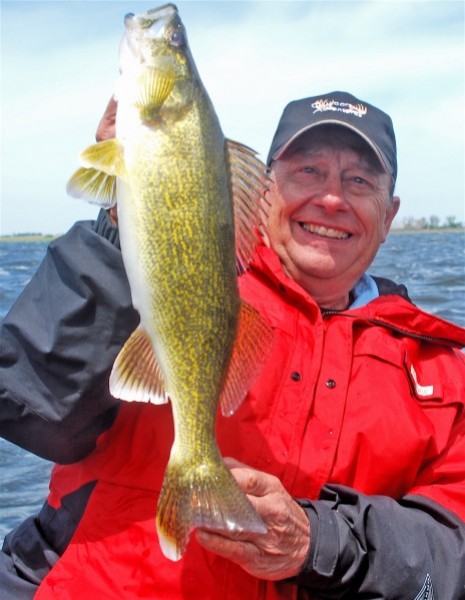 This is one of our better walleyes. We had no trouble filling our four-fish limits with 17 to 19-inch walleyes.

WAUBAY, S.D. | The wind was howling out of the south sending big, rolling whitecaps down the length of Bitter Lake, South Dakota's largest natural body of water.

As Cory Ewing's boat bounced down the waves over 20 feet of water, I couldn't help but think about the irony of this situation. In the late 1980s, Bitter Lake was a slough, barely 2,000 acres in size with water depth of maybe 2 feet. Then, in the mid 90s heavy rains and snow caused the basin to swell to more than 3,500 acres. And it just kept growing.

Today, it's more than 19,000 acres. And when it comes to walleye, perch and northerns, well, the fishing just doesn't get much better elsewhere.

Gary Howey, producer/host of Outdoorsmen Adventures television, and his cameraman Scott Ulrich, both of Hartington, Neb., were hanging on as the bow slapped into every wave with a resounding crash.

It was about a seven-mile run to where we wanted to fish. When we got there, I checked my molars to make sure they were all still in place. Actually, it wasn't that bad, but you have to have fun.

We attached bottom bouncers to our rods, added a snelled, two-hook rig spinner and added a night crawler. With the sea anchor out to slow our drift, Cory sat in the bow correcting our drift with the electric motor.

The depth finder told us we were drifting from one to one-and-a-half mile an hour, which was just right, and there were plenty of fish below us, most of them up in the water column a foot or two.

Cory scored first with a fat, 2-pound walleye. Gary added another and we were off.

Each drift resulted in a fish or two, nothing big, just the good-sized eaters this lake is noted for.

Occasionally someone would bring in a nice perch.

Bitter has a good reputation for really huge perch, but it is primarily a winter fishery. Our friend, Don Fjerstad, outdoors director of KWAT radio in Watertown, S.D., broke the South Dakota state record mark with a 2-pound, 11-ounce catch in, if I remember correctly, 2003. That mark didn't last long, it was broken the next year with a catch one ounce bigger. During those times, it was estimated more 100 perch 2 pounds or better came from the lake in one year.

Any time you have a lake that is increasing in size, you will have good northern pike fishing and Bitter Lake is no different. It holds a strong population of northerns. We caught several and were bitten off by several more that ranged from about 4 to 8 pounds.

Northerns spawn on flooded vegetation so each year the lake is a little bigger, good spawning conditions are found.

There didn't seem to be much of a pattern for the walleyes. Cory's hammered brass spinner blade did well, but so too did other colors we used.

We released several of the larger walleyes and turned back a few that were under the lake's 16-minimum size limit.

By mid afternoon, it was obvious the wind was getting stronger and the 3- and 4-foot rollers were becoming more common. With a limit in the livewell, we decided to head in and fish another day.

The day before the Bitter Lake trip, we checked out a private lake north of Webster where Cory and only five other fisherman have permission to fish. We had been there last year and had excellent walleye fishing. This time was no different.

Casting crankbaits to the shoreline was the pattern and Gary and Cory hurled Shad Raps in perch colors to catch a lot of fish. I chose to fling my 4-inch ringworms on a quarter-ounce lead head. A ringworm in perch colors seemed to work best.

Right now is a good time to take a trip to this region. The walleyes are biting well and will continue to do so. This spring has been windy, even more windy than most years. But there are plenty of fish and they are found all around the lakes right now. You don't have to fish on the windy side to be successful.

Gary Howey, left, wields the net for Cory Ewing, Waubay Lake Guide Service, on our trip to Bitter Lake. We caught limits of walleyes, several northern pike and a few perch on bottom bouncers and spinners.

This is one of our better walleyes. We had no trouble filling our four-fish limits with 17 to 19-inch walleyes.