SIOUX CITY -- A violent line of storms that raced through Siouxland Thursday night has been classified as a derecho by the National Weather Service in Sioux Falls.

Derechos are associated with fast-moving, severe thunderstorms that can cause hurricanic or tornadic-force winds, actual tornadoes, heavy rains and flash floods.

Matthew Meyers, a meteorologist with the NWS in Sioux Falls, said damaging winds, rains and hail were reported throughout the Midwest, with the most severe damage occurring in a corridor from eastern Nebraska, eastern South Dakota and Northwest Iowa.

The destructive winds also kicked up towering walls of dust. Such brown clouds -- reminiscent of ones produced in the Dust Bowl days of the 1930s -- can fall under the classification of a "haboob."

After analyzing the data, the NWS ruled out the occurrence of a haboob, which are rare in the Midwest. The complex storm system can bring winds between 65 to 85 mph.

Little Rock, Iowa had a wind gust of 80 mph, while Sheldon, Iowa reported winds as high as 69 mph. Parts of eastern South Dakota had winds between 70 to 100 mph.

"It did produce severe damage in places," Meyers said.

That was because the storm came in waves, beginning at around 5 p.m. when the first storm system moved through Sioux City. Sirens also sounded at 6:30 p.m. and, shortly after 7 p.m.

The fast-moving storms also left many Siouxland residents without power for a period. In Sioux City, nearly 1,000 customers were without power, according to MidAmerican Energy.

The skies cleared by Friday morning, with highs near 80 and westerly winds of 5-15 mph.

The weekend also seems calm, with highs in the 70s on both Saturday and Sunday and an overnight low of around 50.

"There will be a chance for rain on Saturday night and Sunday morning," Meyers said. "But they won't be anywhere close to the storms we experienced on Thursday."

WATCH NOW: Storm overturns semi on I-29 near Spink

Wrecker crews work to overturn a semi that was blown over in strong winds on I-19 South of Spink, South Dakota

Per the release, residents can place tree limbs in the public right of way for the cleanup effort. "City Staff will not enter private property to clear tree limbs," the release said. 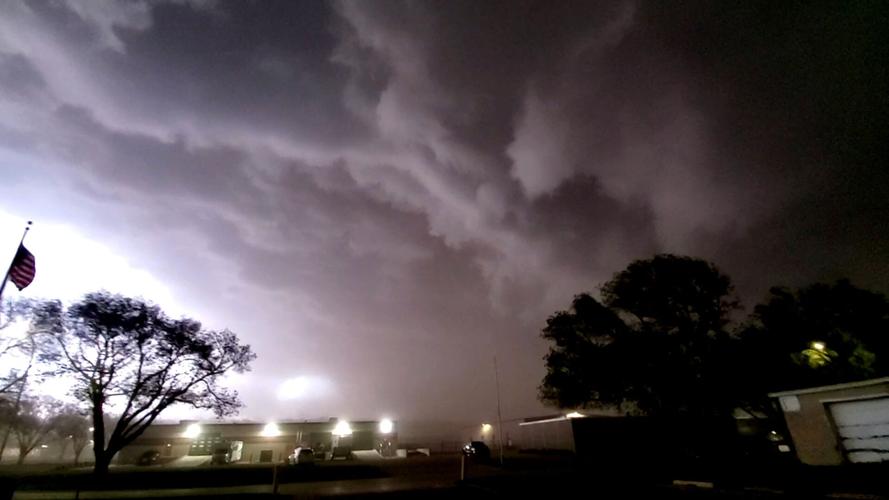 Wind gusts caused a massive dust cloud over Lexington, Neb. on Thursday. Similar winds were reported throughout the Midwest, with most of the damage occurring in Eastern Nebraska, Eastern South Dakota and Northwest Iowa.