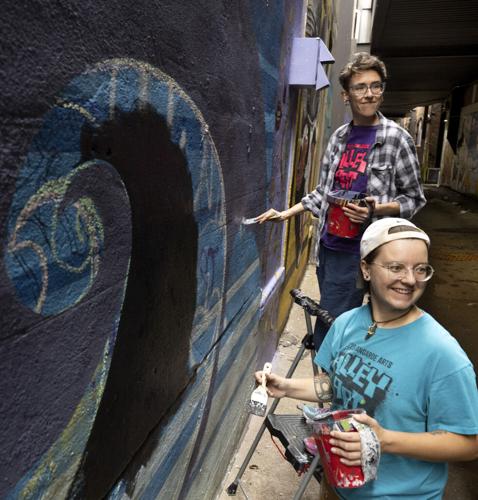 Jessica Hammond, front, who paints under the name of Brutal Doodles, and Kitty Hart. who paints under the of Kitty Kitty Bang Bang, pause to talk with a passer by while work on a mural. Mural, by many artists, may be found in alleyways on Fourth and Fifth streets by Nebraska and Pierce streets. 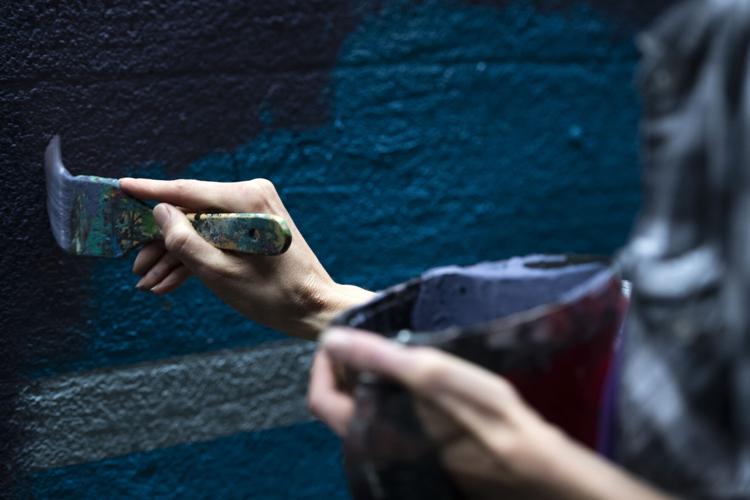 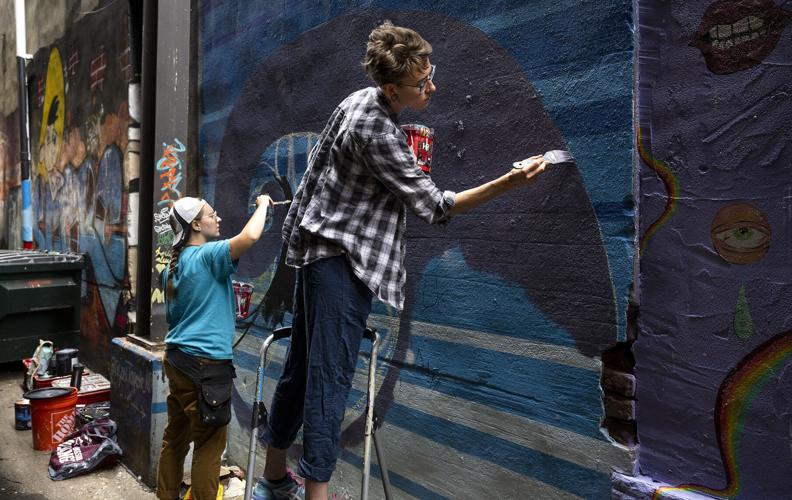 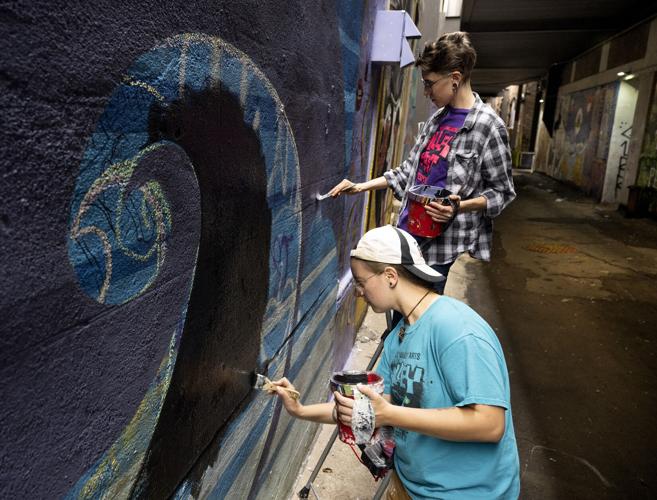 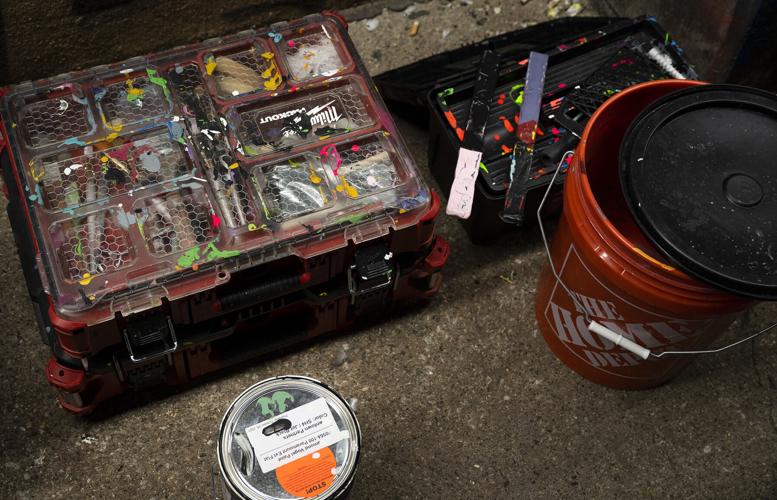 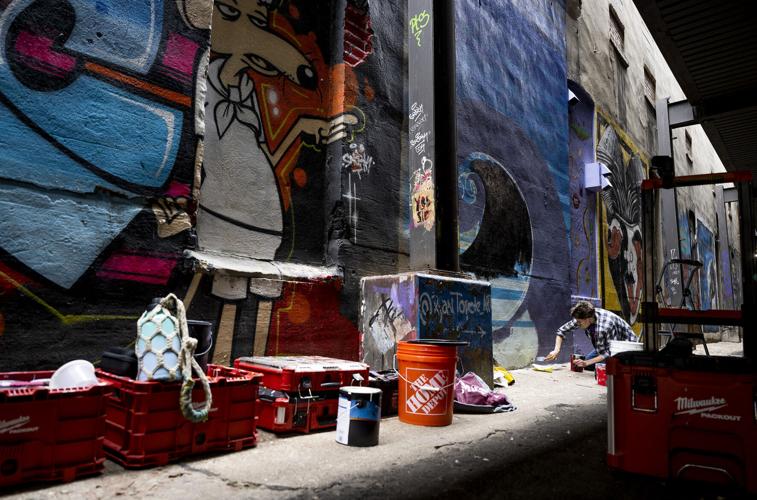 Can you surf in space?

Jessica Hammond sure as heck hopes so.

The Sioux City-based artist, who goes by the name "Brutal Doodles," was designing an outdoor mural depicting a bubble-blowing astronaut surfing intergalactic waves.

"Spaceman Steve will be hanging 10," Hammond said of the cartoon-y space cadet who is often spotted in her large-scale art.

Hammond doesn't mind getting a few double-takes when it comes to colorful wall art. Indeed, many of her best-known pieces can be found in downtown alleyways.

She and her fellow artist Kitty Hart (aka "Kitty Kitty Bang Bang") were among the people who founded the Alley Art Festival.

Now in its fourth year, the Alley Art Festival -- a partnership between Vangarde Arts, Downtown Partners and area artists -- was created to reinvent urban spaces with art as part of an ongoing effort to enhance walkability between the Historic Fourth Street and the Historic Pearl Street Districts.

This year's event will take place from 11 a.m. to 11 p.m. Sept. 24 in the alleyways between Fourth and Fifth streets on Nebraska and Pierce streets.

"We'll have 50 new murals being painted with 34 first-time artists," Vangarde Arts' Brent Stockton said. "In addition to Siouxland artists, we'll also have artists from as far away as Omaha and Sioux Falls participating."

That's a big step up from the festival's humble beginning when critics couldn't differentiate between street art and graffiti.

"Even though it may look random, one of our alleyway pieces can take more than a month to complete," Hammond said. "Sometimes, longer."

Sometimes, Alley Art murals can inspire others to add their two cents. Oh wait, no. Green is merely painting over profane graffiti which marred one of her efforts.

"Well, it is an actual alleyway," she said with a shrug. "People are bound to leave their mark, in both a good or a bad way."

Green has created eight or nine wall murals over the years. Hammond has produced more than 20.

"This is my calling card," she said, looking around the alley. "And I've been able to commission a lot of outside art based on what I've done here."

In fact, Hammond knows the downtown murals have become a popular backdrop for wedding and high school senior photos.

Stockton said that has been an unexpected plus for the festival.

"It's been a selling point for downtown," he explained. "Out-of-towners, staying at any of the hotels, can simply walk a few blocks and see some incredible art."

"Also, since we do have alley murals by the artist entrance at the Orpheum Theatre, we've have performers who've been impressed by what Sioux City has to offer," Stockton continued.

Hammond, on the other hand, is happy that there is an audience for outdoor art.

"While art galleries are nice, they can be a bit formal or, even, somewhat intimidating for some people," she said. "Seeing art on a downtown street is very accessible. Increasingly, it is becoming a quality-of-life benefit."

Which is why events like the Alley Art Festival have become so important.

"Every artist can't get an art show but they can certainly try their hand on a brick wall in an alley," Stockton said. "We love it when new artists bring their talents to Alley Art."

Stockton is also encouraged that the event has evolved into a full-fledged festival, complete with an arts and craft fair, kid's zone, community wall, food truck and beer garden.

"We also have plenty of entertainment," he explained. "In addition to are bands like Banana Cramps and Artificial Stars, nationally known blues rock guitarist Shannon Curfman will be playing our main stage."

Yet the highlight will continue to be the incredible, one-of-a-kind wall murals produced by creative artists like Green.

"Over the years, I've become pretty savvy when it comes to picking spaces," she said. "You want the places where paint will stick without much effort. It becomes a chore painting the same section over and over again."

Hammond is fine with the knowledge that Spaceman Steve can continue to be ubiquitous presence around town.

"Steve's a surfer this year," she said. "Who knows what he'll be doing next year."

WHERE: Alleyway between Fourth and Fifth Streets on Nebraska and Pierce Streets

ADMISSION: $5 at the gate

Artist Jessica Hammond talks about the upcoming Alley Art Festival while working on her mural with fellow artist Kitty Hart. The annual celebr…

"It is our plan to offer a mix of local talent and national touring artists," Vangarde Arts Director Brent Stockton said of the free Cook Park music series it's looking to bring in 2023.

There will be 20 available spots for anyone to belt out their best karaoke on the Anthem stage. Q102 Radio's Moose and Google will determine which top three winners will receive up to $500 in best individual and group/duo categories.

A veteran musician will be remembered at a special band jam, beginning at 3 p.m. Saturday, at The Old Brass Rail, 601 Pearl St.

Sketched in: A new mural goes up in Sioux City

The finished mural will face Hamilton Boulevard and includes depictions of Estrellas de Jalisco, a local dance group. Manzanares, a native of Mexico who lives in Omaha, said he expects to have the mural completed in approximately two weeks.

Jessica Hammond, front, who paints under the name of Brutal Doodles, and Kitty Hart. who paints under the of Kitty Kitty Bang Bang, pause to talk with a passer by while work on a mural. Mural, by many artists, may be found in alleyways on Fourth and Fifth streets by Nebraska and Pierce streets.